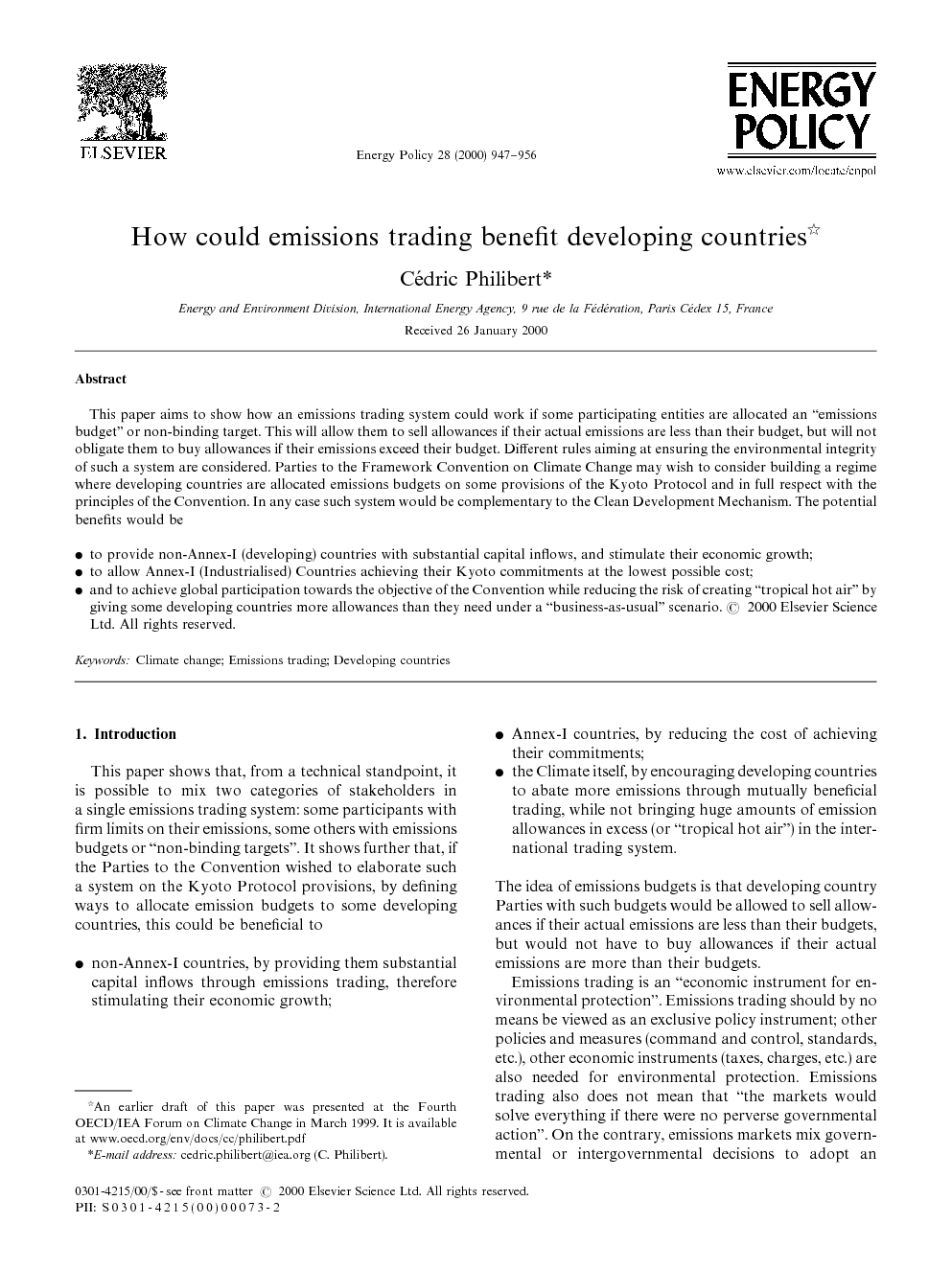 This paper aims to show how an emissions trading system could work if some participating entities are allocated an “emissions budget” or non-binding target. This will allow them to sell allowances if their actual emissions are less than their budget, but will not obligate them to buy allowances if their emissions exceed their budget. Different rules aiming at ensuring the environmental integrity of such a system are considered. Parties to the Framework Convention on Climate Change may wish to consider building a regime where developing countries are allocated emissions budgets on some provisions of the Kyoto Protocol and in full respect with the principles of the Convention. In any case such system would be complementary to the Clean Development Mechanism. The potential benefits would be • to provide non-Annex-I (developing) countries with substantial capital inflows, and stimulate their economic growth; • to allow Annex-I (Industrialised) Countries achieving their Kyoto commitments at the lowest possible cost; • and to achieve global participation towards the objective of the Convention while reducing the risk of creating “tropical hot air” by giving some developing countries more allowances than they need under a “business-as-usual” scenario.

This paper shows that, from a technical standpoint, it is possible to mix two categories of stakeholders in a single emissions trading system: some participants with firm limits on their emissions, some others with emissions budgets or “non-binding targets”. It shows further that, if the Parties to the Convention wished to elaborate such a system on the Kyoto Protocol provisions, by defining ways to allocate emission budgets to some developing countries, this could be beneficial to • non-Annex-I countries, by providing them substantial capital inflows through emissions trading, therefore stimulating their economic growth; • Annex-I countries, by reducing the cost of achieving their commitments; • the Climate itself, by encouraging developing countries to abate more emissions through mutually beneficial trading, while not bringing huge amounts of emission allowances in excess (or “tropical hot air”) in the international trading system. The idea of emissions budgets is that developing country Parties with such budgets would be allowed to sell allowances if their actual emissions are less than their budgets, but would not have to buy allowances if their actual emissions are more than their budgets. Emissions trading is an “economic instrument for environmental protection”. Emissions trading should by no means be viewed as an exclusive policy instrument; other policies and measures (command and control, standards, etc.), other economic instruments (taxes, charges, etc.) are also needed for environmental protection. Emissions trading also does not mean that “the markets would solve everything if there were no perverse governmental action”. On the contrary, emissions markets mix governmental or intergovernmental decisions to adopt an environmental objective, and the market's forces to allow societies reach the objective at the lowest possible cost. Economic instruments allow us to reach a given environmental objective at a lower cost, or to achieve a better environmental performance at a given cost. Lowering the cost of achieving a given environmental objective will save scarce resources, which can be used for other urgent needs, especially in developing countries. Enhancing the environmental performance at a given cost is our responsibility to those who suffer the most from a damaged environment: the poor, and the future generations. The development and implementation of sound economic instruments for environmental protection is the cornerstone of sustainable development — which is nothing more than reconciling economic development and the environment. As Climate Change is one of the most important environmental threats today, one must devote all efforts to build an efficient, cost-effective international regime to face this threat through mitigation and adaptation, upon the provisions of the Kyoto Protocol which have been agreed to by all Parties. This can only be done by accepting the principle of “common, but differentiated responsibilities” of the different countries of the World that has been established by the Framework Convention on Climate Change. In this paper, we first examine how developing countries could become involved in emissions trading while not taking on any new commitments, through the definition of “emissions budgets” and look at this option in relation to the Clean Development Mechanism (Section 2). We further examine how such emissions budgets could be negotiated for developing countries (Section 3). We then look at some legal issues involved in building such a system under the provisions of the Kyoto Protocol (Section 4). We finally devote some considerations to the relationship between negotiating emission budgets for developing countries and the question of “supplementarity” (Section 5).

Involving developing countries in emissions trading through the negotiation of emission budgets would provide them substantial capital inflows through emissions trading, therefore stimulating their economic growth. It would also allow the World to take advantage of the fact that most of them are building their infrastructure, which would determine long-term paths of greenhouse gas emissions. This would be fully in-line with the provisions under the Convention that “the global nature of climate change calls for the widest possible co-operation by all countries and their participation in an effective and appropriate international response, in accordance with their common but differentiated responsibilities and respective capabilities and their social and economic conditions”.