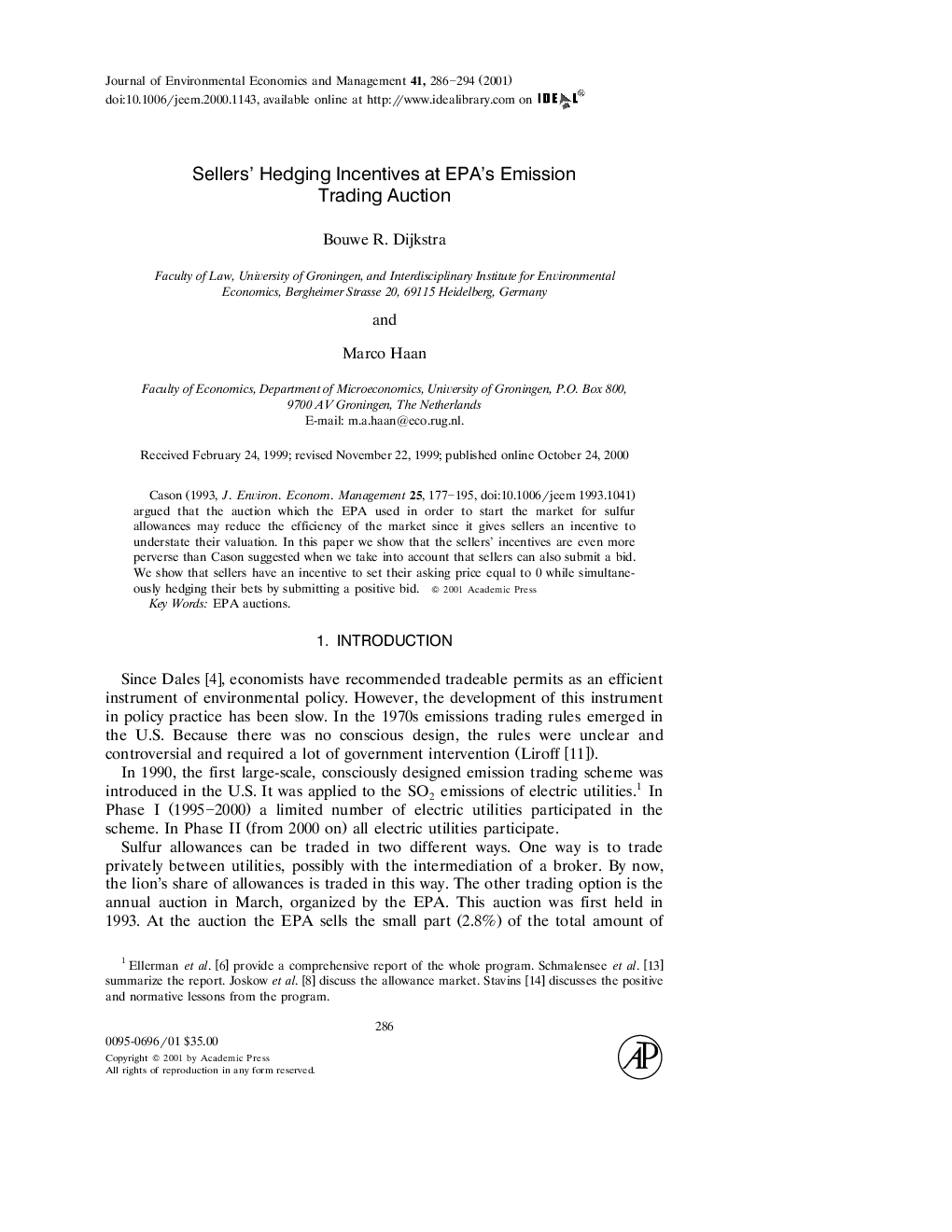 Cason (1993, J. Environ. Econom. Management25, 177–195, doi:10.1006/jeem 1993.1041) argued that the auction which the EPA used in order to start the market for sulfur allowances may reduce the efficiency of the market since it gives sellers an incentive to understate their valuation. In this paper we show that the sellers' incentives are even more perverse than Cason suggested when we take into account that sellers can also submit a bid. We show that sellers have an incentive to set their asking price equal to 0 while simultaneously hedging their bets by submitting a positive bid.

Cason 1 argued that the auction which the EPA used to start the market for sulfur allowances can lead to inefficient market outcomes. The setup of the auction gives both buyers and sellers an incentive to understate their valuation of an allowance. Therefore, equilibrium prices are too low, which leads to biased signals and reduces the efficiency of the allowance trading market. In this paper we showed that the incentives in this auction may be even more perverse than Cason suggested. In particular, we showed that sellers have an incentive to set their asking price equal to 0 while simultaneously hedging their bets by submitting a positive bid. We were not able to find the Bayesian Nash equilibrium in this auction when this possibility is taken into account. What we do know is that if an equilibrium exists sellers either set only a positive asking price, or set an asking price equal to 0 and submit a positive bid as well. As far as we know, no one has ever simultaneously submitted an asking price and a bid at the EPA auction yet: The EPA does not release the names of those who offer allowances for sale at the auction. However, even if we had this information we would face the problem that many participants use trade names or act through brokers to hide their identity. We also could not find evidence of sellers actually submitting an asking price of 0 in these auctions. Yet we do not believe there is anything in the institutional framework of these auctions that restricts sellers from following our strategy. The strategy we suggest has not been discussed in the literature about the EPA auction. Also, other literature on auctions does not study the possibility. The latter is probably due to the fact that such a strategy is only profitable in a peculiar setup like that of the EPA auction. We now know that the EPA auction was a failure, in the sense that hardly any private parties sold allowances at the auctions. As a result, it took several years before an efficient market in sulfur allowances developed. Cason 1 already predicted difficulties, arguing that equilibrium prices at the auction would be too low, making the market inefficient. Our analysis shows that when sellers can also submit bid prices their incentives in the auction are even more perverse and their optimal strategies even harder to determine, thus shedding even more doubt on the efficiency of such an auction. Therefore, it does not come as a surprise thatpotential sellers preferred to bypass the auctions altogether and waited for an efficient market to develop.