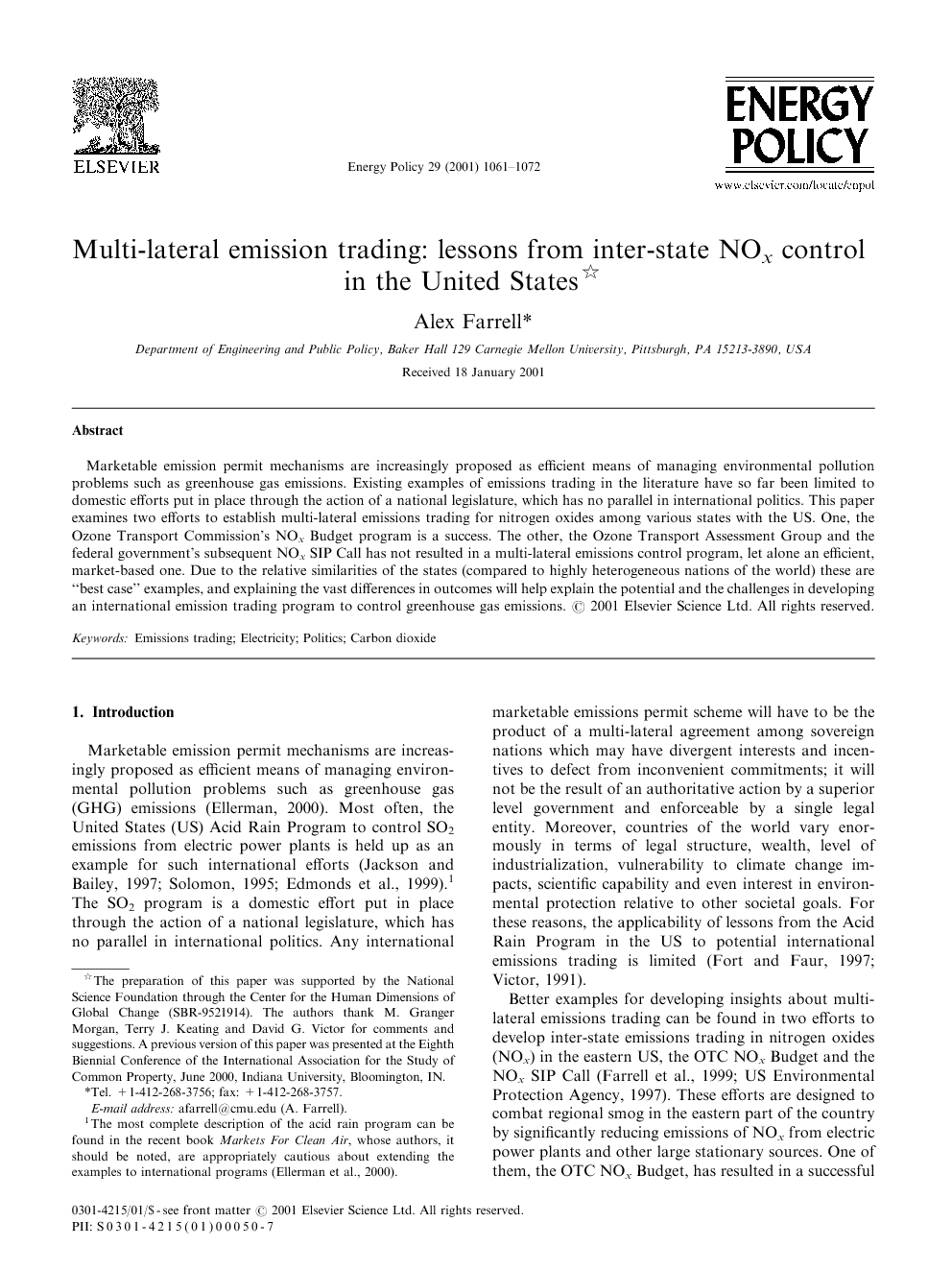 Marketable emission permit mechanisms are increasingly proposed as efficient means of managing environmental pollution problems such as greenhouse gas emissions. Existing examples of emissions trading in the literature have so far been limited to domestic efforts put in place through the action of a national legislature, which has no parallel in international politics. This paper examines two efforts to establish multi-lateral emissions trading for nitrogen oxides among various states with the US. One, the Ozone Transport Commission's NOx Budget program is a success. The other, the Ozone Transport Assessment Group and the federal government's subsequent NOx SIP Call has not resulted in a multi-lateral emissions control program, let alone an efficient, market-based one. Due to the relative similarities of the states (compared to highly heterogeneous nations of the world) these are “best case” examples, and explaining the vast differences in outcomes will help explain the potential and the challenges in developing an international emission trading program to control greenhouse gas emissions.

Marketable emission permit mechanisms are increasingly proposed as efficient means of managing environmental pollution problems such as greenhouse gas (GHG) emissions (Ellerman, 2000). Most often, the United States (US) Acid Rain Program to control SO2 emissions from electric power plants is held up as an example for such international efforts (Jackson and Bailey, 1997; Solomon, 1995; Edmonds et al., 1999).1 The SO2 program is a domestic effort put in place through the action of a national legislature, which has no parallel in international politics. Any international marketable emissions permit scheme will have to be the product of a multi-lateral agreement among sovereign nations which may have divergent interests and incentives to defect from inconvenient commitments; it will not be the result of an authoritative action by a superior level government and enforceable by a single legal entity. Moreover, countries of the world vary enormously in terms of legal structure, wealth, level of industrialization, vulnerability to climate change impacts, scientific capability and even interest in environmental protection relative to other societal goals. For these reasons, the applicability of lessons from the Acid Rain Program in the US to potential international emissions trading is limited (Fort and Faur, 1997; Victor, 1991). Better examples for developing insights about multi-lateral emissions trading can be found in two efforts to develop inter-state emissions trading in nitrogen oxides (NOx) in the eastern US, the OTC NOx Budget and the NOx SIP Call (Farrell et al., 1999; US Environmental Protection Agency, 1997). These efforts are designed to combat regional smog in the eastern part of the country by significantly reducing emissions of NOx from electric power plants and other large stationary sources. One of them, the OTC NOx Budget, has resulted in a successful emissions trading system that has been in place for two years while the other, the NOx SIP Call has been plagued with problems and may never be implemented (Farrell, 2000; US Court of Appeals—District of Columbia, 2000). Further, both had a technical assessment effort that ran parallel to the political negotiations, just as international environmental agreements often do (Keating and Farrell, 1999; Miller, 1999; Jaeger, van Eijndhoven, and Clark, 2001; Castells and Funtowicz, 1997). Most importantly, both examples involved efforts of somewhat heterogeneous and relatively independent political jurisdictions to negotiate a joint agreement on emissions trading that each implemented through state laws and regulations, although they are still imperfect analogs to international applications. The remainder of this paper is laid out as follows. The next section briefly describes emissions trading and the regulation of NOx emissions in the US, providing the context for the two examples. The third section describes the OTC NOx Budget and the NOx SIP Call in detail, including the steps that led up to their creation. The fourth section contains observations of these two processes that are relevant to other multi-lateral emissions trading applications. The fifth section contains conclusions.

This paper presents evidence that multi-lateral emissions trading is possible. The key elements are a common belief among the different jurisdictions that emissions control is needed and a formal structure in which coordinated analysis and policy can be developed. Nonetheless, crafting multi-lateral emissions trading, even in a best-case scenario, is exceedingly difficult; it requires solving the institutional, resource allocation and coordination problems described above. The prospects for further progress on multi-lateral emissions trading in the United States may be limited, since it is quite rare for a large number of states to have similar enough interests to meet the first necessary condition. Even if the EPA is eventually successful in forcing a large-scale NOx control program through the SIP process, it is not at all clear that this process will meet the second necessary condition. Surprisingly, the prospects may be brighter internationally, as many different countries have come to see regional and global environmental issues as a common threat, and many routes for international cooperation on environmental science and policy now exist. The history of international agreements shows quite clearly that effective regimes start slowly, in areas as divergent as environmental protection and trade. International trade agreements, arguably the most successful international regime to date, grew and evolved over time, adding new countries and new goods slowly, carefully resolving conflicts between national interests (Jacoby et al., 1998). Developing countries often received special phase-in arrangements and even perpetual opt-outs of the most demanding requirements. It is a powerful agreement, but it took 50 years of hard work. Thus, there is absolutely no need to assume that comprehensive top-down international GHG emissions control programs that involve significant binding commitments are the only way to develop an effective and efficient GHG reduction strategy, as embodied in the Kyoto Protocol. Indeed, such approaches will almost certainly fail, since in the near term key countries such as the US, China and India will not agree to participate. A bottom-up strategy may be best if the diplomatic community can work out ways to encourage the growth of local and regional regimes, and encourage their coordination so that ultimately they can coalesce into a set of global arrangements that encompass all major states (Morgan, 2000). The success of the OTC NOx Budget suggests GHG emissions trading can be part of such an effort, bringing potentially large cost savings and some important countries to the table (such as the United States). The failure of the NOx SIP Call, however, indicates how difficult creating a bottom-up emission trading can be. But given the absence of any overarching authority at the international level, it may offer the world's best hope for evolving serious management of global GHG emissions.