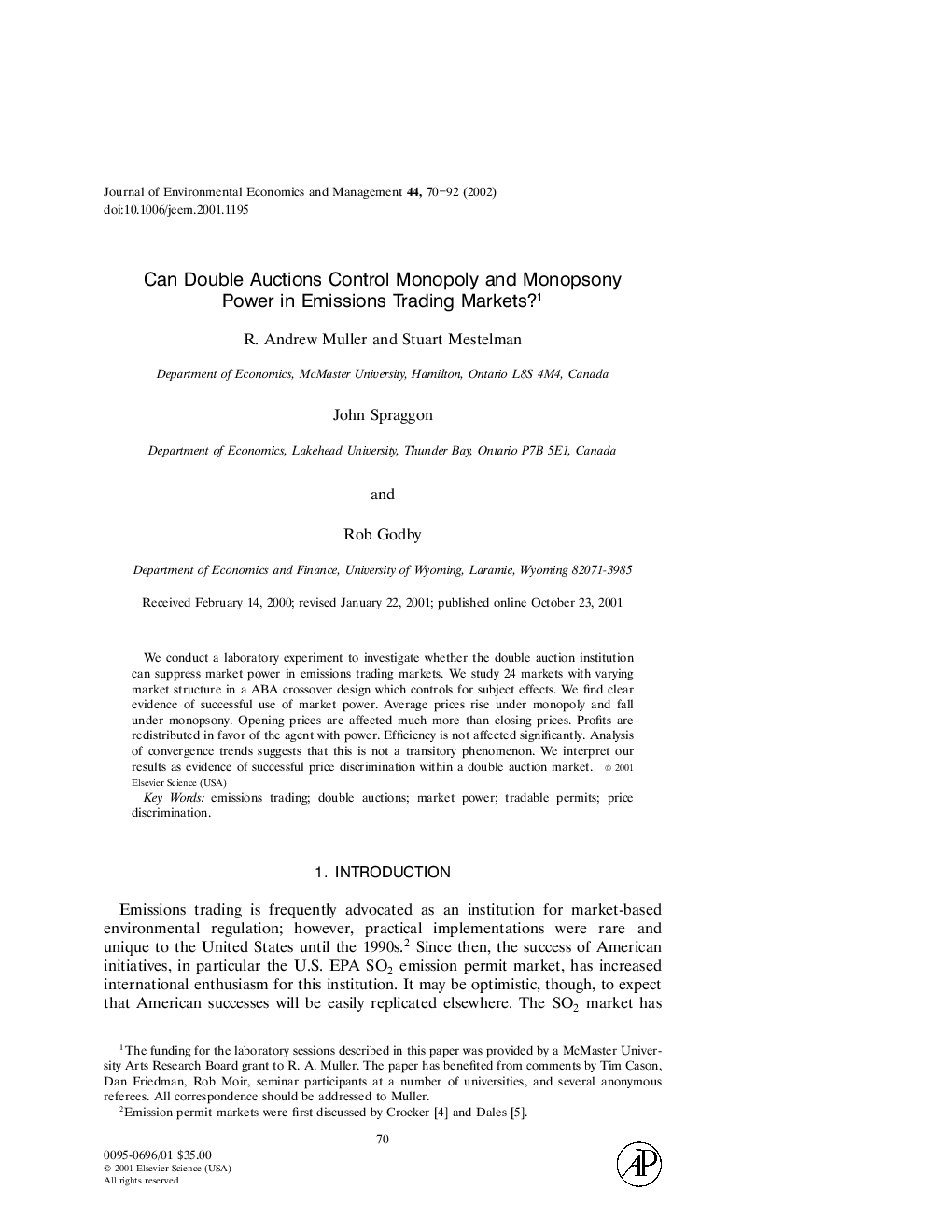 We conduct a laboratory experiment to investigate whether the double auction institution can suppress market power in emissions trading markets. We study 24 markets with varying market structure in a ABA crossover design which controls for subject effects. We find clear evidence of successful use of market power. Average prices rise under monopoly and fall under monopsony. Opening prices are affected much more than closing prices. Profits are redistributed in favor of the agent with power. Efficiency is not affected significantly. Analysis of convergence trends suggests that this is not a transitory phenomenon. We interpret our results as evidence of successful price discrimination within a double auction market.

Our results clearly establish that both monopoly and monopsony subjects were able to manipulate prices to their advantage despite any limitations placed on themby the double auction institution. This is not a transient effect which is eliminated with experience. We confirmed this by estimating the asymptotic median price for each market and testing for treatment and market effects. The insignificant effect of market structure on efficiency and the relatively small constraint on net purchases, together with the observed price patterns, strongly suggest that efficiency losses were mitigated by price discrimination. As a result, subjects with market power were able to increase their share of the profits substan- tially (relative to the competitive environments) without greatly harming efficiency. The sustained spread between median and closing prices in the convergence anal- ysis suggests that subjects with market power were systematically able to practice price discrimination. Our experiment differed from those of Brown-Kruse et al. [3], Smith [22], and Smith and Williams [23] because our subjects could trade on both sides of the mar- ket. It differed from that of Ledyard and Szakaly-Moore [13] because it considered both monopsony and monopoly power. It differed from all previous research in thearea because it included a competitive baseline against which the effect of market power could be measured and because it included more monopoly and monopsony markets than any of the others. Our results generally confirm the findings of Brown-Kruse et al. [3], Godby [7–9], and Ledyard and Szakaly-Moore [13], all of which present evidence that double auctions provide an ineffective constraint on market power. Unlike Godby [7–9], however, we find very little evidence of asymmetry between monopolists and monop- sonists. Our results exhibit a stronger effect of market power in double auctions than was observed in most previous work. Table XII compares the price results across our experiment and five predecessors. To allow for the possibility of conver- gence to competitive equilibrium in a session we examine only the mean prices in the last periods reported (we shift from median prices here because the data from other experiments are described this way). In the present experiment, monopolists achieved 55% of the potential price increase while our monopsonists achieved 65% of the potential price declines. The monopolists were more successful than thosein previous experiments (particularly those of Godby, for whom the introduction of agents who could work both sides of the market led to a reduction in the ability to exert market power). The monopsonists were somewhat less successful in com- parison. Particularly noteworthy, however, is the success of the monopolists, which suggests that Godby’s results may be anomalous. Our finding that price discrimination can persist in a double auction when all prices are public information challenges the hypothesis, suggested by Smith [22], that buyers’ resistance to high prices is increased once the monopolist reveals him- self prepared to sell at lower prices. A possible explanation of this difference may lie in the nature of our markets. Unlike those in Smith’s experiments, our markets allowed speculative activity which, combined with the changing market “fundamen- tals” associated with within-session treatment changes, could have created an envi- ronment in which it was easier for price discrimination to persist. Because naturally occurring emissions markets would also be characterized by speculative activity and changing market conditions, our results suggest that market-power pricing and price discrimination may be serious problems in the field.Our work has somewhat conflicting implications for emissions trading policy. On the one hand, it suggests that double auction markets for emissions permits can be quite efficient, even when the buying or selling side is highly concentrated. On the other hand, it suggests that agents with market power may be able to use it to capture substantially increased shares of the gains from emissions trading. This may pose a problem in the context of international Greenhouse Gas trading if some countries directly trade their assigned amounts rather than delegating them to domestic entities. This may make negotiations of international trading arrangements more difficult. The problem of market power may be even greater in affecting the political feasibility of regional emissions trading markets in which there are likely to be single buyers.