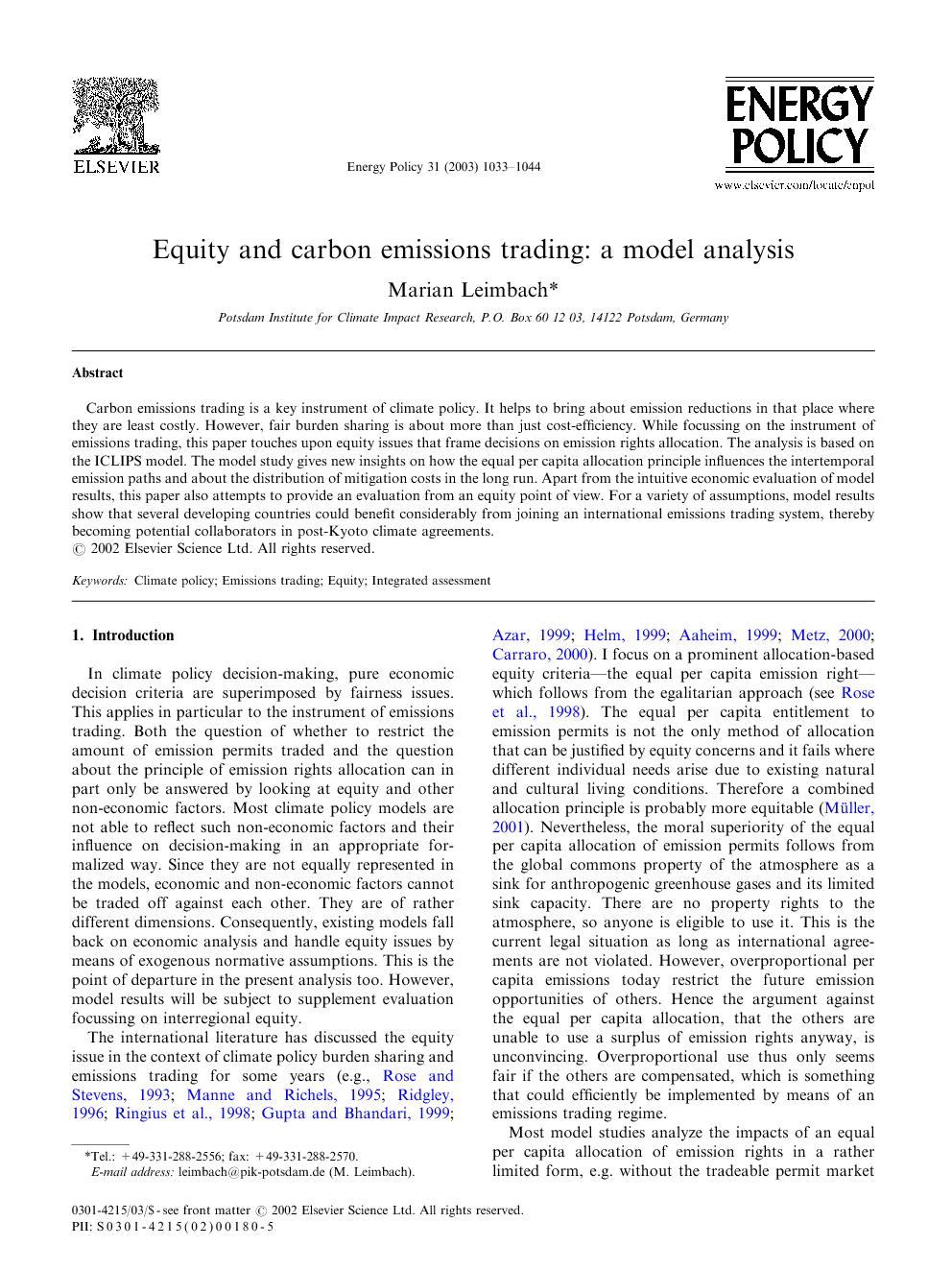 Carbon emissions trading is a key instrument of climate policy. It helps to bring about emission reductions in that place where they are least costly. However, fair burden sharing is about more than just cost-efficiency. While focussing on the instrument of emissions trading, this paper touches upon equity issues that frame decisions on emission rights allocation. The analysis is based on the ICLIPS model. The model study gives new insights on how the equal per capita allocation principle influences the intertemporal emission paths and about the distribution of mitigation costs in the long run. Apart from the intuitive economic evaluation of model results, this paper also attempts to provide an evaluation from an equity point of view. For a variety of assumptions, model results show that several developing countries could benefit considerably from joining an international emissions trading system, thereby becoming potential collaborators in post-Kyoto climate agreements.

In climate policy decision-making, pure economic decision criteria are superimposed by fairness issues. This applies in particular to the instrument of emissions trading. Both the question of whether to restrict the amount of emission permits traded and the question about the principle of emission rights allocation can in part only be answered by looking at equity and other non-economic factors. Most climate policy models are not able to reflect such non-economic factors and their influence on decision-making in an appropriate formalized way. Since they are not equally represented in the models, economic and non-economic factors cannot be traded off against each other. They are of rather different dimensions. Consequently, existing models fall back on economic analysis and handle equity issues by means of exogenous normative assumptions. This is the point of departure in the present analysis too. However, model results will be subject to supplement evaluation focussing on interregional equity. The international literature has discussed the equity issue in the context of climate policy burden sharing and emissions trading for some years (e.g., Rose and Stevens, 1993; Manne and Richels, 1995; Ridgley, 1996; Ringius et al., 1998; Gupta and Bhandari, 1999; Azar, 1999; Helm, 1999; Aaheim, 1999; Metz, 2000; Carraro, 2000). I focus on a prominent allocation-based equity criteria—the equal per capita emission right—which follows from the egalitarian approach (see Rose et al., 1998). The equal per capita entitlement to emission permits is not the only method of allocation that can be justified by equity concerns and it fails where different individual needs arise due to existing natural and cultural living conditions. Therefore a combined allocation principle is probably more equitable (Müller, 2001). Nevertheless, the moral superiority of the equal per capita allocation of emission permits follows from the global commons property of the atmosphere as a sink for anthropogenic greenhouse gases and its limited sink capacity. There are no property rights to the atmosphere, so anyone is eligible to use it. This is the current legal situation as long as international agreements are not violated. However, overproportional per capita emissions today restrict the future emission opportunities of others. Hence the argument against the equal per capita allocation, that the others are unable to use a surplus of emission rights anyway, is unconvincing. Overproportional use thus only seems fair if the others are compensated, which is something that could efficiently be implemented by means of an emissions trading regime. Most model studies analyze the impacts of an equal per capita allocation of emission rights in a rather limited form, e.g. without the tradeable permit market being explicitly modeled (Edmonds et al., 1995) or by fixing the emission reduction targets ex ante, which not only applies for studies that aim to model the consequences of the Kyoto Protocol, but also for studies with a time horizon that goes beyond Kyoto (e.g., Rose et al., 1998; Böhringer and Welsch, 1999). Buonanno et al. (2001), who analyze the impact of emission trade restrictions on equity and efficiency, implement the allocation of emission permits by assuming that the Kyoto targets apply for the whole century. While focusing on long-term climate policies, the model study presented here goes beyond this rather unlikely Kyoto-for-ever scenario. It resembles the ‘contraction and covergence’ approach (Meyer, 2000) and derives the global as well as regional emission reduction targets from the model analyses based on a permit market and on ambitious climate goals. Due to this, I am able to give new insights on how the equal per capita allocation principle influences both the distribution of mitigation costs and intertemporal emission paths (“when flexibility”). Moreover, I will demonstrate the phenomenon of the “equity dent”, which arises under a particular model setting. With a given reduction target and under common assumptions on rationality and competition, model studies yield a market solution according to which all regions have to reduce greenhouse gas emissions up to the point where the marginal abatement costs reach the same level. While neglecting any equity aspects, Nordhaus and Boyer (2000) based their analysis about efficient climate-change policies on an emission rights allocation that follows that market solution (they call it a revenue-neutral allocation). Emissions trading will hardly occur in such a model setting. Above all it implies different reduction amounts (in absolute as well as percentage terms) for each region, while the responsibility of major emitters is not taken into account. It is far from being a realistic option to expect that African countries undergo emission reductions because of their low mitigation costs without any compensation. A differentiated burden sharing as demanded by the Kyoto Protocol is required. Nevertheless, the efficiency potential offered by the market can yet be used thanks to flexible instruments like emissions trading. There are two approaches to starting the emissions trading system. With the first approach, a given amount to emission rights is auctioned, whereas according to the second approach emission rights are allocated on the basis of a fixed allocation rule. While in the second case the discussion is centered around the allocation rule, the same applies to the problem of recycling the revenues from auction in the first case. In the present model, I start with an initial allocation of emission rights. But differently to other studies, I do not derive this allocation from fixed regional emission reduction targets. Only the regions’ share in the pool of emission rights is given. The absolute level of allocated emission rights is endogenously determined.1

I analyzed equity aspects of an emissions trading regime that should help to meet long-term climate goals. The chosen climate window which restrict temperature change to 0.2°C per decade and 2°C over the entire time horizon requires considerable mitigation efforts. Hence, the mitigation costs are somewhat higher than in many other model studies and most comparable with 450 ppm stabilization scenarios (cf. Manne and Richels, 1995). In model experiments I varied the transition time from status quo to equal per capita emission rights allocation. All model runs rely on constrained welfare maximization. While in the case of unrestricted trade, the variation of the allocation rule only affects the distribution of mitigation costs but not the regional and global emission reduction paths, with trade restrictions the latter are affected too. This is although there are only minor differences in the allocation of emission rights between the restricted and the unrestricted cases. The main results can be divided up between those that are intuitively obvious: • long transition phases between status quo and equal per capita allocation of emission rights are less costly, • trade restrictions require stronger reduction efforts in industrial countries in the short-term and those that are either new or the subject of controversial scientific debate: • short transition phases between status quo and equal per capita allocation of emission rights are more equitable, • unrestricted trade is superior from an economic and equity point of view, • trade restrictions may cause a considerable amount of emission rights to remain unused, • emissions trading can significantly change the terms of trade, • imprudently combining equal per capita allocation and trade restrictions, distorts fairness and efficiency (equity dent), • CPA (i.e. China) might become a competitor on the permit market, demanding a huge amount of emission rights. The most important implication with respect to future climate policy can be seen in the potential benefits that several developing countries (e.g. India) may gain from an international emissions trading regime. This of course depends on the general conditions and the specific implementation of such a regime, which includes more than simply deciding how to allocate emission rights. However, a fair distribution of emission rights is likely to provide impetus to international climate policy negotiations, with the advantage that non-Annex-I countries could be involved.