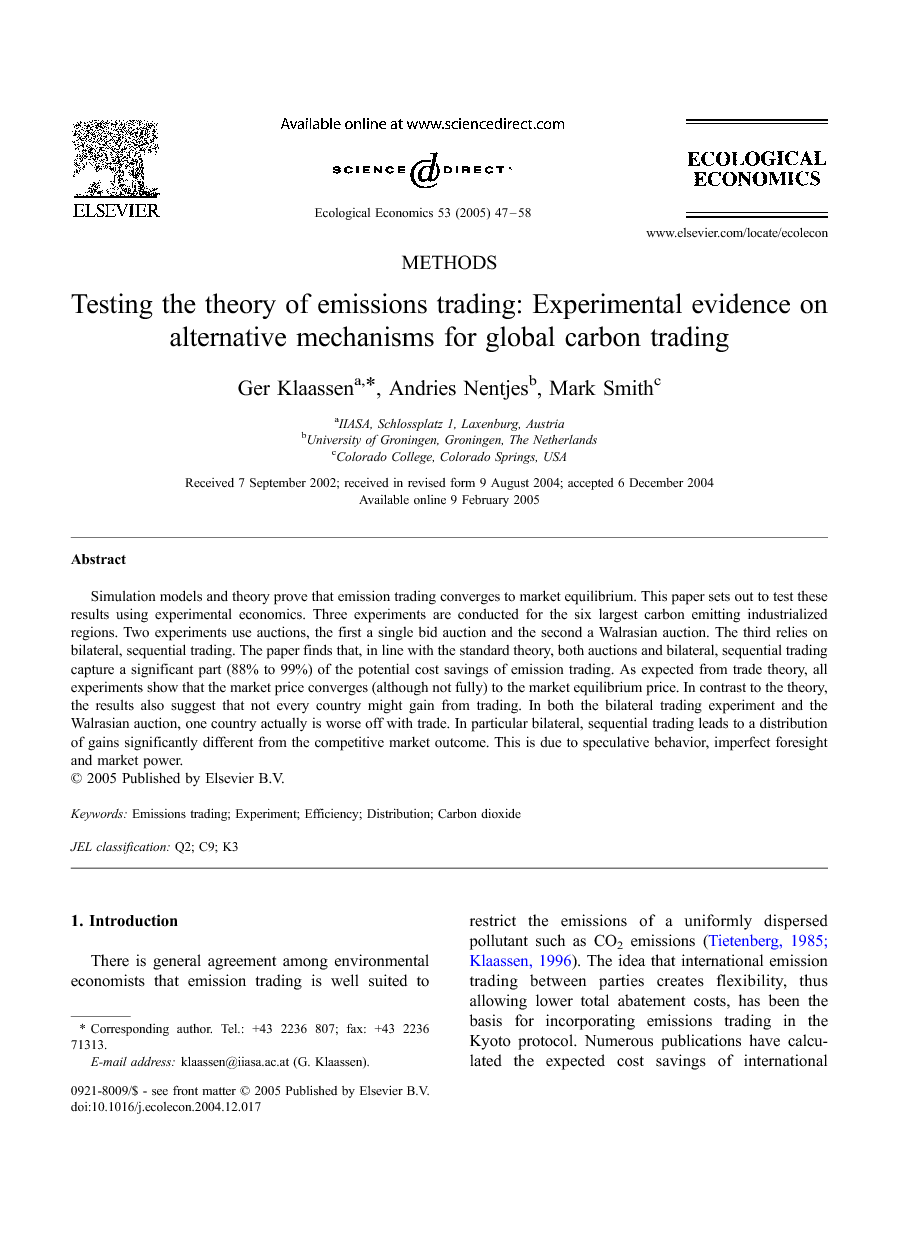 Simulation models and theory prove that emission trading converges to market equilibrium. This paper sets out to test these results using experimental economics. Three experiments are conducted for the six largest carbon emitting industrialized regions. Two experiments use auctions, the first a single bid auction and the second a Walrasian auction. The third relies on bilateral, sequential trading. The paper finds that, in line with the standard theory, both auctions and bilateral, sequential trading capture a significant part (88% to 99%) of the potential cost savings of emission trading. As expected from trade theory, all experiments show that the market price converges (although not fully) to the market equilibrium price. In contrast to the theory, the results also suggest that not every country might gain from trading. In both the bilateral trading experiment and the Walrasian auction, one country actually is worse off with trade. In particular bilateral, sequential trading leads to a distribution of gains significantly different from the competitive market outcome. This is due to speculative behavior, imperfect foresight and market power.

This paper set out to examine the efficiency of bilateral, sequential trading and trading using auctions so as to validate the conjectures of economic theory in a laboratory context. For this purpose, three experiments were run: one using bilateral, sequential trading and two using auctions. The paper finds that, in line with the standard theory, both the auctions and the bilateral, sequential trading (with regular information on average prices) are able to capture a significant part (88 to 99%) of the potential cost savings of emission trading (see Table 10). In contrast to the usual findings, the results also suggest that not every country may gain from trading. Under the bilateral trading regime, each participant realizes substantial savings on control cost, but for some parties total expenditure turned out to be higher than when emission trading is prohibited. This is due to combination of imperfect information, speculative behavior and market power. The losses for one party are reflected in windfall profits for others. Activities such as speculation, collusion and cheating played a role especially in the bilateral trade experiment and in this respect behavior differed from the assumptions in Ermoliev et al. (2000). Yet the prediction that bilateral trade will converge to the cost-effective allocation is supported by the experimental evidence. The single bid auction appears not only to fulfil an important role in achieving the potential efficiency gains from emissions trading but also serves to distribute the gains from emissions trading so that they are closer to the expected equilibrium outcome. The Walrasian auction shows that although the market-clearing price was found quite quickly calculation errors, leading to non-cost minimizing behavior by individual participants, affect the actual total savings on abatement cost and can make parties worse off than they would have been without trading. In spite of this, the distribution of the gains in the Walrasian auction differs less from the perfect equilibrium than the distribution under bilateral, sequential trading. In the theoretical model of Ermoliev et al. (2000), it was assumed that all parties calculate correctly and do not try to affect the market price and therefore the market-clearing price is always the efficient price.Two points of discussion seem to be relevant. First, the fact that the distribution of the gains from bilateral trading differs more from the perfect equilibrium outcome than under the auctions might be relatively robust. Test runs of the bilateral trading scheme showed that the winner gained twice as much as the perfect market solution and the country with the smallest gains gained only 40% of the possible gains. In this case, only 76% of the potential gains were realized. This suggests that the auctions might not only distribute gains more evenly but may also be more efficient. Secondly, market power was also exhibited in the test runs. Russia, CEE and the Ukraine colluded and initially, agreed not to sell below $125/ton C. This strengthens our conclusion that market power is an important factor to take into account when designing the carbon market. We do point out, however, that in reality the number of sellers and buyers might be much larger than in our experiment especially if developing countries such as China and India participate, or permits are traded between companies rather than countries. Thus we may be might exaggerating the threat of market power. The absence of the USA might even increase market power on the demand since the numbers of buyers (EU, Japan, Canada, New Zealand) are fewer and could act as a block. However, in practice this does not seem to occur. We do not think that this affects our major finding that both auctions and bilateral trading are likely to be efficient in practice and that the distribution of the gains might differ significantly from the perfect equilibrium outcome, especially under bilateral trading, due to market power, speculation and imperfect foresight. Our findings indicate that two elements might be crucial for the actual implementation and design of carbon trading schemes. First, auctions not only stimulate efficiency but also equity because price transparency is created. Second, market power is potentially a significant threat; so efforts to limit it by increasing participation of more (developing) countries (cf. Bohm and Carlen, 2002), or individual firms, are relevant for a successful practical implementation.