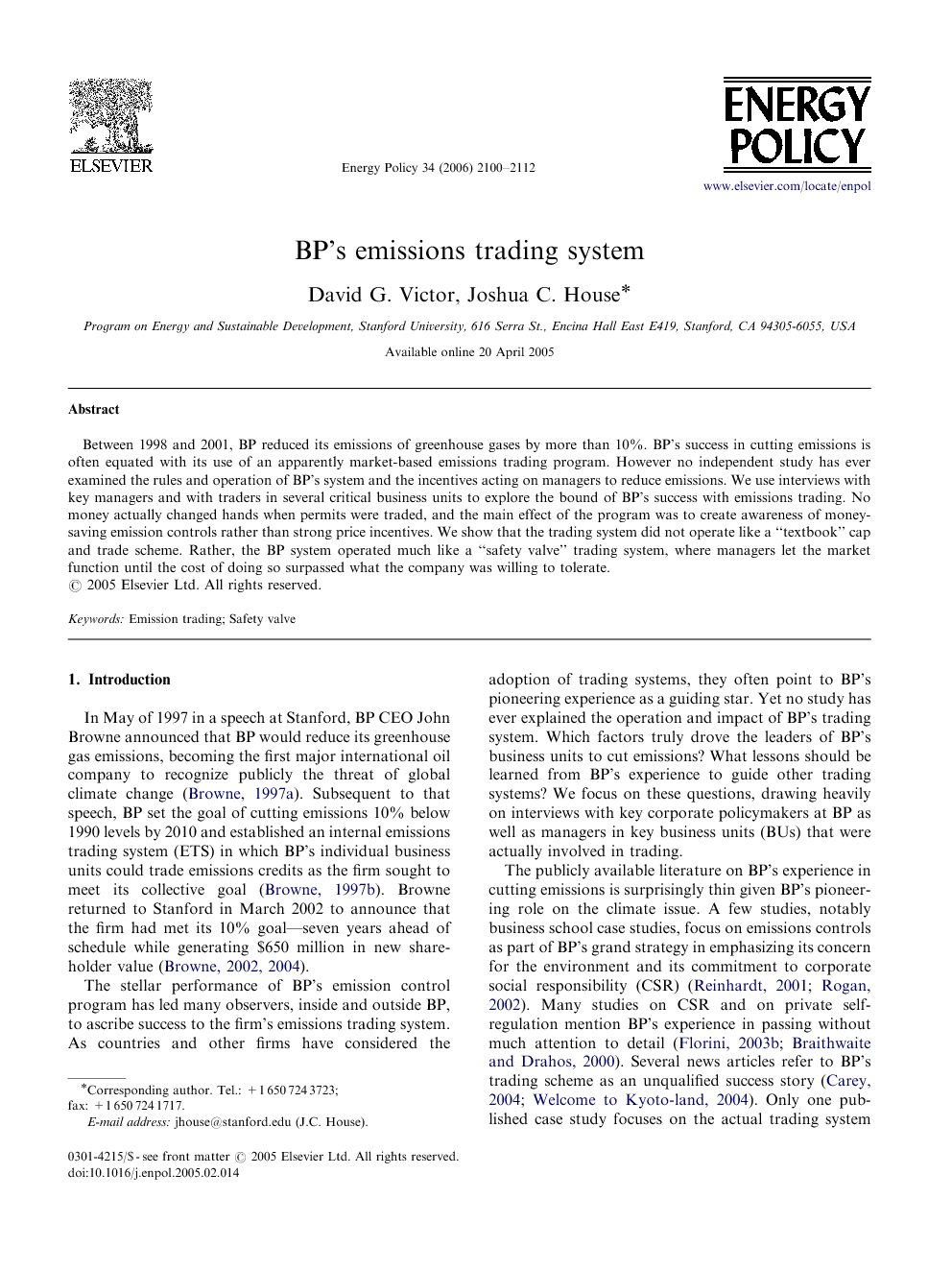 Between 1998 and 2001, BP reduced its emissions of greenhouse gases by more than 10%. BP's success in cutting emissions is often equated with its use of an apparently market-based emissions trading program. However no independent study has ever examined the rules and operation of BP's system and the incentives acting on managers to reduce emissions. We use interviews with key managers and with traders in several critical business units to explore the bound of BP's success with emissions trading. No money actually changed hands when permits were traded, and the main effect of the program was to create awareness of money-saving emission controls rather than strong price incentives. We show that the trading system did not operate like a “textbook” cap and trade scheme. Rather, the BP system operated much like a “safety valve” trading system, where managers let the market function until the cost of doing so surpassed what the company was willing to tolerate.

In May of 1997 in a speech at Stanford, BP CEO John Browne announced that BP would reduce its greenhouse gas emissions, becoming the first major international oil company to recognize publicly the threat of global climate change (Browne, 1997a). Subsequent to that speech, BP set the goal of cutting emissions 10% below 1990 levels by 2010 and established an internal emissions trading system (ETS) in which BP's individual business units could trade emissions credits as the firm sought to meet its collective goal (Browne, 1997b). Browne returned to Stanford in March 2002 to announce that the firm had met its 10% goal—seven years ahead of schedule while generating $650 million in new shareholder value (Browne, 2002 and Browne, 2004). The stellar performance of BP's emission control program has led many observers, inside and outside BP, to ascribe success to the firm's emissions trading system. As countries and other firms have considered the adoption of trading systems, they often point to BP's pioneering experience as a guiding star. Yet no study has ever explained the operation and impact of BP's trading system. Which factors truly drove the leaders of BP's business units to cut emissions? What lessons should be learned from BP's experience to guide other trading systems? We focus on these questions, drawing heavily on interviews with key corporate policymakers at BP as well as managers in key business units (BUs) that were actually involved in trading. The publicly available literature on BP's experience in cutting emissions is surprisingly thin given BP's pioneering role on the climate issue. A few studies, notably business school case studies, focus on emissions controls as part of BP's grand strategy in emphasizing its concern for the environment and its commitment to corporate social responsibility (CSR) (Reinhardt, 2001; Rogan, 2002). Many studies on CSR and on private self-regulation mention BP's experience in passing without much attention to detail (Florini, 2003b; Braithwaite and Drahos, 2000). Several news articles refer to BP's trading scheme as an unqualified success story (Carey, 2004; Welcome to Kyoto-land, 2004). Only one published case study focuses on the actual trading system itself—a study written by BP managers and offering a broad overview of the firm's ETS rules and results without detailed attention to the incentives that affected the actions of BU managers (Akhurst et al., 2003). When BP announced the creation of its ETS, the firm's strategists had three goals in mind, each of which we evaluate. First, BP sought to gain experience with the policy instrument that was a likely mechanism to be deployed in a future, economy-wide emissions limitation program. Second, they hoped that a successful demonstration of emissions trading would forestall alternative, more costly policy responses such as an emissions tax. European policy makers had been exploring the imposition of carbon taxes since the early 1990s, and for firms such as BP with large emissions, such policies could be disadvantageous because they would shift revenues from the firm to the taxing governments. Third, the firm sought a decentralized mechanism that would encourage business units to find the most advantageous cuts in emissions. As an organization, BP is geographically and operationally diverse, and business units have varying marginal costs of emissions reductions—exactly the attributes that have drawn many policymakers to use market instruments for cutting emissions rather than central command. At the same time that BP sought an appropriate mechanism for controlling emissions across its business units, it was also growing rapidly and attempting to decentralize control in the allocation of capital resources. The emissions trading system for greenhouse gases, tiny beside the billions of dollars in capital the firm deploys every year, was part of a broader effort to centralize strategic choices (e.g. the setting of an emission cap) but decentralize control over deployment. Section 1 details the nuts and bolts of BP's ETS. It covers the program's origins and key rules, such as those governing allocation of emissions permits as well as enforcement and compliance. Section 2 examines the effect on the incentives of BU managers. We discuss those effects generally and through the stories of two different business units—one an active seller of permits and one a buyer that missed its target—to illustrate how BP's cap and trade system actually worked on the ground. We also examine several rival hypotheses that may explain BP's success in reducing emissions. The final section revisits the lessons we derive from BP's experience and their relevance to future schemes.

Conventional wisdom holds that it is a hard cap along with a credible compliance mechanism that creates the incentive to reduce emissions in a cap and trade system. BP’s internal emissions trading system was not a classic textbook trading system, and its experience suggests different conclusions. 10 Awareness—spurred by mea- surement and the BP leadership’s commitment to the issue—appears to have exerted the largest influence on emissions. The trading system itself served more as an organizational device that helped to elicit information about control costs. Unlike a classic textbook system, the allocations were not enforced strictly. Decisions made during one period did not credibly bind the task force or BUs for later periods. The lessons from BP’s ETS could apply to other firms that are keen to reduce emissions yet, like BP, are also adamant that emission controls do not interfere with normal business operations. BP’s goal in creating the system was to shave 10% off the group’s emissions. It succeeded admirably in that task. By prominently adopting the trading system at the same time, BP probably also helped to establish the credibility of the trading concept—although the BP system actually did not have many of the hallmarks (e.g., a binding cap) of a trading system. Rather, BP’s system operated more as a management device. Insofar as the lessons from BP’s trading experience apply to other settings, perhaps most important is its implica- tions for the concept of a ‘‘safety valve.’’ In such a trading system the manager announces in advance that it will issue new permits at an agreed price—thus guaranteeing, in effect, that the cost of complying with the system will never rise above the price and thus the system will never force its participants to pay more than they are willing to bear. That, in essence, is what BP did. Its managers fine-tuned the allocation of credits to yield the outcomes it sought, and they abandoned the system when it became cumbersome and costly.