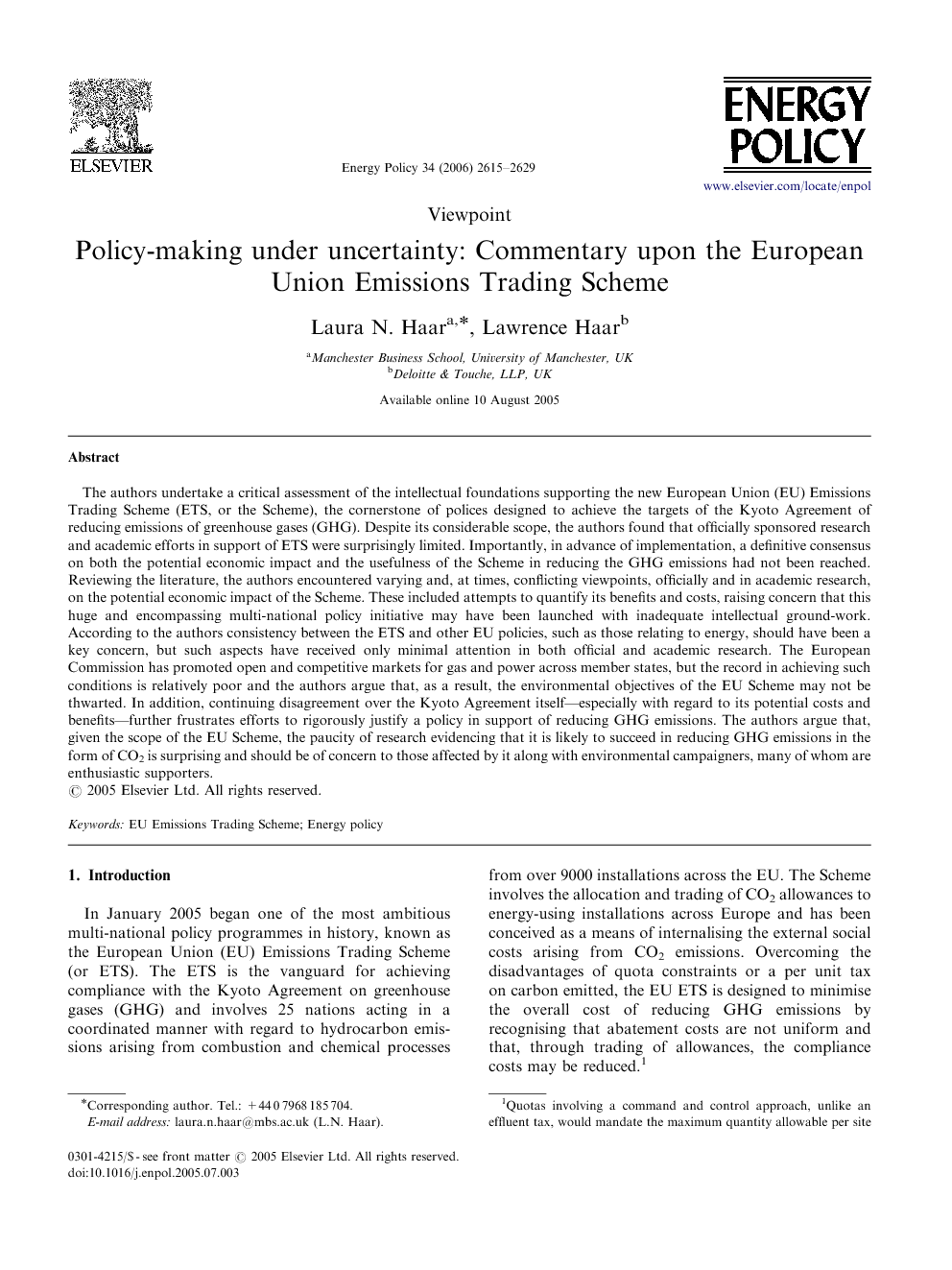 The authors undertake a critical assessment of the intellectual foundations supporting the new European Union (EU) Emissions Trading Scheme (ETS, or the Scheme), the cornerstone of polices designed to achieve the targets of the Kyoto Agreement of reducing emissions of greenhouse gases (GHG). Despite its considerable scope, the authors found that officially sponsored research and academic efforts in support of ETS were surprisingly limited. Importantly, in advance of implementation, a definitive consensus on both the potential economic impact and the usefulness of the Scheme in reducing the GHG emissions had not been reached. Reviewing the literature, the authors encountered varying and, at times, conflicting viewpoints, officially and in academic research, on the potential economic impact of the Scheme. These included attempts to quantify its benefits and costs, raising concern that this huge and encompassing multi-national policy initiative may have been launched with inadequate intellectual ground-work. According to the authors consistency between the ETS and other EU policies, such as those relating to energy, should have been a key concern, but such aspects have received only minimal attention in both official and academic research. The European Commission has promoted open and competitive markets for gas and power across member states, but the record in achieving such conditions is relatively poor and the authors argue that, as a result, the environmental objectives of the EU Scheme may not be thwarted. In addition, continuing disagreement over the Kyoto Agreement itself—especially with regard to its potential costs and benefits—further frustrates efforts to rigorously justify a policy in support of reducing GHG emissions. The authors argue that, given the scope of the EU Scheme, the paucity of research evidencing that it is likely to succeed in reducing GHG emissions in the form of CO2 is surprising and should be of concern to those affected by it along with environmental campaigners, many of whom are enthusiastic supporters.

In January 2005 began one of the most ambitious multi-national policy programmes in history, known as the European Union (EU) Emissions Trading Scheme (or ETS). The ETS is the vanguard for achieving compliance with the Kyoto Agreement on greenhouse gases (GHG) and involves 25 nations acting in a coordinated manner with regard to hydrocarbon emissions arising from combustion and chemical processes from over 9000 installations across the EU. The Scheme involves the allocation and trading of CO2 allowances to energy-using installations across Europe and has been conceived as a means of internalising the external social costs arising from CO2 emissions. Overcoming the disadvantages of quota constraints or a per unit tax on carbon emitted, the EU ETS is designed to minimise the overall cost of reducing GHG emissions by recognising that abatement costs are not uniform and that, through trading of allowances, the compliance costs may be reduced.1 Reflecting the scope and magnitude of the EU Scheme, considerable debate has arisen over its direct impact upon regulated utilities and indirect impact upon consumers and users of energy. Questions such as the following have been raised: Will the Scheme reduce GHG emissions? Will the Scheme promote energy efficiency on the part of energy-intensive sectors? Will the costs of compliance under the Scheme, as reflected in the price of CO2 allowances, be sufficient to promote energy conservation and reduce reliance upon carbon-based technologies? Will the Scheme encourage power generators in the immediate term to alter running regimes and the scheduling of plant merit order towards less carbon-intensive energy sources (and, in the longer term, away from carbon-based technologies) such as renewables? How will the burden of compliance under the Scheme rest between consumers and businesses? Will switching away from coal in favour of natural gas create upward pressure on hydrocarbon prices? Will the international competitiveness of energy-intensive sectors, e.g. bulk chemicals or aluminium sheet, be adversely affected? Will there be a long-term macro-economic impact occurring from transition and structural readjustment costs under the Scheme? These and many other questions in relation to the EU ETS are frequently mentioned in recent business and financial press and various policy forums.2 In the present research, as we examine the intellectual background for the EU ETS, we point out three main concerns. Firstly that, given the scope of the Scheme, it is somewhat surprising that research, both academic and official, into the potential impact has not been exhaustive. To that effect, in Section 2.1, we survey existing efforts and the extent to which a received view has emerged. We also analyse the context in which such research has been undertaken and examine whether its remit was appropriate and its objectives sufficiently ambitious. Secondly, the authors maintain that existing research has overlooked some critical aspects for the Scheme to function properly. Therefore, turning to the gaps in existing research, in Section 2.2, we look at the inter-action between the ETS and present EU energy policy, examining whether the two areas are consistent and compatible with one another. This subject raises a host of new questions on how the structure and behaviour of energy markets relates to the pursuit of environmental policies, such as the reduction of GHG through the EU Emissions Scheme. Thirdly, in Section 2.3, we focus upon the challenges of applying cost–benefit analysis to the ETS within the context of the Kyoto Agreement. We ask to what extent objective quantification of such benefits and costs are possible, and how helpful they might be in validating the EU Scheme. In Section 3, through exploring the intellectual foundations upon which the EU Scheme currently stands, we will examine the extent to which this ambitious policy is intellectually well-supported and the grounds for believing that it will achieve its objectives of reducing GHG emissions.

Summarising the above observations and remarks together, several themes may be distilled. Firstly, that the market structure and behaviour required for any such ETS to function as designed may demand a competitive market structure which is not what we have in place nor are likely to have in the future. Research therefore needs to be undertaken into the likely impact of the Scheme given the existing and future energy market structure and conduct in the EU, and, con- versely, into how we can achieve environmental objectives given the conditions in place. Both the UK and European energy policy has not been successful infostering an open and competitive, pan-European market in power and gas and, hence, there is a return to administered prices. The market structure throughout Europe today is highly vertically integrated with several regional cartels. Power, as a traded market on various exchanges, functions largely as day-ahead and within-day balancing and shaping market for power supply, with very limited liquidity along the forward curve. As such it reduces the scope for pure financial participants, critical to a liquid market for power capable of providing investment signals. Recognising such market structure and the potential to exercise market power, the probability remains that the cost of CO 2 emissions allowances, as an output tax, will, in varying degrees and depending upon local conditions, be passed forward to industry, businesses and consumers. In such local conditions, the willingness of local regulators to selectively modify the behaviour, through price administration, of power generators figures strongly. In light of the above, the possibility of the second outcome—i.e. combining higher power prices to consumers and businesses but without any measurable benefit in reducing GHG emissions—is a distinct possibility and should be of major worry to environ- mental advocates. 40 Creating simulations, as performed by various consulting organisations and as sponsored by various official organisations, while intellectually inter- esting, does not answer the questions necessary to rigorously complete the assessment of regulatory im- pact, address the broader economic impact concerns, and establish if the Scheme will help in reducing atmospheric GHG. Judgemental assumptions on the degree of pass-forward costs, as have been undertaken by consultants and as the DTI has entertained, are only informed opinions. The academic literature, meanwhile, though intriguing, has yet not evolved a received consensus on methods, model specifications and as- sumptions to be usable for applied policy analysis and research. Turning to how we justify policy, we have highlighted briefly some of the varied opinions on the benefits of avoiding global warming and GHG emissions and the costs of implementing the Scheme. The absence of consensus in of itself points to the intellectually unstable grounds on which the EU Scheme in service to Kyoto has been pursued: an auto-de-fe. Although taking the lead on GHG emissions as the EU has done may encourage others to join, it is equally probable that almost half the world, driven by growing populations and committed to economic development, will not. The RIA undertaken by the UK Government, as supported by the efforts of consultants, along with other publishedresearch sponsored by the EU Commission and other official bodies, does not begin to come to grips with the huge uncertainties of the EU ETS, of whether it is quantitatively justified from a cost and benefits perspec- tive and whether, given the state of energy markets and the behaviour of other countries outside the EU, has any hope of promoting the objectives of the Kyoto Agree- ment. In sum, we have a massive policy initiative— directly regulating over nine thousand of energy-using installations across the EU and, indirectly, millions of businesses and hundreds of millions of consumers— standing upon weak intellectual foundations. This should be of fundamental concern to individuals and to organisations committed to controlling the growth in GHG. Pursuing and supporting the EU Scheme under circumstances of manifest uncertainty with regard to its success, would seem difficult to defend.