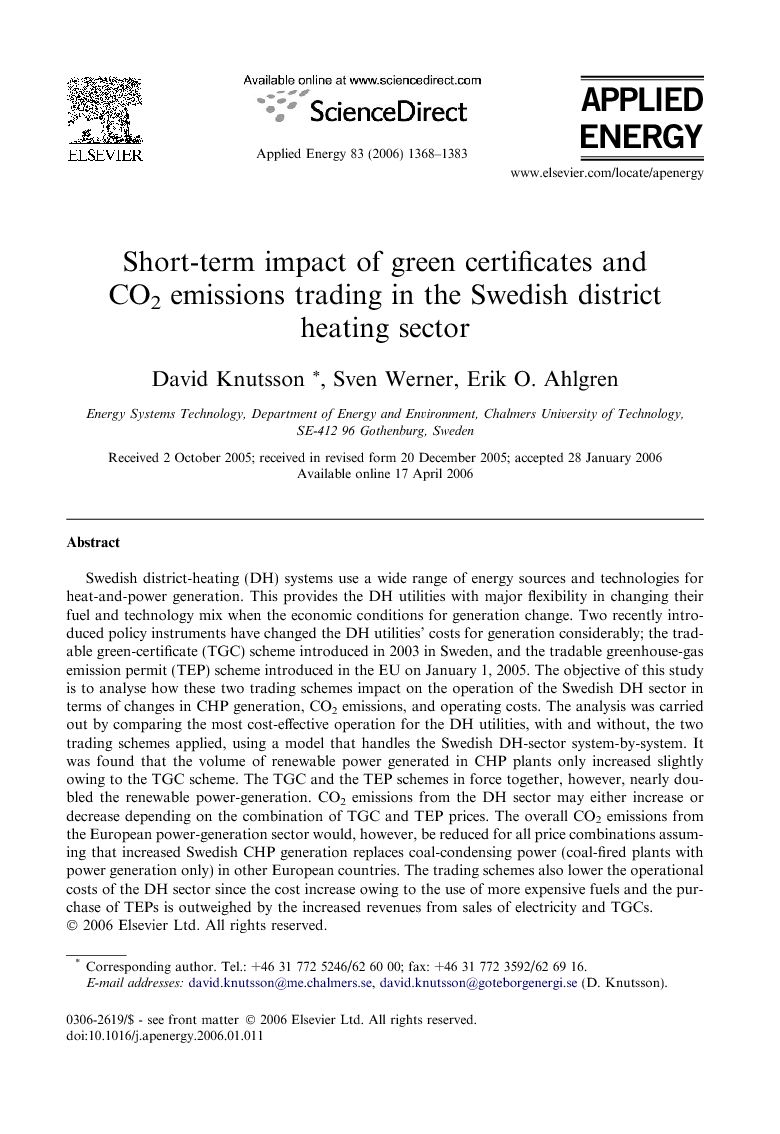 Swedish district-heating (DH) systems use a wide range of energy sources and technologies for heat-and-power generation. This provides the DH utilities with major flexibility in changing their fuel and technology mix when the economic conditions for generation change. Two recently introduced policy instruments have changed the DH utilities’ costs for generation considerably; the tradable green-certificate (TGC) scheme introduced in 2003 in Sweden, and the tradable greenhouse-gas emission permit (TEP) scheme introduced in the EU on January 1, 2005. The objective of this study is to analyse how these two trading schemes impact on the operation of the Swedish DH sector in terms of changes in CHP generation, CO2 emissions, and operating costs. The analysis was carried out by comparing the most cost-effective operation for the DH utilities, with and without, the two trading schemes applied, using a model that handles the Swedish DH-sector system-by-system. It was found that the volume of renewable power generated in CHP plants only increased slightly owing to the TGC scheme. The TGC and the TEP schemes in force together, however, nearly doubled the renewable power-generation. CO2 emissions from the DH sector may either increase or decrease depending on the combination of TGC and TEP prices. The overall CO2 emissions from the European power-generation sector would, however, be reduced for all price combinations assuming that increased Swedish CHP generation replaces coal-condensing power (coal-fired plants with power generation only) in other European countries. The trading schemes also lower the operational costs of the DH sector since the cost increase owing to the use of more expensive fuels and the purchase of TEPs is outweighed by the increased revenues from sales of electricity and TGCs.

The objective of this study was to analyse how the introduction of TGC and TEP schemes impact on the operation of the Swedish DH-sector in terms of changes in CHP generation, CO 2 emissions and operating costs. The study showed that the increase in renewable power-generation in CHP plants owing to the TGC scheme is in the range of 0.2–0.4 TWh/year, depending on TGC price (two TGC prices were tested, 10 and 20 € / MWh el ). The existing CHP plants in the DH sector are therefore not likely to contribute to any significant extent to the fulfilment of the goal of the TGC scheme (to increase the annual renewable power-generation to 10 TWh by 2010). To significantly increase the renewable power-generation from the existing CHP plants in the DH sector, a TGC price of 27 € /MWh el would be required. At this TGC price, fuel switches from coal to wood fuel become profitable in CHP plants with that fuel flexibility (for the given coal and wood-fuel prices). The effects of the TGC scheme on Swedish CO 2 -emissions are uncertain. CO 2 emissions may well increase since peat CHP plants (generation from which is TGC eligible) will be more profitable to operate. The cost of using electricity-powered heat pumps and electric HOBs will also be higher with the TGC scheme (owing to the quota obligation) to the ben- efit of all other fuels (including fossil fuels). The CO 2 emissions in the European power- generation sector (the net CO 2 emissions) will, however, decrease with the TGC scheme since the increased CHP generation and decreased power-consumption (in electricity-pow- ered heat-pumps and electric HOBs) in the DH sector are assumed to decrease coal con- densing power-generation correspondingly. With the TGC and the TEP schemes jointly in force, fuel switching from coal to wood fuels becomes profitable in CHP plants for all the tested combinations of TGC and TEP prices, owing to the increased cost of using coal. 24 Consequently, the volume of renewable electricity-generation increases greatly, between 1.5 and 1.8 TWh/year depending on the combination of TGC and TEP price, as compared with the reference scenario. This also reduces the Swedish CO 2 -emissions for all tested combinations of TGC and TEP prices. The net CO 2 emissions are reduced to approximately zero. The TGC and TEP schemes applied together, in combination with the abolition of the current CO 2 tax, will remove the financial incentive for fuel switches from coal to wood fuels (except for the price combination 20 € /MWh el and 20 € /tCO 2 for TGCs and TEPs, respectively). Except for this price combination, the volume of renewable power-genera- tion is, then, reduced to the volume with only the TGC scheme applied (scenario 1).The Swedish CO 2 -emissions will also be higher if the CO 2 tax is removed than they were before the TEP scheme was introduced. The incomes from the TGC scheme will reduce the overall operating cost in the DH sector. Jointly applied, the TGC and the TEP schemes will reduce the operating costs for the DH sector further since the increased costs of using more expensive fuels and of buying TEPs are compensated for by the higher income from power sales. Removal of the current CO 2 tax would of course also reduce the operating costs.