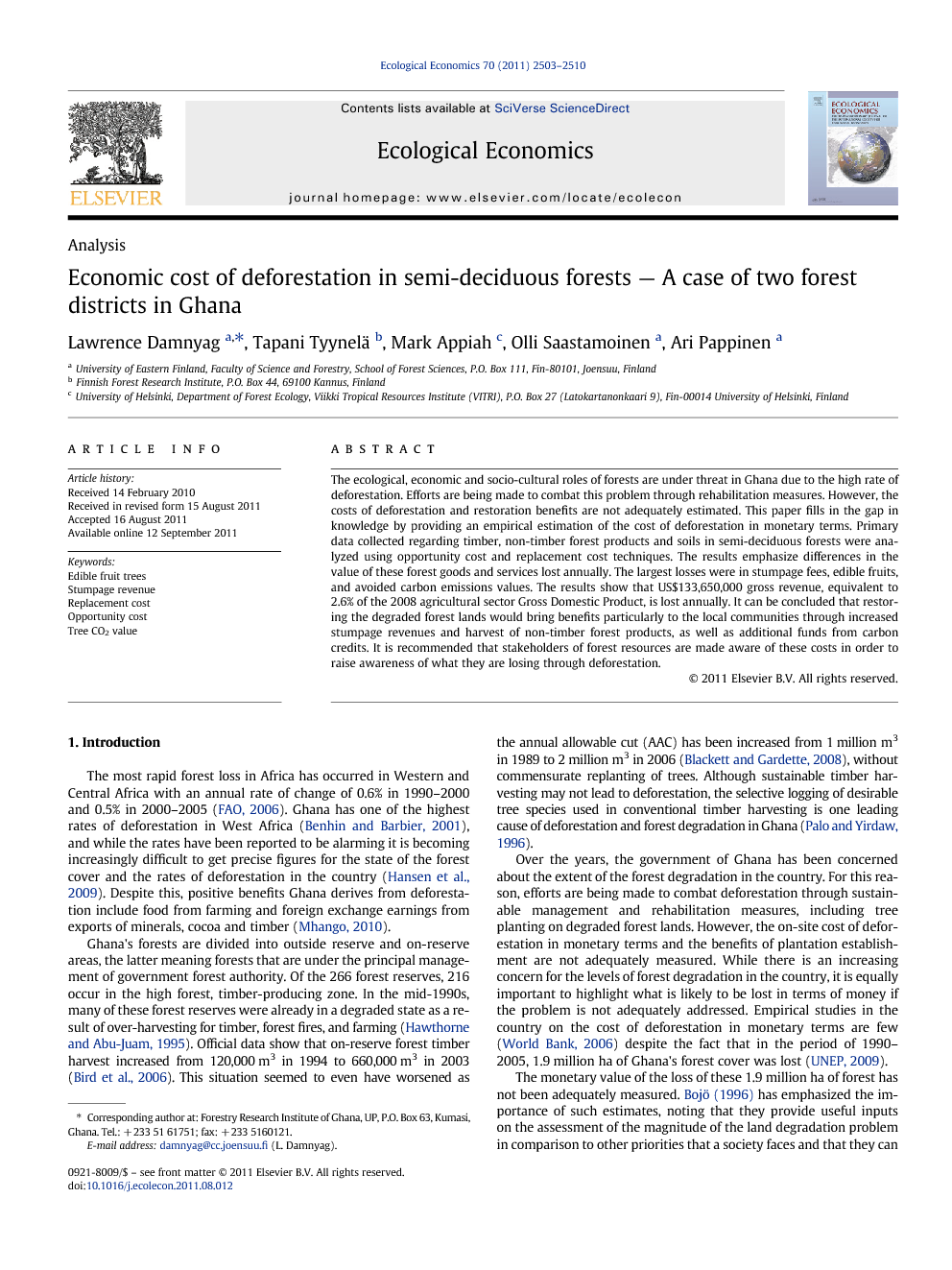 The ecological, economic and socio-cultural roles of forests are under threat in Ghana due to the high rate of deforestation. Efforts are being made to combat this problem through rehabilitation measures. However, the costs of deforestation and restoration benefits are not adequately estimated. This paper fills in the gap in knowledge by providing an empirical estimation of the cost of deforestation in monetary terms. Primary data collected regarding timber, non-timber forest products and soils in semi-deciduous forests were analyzed using opportunity cost and replacement cost techniques. The results emphasize differences in the value of these forest goods and services lost annually. The largest losses were in stumpage fees, edible fruits, and avoided carbon emissions values. The results show that US$133,650,000 gross revenue, equivalent to 2.6% of the 2008 agricultural sector Gross Domestic Product, is lost annually. It can be concluded that restoring the degraded forest lands would bring benefits particularly to the local communities through increased stumpage revenues and harvest of non-timber forest products, as well as additional funds from carbon credits. It is recommended that stakeholders of forest resources are made aware of these costs in order to raise awareness of what they are losing through deforestation.

The most rapid forest loss in Africa has occurred in Western and Central Africa with an annual rate of change of 0.6% in 1990–2000 and 0.5% in 2000–2005 (FAO, 2006). Ghana has one of the highest rates of deforestation in West Africa (Benhin and Barbier, 2001), and while the rates have been reported to be alarming it is becoming increasingly difficult to get precise figures for the state of the forest cover and the rates of deforestation in the country (Hansen et al., 2009). Despite this, positive benefits Ghana derives from deforestation include food from farming and foreign exchange earnings from exports of minerals, cocoa and timber (Mhango, 2010). Ghana's forests are divided into outside reserve and on-reserve areas, the latter meaning forests that are under the principal management of government forest authority. Of the 266 forest reserves, 216 occur in the high forest, timber-producing zone. In the mid-1990s, many of these forest reserves were already in a degraded state as a result of over-harvesting for timber, forest fires, and farming (Hawthorne and Abu-Juam, 1995). Official data show that on-reserve forest timber harvest increased from 120,000 m3 in 1994 to 660,000 m3 in 2003 (Bird et al., 2006). This situation seemed to even have worsened as the annual allowable cut (AAC) has been increased from 1 million m3 in 1989 to 2 million m3 in 2006 (Blackett and Gardette, 2008), without commensurate replanting of trees. Although sustainable timber harvesting may not lead to deforestation, the selective logging of desirable tree species used in conventional timber harvesting is one leading cause of deforestation and forest degradation in Ghana (Palo and Yirdaw, 1996). Over the years, the government of Ghana has been concerned about the extent of the forest degradation in the country. For this reason, efforts are being made to combat deforestation through sustainable management and rehabilitation measures, including tree planting on degraded forest lands. However, the on-site cost of deforestation in monetary terms and the benefits of plantation establishment are not adequately measured. While there is an increasing concern for the levels of forest degradation in the country, it is equally important to highlight what is likely to be lost in terms of money if the problem is not adequately addressed. Empirical studies in the country on the cost of deforestation in monetary terms are few (World Bank, 2006) despite the fact that in the period of 1990–2005, 1.9 million ha of Ghana's forest cover was lost (UNEP, 2009). The monetary value of the loss of these 1.9 million ha of forest has not been adequately measured. Bojö (1996) has emphasized the importance of such estimates, noting that they provide useful inputs on the assessment of the magnitude of the land degradation problem in comparison to other priorities that a society faces and that they can be used to modify a country's National Income Accounts to better reflect the sustainable income. Additionally, Dreschsel et al. (2001) estimate Sub Saharan Africa (SSA) soil nutrient depletion to be about 7% of its Agricultural Gross Domestic Product (AGDP). In terms of monetary value, this was equivalent to US$4 billion per annum (Dreschsel et al., 2001). Although significant, it appears that this figure did not include many other goods and services that the tropical forest is endowed with and which are fast degrading. It is this knowledge gap in the assessment of the economic cost of deforestation that this paper attempts to fill in the case of Ghana. The aim is to provide an empirical basis for the estimation of the cost of deforestation in monetary terms and an estimation of the benefits from restoring degraded forests by employing primary data collected on timber, non-timber forest product, soils, and tree carbon stocks from typical semi-deciduous forest lands. The paper seeks to determine the cost of the total loss of current standing forest in monetary terms from the value differences of the forest goods and services in three forest types: natural forests, degraded forests and plantation forests. The scope of the paper is limited to these four ecosystem services, and the rationale is to explain/show the minimum cost of deforestation to raise awareness about it and call attention to the need to address it.

This paper estimates the monetary cost of deforestation in two areas, namely the direct and indirect use values. The findings highlight the need for the conservation and restoration of degraded forests. Summing up the stumpage revenue, the edible fruits value, the avoided carbon emission value and the soil fertility losses, approximately US$133,650,000 gross revenue, equivalent to 2.6% of the 2008 agricultural Gross Domestic Product of Ghana is lost annually due to deforestation. Although decision on forests conservation might be guided by cost benefit analysis or related approaches where benefits are considered; a decision based on deforestation cost estimates as done in this study is useful for conservation policies. In this regard, the results have implications regarding how techniques for valuing ecosystem service benefits in monetary terms can assist the development of forest policy (Bojö, 1996). Restoring these degraded forest areas will bring numerous benefits to the economy of Ghana. Apart from the increased stumpage revenue, NTFPs could be restored. The carbon credit revenues could also be earned, bringing additional funds for forest conservation and livelihood improvement. The results could also be of importance for policy purposes. This is particularly relevant at a time when there have been leakages in the collection of forest fees, as well as complaints of inadequate benefits from forest revenue by forest land owners in Ghana. These are negatively affecting forest management in terms of reduced finances and ineffective cooperation between forest managers and the land owners. One other implication of the results is that information about these losses to forest stakeholders, especially forest dwelling communities, may prompt them to step up efforts to address deforestation (Hansen et al., 2009). They may do this through support and commitment to forest management. In this regard, the stakeholders need to be made aware of these costs and their magnitude for them to appreciate what they are losing so that they can be encouraged to take the desired actions. One final implication of the findings is that the cost of deforestation reduces stumpage revenues, which negatively affects sustainable forest management. Therefore, addressing the problem of deforestation would go a long way to improve forest management through the use of additional funds that are otherwise lost through the deforestation. However, for these gains to be realized the challenges of forest conservation and reforestation need to be addressed; in particular, tree and carbon credits tenure may have to be reformed to favor forest dwelling communities. The present study was limited to the use of four ecosystem services to estimate the cost of deforestation. In doing this, inter-temporal estimations of costs and benefits were not considered. It is hoped that further work will consider these in the future.