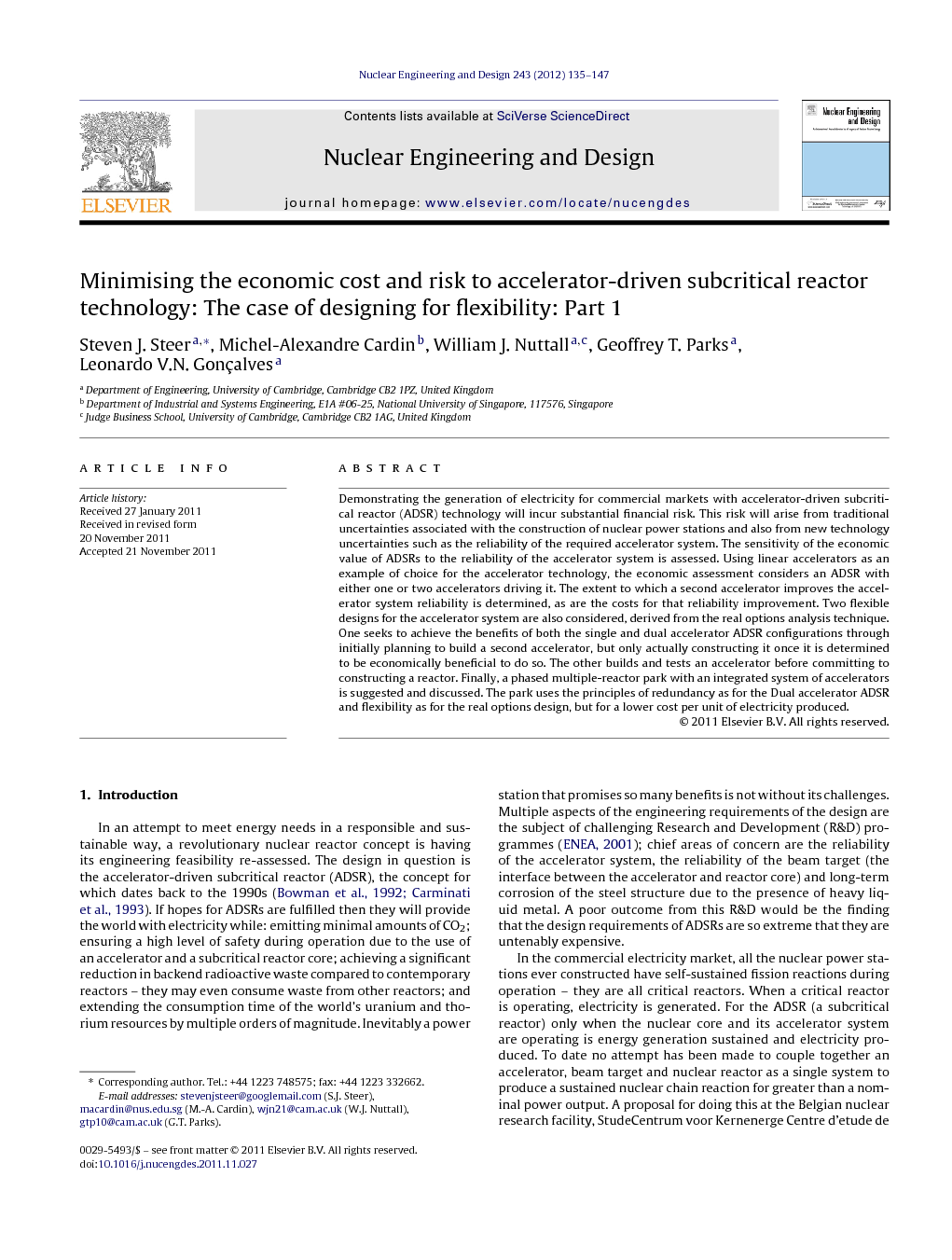 If an ADSR operator were to sell electricity into the contemporary UK electricity market, it would only return a marginal profit if it successfully delivered electricity for more than 3 days in every 10 of its contracts. By assuming that all other systems are 100% reliable and that an accelerator system failure will cause a shutdown 24 h in duration, it is established that it is not worth scheduling to sell any ADSR-produced electricity unless the accelerator fails less than ∼200 times per year. Assuming that the relative frequency of failure durations of future accelerator systems express similar behaviour to that of contemporary ones, it has been demonstrated that an ADSR driven by two accelerators will shut down ∼200 times per year with accelerators that individually trip many hundreds to low thousands of times per year. The feasibility of the Dual accelerator design hinges on there being a system in place that enables one accelerator to compensate for the other within a second of it experiencing a fault. A top-down financial cost-benefit-analysis has been performed for ADSRs. The financial model has been used to examine by how much a second accelerator escalates the cost of generating electricity with an ADSR. Without commenting on the future price of electricity it has been shown that if accelerator performance is poor, Dual accelerator ADSRs do become more valuable than Single accelerator designs. It has also been shown that Dual accelerator ADSRs eliminate nearly all of the investment uncertainty when considering only risks associated with accelerator performance. The down-side of this is an increase in CapExBFR of ∼17.5%. Once other risk factors are taken into account, such as construction delays, the increase in initial capital at risk might be considered more important than increased reliability during operation. The sensitivity of the frequency of accelerator trips to the duration of a trip in turn makes the economic case for ADSRs highly sensitive to the duration that the reactor core can tolerate an interruption in the supply of protons. In relation to the presented analysis: if reactors can tolerate accelerator failures for either greater than, or less than, the 1 s duration used as a reference in this paper, the likelihood of accelerator trips leading to reactor shutdowns will fall, or rise, respectively. Importantly the −2/3 power law that governs the frequency of different beam interruption durations in existing accelerator systems makes the economic sensitivity asymmetric. The value lost if only trip durations briefer than 1 s can be tolerated is greater in magnitude than the value gained if equivalently longer trip durations can be tolerated. The duration of beam failure that a reactor can sustain without shutting down does not significantly affect the total number of trips it can tolerate – instead it affects the likelihood that unplanned reactor shutdowns will occur, i.e. in the context of the presented analysis, it significantly affects the decision tree parameters: ρO, ρC and ρP, but only negligibly affects the value returned by the scenarios: LCOEO, LCOEC and LCOEP. Following a failure, the time it takes to restart an accelerator or the time it takes to divert the beam from a redundant accelerator compared with the duration an ADSR core can tolerate beam interruptions is of crucial importance to its performance. Real options analysis has identified two more first-of-a-kind ADSR designs. One is an expandable design, where initially a single accelerator is built and a second is planned for should it be required. The cost of planning to later build a second accelerator is expected to negligibly increase the LCOE if it is not constructed. The Expandable design does not increase significantly the CapExBFR. This design provides the option to improve reliability, should that be required. The most significant trade-off in the presented economic analysis is that reliability can only be improved after 5 years of reactor operation, which significantly increases the LCOE compared to the Dual design in outcomes where accelerator performance is poor. Qualitatively the issue has also been raised that building the accelerators at different points in time, rather than in parallel, may result in missing out on potentially large economies of scale savings. The second flexible design is the Accelerator Test design. In this case the capital required to test accelerator performance is minimised through only constructing an accelerator at first and then building the reactor (and possibly a second accelerator) later if it is determined to be beneficial to do so. For this design the CapExBFR and the LCOE are worse than for all of the other designs in nearly all circumstances. The very high tolerance of poor accelerator reliability of the Dual and Expandable designs means that in effect they can also test accelerator performance for a similar investment cost as for the Accelerator Test design. This is because they (nearly) guarantee successful electricity sales after construction. In addition to testing the accelerator system these designs will also test all other facets of the design of an ADSR while the Accelerator Test design will not. The concept of a reactor park has been suggested as a way of improving the economic case for generating electricity from an ADSR. The reactor park is expected to cope with accelerator trips in a more financially efficient way than is possible for a single reactor. Greater flexibility in the construction of accelerators and reactors is anticipated. In a follow-on from this study the real options technique and the decision analysis methodology have been applied with greater scope to the design suggestion of an ADSR reactor park (Cardin et al., 2012).