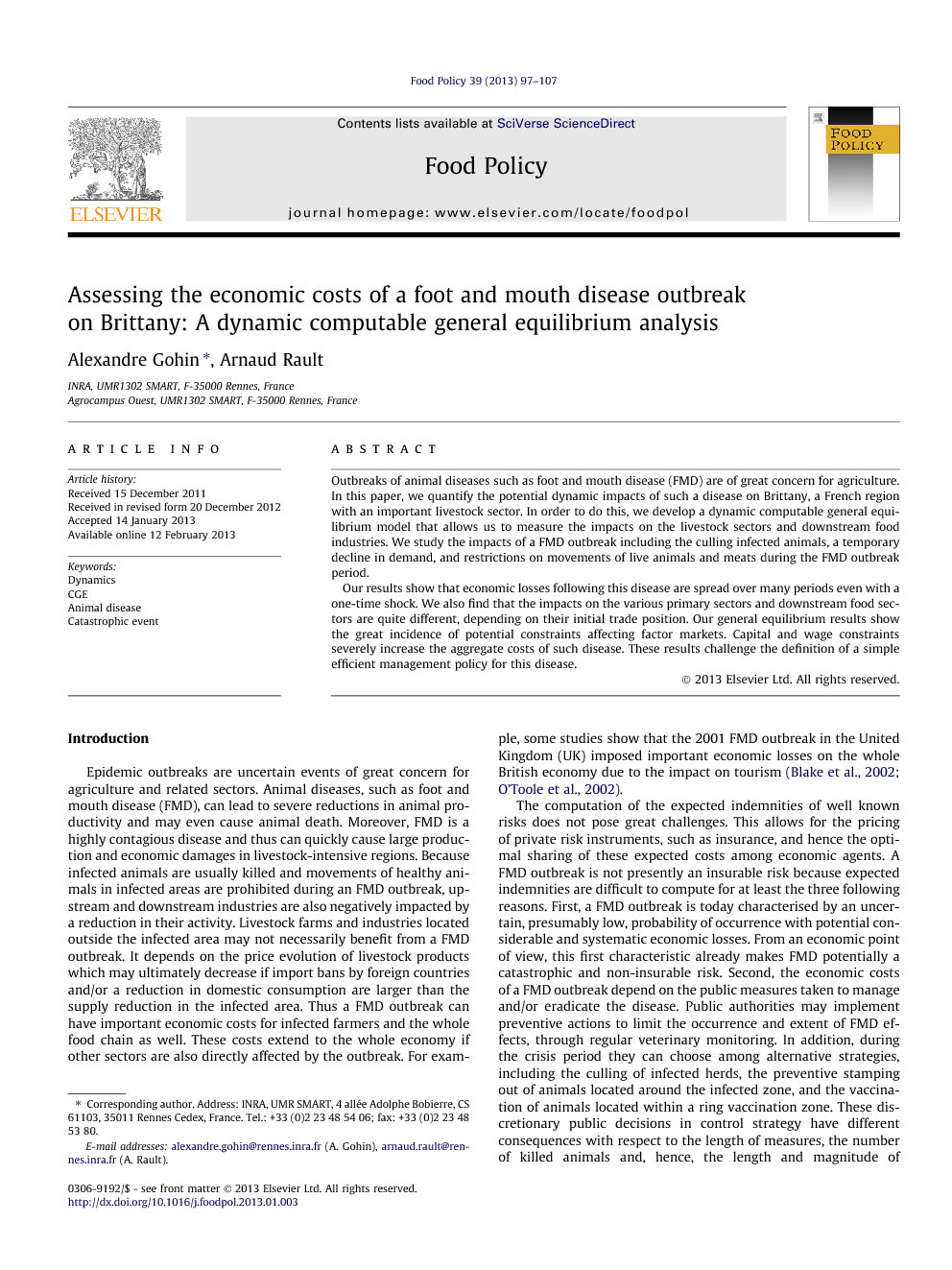 Outbreaks of animal diseases such as foot and mouth disease (FMD) are of great concern for agriculture. In this paper, we quantify the potential dynamic impacts of such a disease on Brittany, a French region with an important livestock sector. In order to do this, we develop a dynamic computable general equilibrium model that allows us to measure the impacts on the livestock sectors and downstream food industries. We study the impacts of a FMD outbreak including the culling infected animals, a temporary decline in demand, and restrictions on movements of live animals and meats during the FMD outbreak period. Our results show that economic losses following this disease are spread over many periods even with a one-time shock. We also find that the impacts on the various primary sectors and downstream food sectors are quite different, depending on their initial trade position. Our general equilibrium results show the great incidence of potential constraints affecting factor markets. Capital and wage constraints severely increase the aggregate costs of such disease. These results challenge the definition of a simple efficient management policy for this disease.

In this paper we investigate the dynamic effects of an outbreak of FMD which is usually considered to be a catastrophic shock on agricultural and food markets. We build a new dynamic CGE model focused on a French livestock intensive region with a detailed representation of the livestock sectors dynamics. We find diffuse effects of a FMD outbreak that have not previously been identified in the economic literature. In particular, we show that beyond the immediate negative impacts of the crisis, effects on agriculture and food industries last over many years. Differentiated consequences are highlighted on livestock and downstream sectors depending on their initial trade positions. Our CGE approach also allows us to focus on the factor markets and their role in smoothing the shock over time and over sectors. When we assume that the factor markets are not perfect because of financial constraints (investment limitations) and institutional constraints (minimum wage), economic equilibrium can only reach a second best position with forced unemployment and foreclosure. The aggregate cost of a potential FMD outbreak appears to be highly dependent on the assumptions made concerning the factor markets. By providing new insights into the long run losses due to a FMD outbreak, these results raise the issue of how to cope with uncertainty on agricultural and food markets. Current crisis policies in Europe do not cover those lasting consequences on farm activities, as well as on downstream industries. Our results also lead us to argue that the currently debated European farm crisis policy in the context of the CAP reform should be designed consistently with the primary factor regulations that exist in the different European countries.