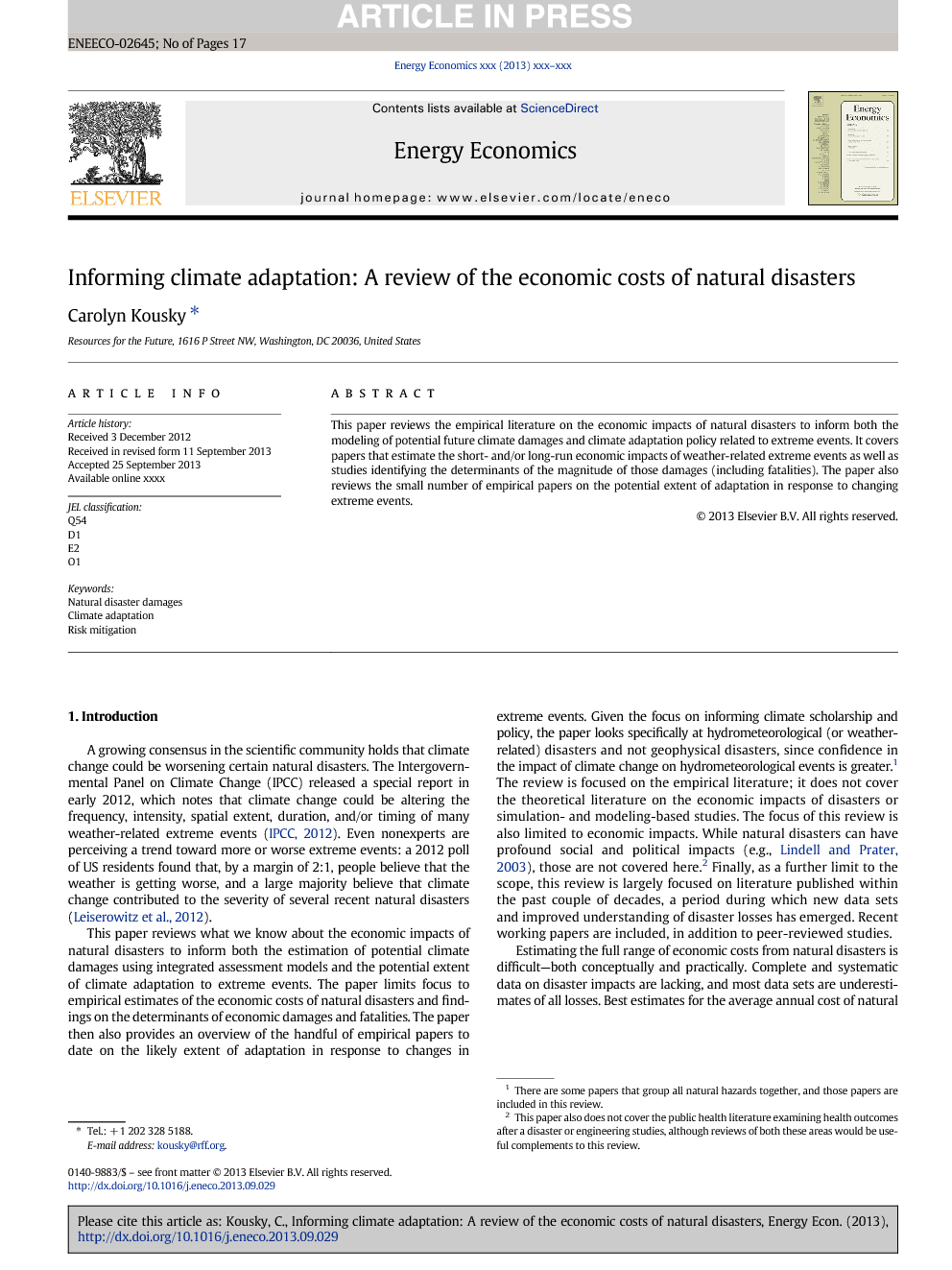 This paper reviews the empirical literature on the economic impacts of natural disasters to inform both the modeling of potential future climate damages and climate adaptation policy related to extreme events. It covers papers that estimate the short- and/or long-run economic impacts of weather-related extreme events as well as studies identifying the determinants of the magnitude of those damages (including fatalities). The paper also reviews the small number of empirical papers on the potential extent of adaptation in response to changing extreme events.

A growing consensus in the scientific community holds that climate change could be worsening certain natural disasters. The Intergovernmental Panel on Climate Change (IPCC) released a special report in early 2012, which notes that climate change could be altering the frequency, intensity, spatial extent, duration, and/or timing of many weather-related extreme events (IPCC, 2012). Even nonexperts are perceiving a trend toward more or worse extreme events: a 2012 poll of US residents found that, by a margin of 2:1, people believe that the weather is getting worse, and a large majority believe that climate change contributed to the severity of several recent natural disasters (Leiserowitz et al., 2012). This paper reviews what we know about the economic impacts of natural disasters to inform both the estimation of potential climate damages using integrated assessment models and the potential extent of climate adaptation to extreme events. The paper limits focus to empirical estimates of the economic costs of natural disasters and findings on the determinants of economic damages and fatalities. The paper then also provides an overview of the handful of empirical papers to date on the likely extent of adaptation in response to changes in extreme events. Given the focus on informing climate scholarship and policy, the paper looks specifically at hydrometeorological (or weather-related) disasters and not geophysical disasters, since confidence in the impact of climate change on hydrometeorological events is greater.1 The review is focused on the empirical literature; it does not cover the theoretical literature on the economic impacts of disasters or simulation- and modeling-based studies. The focus of this review is also limited to economic impacts. While natural disasters can have profound social and political impacts (e.g., Lindell and Prater, 2003), those are not covered here.2 Finally, as a further limit to the scope, this review is largely focused on literature published within the past couple of decades, a period during which new data sets and improved understanding of disaster losses has emerged. Recent working papers are included, in addition to peer-reviewed studies. Estimating the full range of economic costs from natural disasters is difficult—both conceptually and practically. Complete and systematic data on disaster impacts are lacking, and most data sets are underestimates of all losses. Best estimates for the average annual cost of natural disasters worldwide between 2000 and 2012 ranges between $94 billion and a little over $130 billion (see Section 3). The work reviewed here suggests negative consequences of disasters, although communities tend to have a lot of resilience, recovering in the short- to medium-term from all but the most devastating events. The worst disasters, or multiple disasters close in time, can have very long-term, negative economic consequences. Natural disasters generate many transfers and can have substantial distributional consequences, with some groups suffering devastating losses and others coming out ahead, even if overall impacts are close to neutral. Consequences are less severe in higher-income countries, countries with better institutions, and those with a higher level of education. Risk reduction options are available, but predicting increases in adoption in response to climate change is difficult. The occurrence of a disaster has been shown in some cases to increase investments in reducing risks. In addition, some evidence suggests that areas more prone to hazards invest more in reducing their impacts, providing some limited insight on potential future adaptation. Recent research is attempting to move beyond correlations, particularly by addressing the endogeneity of many disaster measures, and more work on this is needed. The next section of the paper discusses the difficulties with obtaining empirical estimates of the total economic costs of natural disasters and summarizes the approaches taken in the literature. Section 3 provides an overview of annual disaster costs worldwide and trends over time. Section 4 is the heart of the paper summarizing the work on the economic impacts of weather-related disaster events in the short and long run. Section 5 then briefly discusses the question of whether and when natural disasters can have positive impacts. Section 6 reviews the work on the determinants of both disaster fatalities and damages. Section 7 provides a short overview of potential adaptation to changes in extreme events. Section 8 offers a brief comment on future research directions suggested by this review. Section 9 concludes.

Several devastating weather events since 2000—including the 2003 European heat wave, the 2004 Indian Ocean tsunami, Hurricane Katrina in 2005, the 2010 floods in Pakistan, and Hurricane Sandy in 2012—have spurred renewed interest in natural disasters. In the United States, 2011 saw a surge in media attention to disasters as many extreme event records were broken and a string of disasters all exceeded $1 billion in estimated damages, including a blizzard, tornadoes, wildfires, and flooding. Swiss Re (2012) estimated economic losses from disasters (natural and anthropogenic) in 2011 worldwide to be over $370 billion—a record driven by the earthquake and tsunami in Japan. Estimates of the average annual cost of weather-related extreme events since 2000 range between $94 billion and over $130 billion. Estimates of the full range of economic costs of disaster events, however, are limited by the lack of complete and systematic data worldwide, or even within countries. All data sets underestimate indirect losses, if they are included at all, and none include nonmarket impacts or costs to informal sectors of the economy. Damages do vary by disaster type, with climate-related events, and flooding in particular, responsible for a larger share of damages and fatalities. Damages are also not borne equally, with developing countries bearing a larger share of the burden, particularly in terms of the loss of life. Despite these costs, the research to date suggests that many natural disaster events have a relatively modest impact on output and growth and which disappears fairly quickly. The impacts are larger for more severe events, however, and some recent papers suggest that natural disasters, particularly severe ones or multiple events, can have very long-term negative consequences. Impacts on macroeconomic variables are also more negative for smaller geographic areas and in developing countries. Higher-income countries, countries with higher levels of education, and those with higher-quality institutions face smaller negative impacts. The largest impact of natural disasters is often distributional, with some groups and sectors being hard hit, and others even benefitting from the reconstruction after the event. Disaster losses have been increasing over time and there is some evidence that climate may be beginning to contribute to this trend, which was historically driven by increased value in high risk area—at least for certain hazards in certain areas. The work on the historical cost of disasters can be integrated with climate projections to begin to get some estimates of how damages may respond as the climate warms. Including adaptation in this work is more challenging. Some studies reviewed here have begun to examine how areas with different risk levels have invested differentially in hazard mitigation. Such studies, however, fail to account for timing of adaptation or separate measures that can be done in the short-term versus those that can only occur over a longer time span (such as substantial changes in development patterns). It is also difficult to capture how much hazard mitigation will be spurred by the salience of disaster occurrences or by the increasing attention being brought to them in the context of climate change.