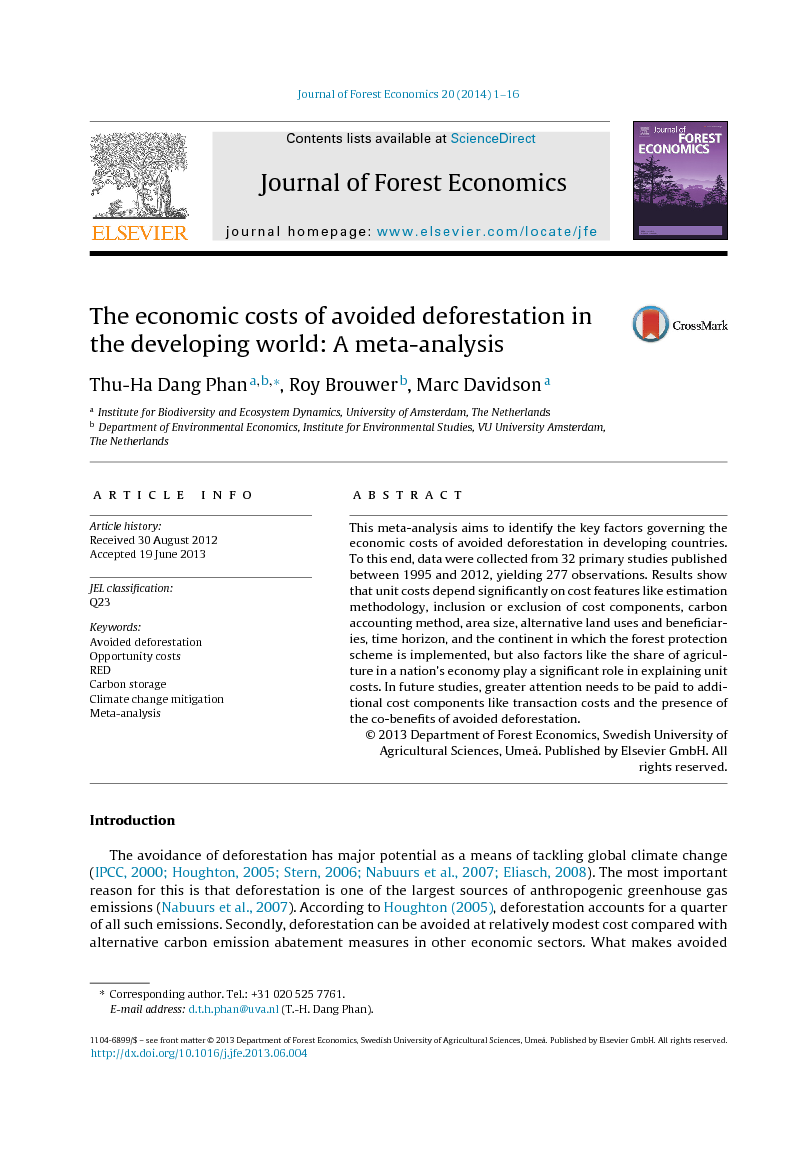 This meta-analysis aims to identify the key factors governing the economic costs of avoided deforestation in developing countries. To this end, data were collected from 32 primary studies published between 1995 and 2012, yielding 277 observations. Results show that unit costs depend significantly on cost features like estimation methodology, inclusion or exclusion of cost components, carbon accounting method, area size, alternative land uses and beneficiaries, time horizon, and the continent in which the forest protection scheme is implemented, but also factors like the share of agriculture in a nation's economy play a significant role in explaining unit costs. In future studies, greater attention needs to be paid to additional cost components like transaction costs and the presence of the co-benefits of avoided deforestation.

The avoidance of deforestation has major potential as a means of tackling global climate change (IPCC, 2000, Houghton, 2005, Stern, 2006, Nabuurs et al., 2007 and Eliasch, 2008). The most important reason for this is that deforestation is one of the largest sources of anthropogenic greenhouse gas emissions (Nabuurs et al., 2007). According to Houghton (2005), deforestation accounts for a quarter of all such emissions. Secondly, deforestation can be avoided at relatively modest cost compared with alternative carbon emission abatement measures in other economic sectors. What makes avoided deforestation economically competitive is that no new technology is required to facilitate action and opportunity costs are likely to be low, since deforestation occurs mainly in tropical developing countries (Sedjo et al., 1995, van Kooten et al., 2004 and Hope and Castilla-Rubio, 2008). In his review of 29 regional empirical studies, Boucher (2008) found that the costs of reducing emissions from deforestation (RED) in developing countries compare favourably to parallel costs in fossil fuel sectors and are lower than current carbon prices in the European Union's Emissions Trading Scheme (ETS). Besides reducing carbon emissions, avoided deforestation also delivers other benefits, such as biodiversity conservation and watershed and soil quality protection (Sedjo et al., 1995, Chomitz and Kumari, 1998, Ebeling and Yasué, 2008, Stickler et al., 2009, World Bank, 2011 and Strassburg et al., 2012). In this respect, RED avoids the drawbacks of other forestry-related options to reduce emissions, such as afforestation and reforestation, which tend to favour monoculture over the preservation of exotic species (Brown et al., 2008). In practice, however, taking these additional benefits into account may well increase transaction costs, while the extent to which RED can deliver co-benefits is very much context-dependent (Ebeling and Yasué, 2008 and Strassburg et al., 2012). Until now, the costs of reducing carbon emissions in the forestry sector have been systematically reviewed using mainly qualitative approaches (Sedjo et al., 1995, Chomitz and Kumari, 1998, van Kooten et al., 2004, Ebeling and Yasué, 2008, Stickler et al., 2009 and World Bank, 2011). To our knowledge, there are only two studies in which such a review has been based on quantitative meta-regression models. van Kooten et al. (2004) initially reviewed 55 studies, followed by van Kooten et al. (2009), who examined 68 studies covering a wide range of literature published between 1989 and 2007. These meta-analyses are helpful in synthesizing the empirical findings of a large number of studies, as they quantify and explain the costs of various types of forestry activities on a global scale in developed and developing countries, including avoiding deforestation, afforestation, reforestation and more general forest management. Given the breadth of these two existing meta-analyses in both the developed and developing world, however, they allow for less detailed investigation of relevant issues in a specific context, for instance the costs and co-benefits of RED in developing countries. The present study performs a new meta-analysis, the main objective of which is to assess and explain the relationships between the unit cost of avoided deforestation and its main driving factors in developing countries, which have continued to witness large-scale deforestation over the past decade (FAO, 2010). Besides presenting an update of existing studies up to and including 2012, the meta-analysis presented here builds on the two earlier meta-analyses by including new variables, with the aim of further explaining the observed variation in the cost estimates of avoided deforestation. These new variables relate to factors ‘internal’ to the studies themselves, such as inclusion of additional cost components like transaction costs, co-benefits of forest conservation, alternative land uses and beneficiaries of non-forested land uses, and ‘external’ factors taken from sources outside the studies, such as past and current deforestation rates in the study area and the share of agriculture in Gross Domestic Product (GDP), as an indicator of an economy's dependence on agriculture and corresponding influence on opportunity costs. This article is structured as follows. Section “Methodology” presents the methodology of our meta-analysis. In Section “Data description” we describe in detail the data set employed in the meta-regression model. The main results derived from the meta-analysis and their economic implications are discussed in Section “Estimated meta-regression model”. Section “Conclusion” concludes the article.

In this study, a meta-regression analysis was used to examine and test the relationship between the unit cost of avoided deforestation in developing countries and its main underlying driving factors. Given the fact that deforestation has significantly accelerated in developing countries in recent decades, the results of this study are deemed to be of special relevance for forest conservation projects implemented in these specific regions. Our results may serve as a reference point for cases where cost estimates are not available yet. Compared with previous meta-analyses, the present analysis zoomed in on the economic costs of avoided deforestation in developing countries in Africa, Asia and Latin America. This resulted in the creation of a new database and new additional variables that are believed to significantly govern the cost per tonne of carbon in forest conservation projects. These new variables relate to factors ‘internal’ to the studies themselves, such as inclusion of additional cost components like transaction costs, co-benefits of forest conservation, alternative land uses and beneficiaries of non-forested land uses, and to ‘external’ factors taken from sources outside the studies such as deforestation rates in the study area and the share of agriculture in GDP, as indicators of land use pressures. Data related to the cost and carbon accounting methodology employed in each primary study, alternative non-forested land uses and their beneficiaries, and other location- or region-specific factors were collected from 32 studies, providing a total of 227 observations. The unit costs of avoided deforestation were regressed against these explanatory variables using several different regression models, yielding significantly correlated estimates between and within studies. At the same time this permitted testing of the robustness and stability of the factors that have a significant impact on the unit cost. Sensitivity analysis was also carried out to test the possible effect of oversampling across primary studies, the extrapolation and upscaling of data from original studies, and the use of independent variables, which jointly make up the response variable (discount rate, carbon density, and time horizon). Results from these tests further confirm the robustness of our estimated models. This study confirms that in developing countries, the magnitude of the unit costs depends significantly on a mixture of both study design and context factors, with 5 out of the 11 design related and 4 out of the 8 context related variables showing a significant impact on the unit cost. Amongst those are the method used to calculate costs (averaging and option ranking approaches based on empirically collected data yield ceteris paribus lower cost estimates than econometric models), the rate used to discount costs over time (a higher discount rate results in lower unit costs) and carbon density (the higher the carbon density, the lower the unit costs). Compared with findings in van Kooten et al. (2009), the amount of carbon stored per hectare of land was also here found to play a significant role in driving the cost per unit of carbon emission reduction, despite the fact that the carbon accounting procedures used in the different studies face substantial uncertainties and require considerable investments in both technology and capacity building, especially in the developing world. In addition, we find that the inclusion of additional cost components, prior logging, area size, alternative land uses (logging rather than cropping), beneficiaries of non-forest land uses (private rather than state) and land use pressure measured via the share of agriculture in GDP all have a significant positive effect on the unit costs of avoided deforestation. Our results suggest, furthermore, that forest conservation projects appear to be cheaper if implemented in Africa rather than Latin America or South-East Asia. It should be borne in mind, however, that most of the studies examined here possibly neglected other relevant factors, including the transaction costs related to weak institutions and limited governance capacity in the regions concerned. Taking into account transaction costs will certainly raise the costs of avoided deforestation, thereby challenging the cost-effectiveness of conservation projects in developing countries. Our effort invested in identifying and categorizing different cost features in the database has shown that incorporating more cost components into the calculation influences the magnitude of the unit cost estimate. Contrary to expectations, none of the two newly introduced variables “co-benefits” and “deforestation rate” appears to have a significant effect on the unit costs of avoided deforestation. Future research should focus more explicitly on these additional cost components, non-market co-benefits of forest conservation, and deforestation rates.