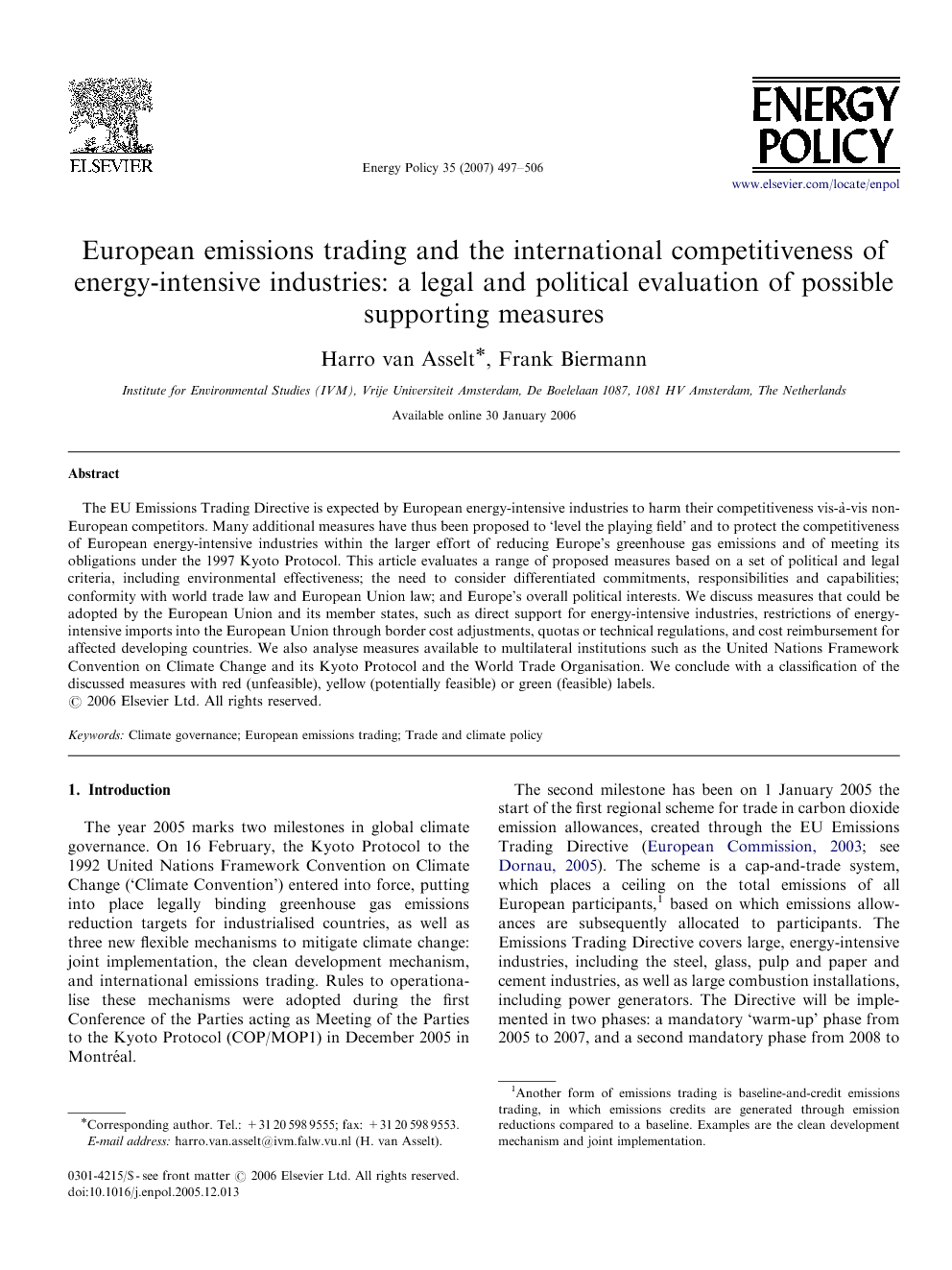 The EU Emissions Trading Directive is expected by European energy-intensive industries to harm their competitiveness vis-à-vis non-European competitors. Many additional measures have thus been proposed to ‘level the playing field’ and to protect the competitiveness of European energy-intensive industries within the larger effort of reducing Europe's greenhouse gas emissions and of meeting its obligations under the 1997 Kyoto Protocol. This article evaluates a range of proposed measures based on a set of political and legal criteria, including environmental effectiveness; the need to consider differentiated commitments, responsibilities and capabilities; conformity with world trade law and European Union law; and Europe's overall political interests. We discuss measures that could be adopted by the European Union and its member states, such as direct support for energy-intensive industries, restrictions of energy-intensive imports into the European Union through border cost adjustments, quotas or technical regulations, and cost reimbursement for affected developing countries. We also analyse measures available to multilateral institutions such as the United Nations Framework Convention on Climate Change and its Kyoto Protocol and the World Trade Organisation. We conclude with a classification of the discussed measures with red (unfeasible), yellow (potentially feasible) or green (feasible) labels.

The year 2005 marks two milestones in global climate governance. On 16 February, the Kyoto Protocol to the 1992 United Nations Framework Convention on Climate Change (‘Climate Convention’) entered into force, putting into place legally binding greenhouse gas emissions reduction targets for industrialised countries, as well as three new flexible mechanisms to mitigate climate change: joint implementation, the clean development mechanism, and international emissions trading. Rules to operationalise these mechanisms were adopted during the first Conference of the Parties acting as Meeting of the Parties to the Kyoto Protocol (COP/MOP1) in December 2005 in Montréal. The second milestone has been on 1 January 2005 the start of the first regional scheme for trade in carbon dioxide emission allowances, created through the EU Emissions Trading Directive (European Commission, 2003; see Dornau, 2005). The scheme is a cap-and-trade system, which places a ceiling on the total emissions of all European participants,1 based on which emissions allowances are subsequently allocated to participants. The Emissions Trading Directive covers large, energy-intensive industries, including the steel, glass, pulp and paper and cement industries, as well as large combustion installations, including power generators. The Directive will be implemented in two phases: a mandatory ‘warm-up’ phase from 2005 to 2007, and a second mandatory phase from 2008 to 2012, which corresponds to the commitment period of the Kyoto Protocol. Allowances are to be allocated by national governments among all participants according to procedures laid down in the Directive. In the first phase, the Directive will cover only carbon dioxide emissions, with the option to include other greenhouse gases in its second phase. The allowances are primarily allocated for free (‘grandfathering’). In addition, governments may auction 5% of allowances in the first phase and 10% in the second. The entry into force of both the Kyoto Protocol and the Emissions Trading Directive has resulted in a variety of potential or real impacts on trade relations between European producers and their international competitors that operate in countries that do not fall under the Kyoto regime2 or that have otherwise less strict climate policies in place3. This situation has given rise to much debate in academic and policy literature.4 European energy-intensive industries, in particular, have argued that the start of the EU emissions trading scheme will reduce their competitiveness (Pocklington, 2002).5 These industries bring forward two key concerns: First, due to strong competition in a global market and their past efforts to curb carbon dioxide emissions, European energy-intensive industries fear difficulties in purchasing the needed additional allowances or in achieving the additional energy efficiency. It is also not always possible for energy-intensive industries to pass on their costs—in part or in full—to consumers (Egenhofer et al., 2005; Reinaud, 2005). Second, it is feared that the Emissions Trading Directive would increase electricity prices in Europe, which would raise costs for energy-intensive industries (Egenhofer et al., 2005; Reinaud, 2005; Sijm, 2004; Sijm et al., 2005). The key argument of energy-intensive industries is that producers in non-EU countries, which are not subject to similar restrictions, will not have to bear these additional costs. The Directive would thus create an ‘unequal playing field’ in international markets and harm industries, employment and economic growth in the European Union. A large variety of supporting measures have been proposed by representatives of European energy-intensive industries, politicians, environmentalists, academics and think-tanks concerned about the effectiveness of European climate policies and its negative economic consequences. To be effective and practically feasible, these measures must face a number of demanding tests within the current legal and political context. They must guarantee full environmental effectiveness in accordance with the legally binding climate commitments of the European Union; they must be in accordance with a number of other legal standards of the climate regime, in particular the principle of common but differentiated responsibilities and capabilities; they must not violate world trade law or European Union law; and they must not seriously harm other interests of the European Union, including its overall relations with non-European partner nations, notably the United States. These tests, however, have not yet been systematically applied to the host of measures discussed in the literature for adjusting the ‘unequal playing field’ that the Emissions Trading Directive might have created for European energy-intensive industries in the world trade system. This article is therefore a first attempt at providing this assessment. Section 2 will elaborate the five core tests that any legal or political measure at ‘adjusting’ the ‘unequal playing field’ for European energy-intensive industries must pass. 3, 4 and 5 describe and review a range of potential policy measures that could be adopted, and analyse to what extent the five tests used in this study will be met. Our analysis covers measures that could be adopted by the European Union and its member states (Section 3); measures that could be adopted by multilateral institutions and organisations, including the World Trade Organisation (WTO) and the Climate Convention (Section 4); as well as measures that could be adopted by affected firms or business associations (Section 5). In Section 6, we conclude by classifying the options into three categories according to their legal and political feasibility. We restrict our analysis to legal and political criteria and exclude economic constraints, such as the cost-effectiveness of measures. Likewise, we merely assume, as a theoretical hypothesis based on some evidence in the literature, that the Emissions Trading Directive would lead to ‘an unequal playing field’ for energy-intensive industries. This relationship is not analysed in itself in this study. Finally, we restrict our analysis to direct effects for European energy-intensive industries. Additional measures—not further discussed in this article—could address the indirect effects of the Emissions Trading Directive on European energy-intensive industry, notably the overall increase in electricity prices. 6 Most of these measures require a revision of the Emissions Trading Directive. Although most measures are prima facie unproblematic from a legal point of view and under the purview of the EU competence to act, their applicability, including the political feasibility and environmental effectiveness, requires a more detailed assessment that is beyond the scope of this study.

This article has shown that a plethora of measures can be adopted to address a possible ‘unequal playing field’ for European energy-intensive industries resulting from the implementation of the EU Emissions Trading Directive. It provided a non-exhaustive list of potential measures that can be adopted by the European Union, its member states, multilateral institutions, and private parties such as the energy-intensive industries themselves. However, there is also a range of legal and political constraints that have tobe taken into account by governments that wish to adopt such measures. Some constraints clearly advise against certain potential measures, because they would violate world trade law or environmental law, or because it would be unrealistic to adopt these measures given the current state of world politics. Based on the legal and political evaluation criteria developed in Section 2, we can divide all possible measures into three categories: ‘ Green measures ’—measures that can be implemented without significant political or le gal constraints. These include: raising consumer awareness; voluntary, non-governmental climate labelling; limited subsidies or subsidies for climate-friendly pro- ducts ‘ Yellow measures ’—measures that may be feasible, even though their legal or political feasibility is still unclear or uncertain and requires further research: extend the clean development mechanism and joint implementation; border cost adjustments for imported product inputs or exports; large subsidies for affected European energy-intensive industries; mandatory, governmental climate labelling; energy efficiency regulations and standards applicable also for importers; exemptions for affected European energy-intensive industries; duties or taxes on energy-intensive imports from non- Kyoto countries. The following measures are legally (largely) unproble- matic, but politically unfeasible or undesirable: extension of Kyoto commitments to other countries; small-party agreements with non-European countries, including sector-wide agreements; harmonisation of technical standards in either WTO or Climate Convention; minimum standards for subsidies for affected energy- intensive industries. ‘ Red measures ’—measures that are either illegal under current law or politically unfeasible, including unfeasible regarding a reform of the current law. These include: lower carbon constraints (which would endanger the legally binding Kyoto targets); quotas or bans in trade with non-parties to the Kyoto Protocol; reform of the General System of Preferences that would require developing countries to exceed commitments under the Kyoto Protocol;punitive tariffs or taxes (which are politically and/or legally unfeasible); initiation of a WTO dispute based on lack of cost internalisation. Finally, it is important to note that regarding most measures discussed in this article, a final evaluation will always depend on the exact definition and implementation of the measure. In other words, many measures could be either legal or illegal, or politically feasible or infeasible, depending on how exactly they are framed and designed. We hope that this article has helped to develop some guidelines on key design questions that need to be addressed.