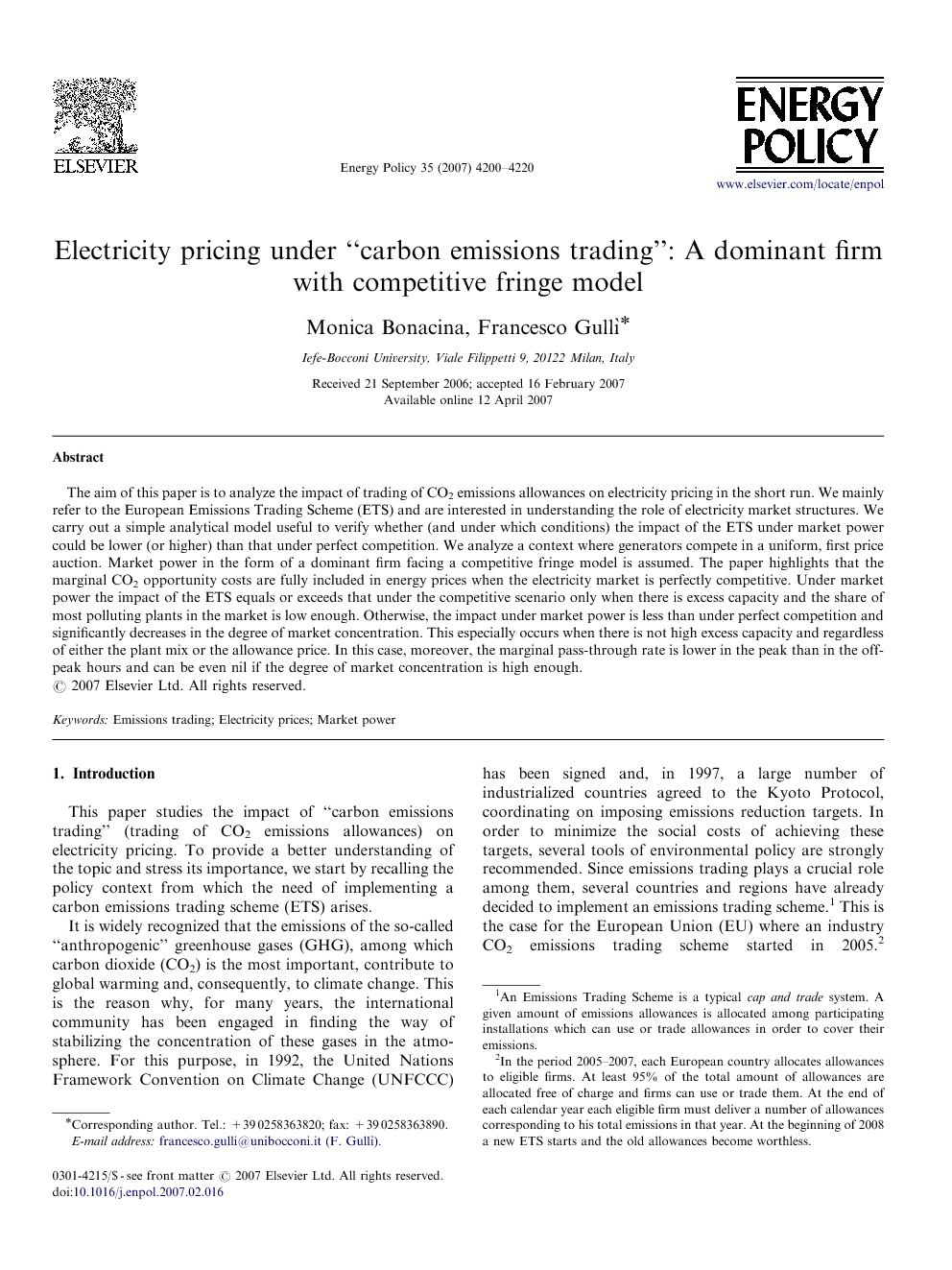 The aim of this paper is to analyze the impact of trading of CO2 emissions allowances on electricity pricing in the short run. We mainly refer to the European Emissions Trading Scheme (ETS) and are interested in understanding the role of electricity market structures. We carry out a simple analytical model useful to verify whether (and under which conditions) the impact of the ETS under market power could be lower (or higher) than that under perfect competition. We analyze a context where generators compete in a uniform, first price auction. Market power in the form of a dominant firm facing a competitive fringe model is assumed. The paper highlights that the marginal CO2 opportunity costs are fully included in energy prices when the electricity market is perfectly competitive. Under market power the impact of the ETS equals or exceeds that under the competitive scenario only when there is excess capacity and the share of most polluting plants in the market is low enough. Otherwise, the impact under market power is less than under perfect competition and significantly decreases in the degree of market concentration. This especially occurs when there is not high excess capacity and regardless of either the plant mix or the allowance price. In this case, moreover, the marginal pass-through rate is lower in the peak than in the off-peak hours and can be even nil if the degree of market concentration is high enough.

Carbon emissions trading may cause a rise in electricity prices due to the pass-through of the carbon opportunity cost. The analysis described in this paper highlights that the extent of this effect significantly depends on electricity market structures. Electricity prices fully internalize the marginal opportunity cost of CO 2 emissions allowances when electricity market is assumed to be perfectly competitive. Under market power the impact on the volume-weighted average price can be lower or higher than that under competition depending on several factors: (1) the degree of market concentration, (2) the plant mix operated by either the dominant firm or the competitive fringe, (3) the price of the CO 2 emissions allowances; (4) theavailable capacity in the market (whether there is excess capacity or not). In particular, the model points out that under market power the ETS impact is higher than under perfect competition only when there is excess capacity and the share of the most polluting plants in the market is low enough. Otherwise, and especially without excess capacity, the impact under market power is less than under competition and significantly decreases in the degree of market concentration. In addition, looking at the time distribution of impacts, it can be observed that, under market power, the marginal pass-through rate in the peak hours can be less 100% and lower than that in the off-peak hours. This especially occurs when there is not high excess capacity and regardless of either the plant mix or the allowance price. In this case the marginal pass-through rate is even nil if the degree of market concentration is high enough.The model set out here is simple. Reality, in fact, will be more complex. For instance, power technology mix is generally more heterogeneous than assumed here, where only two kinds of technologies have been taken into account (excluding the backstop technology).Furthermore, one may remark that the competition model is not close to reality of power markets. This objection, however, is not entirely convincing. In fact, simulating a competition context in which market power emerges from the strategic behavior of a dominant firm is,in our opinion, a good representation of several markets and especially of those emerging from restructuring processes where the incumbent is obliged to sell a portion of his capacity to different firms and new independent power producers meet the rise in the power demand over time. The case of the Italian market is emblematic from this point of view. However, we cannot ignore that assuming the other firms (other than the leader) behave as a competitive fringe might be unrealistic. This assumption might be acceptable if we are looking at a market just emerging from a restructuring process but less acceptable if we look at the longer term. In this case, effects of concentra- tion and tacit coordination within the fringe (and possibly among the fringe and the leader) are more likely so that simulating a context in which two or more strategicfirms face a competitive fringe could be closer to the reality. Nevertheless, what is assumed in this paper remains, in our opinion, a good benchmark and an useful starting point for further research. However, other kinds of strategic behavior as well as electricity market regulations (i.e. discriminatory auction, contract market, etc.) should be investigated. In addition, appropriate empirical analyses need in order to check what simulating models suggest.