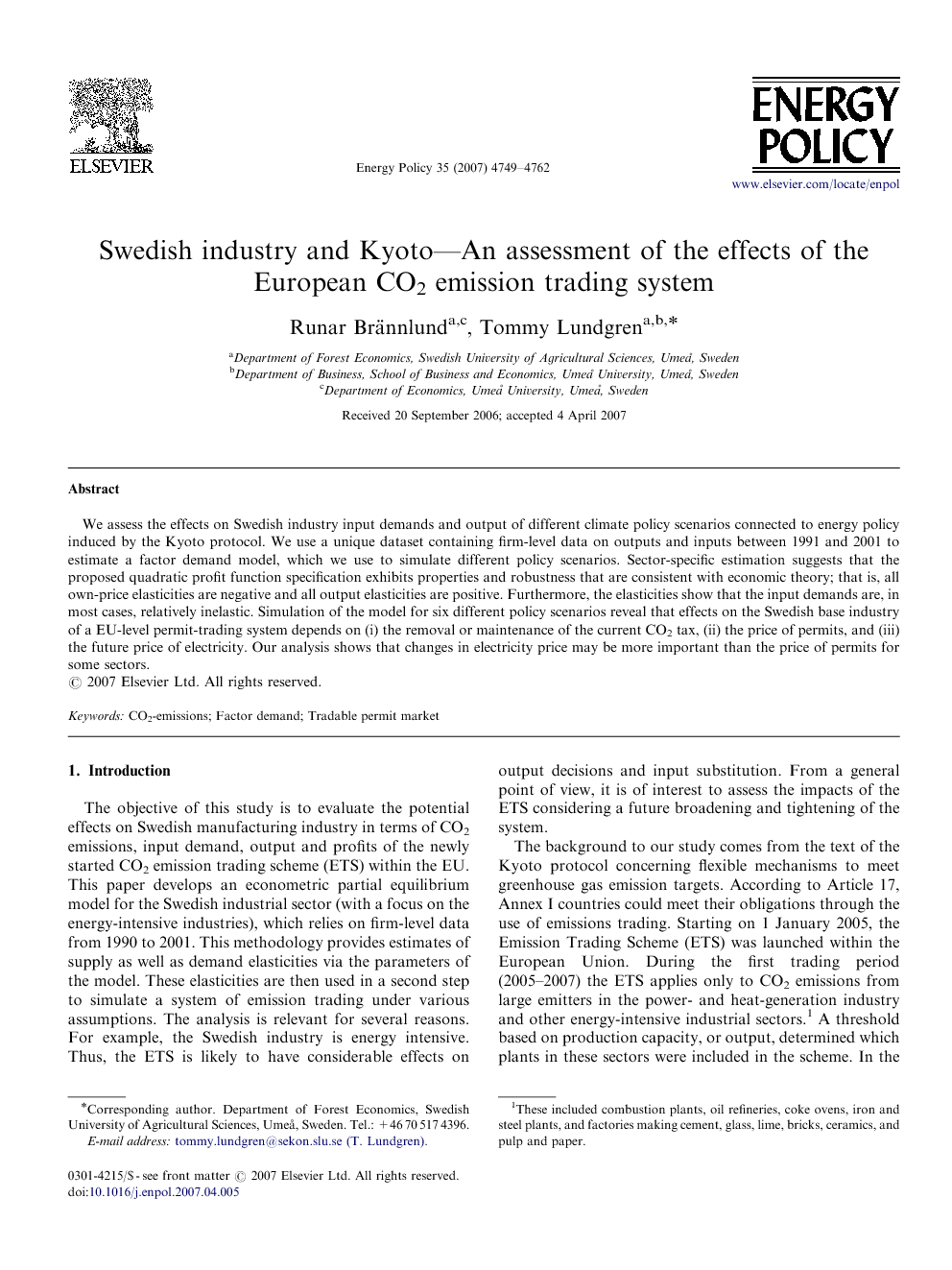 We assess the effects on Swedish industry input demands and output of different climate policy scenarios connected to energy policy induced by the Kyoto protocol. We use a unique dataset containing firm-level data on outputs and inputs between 1991 and 2001 to estimate a factor demand model, which we use to simulate different policy scenarios. Sector-specific estimation suggests that the proposed quadratic profit function specification exhibits properties and robustness that are consistent with economic theory; that is, all own-price elasticities are negative and all output elasticities are positive. Furthermore, the elasticities show that the input demands are, in most cases, relatively inelastic. Simulation of the model for six different policy scenarios reveal that effects on the Swedish base industry of a EU-level permit-trading system depends on (i) the removal or maintenance of the current CO2 tax, (ii) the price of permits, and (iii) the future price of electricity. Our analysis shows that changes in electricity price may be more important than the price of permits for some sectors.

The objective of this study is to evaluate the potential effects on Swedish manufacturing industry in terms of CO2 emissions, input demand, output and profits of the newly started CO2 emission trading scheme (ETS) within the EU. This paper develops an econometric partial equilibrium model for the Swedish industrial sector (with a focus on the energy-intensive industries), which relies on firm-level data from 1990 to 2001. This methodology provides estimates of supply as well as demand elasticities via the parameters of the model. These elasticities are then used in a second step to simulate a system of emission trading under various assumptions. The analysis is relevant for several reasons. For example, the Swedish industry is energy intensive. Thus, the ETS is likely to have considerable effects on output decisions and input substitution. From a general point of view, it is of interest to assess the impacts of the ETS considering a future broadening and tightening of the system. The background to our study comes from the text of the Kyoto protocol concerning flexible mechanisms to meet greenhouse gas emission targets. According to Article 17, Annex I countries could meet their obligations through the use of emissions trading. Starting on 1 January 2005, the Emission Trading Scheme (ETS) was launched within the European Union. During the first trading period (2005–2007) the ETS applies only to CO2 emissions from large emitters in the power- and heat-generation industry and other energy-intensive industrial sectors.1 A threshold based on production capacity, or output, determined which plants in these sectors were included in the scheme. In the first trading phase, approximately 11,500 installations in the 25 Member States are covered, accounting for approximately 45% of the EU's total CO2 emissions (European Commission, 2005). Due to the relatively energy intensive nature of Swedish industry it is of interest, for at least two reasons, to study the effects on the Swedish industry. Firstly, the ETS will imply an explicit price on CO2, which directly affects the industry in the form of a price increase for fuels that emit CO2 (primarily fossil fuels). Secondly, and perhaps more important is the indirect effect on the market for electricity. This indirect effect is that the ETS will likely impose additional costs on fossil-fuel-intensive electricity generation in Europe, which in turn may put an upward pressure on the price of electricity. Since the electricity markets have become more integrated this effect may spill over also on the Swedish electricity market in terms of higher prices. This in turn may have significant effects on the Swedish industry. In Section 5, we use our estimated econometric model, in conjunction with several policy scenarios, to simulate these potential impacts. The use of a partial equilibrium econometric approach is based on the availability of a large time-series/cross-sectional dataset. The panel set includes all firms with more than 5 employees within the industrial sector between 1990 and 2001. An alternative modeling approach for these data might be to employ a computable general equilibrium model (CGE). This approach was used in Hill and Kriström, 2002 and Hill and Kriström, 2005, and Nilsson and Kriström (2002), where policy scenarios similar to those in this paper were evaluated. The most obvious advantage of the econometric approach, however, is that the estimated parameters of the model are based on actual firm behavior in several time periods, a property that too often is lacking in the CGE approach. CGE analysis will, although mainly based on single-period data and often ad hoc parameterization, have the ability to track repercussions throughout the whole economy, not just the sector analyzed. This is by assumption not possible in partial equilibrium econometric models. From our perspective the two modeling approaches have their pros and cons, and serve more as complements to each other. The paper is structured as follows. We briefly present the theoretical model underlying the empirical analysis in Section 2, and data and the final empirical specification in Section 3. We provide the estimation results in the form of output and demand elasticities in Section 4. In Section 5, we present various simulations given different assumptions about the permit market, current CO2 tax, and electricity price. Section 6 contains some concluding comments.

The purpose of this paper is to shed light on the effects of introducing an EU-level permit market for CO 2 emissions on the Swedish base industry in general and on the permit trading sector in particular. By ‘‘effects’’ we mean changes in factor demand, output, emissions, and profits. Sector-specific estimation of output and factor demand, and profit functions exhibit properties and robustness that are consistent with economic theory; that is, all own-price elasticities are negative and all output elasticities are positive. Furthermore, the elasticities show that the demands are, in most cases, relatively inelastic. Simulation of the model for six different policy scenarios suggest that the effects on Swedish base industry of a permit trade system depends on (i) the removal or maintenance of the current CO 2 tax, (ii) the price of permits, and (iii) the future price of electricity Our analysis shows that changes in electricity price may be more important than the price of permits for some sectors. Note, however, that the price of electricity is dependent on the price of permits, which in turn depends on the number of permits issued throughout the whole European trading system. The results presented in this article are basically in line with CGE studies performed recently on the Swedish economy with similar scenarios (see Hill and Kristro ̈ m 2002, 2005 ; Nilsson and Kristro ̈ m, 2002 ). From a policy point of view the introduction of ETS has the expected impacts on industry. Moreover, the size of the impactsis dependent on the price of permits and how electricity prices are connected to the price of carbon at the European level. Finally, we would like to stress that simulations of the type performed in this paper are not without flaws. The underlying parameters should be viewed as ‘‘local approximations’’ and simulations that stretch beyond the price fluctuations observed historically in the data are uncertain. 17 As a consequence sim5 and sim6, the most extreme scenarios, should be interpreted with care. Careful interpretation is also motivated by the partial equilibrium setting used here. There are reasons to believe that policy reforms of the kind simulated here will have effects on other markets. For example we cannot rule out possible effects on the labor market. However, the effects on wage setting and employment cannot be determined a priori without further assumptions about the functioning of the labor market. This in turn implies that we cannot make a conclusive statement about the final effects on the industry. There are at least two reasons for this. The first is that the simulations per se do not take into account possible interactions. The second is that the estimated parameters in our model may be biased due to endogenous right-hand side variables, such as the wage rate. Thus, a high priority for future research will be the inclusion of the labor market explicitly into this kind of model. This would not only potentially improve the quality of the results when evaluating policy reforms like the one here, but also contribute to the understanding of how wage setting and employment is affected by such reforms.