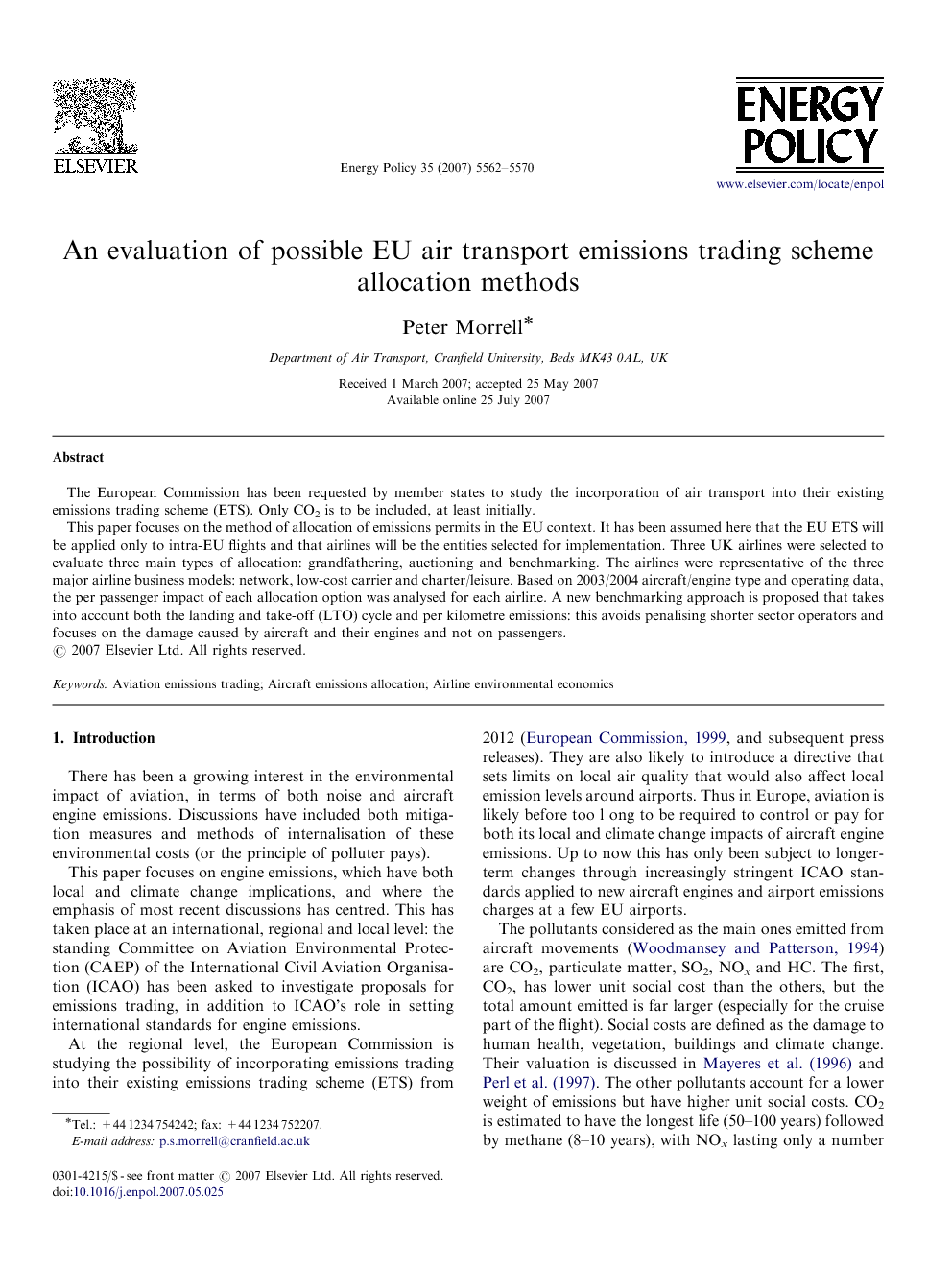 The European Commission has been requested by member states to study the incorporation of air transport into their existing emissions trading scheme (ETS). Only CO2 is to be included, at least initially. This paper focuses on the method of allocation of emissions permits in the EU context. It has been assumed here that the EU ETS will be applied only to intra-EU flights and that airlines will be the entities selected for implementation. Three UK airlines were selected to evaluate three main types of allocation: grandfathering, auctioning and benchmarking. The airlines were representative of the three major airline business models: network, low-cost carrier and charter/leisure. Based on 2003/2004 aircraft/engine type and operating data, the per passenger impact of each allocation option was analysed for each airline. A new benchmarking approach is proposed that takes into account both the landing and take-off (LTO) cycle and per kilometre emissions: this avoids penalising shorter sector operators and focuses on the damage caused by aircraft and their engines and not on passengers.

There has been a growing interest in the environmental impact of aviation, in terms of both noise and aircraft engine emissions. Discussions have included both mitigation measures and methods of internalisation of these environmental costs (or the principle of polluter pays). This paper focuses on engine emissions, which have both local and climate change implications, and where the emphasis of most recent discussions has centred. This has taken place at an international, regional and local level: the standing Committee on Aviation Environmental Protection (CAEP) of the International Civil Aviation Organisation (ICAO) has been asked to investigate proposals for emissions trading, in addition to ICAO's role in setting international standards for engine emissions. At the regional level, the European Commission is studying the possibility of incorporating emissions trading into their existing emissions trading scheme (ETS) from 2012 (European Commission, 1999, and subsequent press releases). They are also likely to introduce a directive that sets limits on local air quality that would also affect local emission levels around airports. Thus in Europe, aviation is likely before too long to be required to control or pay for both its local and climate change impacts of aircraft engine emissions. Up to now this has only been subject to longer-term changes through increasingly stringent ICAO standards applied to new aircraft engines and airport emissions charges at a few EU airports. The pollutants considered as the main ones emitted from aircraft movements (Woodmansey and Patterson, 1994) are CO2, particulate matter, SO2, NOx and HC. The first, CO2, has lower unit social cost than the others, but the total amount emitted is far larger (especially for the cruise part of the flight). Social costs are defined as the damage to human health, vegetation, buildings and climate change. Their valuation is discussed in Mayeres et al. (1996) and Perl et al. (1997). The other pollutants account for a lower weight of emissions but have higher unit social costs. CO2 is estimated to have the longest life (50–100 years) followed by methane (8–10 years), with NOx lasting only a number of days or weeks. However, the global warming impact from aviation is compounded by the emissions of NOx and water vapour in the upper atmosphere, the latter sometimes leading contrails and cirrus cloud formation (these effects are summarised in Annex 2 of European Commission, 2005). This is difficult to deal with through an ETS and it is intended to address it through other measures, one of which (standards) is discussed below. Europe is the region of the world with the greatest pressure to reduce emissions, and it is also the region where almost all of the countries have ratified the Kyoto Convention. The EU has also pushed for the inclusion of environmental impacts in the EU/US aviation bilateral agreement. Growing concern is also evident in other world regions, reflected in the work programme of ICAO referred to above. The first section of this paper will discuss Kyoto and the context for emissions trading, and the efforts at an international and regional level to reduce aircraft engine emissions. This will be followed by a look at the various voluntary measures (targets) initiated by the industry. The fact that such progress is too slow (see ECAC, 2005) leads to the need for imposing incentives, which can be addressed through emissions trading.

A number of previous studies have examined the possible impact of various ways of implementing a European ETS. These have highlighted possible distortions, without investigating the impact on specific airlines (apart from the limited Wright, 2004, analysis) or business models. This paper attempts to do this for three UK airlines: the network carrier, British Airways, a major European LCC, easyJet, and one of the largest charter/leisure airlines, Britannia/Thomsonfly (itself part of a pan-EU group). It is argued that this gives a good indication of the relative impact on the business models, although a broader sample would be needed to be able to form any robust conclusions on the specific impacts. The above analysis assumes that an EU ETS for aviation would be only applied to intra-EU flights. This raises significant distortions by itself, but appears at present the most likely approach. The focus has been on the three major types of allocation system: grandfathering/baseline, auctioning and benchmarking. The analysis has been based on recent data for each of the airlines (2003 and 2004). To examine the impact over 2005 and 2006, traffic growth rates have assumed to be 4% for British Airways for each year, 30% and 15% for easyJet, and 10% for Britannia/Thomsonfly for both years. Cargo has been excluded on the basis of the minimum distortion it might cause for shorter haul routes. The summary in Fig. 2 shows that, as expected, the impact is greater on the LCC in all cases, although not by too much. This would be worse if the baseline had been based on less recent emissions. Thus the cap is lenient, the main purpose being to give an incentive to airlines (or other industries) to reduce pollution in the future. The position of Britannia depends to a large extent on how far its LCC (Thomsonfly) grows relative to its tour operator/leisure flights.The baseline or grandfathering approach tends to penalise the faster growing LCC and favour the network carrier. The latter carries both long- and short-haul passengers on its intra-EU feeder services, and the cost could easily be absorbed in the total long-haul ticket price. It would, however, put the EU network carrier at a small disadvantage relative to foreign hub carriers in the same markets. Auctioning (favoured by the CE Delft, 2005, study) is the most costly option for airlines, and needs further evaluation in terms of how the proceeds are used, and hybrid schemes. Benchmarking is the second choice of the CE Delft (2005) study and a possible approach has been discussed in ICAO's CAEP. An alternative is proposed here of splitting the benchmark into an LTO and distance flown elements. This is more complex in terms of data collection and monitoring, but avoids the sector length distortion and does not penalise low emissions smaller aircraft.