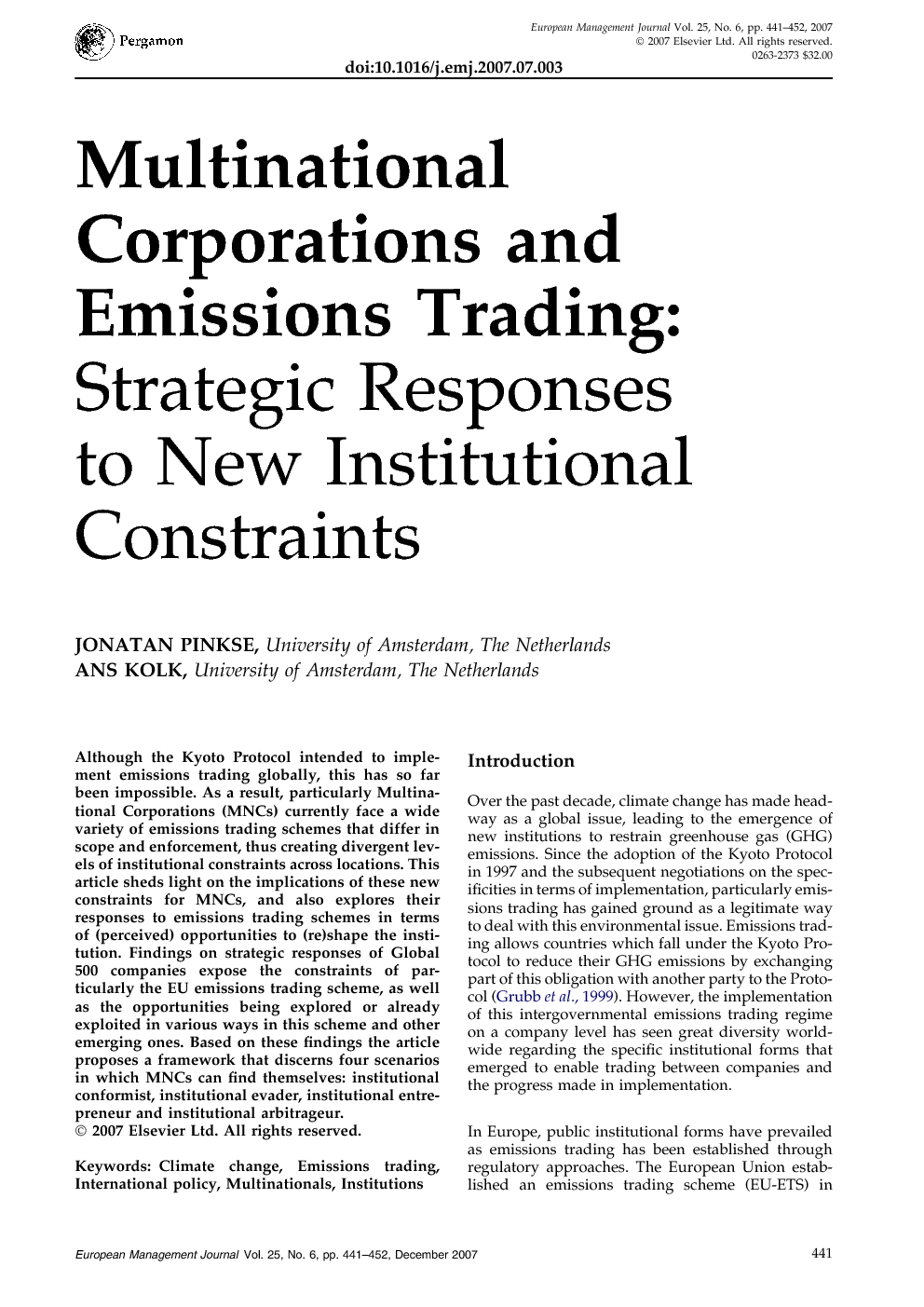 Over the past decade, climate change has made headway as a global issue, leading to the emergence of new institutions to restrain greenhouse gas (GHG) emissions. Since the adoption of the Kyoto Protocol in 1997 and the subsequent negotiations on the specificities in terms of implementation, particularly emissions trading has gained ground as a legitimate way to deal with this environmental issue. Emissions trading allows countries which fall under the Kyoto Protocol to reduce their GHG emissions by exchanging part of this obligation with another party to the Protocol (Grubb et al., 1999). However, the implementation of this intergovernmental emissions trading regime on a company level has seen great diversity worldwide regarding the specific institutional forms that emerged to enable trading between companies and the progress made in implementation. In Europe, public institutional forms have prevailed as emissions trading has been established through regulatory approaches. The European Union established an emissions trading scheme (EU-ETS) in 2005, a step already taken by Denmark and the UK in respectively 1999 and 2002. In contrast, in the US and Australia, countries that have so far refused to ratify the Kyoto Protocol, emissions trading has emerged on a smaller scale at the sub-national level, sometimes as a public initiative, but with the establishment of the Chicago Climate Exchange also as a private arrangement. Several non-European industrialised countries that fall under the Kyoto Protocol, such as Japan and Canada, have not yet really implemented trading schemes. However, companies from these countries can use the other Kyoto mechanisms – Clean Development Mechanism (CDM) and Joint Implementation (JI) – to reduce emissions via reduction projects in developing countries or economies in transition. Thus, while climate change is still a global issue in its causes, manifestations and implications, and international policy regimes exist, the institutional forms of corporate-level emissions trading differ significantly across countries. This raises the question how multinational companies (MNCs) deal with this whole variety of institutional forms with which they are confronted. To this end, this article examines how MNCs act in response to newly created emissions trading schemes, taking a new-institutionalist perspective. This approach asserts that companies do not necessarily have to comply with institutional pressure, but can also choose to respond strategically by avoiding pressure or use their bargaining power to influence actors that enforce institutions (Child and Tsai, 2005, DiMaggio, 1988, Ingram and Silverman, 2002 and Oliver, 1991). In this article, we will first map existing and emerging emissions trading schemes, considering their main peculiarities, to identify the type of institutional constraints faced by MNCs. Subsequently, we will consider how these constraints can also lead to opportunities for MNCs to (re)shape the institutions (the so-called ‘institutional agency’). These analytical insights will then guide the subsequent empirical exploration of responses of Global 500 companies. Based on that, we will discuss the implications and propose a framework that presents different scenarios for strategic responses to emissions trading schemes.

With this paper we aimed to shed light on the way in which MNCs respond to new institutional con- straints for the reduction of greenhouse gases that cause climate change, focusing on one institution in particular: emissions trading. Although it was intended in the Kyoto Protocol to implement emis- sions trading globally, for MNCs it has become a globally fragmented institution instead and they face a wide variety of institutional forms that differ in scope and enforcement, thus creating different types of institutional constraints. We examined what the type of institutional constraint means for MNCs in terms of how they respond to emissions trading schemes and what opportunities they see for using institutional agency to (re)shape the institution. The empirical analysis of 331 Global 500 firms sug- gests that the EU-ETS forms the most prominent scheme and, as a consequence, most firms have their emissions trading activities linked to this scheme. Firms covered by the EU-ETS generally conform to the institutional constraint for compliance. However, the cap on emissions seems more important than the trading facility. Since many firms are included with a few installations only and overall emission allow- ances have been over-allocated, many MNCs have been able to escape the need to trade. As the EU- ETS is still forming, there have been quite some opportunities for institutional agency. Over the past years, energy producers appear to have been mostsuccessful in shaping the EU-ETS, but this has cre- ated unease on the part of large energy consumers, who may become institutional entrepreneurs them- selves in response. Of the firms not affected directly, particularly banks have been able to reshape the emission market by facilitating trading of others. Corporate activities in other, more local trading schemes are almost negligible, but may be of political significance in stimulating countries without a domestic trading scheme to set one up. Findings also show that even though a considerable number of MNCs has become engaged in emissions trading, many still avoid it. For these firms emissions trading is either not relevant or they are not covered by the EU-ETS and do not wish to become part of a volun- tary scheme. Nevertheless, such avoidance is no guarantee that firms will not have to deal with emis- sions trading in the near future, because trading schemes are gaining ground all over the world. Findings of this paper exemplify how crucial it is for managers to be aware of the development of emis- sions trading schemes. Otherwise, the high pace in recent policy developments may take them by sur- prise. Even if firms are currently not covered by a trading scheme, a potentially strong constraint of upcoming schemes should arouse firms to anticipate these as early as possible. It may thus be sensible to turn into institutional entrepreneurs – this seems to have paid off for electricity firms in the EU – instead of becoming dependent on institutional arbitrageurs who shape the institution to fit their own interests.