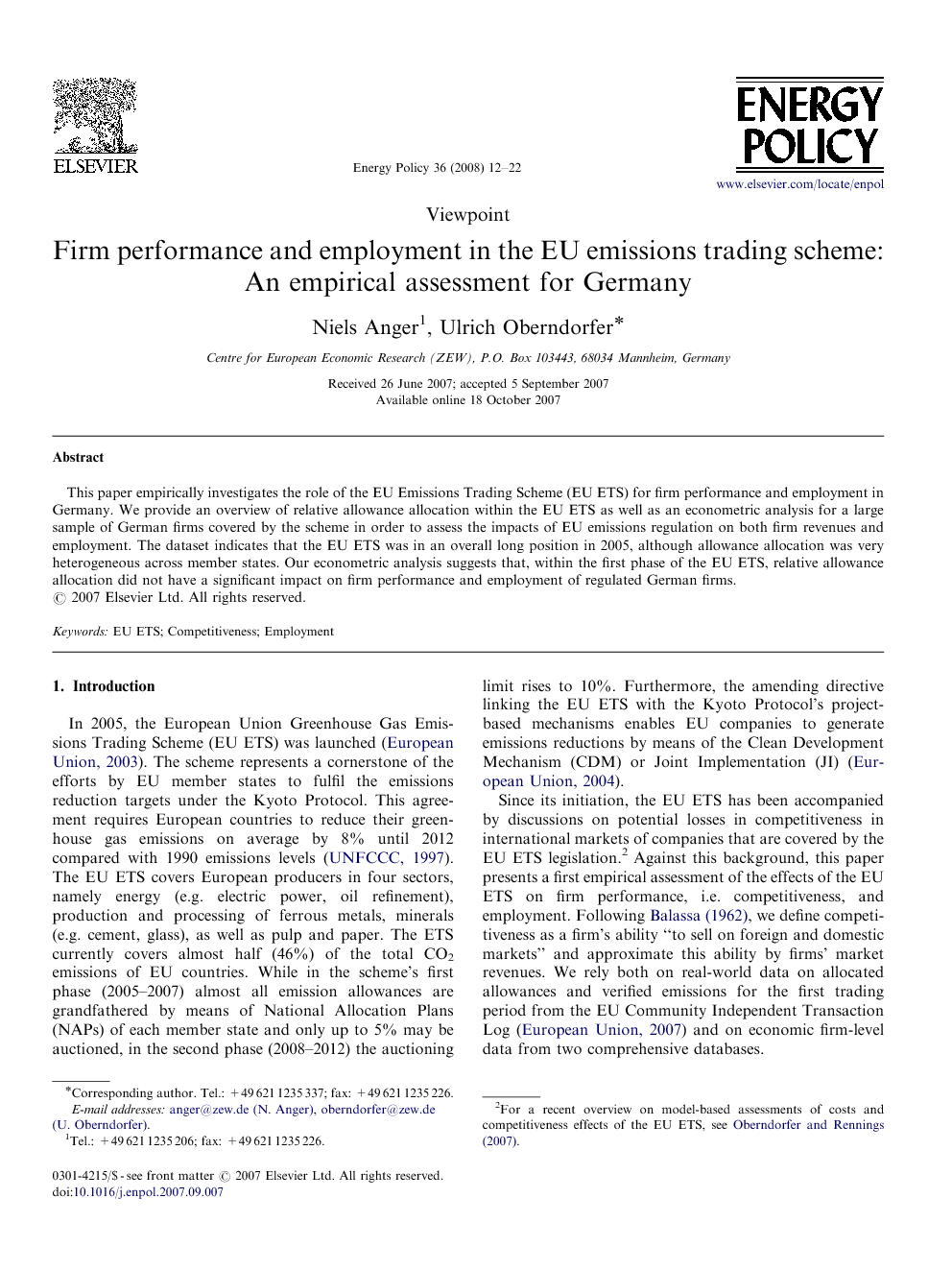 This paper empirically investigates the role of the EU Emissions Trading Scheme (EU ETS) for firm performance and employment in Germany. We provide an overview of relative allowance allocation within the EU ETS as well as an econometric analysis for a large sample of German firms covered by the scheme in order to assess the impacts of EU emissions regulation on both firm revenues and employment. The dataset indicates that the EU ETS was in an overall long position in 2005, although allowance allocation was very heterogeneous across member states. Our econometric analysis suggests that, within the first phase of the EU ETS, relative allowance allocation did not have a significant impact on firm performance and employment of regulated German firms.

In 2005, the European Union Greenhouse Gas Emissions Trading Scheme (EU ETS) was launched (European Union, 2003). The scheme represents a cornerstone of the efforts by EU member states to fulfil the emissions reduction targets under the Kyoto Protocol. This agreement requires European countries to reduce their greenhouse gas emissions on average by 8% until 2012 compared with 1990 emissions levels (UNFCCC, 1997). The EU ETS covers European producers in four sectors, namely energy (e.g. electric power, oil refinement), production and processing of ferrous metals, minerals (e.g. cement, glass), as well as pulp and paper. The ETS currently covers almost half (46%) of the total CO2 emissions of EU countries. While in the scheme's first phase (2005–2007) almost all emission allowances are grandfathered by means of National Allocation Plans (NAPs) of each member state and only up to 5% may be auctioned, in the second phase (2008–2012) the auctioning limit rises to 10%. Furthermore, the amending directive linking the EU ETS with the Kyoto Protocol's project-based mechanisms enables EU companies to generate emissions reductions by means of the Clean Development Mechanism (CDM) or Joint Implementation (JI) (European Union, 2004). Since its initiation, the EU ETS has been accompanied by discussions on potential losses in competitiveness in international markets of companies that are covered by the EU ETS legislation.2 Against this background, this paper presents a first empirical assessment of the effects of the EU ETS on firm performance, i.e. competitiveness, and employment. Following Balassa (1962), we define competitiveness as a firm's ability “to sell on foreign and domestic markets” and approximate this ability by firms’ market revenues. We rely both on real-world data on allocated allowances and verified emissions for the first trading period from the EU Community Independent Transaction Log (European Union, 2007) and on economic firm-level data from two comprehensive databases. Previous quantitative studies have assessed the efficiency aspects and competitiveness implications of the EU ETS predominantly in numerical modeling frameworks. Böhringer et al. (2005) show that the exclusive coverage of energy-intensive installations by EU ETS implies that—in the absence of the potential use of CDM and JI—the remaining industries have to be regulated by complementary abatement policies in order to meet the national Kyoto targets. Such a hybrid emission regulation can cause large inefficiencies within EU economies, but may also worsen the prospects of linking the EU ETS to emerging emissions trading schemes beyond Europe (see Anger, 2007). Unlike employment aspects of the EU ETS, competitiveness implications of the current European trading scheme have been analyzed in numerical model frameworks (Kemfert et al., 2005; Klepper and Peterson, 2004; Peterson, 2006). The sectoral competitiveness implications of allowance allocation under the EU ETS have been assessed both for the European electricity industry (Neuhoff et al., 2006) and for the cement sector (Demailly and Quirion, 2006). Enlarging the purely European perspective, Alexeeva-Talebi and Anger (2007) assess both the economy-wide and the sectoral competitiveness effects of linking the EU ETS internationally to emerging trading systems outside Europe (such as Japan, Canada or Australia) within an applied general equilibrium model framework. The previous empirical literature on emissions regulation under the EU ETS is rather scant. Analyzing the verified emissions of the participating installations as well as the respective allowances allocated, Ellerman and Buchner (2006) conclude that “over-allocation occurred and that its magnitude may have been as much as 100 million EU allowances”. Kettner et al. (2007) present similar findings, suggesting that in the first EU ETS trading year the scheme was in a long position regarding emissions allowances. Moreover, to date there is no empirical contribution available assessing the competitiveness or employment impacts of emissions allocation under the EU ETS. Our paper aims at starting to fill this gap. In this respect, the contribution of this analysis is twofold: Relying on installation-level allocation data from the EU Community Transaction Log in 2005, we (i) descriptively assess the relative allowance allocation under the EU ETS at the national level and (ii) econometrically test for competitiveness and employment impacts of the EU ETS for a large sample of German companies. The present article is structured as follows. Section 2 summarizes the empirical literature. Section 3 discusses the relative allowance allocation in Europe as well as the data underlying the empirical analysis for Germany. Section 4 presents the econometric assessment and Section 5 concludes.

This paper empirically investigates the role of the EU Emissions Trading Scheme (EU ETS) for competitiveness and employment at the firm level. We provide an overview over relative allowance allocation within the EU ETS, as well as an econometric analysis for a large sample of German ETS firms in order to assess the economic impacts associated with emissions allocation under the EU ETS. Our calculations suggest that the total EU ETS was generally long in 2005. The long position is very large in Lithuania, while other countries were short in emissions allowances. Regarding the competitiveness effects of EU environmental regulation, we conduct an econometric ex- post regression analysis for Germany, which, to our knowledge, is the first of its kind concerning the EU ETS. Following the competitiveness concept ‘‘ability to sell’’, as an empirical indicator for competitiveness we employ firm revenues. As a second economic indicator we use employment levels of the respective firms. Our econometric analysis provides evidence on the fact that the allowance allocation within the EU ETS framework did not have a significant impact on revenues and employment of regulated German firms. Our results thus suggest thatfor regulated companies the competitiveness impacts of the emissions allocation within the first phase of the EU ETS were not pronounced. This finding could be due to the low overall burden of emissions regulation within the EU ETS. Some disclaimers apply to these results. First, it is definitely very early to conduct an ex-post analysis for the EU ETS. In this respect, it is possible that competitiveness effects of this regulation could occur after 2005. Consistent economic firm data at a European level for 2005 or later were not available to us, so that our—first, and, due to the small dataset, basic—econometric analysis could only be performed within a case study for Germany, the most important country within the EU ETS according to the verified emissions. Furthermore, ex-post analyses do not have to be restricted to revenues and employment, although these are definitely two factors of great interest in the context of environmental regulation. Other measures of interest may be, e.g., innovation, profits, and interna- tional trade effects that could not be tackled within the analysis conducted here. All in all, future empirical research in many directions is needed to complement these first ex-post insights into the effects of regulation according to the EU ETS.