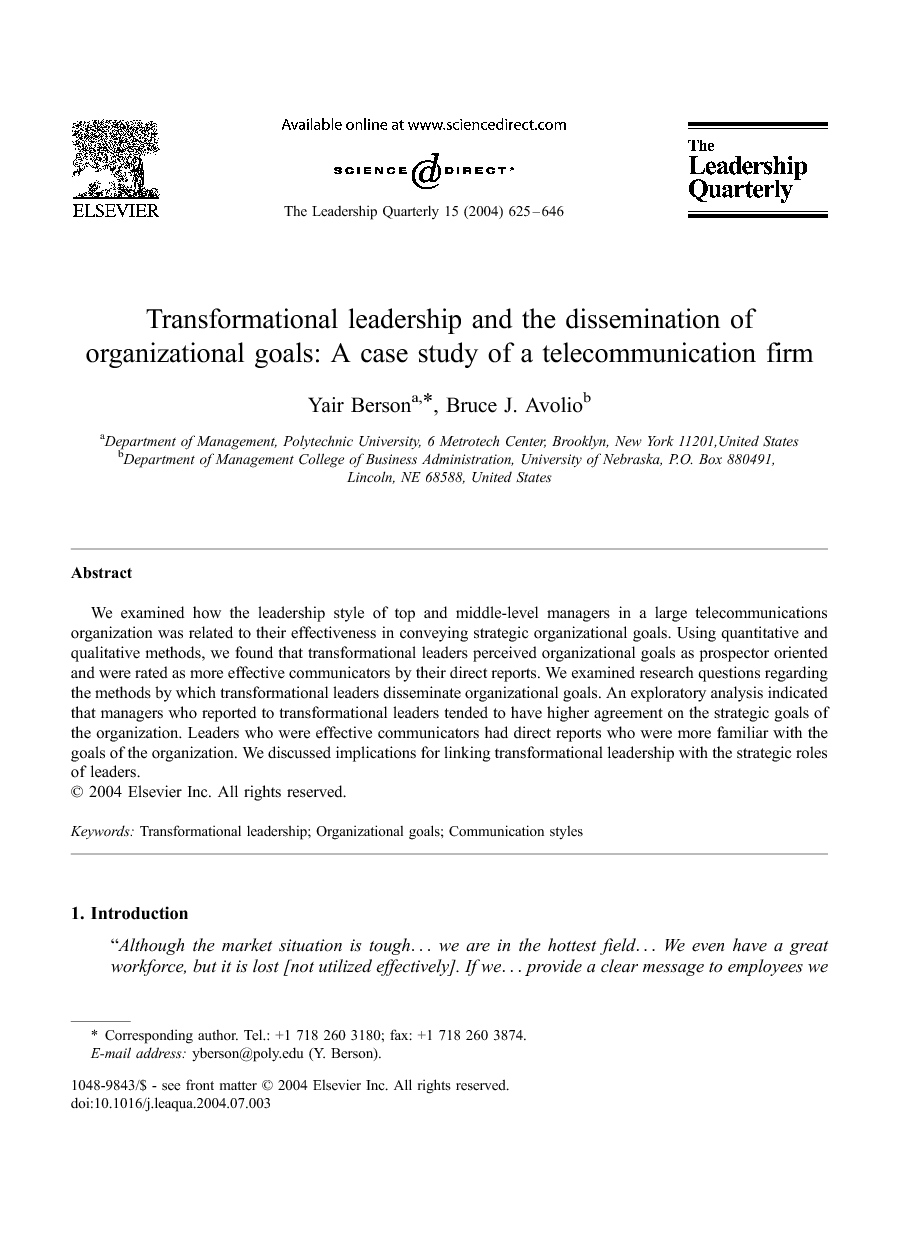 Although the market situation is tough… we are in the hottest field… We even have a great workforce, but it is lost [not utilized effectively]. If we… provide a clear message to employees we can be on the right track. However, managers can not provide direction to their employees, when they get unclear messages from the top . VP of Activity 1, interviewed for this study A core responsibility for organizational leaders is to direct followers towards achieving organizational purposes by articulating the organization's mission, vision, strategy, and goals (Zaccaro & Klimoski, 2001). Leaders at all levels are responsible for the dissemination of strategic organizational goals, as well as for convincing their constituents to effectively implement those goals. Cannella and Monroe (1997) indicated that transformational leaders form relationships with followers that may make it easier for them to disseminate and implement strategic goals. In this study, we explored how transformational and transactional leadership styles, communication style, and goal articulation were related to the dissemination of strategic goals across several organizational levels in a large complex telecommunications company. The effectiveness of strategic goal implementation depends on how well leaders in an organization perceive and clarify the goals, translate them into more specific goals tied to respective units, and then encourage an open learning environment to facilitate the pursuit and successful completion of the goals (Gillen, 2000 and Goodman et al., 1994). Previous authors (e.g., Avolio, 1999) have argued that transformational leaders articulate a strategic vision that helps guide followers to focus on and learn what is essential to implementing the vision and mission at their level, as well as at subsequent levels within the organization. They encourage followers to question assumptions, methods, and the goals to discover better ways to understand and translate them into specific actions and deliverables. By creating an open learning environment, they help foster a climate that promotes a deeper understanding of the goals, mission, and vision, which is likely to foster greater alignment, identification, and strategic focus throughout an organization (Gillen, 2000 and Boal & Hooijberg, 2001). Although previous authors have described the link between transformational leadership and the effective articulation of strategic goals, no prior research has tested this link. Consequently, we set out to explore the relationship between transformational leadership and strategic goal dissemination in a complex business undergoing change. We began by examining the relationships between direct reports' ratings of leadership style and the leader's perceptions of organizational goals. We then examined how transformational leadership relates to levels of agreement among members within their units and at subsequent levels regarding what constitutes the organization's strategic goals and objectives. Finally, we examined the extent to which communications styles and transformational leadership contributed to the detail and richness of members' perceptions of organizational goals. Fig. 1 includes a model summarizing the hypothesized links among transformational leadership, communication style, and the leaders' and their direct reports' articulation of organizational goals. Our methods and analyses involved using a combination of quantitative and qualitative methods (Jick, 1979 and Yin, 1994). Using these multiple methods, we examined relationships between quantitative variables, and between qualitative and quantitative variables. Given the exploratory nature of our study, we used research questions rather than formal hypotheses to test the proposed links in Fig. 1.