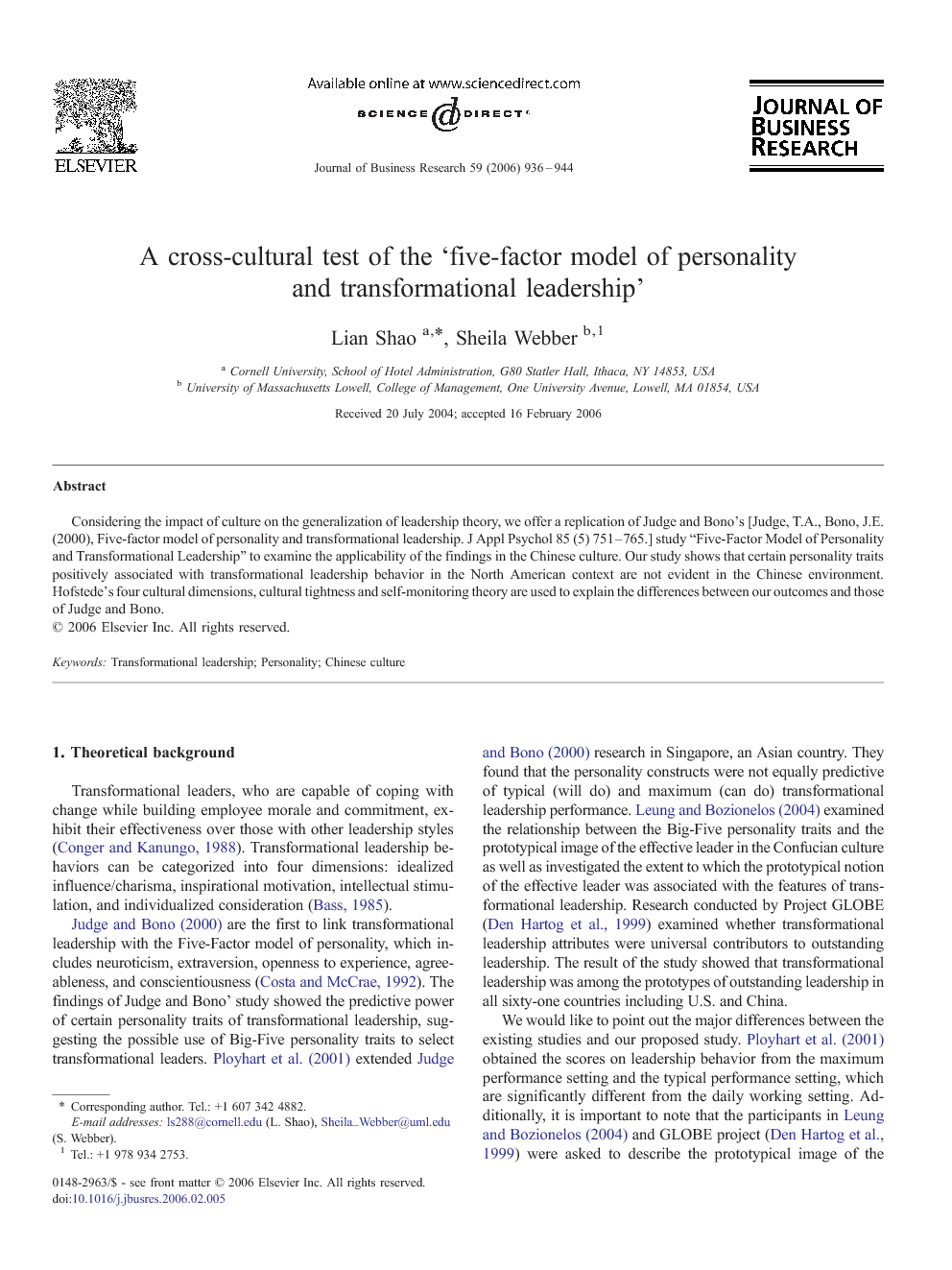 Considering the impact of culture on the generalization of leadership theory, we offer a replication of Judge and Bono's [Judge, T.A., Bono, J.E. (2000), Five-factor model of personality and transformational leadership. J Appl Psychol 85 (5) 751–765.] study “Five-Factor Model of Personality and Transformational Leadership” to examine the applicability of the findings in the Chinese culture. Our study shows that certain personality traits positively associated with transformational leadership behavior in the North American context are not evident in the Chinese environment. Hofstede's four cultural dimensions, cultural tightness and self-monitoring theory are used to explain the differences between our outcomes and those of Judge and Bono.

Many of the results in our study differed from what had been found in Judge and Bono's (2000) study: either lack significant relationships or reverse the correlations between the Big-Five personality traits and transformational leadership. Therefore, in order to explain this outcome, we might regard the Chinese culture as a negative moderator. The Chinese culture, characterized as high power distance, high uncertainty avoidance and collectivism, fundamentally reinforces the hierarchical and conformist attributes of the top–down command structure. This structure emphasizes a centralized authority and leadership, stability and predictability, which create barriers for the emergence of transformational leaders, who tend to challenge the status quo and raise performance expectations. However, we asserted at the beginning that transformational leaders are required to lead the subordinates to survive the challenges that China has been experiencing during the period of economic transition. These two lines of reasoning seem be contradicting; yet this is what is happening in China at this specific period of time. We attempted to explain this conflict from two aspects. First, we observed that the high-level leaders in SOE were appointed by the state. Thus, it is more proper to think the SOE leaders as government agents than as professional entrepreneurs. Therefore, the Chinese leaders are the recipients rather than the initiator or facilitator of the SOE reform. However, under the reformed system, the leaders are no longer just the communicator and implementer of the policies from the central government; they need to assume managerial leadership to maintain and grow their enterprises. It takes time for the leaders to assume the critical role of a successful change facilitator or transformational leader. Secondly, even though some leaders are able to assume the responsibility as effective leaders, deviation from the current norms of proper behavior prescribed to the leaders may still be largely regarded adverse to leadership efficiency. In order to fit in the cultural-prescribed social rules, Chinese leaders who actually possess the personality that will make positive contribution to the transformational leadership behaviors will be restricted to exhibit the corresponding behaviors. This line of explanation can be summarized as cultural tightness and is consistent with the idea raised by Church (2000), who argued that the behavior of persons in collectivistic cultures, compared to that in individualist cultures, will be less predictable from assessments of internal dispositions such as personality traits or attitudes yet more predictable from social roles and norms. Our study showed that both Chinese leaders and U.S. leaders rated themselves low in neuroticism and high in extraversion, openness to experience, conscientiousness, and agreeableness. However, the same level of personality trait did not predict the same level of transformational leadership behavior. This lack of linkage between personality and behavior can also be explained by Snyder's (1974) self-monitoring theory, which postulated the differences in general traitedness versus situational determination of behavior. High self-monitoring people are concerned about the situational and interpersonal appropriateness of their behavior. Thus they would be relatively “trait-free” and show considerable cross-situational inconsistency in their behavior (Snyder, 1974). In contrast, low self-monitoring individuals are less aware of situational cues and their behaviors are more guided by their personality traits and show greater behavioral consistency across situations. In conclusion, the five-factor model of personality seems not as useful a predictor of transformational leadership behaviors in China as in the US samples (Judge and Bono, 2000). Again, we want to point out that the culture of a nation where a company is operating will significantly affect many business variables (Bjerke, 1999). It will be helpful to pay attention to the cultural influence when dealing with international businesses.