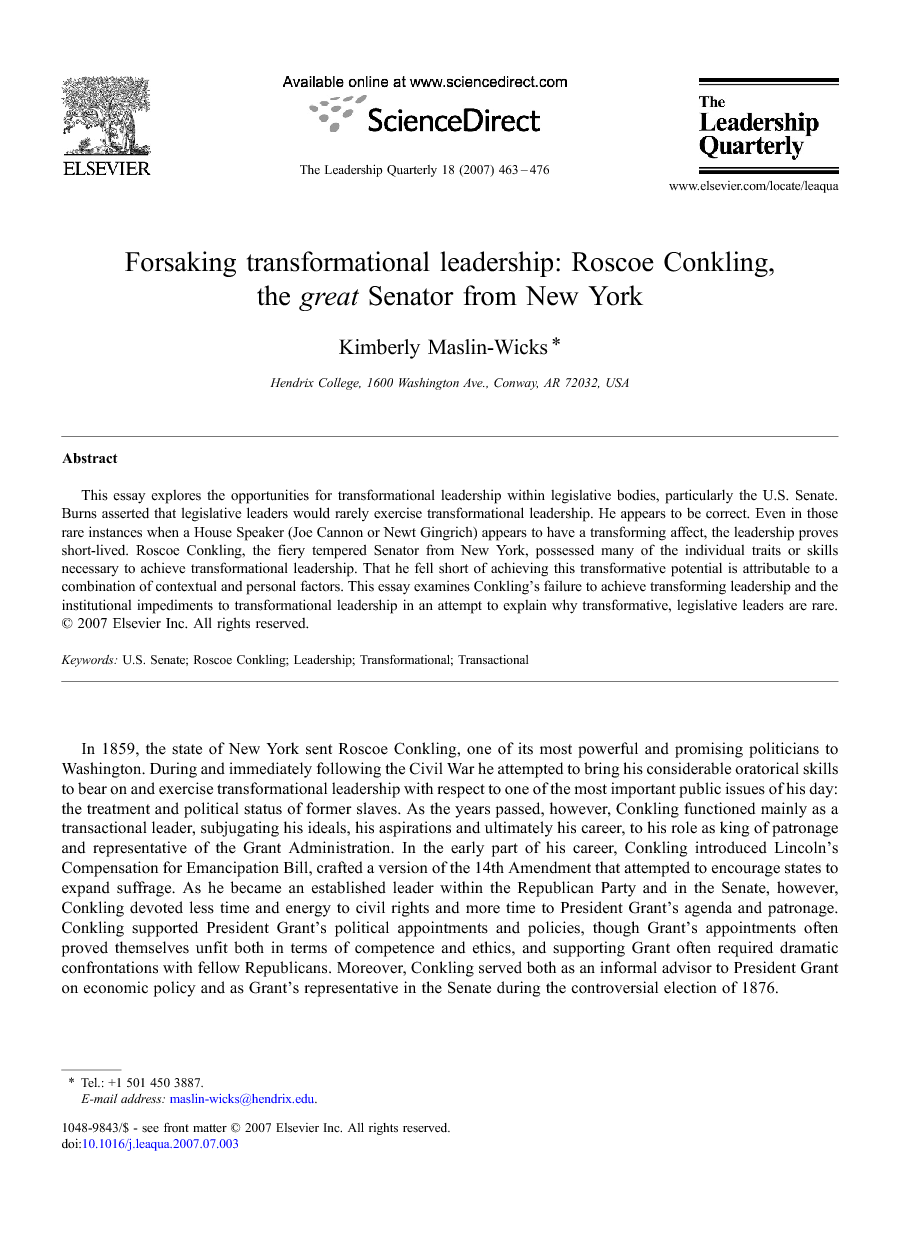 Though there seems to be some agreement amongst leadership scholars that both context and individual skills matter in terms of leadership, there is little agreement as to how we should conceptualize context or which skills matter. At least with respect to decision-making in a legislative context, there is some agreement amongst political scientists as to how we should conceptualize context. One critical issue is how many standards of judgment are regularly invoked during a legislative session. The other critical issue is whether or not the individual has the rhetorical skills to manipulate those standards in order to achieve some desired outcome. Conkling had the oratorical skills to connect with an audience, which were particularly important during the 19th century Senate. Moreover, he cared a great deal about slavery, a sufficiently compelling moral issue. He attempted to create a sustained movement around the civil rights issue, but he was unsuccessful for two reasons. First, in terms of the context, as legislative scholars have demonstrated when two or more standards of judgment or dimensions are present, policy outcomes can be dislodged from the expected median voter position (Plott, 1967, Schofield, 1978, McKelvey, 1976 and McKelvey, 1979), offering opportunities to manipulate legislative results. Thus, multiple dimensions present leadership opportunities in legislative bodies. Multiple dimensions present would-be-leaders with the opportunity to use their oratorical skills to affect legislative outcomes (Riker, 1980). Even when a second dimension was present during Conkling's tenure, its content varied considerably, making that dimension an unpredictable basis for enduring leadership. Second, transformative leadership requires not only the ability to connect with and motivate an audience (intellectual stimulation, inspirational motivation, idealized influence), but also the ability to connect with and inspire individuals (individualized consideration). While Roscoe Conkling had the verbal skills to connect with an audience, he did not have the confidence or inter-personal skills to connect with individuals, one on one. Finally, since transactional leadership does not unite leaders and followers with anything more enduring than immediate gratification, it is likely to be a short-lived phenomenon. As soon as a leader is unable to deliver the expected rewards, he will be cast aside. Roscoe Conkling experienced the fickle aspect of transactional leadership in 1881. After Conkling lost the battle over the Custom House Collector and it was clear his influence was declining nationally, virtually no one was willing to support his re-election effort in the state legislature. Since Conkling and his followers were not united by anything stronger than political expediency, he was easily cast aside. It is worth noting that upon his death in 1888, the most genuine expression of sympathy came, not from Republicans, but from the African-American community. The obituary from the Cleveland Gazette read, “a true race friend has died”. It was with the African-American community that Conkling established his most meaningful ties, and it was with the African-American community that Conkling missed the opportunity to realize transformative, uplifting, humanizing leadership.