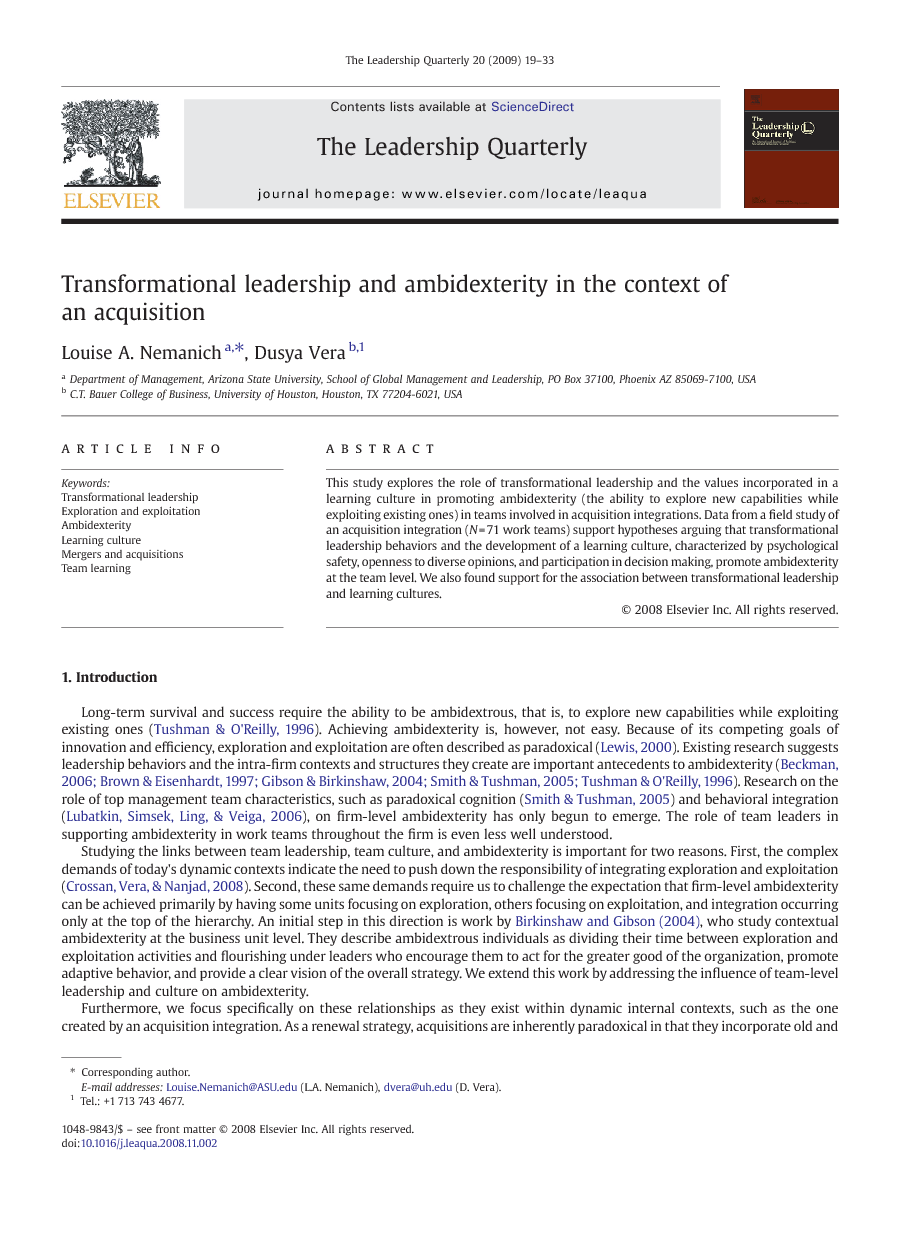 Long-term survival and success require the ability to be ambidextrous, that is, to explore new capabilities while exploiting existing ones (Tushman & O'Reilly, 1996). Achieving ambidexterity is, however, not easy. Because of its competing goals of innovation and efficiency, exploration and exploitation are often described as paradoxical (Lewis, 2000). Existing research suggests leadership behaviors and the intra-firm contexts and structures they create are important antecedents to ambidexterity (Beckman, 2006, Brown and Eisenhardt, 1997, Gibson and Birkinshaw, 2004, Smith and Tushman, 2005 and Tushman and O'Reilly, 1996). Research on the role of top management team characteristics, such as paradoxical cognition (Smith & Tushman, 2005) and behavioral integration (Lubatkin, Simsek, Ling, & Veiga, 2006), on firm-level ambidexterity has only begun to emerge. The role of team leaders in supporting ambidexterity in work teams throughout the firm is even less well understood. Studying the links between team leadership, team culture, and ambidexterity is important for two reasons. First, the complex demands of today's dynamic contexts indicate the need to push down the responsibility of integrating exploration and exploitation (Crossan, Vera, & Nanjad, 2008). Second, these same demands require us to challenge the expectation that firm-level ambidexterity can be achieved primarily by having some units focusing on exploration, others focusing on exploitation, and integration occurring only at the top of the hierarchy. An initial step in this direction is work by Birkinshaw and Gibson (2004), who study contextual ambidexterity at the business unit level. They describe ambidextrous individuals as dividing their time between exploration and exploitation activities and flourishing under leaders who encourage them to act for the greater good of the organization, promote adaptive behavior, and provide a clear vision of the overall strategy. We extend this work by addressing the influence of team-level leadership and culture on ambidexterity. Furthermore, we focus specifically on these relationships as they exist within dynamic internal contexts, such as the one created by an acquisition integration. As a renewal strategy, acquisitions are inherently paradoxical in that they incorporate old and new, striving to achieve consistency and cost reductions while creating a larger platform for growth and innovation (Crossan et al., 1999, Hitt et al., 2001, March, 1991 and McNamara and Baden-Fuller, 1999). Unfortunately, while the need for ambidexterity is high, acquisitions create a context replete with barriers to learning, such as ambiguity, disrupted knowledge networks, fear, risk aversion, and cultural differences (Bijlsma-Frankema, 2001 and Ernst and Vitt, 2000). The type of leadership considered in this study is a set of behaviors and attributions known as transformational leadership (Bass, 1985 and Bass, 1998). Transformational leadership is charismatic, inspirational, intellectually stimulating, and individually considerate (Bass, 1985 and Bass, 1998). Transformational leadership behaviors by senior executives are more likely to be effective in dynamic environments (Waldman, Ramirez, House, & Puranam, 2001) and to promote both explorative and exploitative learning in which the status quo is challenged (Vera & Crossan, 2004). Prior research provides only scattered evidence of the links between transformational leadership, the culture associated with these leaders, and ambidexterity in dynamic contexts, especially at lower organizational levels (Berson, Nemanich, Waldman, Galvin, & Keller, 2006). For example, research in R&D organizations indicates a positive effect of transformational leadership on exploration (e.g., Keller, 1992, Keller, 2006, Shin and Zhou, 2003, Waldman and Atwater, 1992 and Waldman and Bass, 1991), although some studies using student groups offer conflicting results (e.g., Jaussi and Dionne, 2003 and Kahai et al., 2003). On the other hand, we know very little about the link between transformational leadership and exploitation and about how transformational behaviors simultaneously enable the two learning processes. A generally accepted view argues that the characteristics of a firm's or a team's culture are taught by its leadership and eventually adopted by its followers. However, more than a decade has passed since Schein's (1997) description of what an internal culture that favors learning would look like, and, surprisingly, this concept remains largely empirically untested. Addressing these gaps in our knowledge, the research question that guides our study is: What are the effects of transformational leadership and learning cultures on ambidexterity in acquisition integrations? We contribute to the leadership and organizational learning literatures by taking a comprehensive look at how team-level transformational leadership and learning culture support ambidexterity during an acquisition integration. In doing this, we challenge conventional wisdom associating transformational leadership only with exploration by showing that, in the changing context of an acquisition, transformational leadership behaviors and the learning cultures associated with these leaders are linked with ambidexterity, that is, exploration and exploitation. We begin with a brief review of the concept of ambidexterity. Next, our conceptual model is presented. We then discuss the methods used to test our model in a field study of an acquisition integration. Finally, the results and implications of the study are described.