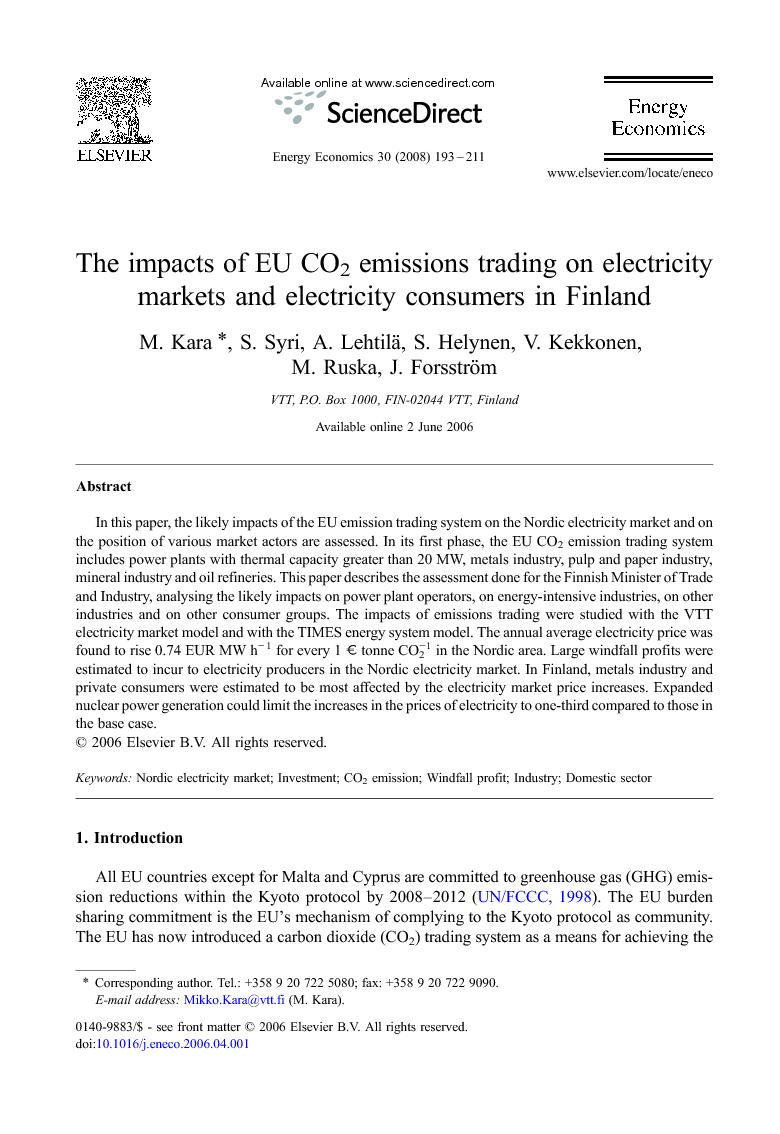 In this paper, the likely impacts of the EU emission trading system on the Nordic electricity market and on the position of various market actors are assessed. In its first phase, the EU CO2 emission trading system includes power plants with thermal capacity greater than 20 MW, metals industry, pulp and paper industry, mineral industry and oil refineries. This paper describes the assessment done for the Finnish Minister of Trade and Industry, analysing the likely impacts on power plant operators, on energy-intensive industries, on other industries and on other consumer groups. The impacts of emissions trading were studied with the VTT electricity market model and with the TIMES energy system model. The annual average electricity price was found to rise 0.74 EUR MW h− 1 for every 1 € tonne CO2−1 in the Nordic area. Large windfall profits were estimated to incur to electricity producers in the Nordic electricity market. In Finland, metals industry and private consumers were estimated to be most affected by the electricity market price increases. Expanded nuclear power generation could limit the increases in the prices of electricity to one-third compared to those in the base case.

All EU countries except for Malta and Cyprus are committed to greenhouse gas (GHG) emission reductions within the Kyoto protocol by 2008–2012 (UN/FCCC, 1998). The EU burden sharing commitment is the EU's mechanism of complying to the Kyoto protocol as community. The EU has now introduced a carbon dioxide (CO2) trading system as a means for achieving the EU burden sharing targets, commenced in the beginning of 2005 (Official Journal of the European Union, 2003). With the emission trading system, a market-based cost is associated to carbon dioxide emissions, and emission allowances can be sold and purchased within the EU area. In the first phase of the system, 2005–2007, power plants with thermal capacity greater than 20 MW, as well as metals industry, pulp and paper industry, mineral industry and oil refineries are included. National authorities in each country have allocated initial emission allowances to plants covered by the system in their National Allocation Plans, which are to be approved by the European Commission. The EU emission trading is expected to be a major change in the operating environment, especially for energy production and for the energy-intensive industry. In Finland, an exceptionally large part of all activities producing CO2 emissions are included in the system (62%, whereas the EU average is 55%). This is mainly due to the energy-intensive structure of the Finnish industry and the cold climate. The efficiency of the fuels used is among the highest in OECD (Kara et al., 2004). Combined heat and power (CHP) production is commonly used both in energy production and within industry. About one-third of electricity is generated in CHP plants in Finland. The already high efficiency of fuel use makes additional improvements more difficult. In addition, the electricity intensity of the Finnish economy is remarkably higher than in OECD and EU countries on average (Fig. 1). Due to these reasons, the EU emissions trading will be exceptionally significant for Finland.Various energy-intensive industries are in very different relative positions with regard to emissions trading, depending on their structures of electricity supply and on their access to alternative energy sources (e.g. bioenergy). Especially metals industry has expressed serious concerns related to their future competitiveness with the expected rise of electricity prices. The energy-intensive export-oriented industrial sector is very important for the national economy of Finland, and a stable and competitive electricity price is of crucial importance for the energy-intensive industry. The Nordic countries Finland, Norway, Sweden and Denmark form a common electricity market. More than 70% of all electricity production is carbon-free, consisting of mainly hydropower and nuclear power. However, most of the time the marginal production mode is coal condensing power, which will probably experience a notable cost increase with the CO2 emission trading system. Due to the operating principle of the electricity market, this cost increase will affect all electricity sold through the Nordic electricity market. In addition, the spot market price is used as reference for much of electricity sold outside the electricity market. Therefore, it is expected that the EU emissions trading system will affect electricity prices considerably in the Nordic market, with likely additional impacts on heat and fuel prices. Due to these reasons, the Finnish Minister of Trade and Industry commissioned a study in early 2004 to assess the likely impacts of the EU emissions trading system on electricity prices in the Nordic market and on the competitive positions of various market actors (Kara, 2004). The assignment included the identification of possible counter-measures against the foreseeable negative side-impacts, such as the reduced competitiveness of industry and increasing costs for all electricity consumer groups, the possible negative impacts on competition at the electricity market and national energy supply security issues. This paper describes the assessment carried out and the measures recommended at national level.

The EU emissions trading of carbon dioxide will bring considerable competitive advantage to carbon-free energy production forms. However, in the short run, the emissions trading system may not speed up investment decisions in low- or zero-carbon energy sources in the Nordic electricity market. The present emissions trading system with specifications extending only a few years ahead has considerably increased the uncertainties related to the investment decisions. Instead, the emissions trading system will probably induce significant transfers of capital from old EU countries to new EU countries and outside the EU, as both electricity imports and purchases of emission allowances to the old EU countries are likely to be considerable. The average impact of emission trading on electricity prices in the Nordic market was studied with the VTT electricity market model up to the year 2010. According to the model calculations, the annual average electricity price will rise by 0.74 EUR MW h − 1 for every 1 € tonne CO 2 − 1 in the Nordic area. In this work, it was estimated that the probable price level of CO 2 allowances will be in the order of 10 – 20 € tonne CO 2 − 1 during the 2008 – 2012 emissions trading period. The positions of various energy-intensive industry branches with regard to emission trading are fundamentally different in Finland. Pulp and paper industry owns most of their electricity and heat supply. In addition, it has an easy access to additional biomass reserves. Pulp and paper industry also occasionally sell electricity to the market, especially during price peaks at the market. Therefore, pulp and paper industry in Finland may actually be a net beneficiary of the EU emission trading. Metals industry, in turn, is likely to experience the forthcoming price increases in full, with significant impacts on their international competitiveness. Small-scale consumers are also likely to experience the electricity price rises in full. For private households with electrically heated houses the expected increases in annual electricity costs are in the order of 150 € at the price level of 10 € tonne CO 2 − 1 . In further work, the effects of emission trading on the energy sector, investments, industries and consumer behavior should be monitored. Small-scale consumer groups are most affected by the so-called windfall mechanism in the emissions trading system. In Finnish circumstances, the electricity price increase caused by emissions trading to private households, property owners and agriculture would translate into an annual windfall profit of about 150 million € with a carbon price level of 10 € tonne CO 2 − 1 . Similarly, the so-called windfall profits to electricity producers paid by the services sector would amount to 100 million € annuallyKey measures in limiting the price rises of electricity and in ensuring the achievement of the original purposes of the emissions trading system are investments in new low-emission generation capacity, increased competition at the electricity market and continuous, sufficient investments in technology development. In addition, the national energy taxation and support systems should be updated to correspond more closely to the specific carbon emissions. In the near future, development of real-time metering systems enabling flexible tariffs for small- scale customers would be important. Also possible developments of electricity market legislation, e.g. enforcement of different electricity products to small-scale customers, should be assessed. In Finland, the single most cost-effective technology to limit the electricity price rises and to reduce greenhouse gas emissions would be nuclear power. TIMES model simulations indicated that through expanded nuclear power generation, the increases in the prices of electricity caused by the emissions trading system would be about one-third compared to those in the base case. Consequently, the growth in energy expenditures would be in all consumer groups substantially smaller in the increased nuclear power case. Other important low-emission technologies in Finnish circumstances include advanced CHP technologies, recovery boiler technologies and advanced wind power technologies in arctic and sub-arctic environments. There are also signifi- cant other benefits in maintaining a multifaceted energy supply and technology development, such as the versatility and domestic share of the energy supply and export opportunities of advanced technologies.