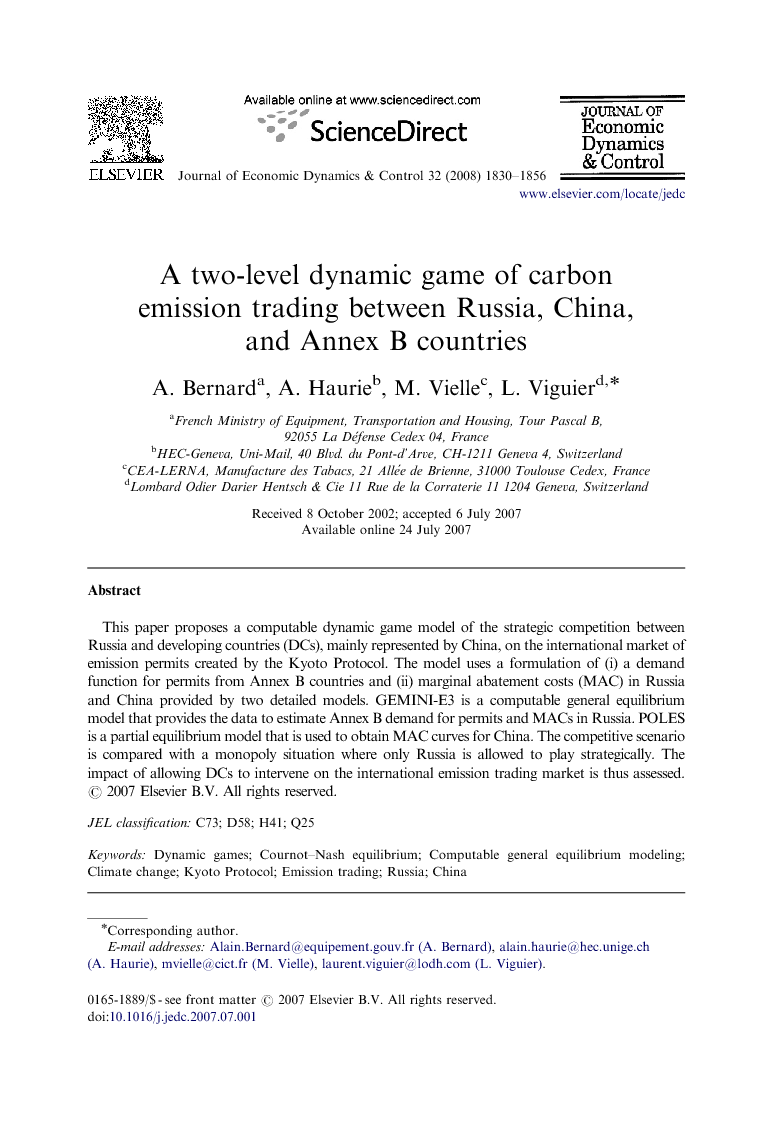 This paper proposes a computable dynamic game model of the strategic competition between Russia and developing countries (DCs), mainly represented by China, on the international market of emission permits created by the Kyoto Protocol. The model uses a formulation of (i) a demand function for permits from Annex B countries and (ii) marginal abatement costs (MAC) in Russia and China provided by two detailed models. GEMINI-E3 is a computable general equilibrium model that provides the data to estimate Annex B demand for permits and MACs in Russia. POLES is a partial equilibrium model that is used to obtain MAC curves for China. The competitive scenario is compared with a monopoly situation where only Russia is allowed to play strategically. The impact of allowing DCs to intervene on the international emission trading market is thus assessed.

The aim of this paper is to propose a computable economic model of the strategic interactions between Russia and developing countries (DCs), in particular China, in international markets for carbon emission permits created by the Kyoto Protocol (UNFCCC, 1997). This model provides an assessment of the impact of this competition on the pricing of emission permits. We assume that some DCs will participate in future climate negotiations of the Kyoto Protocol and be able to sell emission permits on the international market. We also assume that the rest of the world will behave as a passive set of players integrating the emission permits in their production decisions according to the rules of a time-stepped1 competitive economic equilibrium. A particular feature of the Kyoto Protocol is the large quantity of emission rights granted to Russia, since they were based on historic levels. Due to the collapse of the traditional industrial sectors in Russia, these emission rights – also called ‘hot air’ – are now available at no cost. The agreement allows Russia to bank these emission rights and optimize over time their sale on the international market. This feature gives a dynamic structure to this oligopolistic competition for selling emission permits to other countries. We formalize it as a dynamic multistage game for which we compute an open-loop Nash equilibrium solution ( Başar and Olsderh, 1989, de Zeeuw and van der Ploeg, 1991 and Dockner et al., 2000). Differential game models have already been used successfully in environmental economics as e.g. in the fishery games 2 and more recently to analyze the acid rain game ( Maler and de Zeeuw, 1998). In the Kyoto Protocol context Loschel and Zhang (2002) have analyzed the interactions between Eastern Europe and Russia as a static Cournot model of duopoly, where the two regions simultaneously set their quantity supplied to the permits market by 2010. The model we propose also includes transaction costs. The transaction cost approach to the theory of the firm was first introduced by Coase (1937) in his seminal paper ‘The Nature of the Firm’. Transaction costs refer to the cost of providing for some good or service through the market rather than from within the firm.3 Several authors have commented on the potential importance of transaction costs in tradable permits markets (Hahn and Hester, 1989 and Stavins, 1995).4Stavins (1995) identifies three potential sources of transaction costs in tradable permit markets: ‘(1) search and information; (2) bargaining and decision; and (3) monitoring and enforcement, all these categories can be interpreted as representing cost due to lack of information’. In its global formulation our model is similar to the one proposed by Nagurney and Kanwalroop (2000) except that it does not deal with a spatially distributed pollutant and it has a dynamical two-level structure, where two players compete actively at the upper level, whereas a competitive fringe reacts at the lower level. The dynamic game model involves only one state variable for each player, namely the stocks of emission permits banked by Russia and the dominant DC, China, respectively. The time horizon on which Russia and DCs compete to sell emission rights to other countries is 2010–2030. Each player has three control variables at its disposal that are (i) the rate of permits banking, (ii) the amount of permits supplied, and (iii) the emissions abatement levels, respectively. The equilibrium decisions by the two players are driven by the functions describing the demand for permits from other countries and by their respective marginal abatement cost (MAC) functions. These functions will be themselves obtained from two other models, GEMINI-E3 and POLES, respectively. GEMINI-E3 is a multi-region and multi-sector computable general equilibrium (CGE) model of the world economy (Bernard and Vielle, 2003) that will provide an estimate of the demand function for emission permits at each period of time. POLES is a partial equilibrium model of the world energy system (Criqui, 1996) that will be used to estimate MAC curves for the two players. With these specifications we compute the Cournot–Nash equilibrium for the dynamic game and compare the solution with the monopoly equilibrium – where only Russia is strategically supplying the market – to assess the benefits obtained from allowing DCs to compete on the emission market. In our scenarios, the emission permits game takes place between Russia and China, knowing that China is likely to be the main exporter of emission permits in a full global trading regime (Ellerman et al., 1998, Criqui et al., 1999 and Zhang, 2000). The paper is organized as follows. In Section 2 we recall the fundamental economic elements of the Kyoto Protocol. In Section 3, the dynamic game is formulated and the conditions characterizing a Nash equilibrium are given in the form of a nonlinear complementarity problem (Ferris and Pang, 1997). In Section 4 we discuss the calibration of the model based on simulations obtained from the GEMINI-E3 and POLES models. Section 5 presents the simulation results. A duopoly scenario is compared with a case where Russia acts as a monopoly in the emission market. Due to the large uncertainty around parameter values of the model, we proceed to a sensitivity analysis of the results in Section 6 to (1) the participation of China in the international effort to curb GHG emissions and (2) transaction costs associated with CDM projects. Finally, Section 7 concludes the paper.

In this paper, we have presented a computable two-level dynamic game of carbon emission trading between Russia, China, and Annex B countries. This model was calibrated using GEMINI-E3, which is a multi-country, multi-sector, dynamical- recursive CGE model developed to analyze climate change policies, and POLES, which computes a partial equilibrium of the world energy system in 30 regions. In our simulations, it appears that the competition between Russia and China on the international market for carbon emissions should lower significantly the permit prices compared to the case where Russia acts as a monopoly. The introduction of transaction costs in China and the stabilization of China emissions by 2030 do not modify significantly the Russia’s revenues from emission trading. These simulation results tend to show that the participation of DCs in an IET scheme with ‘reasonable’ abatement targets for them could be beneficial to both Annex B countries and DCs ( Viguier, 2004 ). Nevertheless, a high level of uncertainty remains in several parameters of the model; in particular the amount of ‘hot air’, MAC curves, emission targets in the post-Kyoto regime, etc. A stochastic equilibrium model in the line of the oneproposed by Haurie and Moresino (2002) has been studied by Haurie and Viguier (2003) , when the random shocks are independent from the players controls. The extension to a stochastic framework where one endogenizes the decision of a DC to enter the permits market is still to be developed.