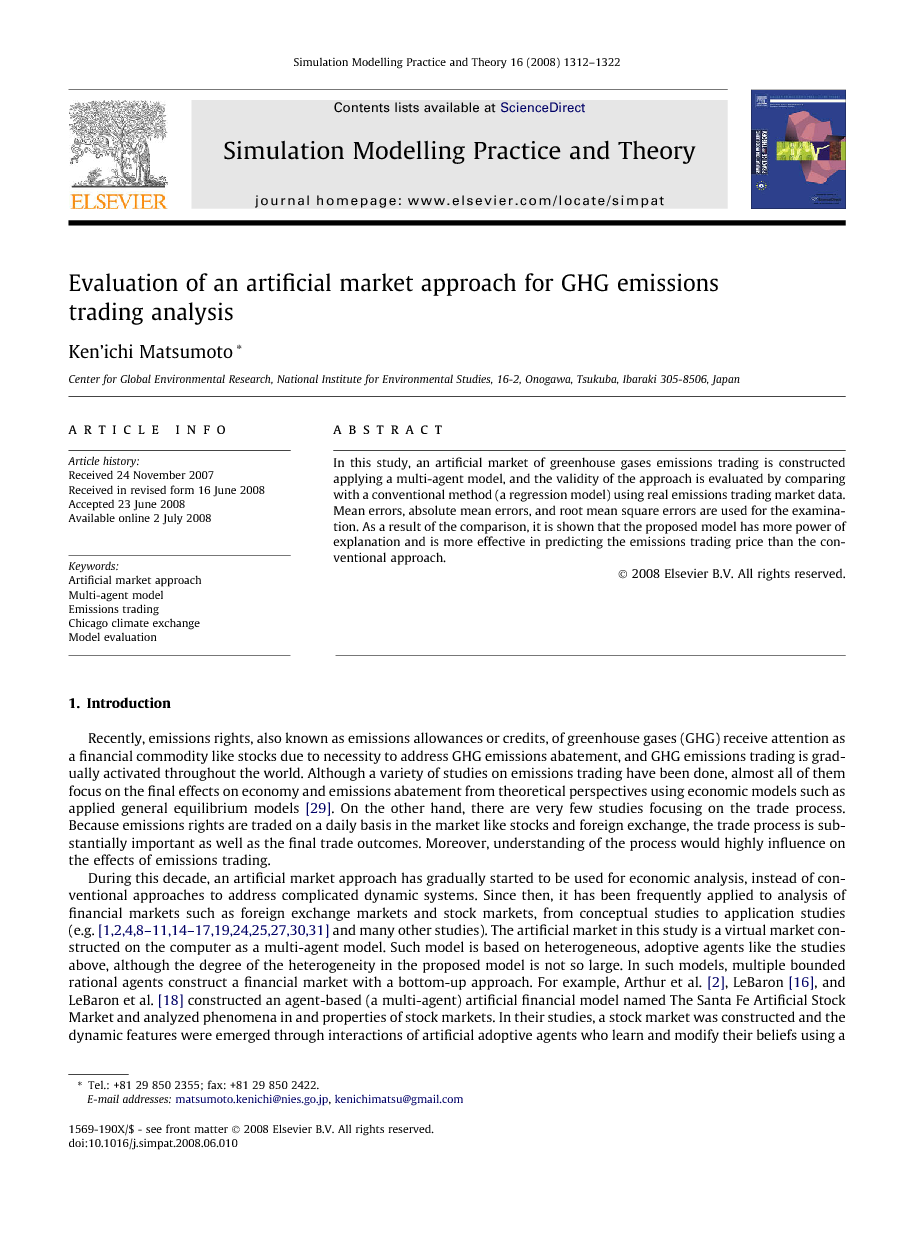 In this study, an artificial market of greenhouse gases emissions trading is constructed applying a multi-agent model, and the validity of the approach is evaluated by comparing with a conventional method (a regression model) using real emissions trading market data. Mean errors, absolute mean errors, and root mean square errors are used for the examination. As a result of the comparison, it is shown that the proposed model has more power of explanation and is more effective in predicting the emissions trading price than the conventional approach.

Recently, emissions rights, also known as emissions allowances or credits, of greenhouse gases (GHG) receive attention as a financial commodity like stocks due to necessity to address GHG emissions abatement, and GHG emissions trading is gradually activated throughout the world. Although a variety of studies on emissions trading have been done, almost all of them focus on the final effects on economy and emissions abatement from theoretical perspectives using economic models such as applied general equilibrium models [29]. On the other hand, there are very few studies focusing on the trade process. Because emissions rights are traded on a daily basis in the market like stocks and foreign exchange, the trade process is substantially important as well as the final trade outcomes. Moreover, understanding of the process would highly influence on the effects of emissions trading. During this decade, an artificial market approach has gradually started to be used for economic analysis, instead of conventional approaches to address complicated dynamic systems. Since then, it has been frequently applied to analysis of financial markets such as foreign exchange markets and stock markets, from conceptual studies to application studies (e.g. [1], [2], [4], [8], [9], [10], [11], [14], [15], [16], [17], [19], [24], [25], [27], [30] and [31] and many other studies). The artificial market in this study is a virtual market constructed on the computer as a multi-agent model. Such model is based on heterogeneous, adoptive agents like the studies above, although the degree of the heterogeneity in the proposed model is not so large. In such models, multiple bounded rational agents construct a financial market with a bottom-up approach. For example, Arthur et al. [2], LeBaron [16], and LeBaron et al. [18] constructed an agent-based (a multi-agent) artificial financial model named The Santa Fe Artificial Stock Market and analyzed phenomena in and properties of stock markets. In their studies, a stock market was constructed and the dynamic features were emerged through interactions of artificial adoptive agents who learn and modify their beliefs using a genetic algorithm (GA). By applying an artificial market approach where trade is based on micro agents behaving as traders in the computational market, it is possible to simulate various phenomena occurred in actual financial markets which are difficult or impossible to explain by conventional (mainstream) economic theories (such as the Walrasian equilibrium) [13] and [28]. It can also be used to analyze traders’ behavior which is difficult to understand only from the actual trade. Because it is a multi-agent model in a competitive situation, each agent behaves to accomplish its purpose independently through interactions with other agents rather than to accomplish a single, shared purpose of all the agents. One of the most significant characteristics of this approach is that behavioral aspects of economic agents which have been considered important for their decision making in the actual markets can be incorporated into the model. On the contrary, the theory of rational expectations [26], which is the mainstream hypothesis used in economic theories so far, imposes strong assumptions that homogeneous agents act under the perfect foresight and do not need to learn or modify their behavior at all. Thus, such features are not taken into account there. However, in real situations, heterogeneous agents exist, and they are bounded rational, have imperfect information, and change the ways of decision making continuously by adapting to the environment. Thus, it is required to consider the behavioral views. Although the artificial market approach has such a big advantage, there are some criticisms that the theoretical rationale is poor [13] and [28], hence the approach has not been so popular in economics yet. However, it is also true that some studies indicate the effectiveness as mentioned above. The purpose of this study is to evaluate effectiveness of an artificial market approach (or a multi-agent model for market simulations) for GHG emissions trading analysis. This study is based on the concept provided by Izumi and Okatsu [9] and Izumi and Ueda [10] and [11]. They analyzed dynamics of a foreign exchange market applying an artificial market approach to examine the effectiveness of the approach in analyzing economic phenomena. They proposed a model with artificial adoptive agents learning and modifying their belief systems using GA. In their model, not only trend data but also fundamentals data were used for the agents’ decision making. After comparing with existing approaches (a linear regression model and a random walk model) by mean absolute errors and root mean square errors, they concluded that their model could forecast and explain the actual exchange rate more accurately. The structure of the following sections is as follows: GHG emissions trading is explained briefly in the second section. In the third section, the general framework of the proposed model is explained. In the fourth section, the structure of the model is described. In the fifth section, the framework of the analysis is explained. In the sixth section, the evaluation methods and the results of this study are shown. Finally, the seventh section includes discussions and concluding remarks.