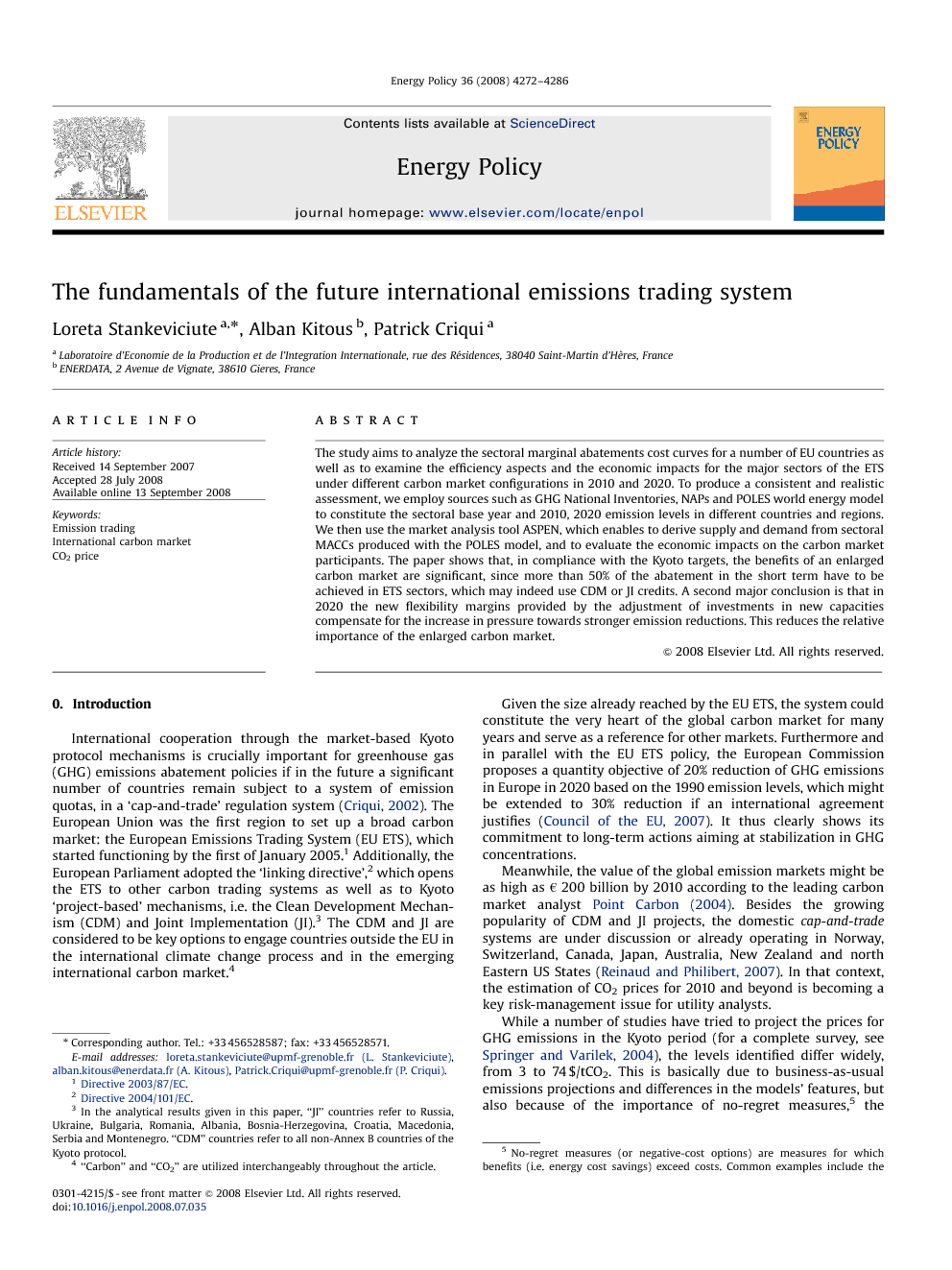 The study aims to analyze the sectoral marginal abatements cost curves for a number of EU countries as well as to examine the efficiency aspects and the economic impacts for the major sectors of the ETS under different carbon market configurations in 2010 and 2020. To produce a consistent and realistic assessment, we employ sources such as GHG National Inventories, NAPs and POLES world energy model to constitute the sectoral base year and 2010, 2020 emission levels in different countries and regions. We then use the market analysis tool ASPEN, which enables to derive supply and demand from sectoral MACCs produced with the POLES model, and to evaluate the economic impacts on the carbon market participants. The paper shows that, in compliance with the Kyoto targets, the benefits of an enlarged carbon market are significant, since more than 50% of the abatement in the short term have to be achieved in ETS sectors, which may indeed use CDM or JI credits. A second major conclusion is that in 2020 the new flexibility margins provided by the adjustment of investments in new capacities compensate for the increase in pressure towards stronger emission reductions. This reduces the relative importance of the enlarged carbon market.

International cooperation through the market-based Kyoto protocol mechanisms is crucially important for greenhouse gas (GHG) emissions abatement policies if in the future a significant number of countries remain subject to a system of emission quotas, in a ‘cap-and-trade’ regulation system (Criqui, 2002). The European Union was the first region to set up a broad carbon market: the European Emissions Trading System (EU ETS), which started functioning by the first of January 2005.1 Additionally, the European Parliament adopted the ‘linking directive’,2 which opens the ETS to other carbon trading systems as well as to Kyoto ‘project-based’ mechanisms, i.e. the Clean Development Mechanism (CDM) and Joint Implementation (JI).3 The CDM and JI are considered to be key options to engage countries outside the EU in the international climate change process and in the emerging international carbon market.4 Given the size already reached by the EU ETS, the system could constitute the very heart of the global carbon market for many years and serve as a reference for other markets. Furthermore and in parallel with the EU ETS policy, the European Commission proposes a quantity objective of 20% reduction of GHG emissions in Europe in 2020 based on the 1990 emission levels, which might be extended to 30% reduction if an international agreement justifies (Council of the EU, 2007). It thus clearly shows its commitment to long-term actions aiming at stabilization in GHG concentrations. Meanwhile, the value of the global emission markets might be as high as € 200 billion by 2010 according to the leading carbon market analyst Point Carbon (2004). Besides the growing popularity of CDM and JI projects, the domestic cap-and-trade systems are under discussion or already operating in Norway, Switzerland, Canada, Japan, Australia, New Zealand and north Eastern US States ( Reinaud and Philibert, 2007). In that context, the estimation of CO2 prices for 2010 and beyond is becoming a key risk-management issue for utility analysts. While a number of studies have tried to project the prices for GHG emissions in the Kyoto period (for a complete survey, see Springer and Varilek, 2004), the levels identified differ widely, from 3 to 74 $/tCO2. This is basically due to business-as-usual emissions projections and differences in the models’ features, but also because of the importance of no-regret measures,5 the availability of project-based credits and the sectors participating in the market. Additionally, the majority of studies search to determine the carbon prices needed to achieve the Kyoto targets in global economies of different countries, with the exceptions of Angers (2006) and Klepper and Peterson (2006) who differentiate between energy intensive or ETS and non-energy intensive or non-ETS sectors. As an example, in order to derive the ETS carbon price, Klepper and Peterson (2006) use emissions allowances based on the first National Allocation Plans under the ETS for their emission limits. It is, however, known today that the allocation endowments have been too generous in the first phase of ETS (e.g. Ellerman and Joskow, 2008), which, if taken into account, modifies the reduction shortfall under the ETS. The same remark applies to the study by Angers (2006), which also analyses the efficiency aspects of linking different cap-and-trade systems in 2020. Finally, none of the studies cited have attempted to look at the economic impacts on different sectors of the ETS nor do they perform an extensive analysis of the sectoral marginal abatement cost curves (MACCs). Our study, therefore, complements these researches by (i) providing an analysis of sectoral marginal abatements cost curves for a number of European countries and (ii) by addressing the efficiency aspects and the economic impacts for the major sectors of the EU ETS6 under different carbon market configurations. A static and competitive equilibrium environment is assumed, for a given set of sectoral targets by country or world region in 2010 and 2020. As a number of variables have a significant impact on the fundamentals of the demand and supply of carbon allowances, this type of exercise has to formulate a whole set of consistent hypotheses, including • the tightness of the sectoral objectives in the ETS system, which to a large extent refers to second NAPs under the ETS for 2010 and to the suggested reduction by the Commission of 21% of verified 2005 ETS emissions for 2020, but also the tightness of allocation in other carbon trading systems; • the availability and costs of credits originating from the CDM and JI projects. To explore the economic impacts of various organizations of global carbon markets and key variables mentioned above, we use the market analysis tool ASPEN, which enables to derive supply and demand from sectoral MACCs produced with the reference scenario of POLES world energy model. ASPEN then computes the market-equilibrium price, the flows of CDM/JI credits, the quantities exchanged and the reduction costs for each country in each sector for different global carbon market configurations. The paper develops as follows: in Section 1, we first describe the approach chosen for sectoral endowments of CO2 emission allowances for different countries or regions in 2010 and 2020; in Section 2, we actually display and discuss the MACCs derived from the POLES Reference scenario; then in Section 3, we proceed with the ASPEN software and introduce the five scenarios representing consistent configurations of the future carbon market; Section 4 later delivers and analyses the main results of this study; lastly, we present our main conclusions in Section 5. The paper shows in particular that, in compliance with the Kyoto targets, the benefits of an enlarged carbon market are significant, since more than 50% of the abatement in the short term have to be achieved in EU ETS sectors (and especially electricity sector), which may indeed use the CDM or JI credits. A second major conclusion is that in 2020 the new flexibility margins provided by the adjustment of investments in new capacities compensate for the increasing pressure towards stronger emission reductions. This reduces the relative importance of the enlarged carbon market.

Studying of the fundamentals of the emerging carbon market requires quite a lot of assumptions on the components the future carbon supply and demand. To produce a consistent and realistic assessment, we employed sources such as second NAPs under the ETS, 2005 GHG National Inventories, EIA data and POLES reference scenario results. This allowed to constitute a comprehensive database on base year emissions and 2010, 2020 emissions and endowments in different countries and regions. However, the market fundamentals analysis is also made difficult by variables such as the availability of project-based credits for which, at least for EU ETS, we took into account the limits recently suggested by the Commission. The resulting sectoral and country-based CO 2 endowments for 2010 and 2020 imply an important burden to European and other Annex B countries’ Energy sectors, that is to say primarily the electricity sector. However, the sectoral analyses based on MACCs show that the power sector is also the most flexible and reacts highly to the increases in carbon price: less in the short term, since generation capacities are fixed and only the fuel switching opportunities can be exploited, but more in the long term via the investments in low emission equipments. Weaker reduction targets, along with low MACs, prevail in the European and other Annex B countries’ Industry sectors. In ETS, the domestic reductions in Industry outweigh significantly the necessity for the purchase of project-based credits in 2020. Our analysis also indicates that one may expect the carbon prices to be around h 20 in 2010 and h 30 in 2020 in the most ‘realistic’ carbon market scenarios. If, however, there were a deviation from the framework of hypotheses developed in these scenarios, then the carbon prices may significantly vary. The benefits of importing CDM credits prove to be significant for the EU ETS in 2010 in terms of CO 2 price and compliance cost reductions. In 2020, these benefits remain but they are relatively less important for the EU ETS of 2020. The coupling with otherworldwide cap-and-trade systems induces only marginal effi- ciency gains for EU ETS. Typically, the MACs are high for the non-ETS sectors: transport and, to a lesser extent, building sectors. The recent decision of the European council to increase energy efficiency by 20% as well as to increase the renewable energy production to 20% of consumption in 2020 would also allow mobilizing more emissions reduction opportunities from these sectors. The interactions between the different objectives of the Commission’s climate and energy package remain a topic for further research.