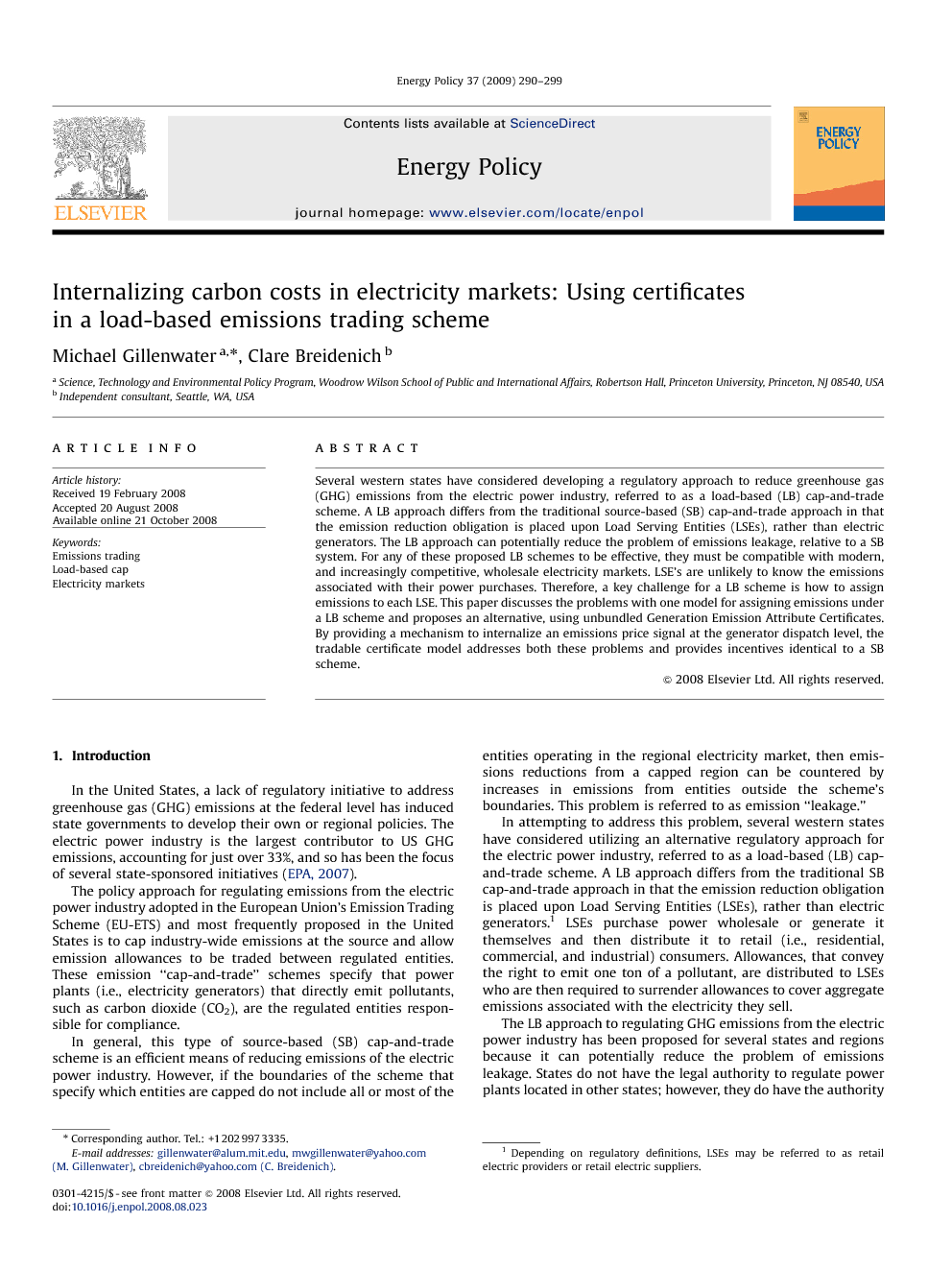 Several western states have considered developing a regulatory approach to reduce greenhouse gas (GHG) emissions from the electric power industry, referred to as a load-based (LB) cap-and-trade scheme. A LB approach differs from the traditional source-based (SB) cap-and-trade approach in that the emission reduction obligation is placed upon Load Serving Entities (LSEs), rather than electric generators. The LB approach can potentially reduce the problem of emissions leakage, relative to a SB system. For any of these proposed LB schemes to be effective, they must be compatible with modern, and increasingly competitive, wholesale electricity markets. LSE's are unlikely to know the emissions associated with their power purchases. Therefore, a key challenge for a LB scheme is how to assign emissions to each LSE. This paper discusses the problems with one model for assigning emissions under a LB scheme and proposes an alternative, using unbundled Generation Emission Attribute Certificates. By providing a mechanism to internalize an emissions price signal at the generator dispatch level, the tradable certificate model addresses both these problems and provides incentives identical to a SB scheme.

In the United States, a lack of regulatory initiative to address greenhouse gas (GHG) emissions at the federal level has induced state governments to develop their own or regional policies. The electric power industry is the largest contributor to US GHG emissions, accounting for just over 33%, and so has been the focus of several state-sponsored initiatives (EPA, 2007). The policy approach for regulating emissions from the electric power industry adopted in the European Union's Emission Trading Scheme (EU-ETS) and most frequently proposed in the United States is to cap industry-wide emissions at the source and allow emission allowances to be traded between regulated entities. These emission “cap-and-trade” schemes specify that power plants (i.e., electricity generators) that directly emit pollutants, such as carbon dioxide (CO2), are the regulated entities responsible for compliance. In general, this type of source-based (SB) cap-and-trade scheme is an efficient means of reducing emissions of the electric power industry. However, if the boundaries of the scheme that specify which entities are capped do not include all or most of the entities operating in the regional electricity market, then emissions reductions from a capped region can be countered by increases in emissions from entities outside the scheme's boundaries. This problem is referred to as emission “leakage.” In attempting to address this problem, several western states have considered utilizing an alternative regulatory approach for the electric power industry, referred to as a load-based (LB) cap-and-trade scheme. A LB approach differs from the traditional SB cap-and-trade approach in that the emission reduction obligation is placed upon Load Serving Entities (LSEs), rather than electric generators.1 LSEs purchase power wholesale or generate it themselves and then distribute it to retail (i.e., residential, commercial, and industrial) consumers. Allowances, that convey the right to emit one ton of a pollutant, are distributed to LSEs who are then required to surrender allowances to cover aggregate emissions associated with the electricity they sell. The LB approach to regulating GHG emissions from the electric power industry has been proposed for several states and regions because it can potentially reduce the problem of emissions leakage. States do not have the legal authority to regulate power plants located in other states; however, they do have the authority to regulate LSEs serving retail customers in their state, and thus emissions from all electricity consumed. To date, Oregon2 is pursuing and California3 actively considered a LB approach. Not surprisingly, imports account for a significant fraction of the electrical load served (i.e., retail sales) in each state. In California, net electricity imports account for around 30% of total load,4 but roughly 50% of the GHG emissions (CEC, 2007). In contrast, Oregon is a net exporter of electricity in years when snowfall is sufficient for hydroelectric facilities to operate near capacity. However, because of the seasonal nature of hydroelectric power, Oregon's overall consumption of electricity is still heavily dependent on imports from coal-fired power plants in Utah, Wyoming, and Montana (GAGGW, 2004; ODP, 2005). States in the West and Northeast are also considering a LB approach to a cap-and-trade program. Participants in the Western Climate Initiative, which includes Oregon and California, considered developing a regional LB scheme. And states that are part of the Regional Greenhouse Gas Initiative (RGGI) are also considering supplementing their SB cap-and-trade scheme with a LB approach that targets only the portion of electricity imported from states not participating in RGGI (e.g., Pennsylvania) (RGGI, 2007). For any LB scheme to be effective, it must be compatible with modern, and increasingly competitive, wholesale electricity markets. These markets are no longer dominated by vertically-integrated utilities. Instead, independent power producers, power marketers and brokers, and spot markets play significant roles. Because much (and in some cases, all) of the load served by a LSE is purchased from other entities, LSEs are unlikely to know the emissions associated with their power purchases. Therefore, a key challenge for a LB scheme is how to assign emissions to each LSE. Currently, the most detailed model for assigning emissions to load is that proposed in Oregon. The Oregon model requires that regulators track financial transactions for wholesale power by following the contract-paths between generators and LSEs. This paper discusses the problems with the contract-path model, and proposes an alternative, using unbundled generation emission attribute certificates (GEACs). This alternative model offers several benefits, most important of which is that it is more compatible with competitive wholesale electricity markets. Although we will briefly contrast the LB approach to an emissions cap-and-trade scheme with a SB approach, this paper does not take a position on whether a SB or LB approach is preferable. Rather, it solely aims to elaborate and justify this alternative model for a LB approach.

Regardless of whether a LB approach is preferable to a SB approach, the contract-path model for a LB emissions trading scheme has several flaws that undermine its effectiveness at reducing emissions and its compatibility with the evolution of competitive wholesale electricity markets. By providing a me- chanism to internalize an emissions price signal at the generator dispatch level, the alternative tradable certificate model described here addresses both these problems and provides incentives identical to a SB system. Whether the alleged advantages of a LB system in encouraging renewable energy and energy efficiency justify the added complexity of a third commodity market for GEACs is beyondthe scope of this paper. For further work, we recommend modeling of the price dynamics within competitive wholesale electricity markets where electricity, certificates, and allowances are all simultaneously transacted to illustrate the impacts on retail electricity prices.