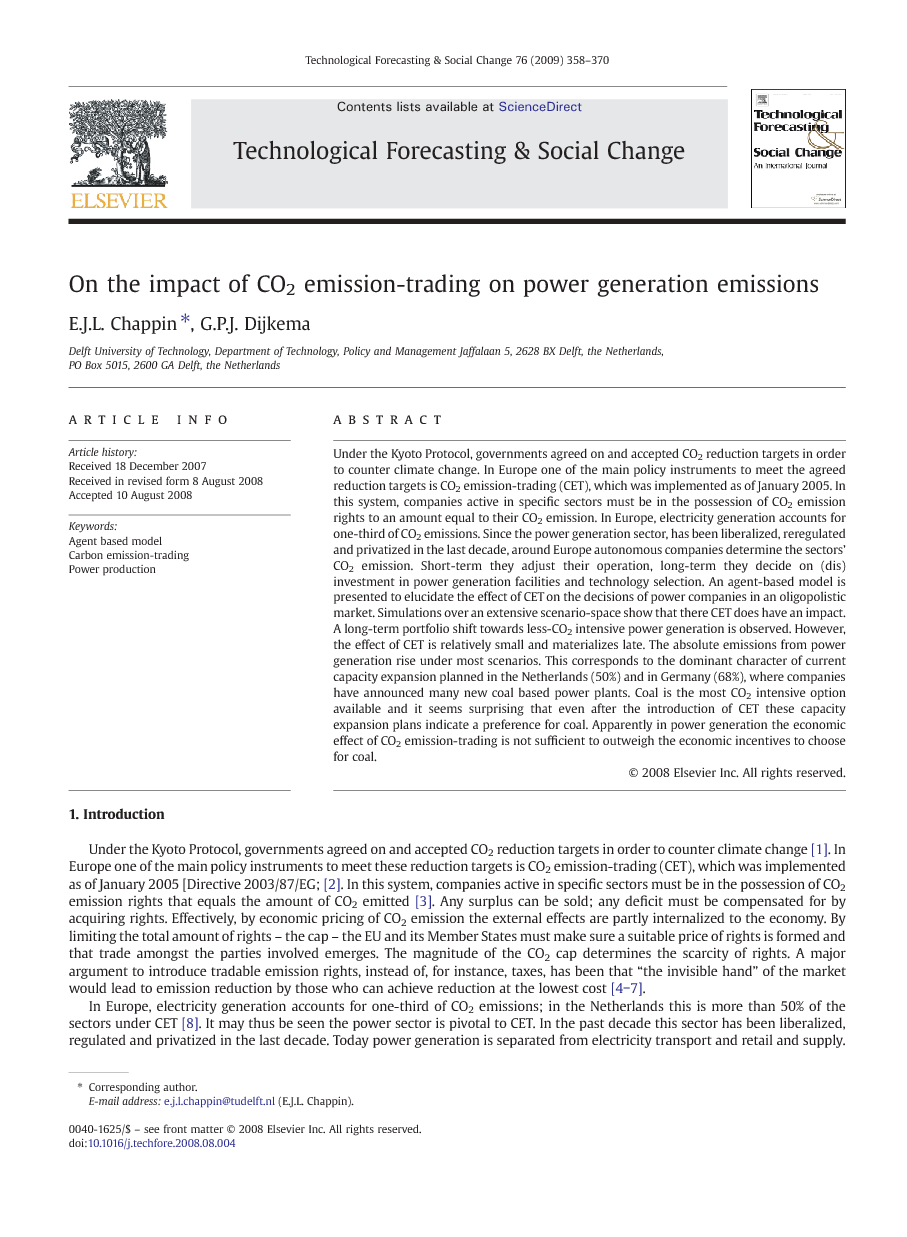 Under the Kyoto Protocol, governments agreed on and accepted CO2 reduction targets in order to counter climate change. In Europe one of the main policy instruments to meet the agreed reduction targets is CO2 emission-trading (CET), which was implemented as of January 2005. In this system, companies active in specific sectors must be in the possession of CO2 emission rights to an amount equal to their CO2 emission. In Europe, electricity generation accounts for one-third of CO2 emissions. Since the power generation sector, has been liberalized, reregulated and privatized in the last decade, around Europe autonomous companies determine the sectors’ CO2 emission. Short-term they adjust their operation, long-term they decide on (dis)investment in power generation facilities and technology selection. An agent-based model is presented to elucidate the effect of CET on the decisions of power companies in an oligopolistic market. Simulations over an extensive scenario-space show that there CET does have an impact. A long-term portfolio shift towards less-CO2 intensive power generation is observed. However, the effect of CET is relatively small and materializes late. The absolute emissions from power generation rise under most scenarios. This corresponds to the dominant character of current capacity expansion planned in the Netherlands (50%) and in Germany (68%), where companies have announced many new coal based power plants. Coal is the most CO2 intensive option available and it seems surprising that even after the introduction of CET these capacity expansion plans indicate a preference for coal. Apparently in power generation the economic effect of CO2 emission-trading is not sufficient to outweigh the economic incentives to choose for coal.

Under the Kyoto Protocol, governments agreed on and accepted CO2 reduction targets in order to counter climate change [1]. In Europe one of the main policy instruments to meet these reduction targets is CO2 emission-trading (CET), which was implemented as of January 2005 [Directive 2003/87/EG; [2]. In this system, companies active in specific sectors must be in the possession of CO2 emission rights that equals the amount of CO2 emitted [3]. Any surplus can be sold; any deficit must be compensated for by acquiring rights. Effectively, by economic pricing of CO2 emission the external effects are partly internalized to the economy. By limiting the total amount of rights – the cap – the EU and its Member States must make sure a suitable price of rights is formed and that trade amongst the parties involved emerges. The magnitude of the CO2 cap determines the scarcity of rights. A major argument to introduce tradable emission rights, instead of, for instance, taxes, has been that “the invisible hand” of the market would lead to emission reduction by those who can achieve reduction at the lowest cost [4], [5], [6] and [7]. In Europe, electricity generation accounts for one-third of CO2 emissions; in the Netherlands this is more than 50% of the sectors under CET [8]. It may thus be seen the power sector is pivotal to CET. In the past decade this sector has been liberalized, regulated and privatized in the last decade. Today power generation is separated from electricity transport and retail and supply. Relatively few, autonomous companies are in the business of large-scale power generation. They must survive in oligopolistic but competitive market-conditions. Options to reduce their CO2 emission include short-term adjustment of their operation, medium-term revamp and long-term they may decide on investment and divestment in power generation facilities and technology selection. Although the operational flexibility of power generation facilities designed for base-load operation is limited, CET will certainly stipulate further optimisation of power plant optimization. The net effect on CO2 emission is important, but an order of magnitude smaller than the possible effect of (dis)investment decisions: a coal-fire power plant emits 2.5–3 times the amount of CO2/MWh of a gas-fired plant. The CO2 emissions of wind-farms and nuclear plants are negligible. Moreover, all of these capital-intensive facilities currently have technical and economic life-spans of 25–40 years, so decisions today will determine CO2 emissions for decades. Markets served by capital-intensive facilities are known to be cyclic; the investment in a large-scale power plants may require an investment between 500 and 1500 Million Euros. Switching cost thus are high. While an emission market arguably would lead to reduction at the lowest cost, it remains to be seen whether sufficient emission reduction is achieved long-term. The central question in this paper therefore is: What long-term impact of CO2 emission-trading on CO2 emissions can be expected in electric power generation? In this paper, the effect of CET on the emissions in electric power generation is quantified with an agent-based simulation model. The paper is structured as follows. First, emission-trading, electric power production and the system perspective used are elaborated upon. Subsequently, the agent-based model setup and implementation are explained in detail. Third, model validation, assumptions and limitations are given. Fourth, the simulation results are presented and analysed. Finally, conclusions are drawn.

In comparison with no intervention, the impact of emission trading on CO 2 emissions by Dutch power production and its generation portfolio is relatively small and late: absolute emissions by electricity generation rise under most scenarios. On the longer termconventional coal is still adopted:drivenbylowcoal costs andan increase in electricitydemand, coal use appears tobe unavoidable. The share of coal is found to be more in balance with the other energy sources under CET. From these results it should not be interpreted that the presented portfolio developments will be most likely to occur. Large differences between scenarios are found, technological innovation will drive down fi xed and/or variable costs for alternatives and new alternatives might be developed, new power producers can come to the market and existing can merge or adapt their strategies. Although those are reasons why the adoption levels of coal might be lower in reality, coal is attractive for its fl exibility: using coal technology, one can co- fi re biomass and one has option to capture and store the CO 2 later. Interestingly, the fi ndings correspond to the dominant part of current capacity expansions plans in the Netherlands and Germany. An overview of plans for new power plants in these two countries is given in Table 4 , presented per fuel type. For some coal power plants planned for the Netherlands it is possible to co- fi re biomass with the coal. The biomass fi gures are calculated with a maximum of 15% co- fi red, on basis of energy content. In the Netherlands, in the coming years much capacity for natural gas will become operational. However, starting from 2010, large coal power plants are planned — modernized, but still the most CO 2 intensive option available. With a 46 – 52% share of total capacity planned, coal probably exceeds the natural gas capacity plannedIn Germany this is even worse: 68% of capacity expansion is planned to be coal- fi red power plants. This equals 30 GW e which corresponds to 1.5 times the presently installed Dutch power generation capacity. Also in the UK, the fi rst coal power plant in 20 years is planned to be built after 2010 [32] . It seems surprising that even after the introduction of CETcurrent power generation capacity expansion plans indicate a preference for coal. Coal has even more advantages than was re fl ected in the models. Apparently the economic effect of CO 2 emission-trading is not suf fi cient to outweigh the incentives to choose for coal. As also comes out of the model, such a shift is not easily reversed: power plants have lifetimes of decades. The next step is a model with a strict cap, which is reduced by 1.7% each year, and where rights are not grandfathered but to be acquired by auctioning. This re fl ects the current thoughts of the European Union on the post-2013 ETS. In such a model, the power generation sector is expected to incur much larger costs for the emission-rights. The amount available gets smaller each year. Additional further research is to compare CETas per ETS phase I and II (this paper) and post-2013 with a system of carbon taxation and other carbon policy types. A model incorporating endogenous or exogenous learning curves is on the research agenda as well and might give more concrete insight in developments of the power generation portfolio. In addition, the other industries under ETS might be explicitly addressed in a future model.