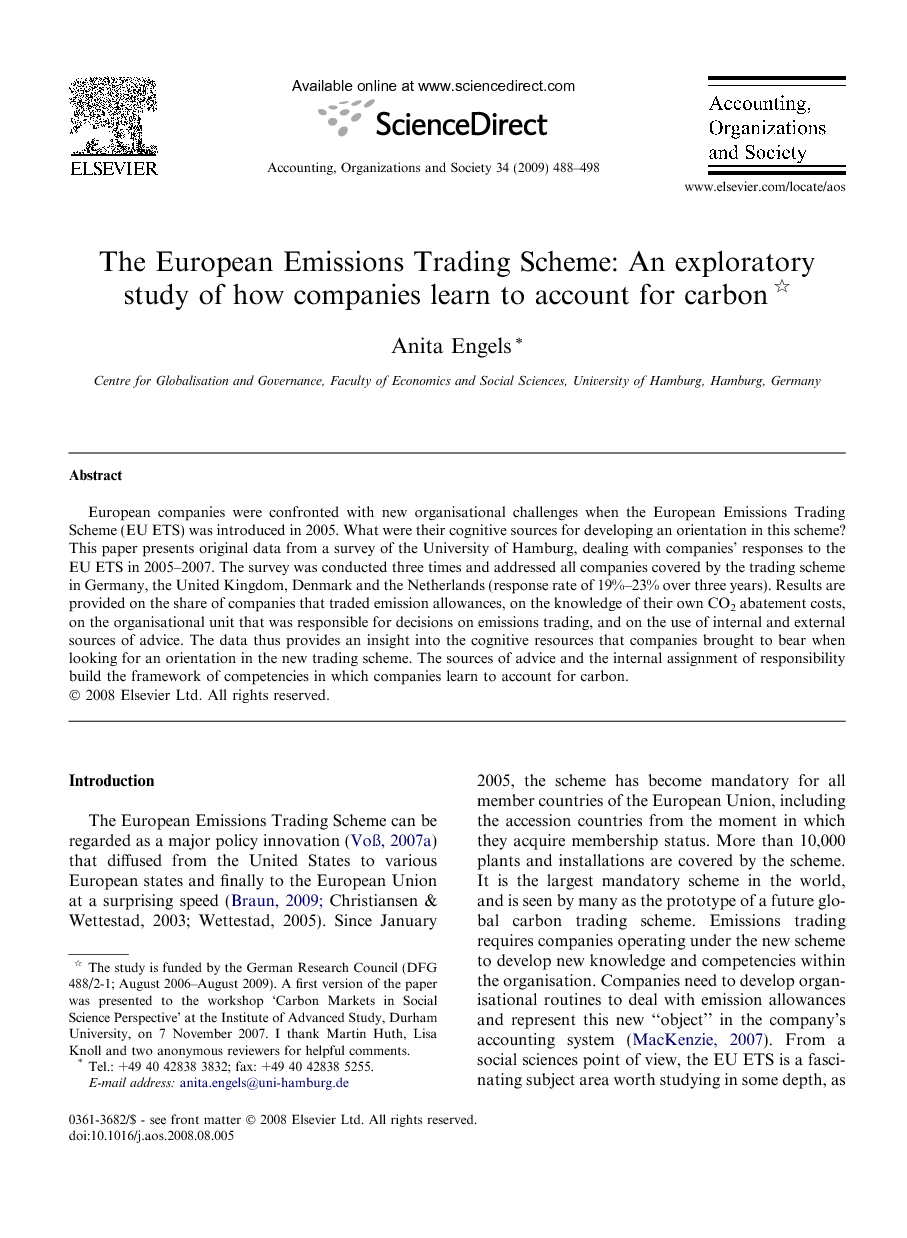 European companies were confronted with new organisational challenges when the European Emissions Trading Scheme (EU ETS) was introduced in 2005. What were their cognitive sources for developing an orientation in this scheme? This paper presents original data from a survey of the University of Hamburg, dealing with companies’ responses to the EU ETS in 2005–2007. The survey was conducted three times and addressed all companies covered by the trading scheme in Germany, the United Kingdom, Denmark and the Netherlands (response rate of 19%–23% over three years). Results are provided on the share of companies that traded emission allowances, on the knowledge of their own CO2 abatement costs, on the organisational unit that was responsible for decisions on emissions trading, and on the use of internal and external sources of advice. The data thus provides an insight into the cognitive resources that companies brought to bear when looking for an orientation in the new trading scheme. The sources of advice and the internal assignment of responsibility build the framework of competencies in which companies learn to account for carbon.

The European Emissions Trading Scheme can be regarded as a major policy innovation (Voß, 2007a) that diffused from the United States to various European states and finally to the European Union at a surprising speed (Braun, 2009, Christiansen and Wettestad, 2003 and Wettestad, 2005). Since January 2005, the scheme has become mandatory for all member countries of the European Union, including the accession countries from the moment in which they acquire membership status. More than 10,000 plants and installations are covered by the scheme. It is the largest mandatory scheme in the world, and is seen by many as the prototype of a future global carbon trading scheme. Emissions trading requires companies operating under the new scheme to develop new knowledge and competencies within the organisation. Companies need to develop organisational routines to deal with emission allowances and represent this new ‘‘object’’ in the company’s accounting system (MacKenzie, 2007). From a social sciences point of view, the EU ETS is a fascinating subject area worth studying in some depth, as it introduces a new uniform regulation into national contexts that vary substantially with regard to their regulatory traditions and their national political economies. As many studies have demonstrated, these contexts serve as an important institutional environment to companies and their decision-making processes (e.g., Hall and Soskice, 2001, Heritier et al., 1996 and Lane and Bachmann, 1996Lane and Bachmann (1996) has been changed to Lane and Bachman (1996) as per the list. Please check.). It can therefore be expected – and has already been shown (Bailey, 2007 and Engels et al., 2008) – that companies in various European member states find different typical solutions to the problem of accounting for their carbon emissions and finding an orientation in the new trading scheme. The question of which sources of knowledge and expertise companies choose to take into consideration is crucial to this process, as the new tool of emissions trading is open to a whole range of different interpretations, depending on the emphasis of the respective problem framework (e.g., legal, financial, technological emphasis). This article presents selected findings of a quantitative survey of all companies covered by the scheme in Germany, the UK, the Netherlands and Denmark. Data are given on the sources of advice companies used during the first three years of the EU ETS, and on the organisational unit within the company that was assigned responsibility for emissions trading. The results clearly indicate important variations across countries. The article is organised in four sections: first, a brief introduction of the EU ETS will be given, followed by an account of the methodology applied in the questionnaire and the type of data presented in this article. Third, the results are given in a cross-country comparison that also looks at varying emphases over time. Fourth, the implications of these results are discussed with regard to the question of how companies in the EU ETS learn to account for carbon.

What are the implications of these rather descrip- tive findings for the question of how companies learn to account for carbon? The results of the sur- vey indicate that companies use various sources of information and expertise to make sense of carbon markets. The distribution patterns vary across countries and over time. The sources of expertise can form specific cognitive bases in which compa- nies develop a new mindset to account for carbon. This can be demonstrated by comparing banks with industrial associations. The latter were particularly important in Germany. However, German indus- trial associations were very reluctant to accept the new environmental policy tool and engaged in lob- bying activities to prevent the EU ETS from becom- ing mandatory for German companies. When this failed, they focussed on supporting companies to file claims against their individual notification in the National Allocation Plan ( Seht and Ott, 2000; Schafhausen, 2006 ). Their expertise would therefore focus not on the trading aspects but rather on legal complaints. It would be difficult to derive an active trading strategy from this type of expertise alone. On the other hand, banks, and to some degree insurance companies, would rather see emission allowances in a financial framework, in which allowances could be used to hedge against financial risks or even to achieve additional gains through arbitrage. It is also interesting to see that specialised private consulting firms were the single most impor- tant source of expertise, as they offer exclusive advice to the individual company. Obviously, emis- sions trading was regarded by many companies as a strategic problem that did not allow them to rely on publicly available general information but rather forced them to seek customised support. Through participation in workshops, on the other hand, com- panies had access to a shared pool of knowledge. They could exchange information with other partic- ipants and find out how emissions trading was regarded and interpreted by other companies.Many companies use external sources of exper- tise, combine this with the internal insights gener- ated by specialised company units, and develop a strategic response to the EU ETS that is imple- mented by yet another company unit. In an ideal typical perspective, one company might use a bank as external source and Portfolio Management as an internal source of advice before assigning the responsibility for emissions trading to the com- pany’s specialised trading floor. Another might combine external support by an industrial associa- tion (critical of the EU ETS) with internal advice by the Communications Department, while the responsible unit is the Manufacturing unit itself. We would expect a strong trading or even arbitrage perspective in the former case and a reluctant and compliance-related orientation in the latter. Ongo- ing research will provide a more complete picture of how this process evolves within the organisation. Therefore, this type of data is interesting at two levels of analysis: first, at the company level the indi- vidual combination of different sources of advice and the change over time will probably lead to a specific understanding of emissions trading and how to deal with it. Based on the findings of the quantitative sur- vey, several qualitative company case studies were conducted in 2008 to analyse this process in more detail. 4 Second, the results indicate that companies are confronted with different national cultures of expertise ( Engels et al., 2008 ). This argument is clo- sely related to other findings discussed in the litera- ture on emissions trading. One finding is that the degree to which emissions trading can diffuse to new political constituencies depends on the existence or emergence of a specialised service industry ( Voß, 2007a, 2007b ). It is plausible to assume that this service industry is not uniformly distributed across Europe, but that the type of specialisation (technical, financial, law), the size of the service providers, and the structure and density of the service industry var- ies across countries ( Engels et al., 2008 ). A further important finding is that national regulatory tradi- tions ease or hamper the companies’ ability to learn to account for carbon in the framework of a trading scheme. E.g., while the EU ETS presented new chal- lenges for both German and UK companies, the lat- ter were able to tie the new challenges to pastexperiences with market based mechanisms. On the other hand, for German companies the introduction of emissions trading really meant a break in the path which required fundamentally new ways of thinking about industrial CO 2 emissions ( Bailey, 2007 ). However, apart from information on which per- spectives are developed, the survey also reveals a level of ignorance among some of the companies, showing that they have not used Phase 1 to develop such a perspective. One indicator for this is the large share of companies that up to this date do not know their own abatement costs. This remains a puzzle, even with the explanation that an allowance price of near zero does not incur costly search strategies within the companies. It should have been obvious that emitting carbon will be restricted and will most probably continue to become more expensive in the long run. Moreover, a number of companies did not use external sources of advice, and at times no internal sources of expertise were consulted. In some cases, companies did not even assign an explicit responsibility for emissions trading. In their preli- minary assessment of lessons learned from the first trading period of the EU ETS, Convery et al. con- clude that ‘‘[m]arket efficiency depends on market participants’ ability to access reliable information’’ (p. 15). After all, this not only applies to the infra- structures and data banks provided by the European Commission, but also to the companies’ willingness to invest in knowing their own (carbon) market fundamentals.