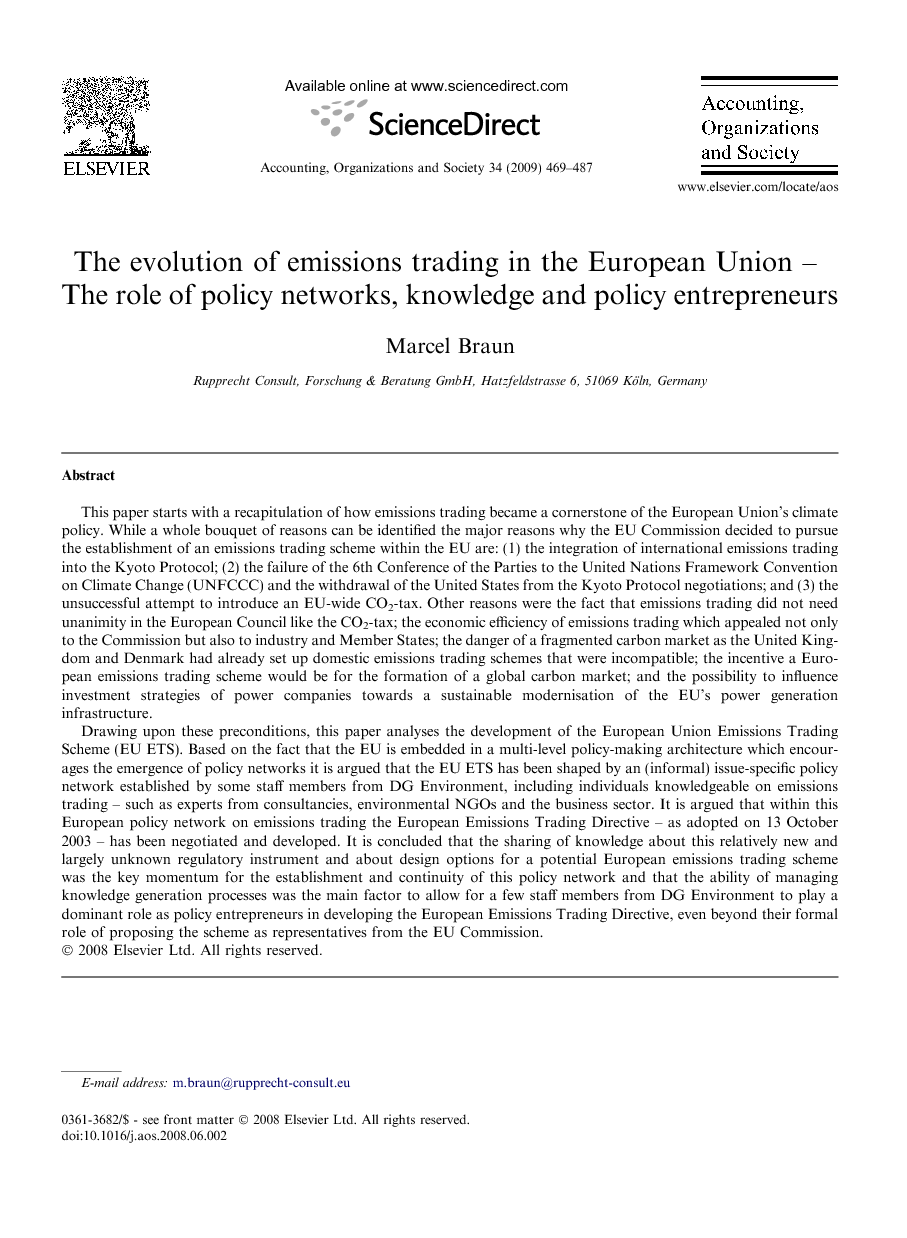 This paper starts with a recapitulation of how emissions trading became a cornerstone of the European Union’s climate policy. While a whole bouquet of reasons can be identified the major reasons why the EU Commission decided to pursue the establishment of an emissions trading scheme within the EU are: (1) the integration of international emissions trading into the Kyoto Protocol; (2) the failure of the 6th Conference of the Parties to the United Nations Framework Convention on Climate Change (UNFCCC) and the withdrawal of the United States from the Kyoto Protocol negotiations; and (3) the unsuccessful attempt to introduce an EU-wide CO2-tax. Other reasons were the fact that emissions trading did not need unanimity in the European Council like the CO2-tax; the economic efficiency of emissions trading which appealed not only to the Commission but also to industry and Member States; the danger of a fragmented carbon market as the United Kingdom and Denmark had already set up domestic emissions trading schemes that were incompatible; the incentive a European emissions trading scheme would be for the formation of a global carbon market; and the possibility to influence investment strategies of power companies towards a sustainable modernisation of the EU’s power generation infrastructure. Drawing upon these preconditions, this paper analyses the development of the European Union Emissions Trading Scheme (EU ETS). Based on the fact that the EU is embedded in a multi-level policy-making architecture which encourages the emergence of policy networks it is argued that the EU ETS has been shaped by an (informal) issue-specific policy network established by some staff members from DG Environment, including individuals knowledgeable on emissions trading – such as experts from consultancies, environmental NGOs and the business sector. It is argued that within this European policy network on emissions trading the European Emissions Trading Directive – as adopted on 13 October 2003 – has been negotiated and developed. It is concluded that the sharing of knowledge about this relatively new and largely unknown regulatory instrument and about design options for a potential European emissions trading scheme was the key momentum for the establishment and continuity of this policy network and that the ability of managing knowledge generation processes was the main factor to allow for a few staff members from DG Environment to play a dominant role as policy entrepreneurs in developing the European Emissions Trading Directive, even beyond their formal role of proposing the scheme as representatives from the EU Commission.

When in 1968 Canadian economist John H. Dales published his book Pollution Property and Prices ( Dales, 1968 ), he might not have guessed the importance of his idea of emissions trading for today’s climate policy. But since then, his idea has come a long way and the trading of greenhouse gas emissions has become a key policy instrument to tackle the problem of global climate change. On a global level, emissions trading between govern- ments has been established as one of three flexible mechanisms in the framework of the Kyoto Proto- col. On the national level, many industrialised coun- tries – ratifiers as well as non-ratifiers of the Kyoto Protocol – have either introduced or are considering company-based emissions trading systems (cf. Schu ̈ le & Sterk, 2008; Sterk, Braun, Haug, Korytarova, & Scholten, 2006 ). And on the supranational level, the European Union established today’s largest company-based greenhouse gas emissions trading scheme operating since January 2005. It encom- passes about 11,500 installations from all its Mem- ber States, responsible for around a third of the EU’s greenhouse gas emissions, and roughly 45% of the EU’s CO 2 emissions ( Vis, 2006, p. 48 ). In order to reach the Community’s emissions reduction commitment of minus 8% compared to 1990 agreed to in the Kyoto Protocol the European Commission proposed the establishment of a Euro- pean Union Emissions Trading Scheme (EU ETS) in the framework of its Post-Kyoto Strategy in June 1998 ( European Commission, 1998 ). The proposal was followed by a Green Paper in March 2000 ( European Commission, 2000 ), a draft directive of the European Commission in October 2001 ( Euro- pean Commission, 2001a ), and a binding EU frame- work directive – the European Emissions Trading Directive – on 13 October 2003 ( European Commis- sion, 2003a ). After having been implemented by all EU Member States, the EU ETS finally went into effect on 1 January 2005 encompassing CO 2 emis- sions from combustion plants, oil refineries, coke ovens, iron and steel plants, and factories making cement, glass, lime, brick, ceramics, pulp and paper. By now emissions trading has developed into one of the EU’s major instruments to combat climate change and both, the European Commission and the European Council have stated that they regard the EU ETS as an ‘‘essential instrument for achiev- ing the medium- and long-term emission reductions that are necessary to stabilise greenhouse gas con-centrations in the atmosphere.

Based on the fact that policy-making in the EU is embedded into a multi-level governance system which encourages the emergence of policy networks it has been elucidated how the European emissions trading scheme has been established in the frame- work of an (informal) policy network built on the sharing of knowledge about emissions trading. It is argued that the European Emissions Trading Directive has been developed by an issue-specific policy network: the European policy network on emissions trading which has been established by staff members from DG Environment, including experts from consultancies, environmental NGOs and the business sector. It is concluded that thesharing of knowledge about emissions trading and design options for emissions trading schemes was the key momentum for the establishment and conti- nuity of this policy network and that the possession of knowledge and the control over the knowledge being shared were the main factors to allow for a few staff members from DG Environment to play a dominant role as policy entrepreneurs for the development of the emissions trading directive, even beyond their formal role of just proposing the scheme as representatives from the EU Commission. From a sociological perspective this ties up with the debate on the relationship between knowledge and power going back to Francis Bacon’s famous aphorism ‘scientia potentia est’, these days usually translated as ‘‘knowledge is power ” , from his book Meditationes Sacrae (1597). The analysis above clearly has shown that ‘‘knowledge and information are a resource that identifies the powerful from the non-powerful ” ( Bennett & Howlett, 1992, p. 290 ) as the EU ETS has largely been established by a few effective policy entrepreneurs from DG Envi- ronment on the basis of the knowledge they gained from – consciously or unconsciously – managing the European policy network on emissions trading. Most likely, they would not have been able to take up this dominant role if they had not had the possi- bility to always be a step ahead as regards knowl- edge about emissions trading compared to other, formally more powerful participants in the negotia- tion process. This puts the acquisition of knowledge at the cen- tre of modern policy-making. Yet, in policy-making processes knowledge is not per se linked with power. Power depends on the kind of knowledge someone disposes of as Foucault (1991) has already discussed in his work on ‘governmentality’, a term which points to the notion that power – in the sense of governmental power – is not essentially limited to the state and that power is increasingly dependent on the availability of a specific kind of knowledge. In this regard, Crozier and Friedberg (1993, p. 50f) . have identified expert knowledge as an impor- tant source of power for an actor in a network. Powerful is someone who has issue-specific knowl- edge relevant for a certain policy, in this case knowl- edge about emissions trading, in particular knowledge about how it works and knowledge about the potential (economic) impacts of different design features of emissions trading schemes. Those who had such knowledge – experts from consultancies, environmental NGOs, individual companies and business associations – were able to influence the policy-making process in the framework of the European policy network on emissions trading which they were a part of as knowledgeable individ- uals. But in the end, the most knowledgeable indi- viduals were also the most powerful ones: some staff members from DG Environment that were able to take up the role of policy entrepreneurs based on their role as ‘managers of knowledge generation’ within the European policy network on emissions trading. However, it requires further research whether these conclusions also apply to policy-making pro- cesses regarding the development of other policy instruments. Is it really the existence of an issue-spe- cific policy network which enables some members of the network to become policy entrepreneurs, and is this based on being more knowledgeable than other members of the network? And could it have been that other non-state members of the policy network instead of staff members from DG Environment could have taken up the role as policy entrepreneurs or is the condition to take up a dominant role rather attached to the hierarchy criterion of being a repre- sentative from the state and of being formally responsible for steering the policy-making process? These questions may be pulled together with the theoretical discussion if governance processes in multi-level systems can better be grasped by the con- cept of hierarchy, market or network ( Mayntz, 1996; Powell, 1990; Weyer, 2000 ). It seems as that knowledge might serve as an important explanan- dum in this debate.