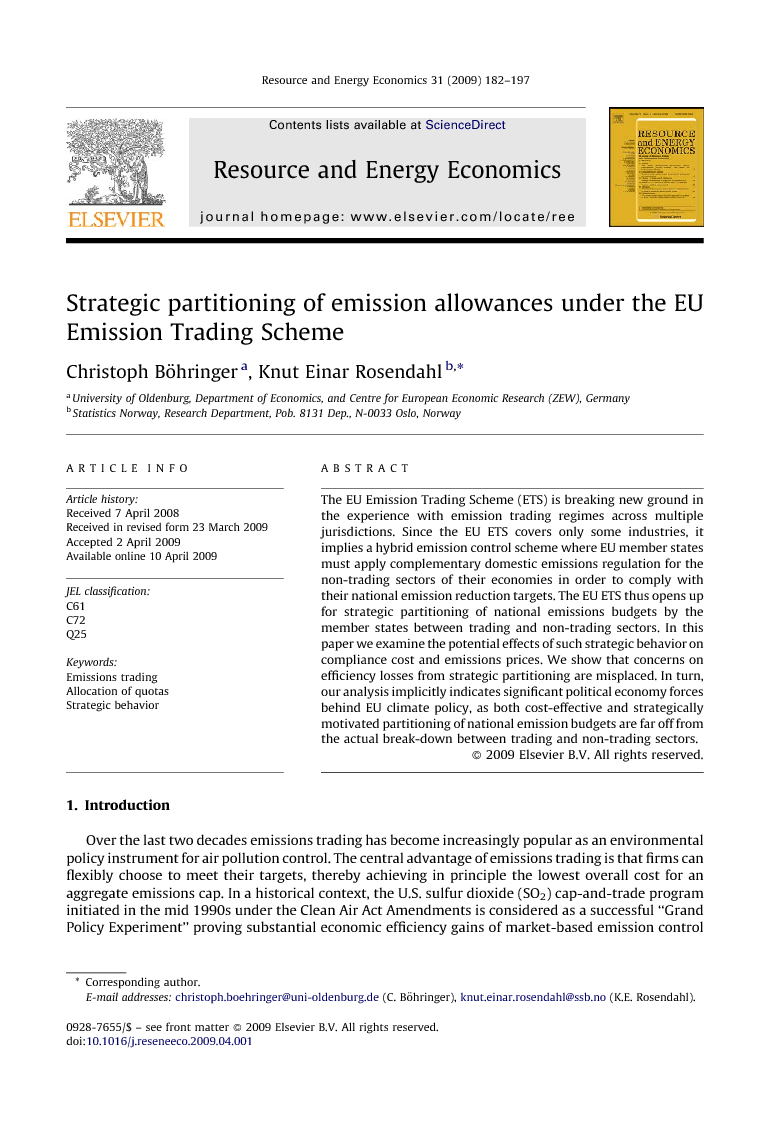 The EU Emission Trading Scheme (ETS) is breaking new ground in the experience with emission trading regimes across multiple jurisdictions. Since the EU ETS covers only some industries, it implies a hybrid emission control scheme where EU member states must apply complementary domestic emissions regulation for the non-trading sectors of their economies in order to comply with their national emission reduction targets. The EU ETS thus opens up for strategic partitioning of national emissions budgets by the member states between trading and non-trading sectors. In this paper we examine the potential effects of such strategic behavior on compliance cost and emissions prices. We show that concerns on efficiency losses from strategic partitioning are misplaced. In turn, our analysis implicitly indicates significant political economy forces behind EU climate policy, as both cost-effective and strategically motivated partitioning of national emission budgets are far off from the actual break-down between trading and non-trading sectors.

ThedecentralizedEUETSopensupforstrategicpartitioningofemissionallowancesbythemember states. Based on simulations with a partial equilibrium model of the EU carbon market, we have examined the potential effects of such strategic behavior on carbon value and abatement costs. We have found that strategic partitioning of all EU member states has only minor effects on total compliance cost and the price of tradable emission allowances as compared to a cost-effective outcome with comprehensive competitive emissions trading. When we refer to the policy practice of partitioning asevident in thenationalallocation plans, single countriescan havesome markedimpact on the allowance price in the EU ETS: given the actual—rather cost-ineffective—NAPs by other countries, an individual country may significantly benefit from changing its own NAP. However, most ofthebenefitcomesfromthealignmentofitsmarginalabatementcostinthenon-tradingsectorswith the EU ETS carbon value rather than the strategic manipulation of the ETS value itself. While our analysis suggest that market power turns out to be quantitatively unimportant in the contextoftheEUETS,itmaybecomeanissuewhenweconsiderlinkinginitiativesbetweentheEUETS and emission trading schemes in other countries (including the USA, Japan, or Canada). With fewer, butlargerstrategicplayers,agameinallocationofemissionallowancescouldinthatcaseleadtomore significant strategic effects than what we have found for the EU ETS. Hence, the general issue of strategic allowance allocation may become more important when we think about global trading initiatives beyond the EU ETS. In our present analysis we have only looked at the terms of trade effects related to the price of emission allowance. Obviously, climate policies in the EU will also affect prices of emission-intensive goods. Thus, member states might exploit a broader suite of terms-of-trade effects through strategicallowance allocation. While such an analysis is beyond the scope of the present paper with its partial equilibrium framework, it could provide an interesting future research topic for applied general equilibrium analysis.