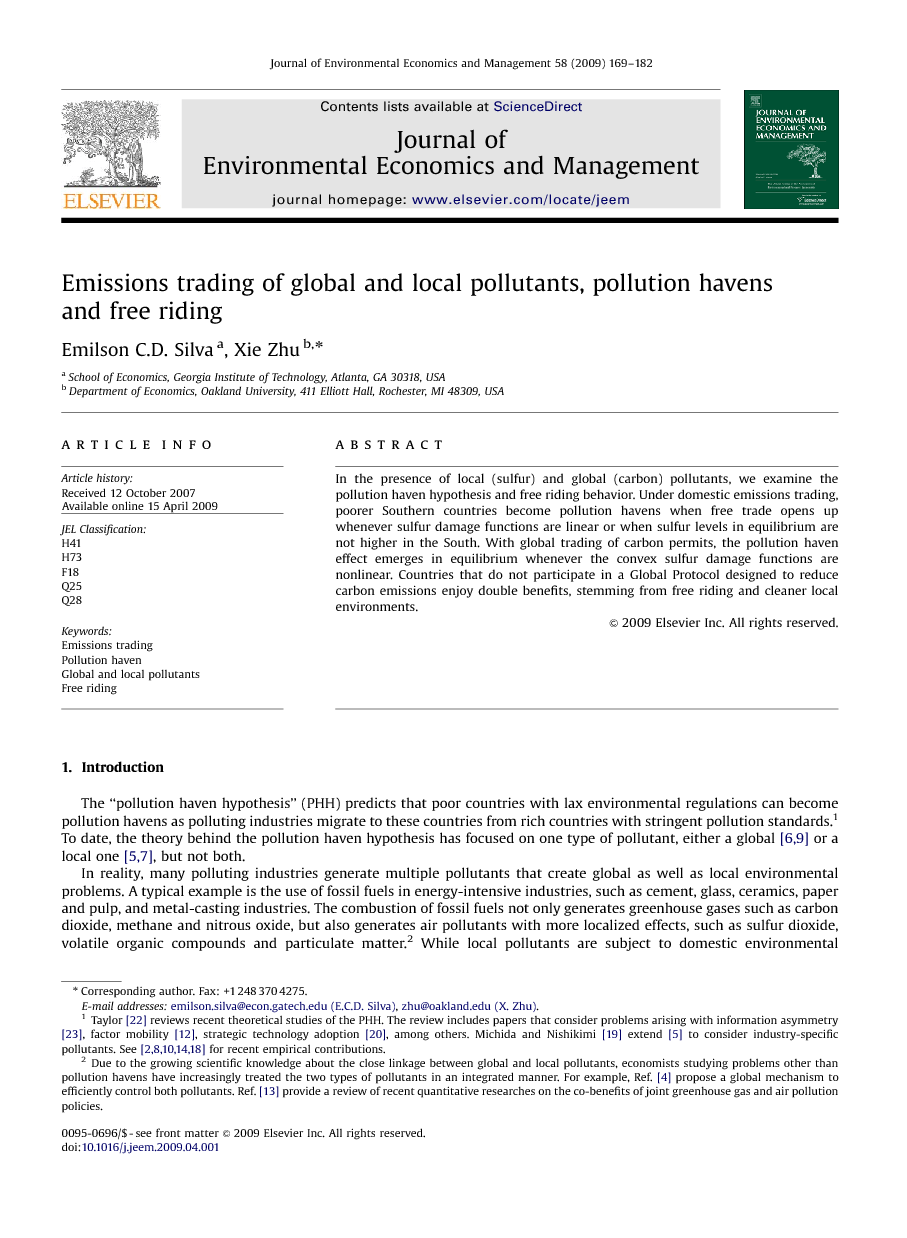 In the presence of local (sulfur) and global (carbon) pollutants, we examine the pollution haven hypothesis and free riding behavior. Under domestic emissions trading, poorer Southern countries become pollution havens when free trade opens up whenever sulfur damage functions are linear or when sulfur levels in equilibrium are not higher in the South. With global trading of carbon permits, the pollution haven effect emerges in equilibrium whenever the convex sulfur damage functions are nonlinear. Countries that do not participate in a Global Protocol designed to reduce carbon emissions enjoy double benefits, stemming from free riding and cleaner local environments.

The “pollution haven hypothesis” (PHH) predicts that poor countries with lax environmental regulations can become pollution havens as polluting industries migrate to these countries from rich countries with stringent pollution standards.1 To date, the theory behind the pollution haven hypothesis has focused on one type of pollutant, either a global [6] and [9] or a local one [5] and [7], but not both. In reality, many polluting industries generate multiple pollutants that create global as well as local environmental problems. A typical example is the use of fossil fuels in energy-intensive industries, such as cement, glass, ceramics, paper and pulp, and metal-casting industries. The combustion of fossil fuels not only generates greenhouse gases such as carbon dioxide, methane and nitrous oxide, but also generates air pollutants with more localized effects, such as sulfur dioxide, volatile organic compounds and particulate matter.2 While local pollutants are subject to domestic environmental regulations, global pollutants may be regulated through domestically administered regimes (e.g., national carbon taxes or domestic carbon emission permit markets) or, through certain international arrangement. With the entry into force of the Kyoto Protocol, international efforts are being made to set up a global carbon dioxide emission permit market to reduce greenhouse gas emissions. An important question yet to be addressed by the literature is: does a pollution-intensive industry obey the PHH if it generates multiple pollutants leading to negative global and local externalities, taking into account the impacts of different global pollution control mechanisms? Ignoring either type of pollutant does not produce a sufficient framework to check the PHH. One of the main motivations of the current paper is to answer the question above by exploring pollution-intensive trade flows when the dirty industry faces regulations of both global and local pollutants. For this purpose, we introduce a global pollutant into the pollution haven framework of Copeland and Taylor [7] and establish a North–South trade model where the production of the dirty good releases emissions of a global pollutant – carbon dioxide—and of a local pollutant – sulfur dioxide. We show that if pollutants are controlled through the creation of domestic permit markets, the conventional logic of the PHH goes through whenever the sulfur damage functions are linear. Allowing international carbon dioxide emissions trading with global participation equalizes carbon permit prices across countries. This eliminates the pollution haven effect for an industry generating only carbon dioxide emissions [6, pp. 727]. If the dirty industry also generates sulfur emissions and the sulfur damage functions are linear, sulfur permit prices are also equalized across nations. Similar to the single global pollutant case, the pollution haven effect disappears because there is no difference in the stringency of Northern and Southern environmental policies. If instead, the convex sulfur damage functions are nonlinear, the pollution haven effect is present in equilibrium. It results from higher sulfur permit prices in the North. Less ideally, as suggested by the current state of the Kyoto Protocol, international carbon dioxide emissions trading may not feature global participation. An immediate implication is that the carbon emission abatement efforts made by the Kyoto signatories may be ineffective if non-participating countries respond by increasing their carbon emissions, with the overall increase offsetting the reduction promoted by the coalition of Kyoto countries. The economic literature has analyzed how carbon emission cutbacks in the Kyoto countries may increase carbon emissions in non-participating countries due to the free riding effect, changes in the prices of fossil fuels, or changes in the prices of energy-intensive goods [1], [9] and [15]. Our focus in this paper, however, will be the free riding effect [9] and [16], which occurs with fixed world prices. Free riding behavior originates from strictly convex environment damage functions. We show that nations that do not participate in a Global Protocol that attempts to reduce carbon emissions will emit more carbon dioxide in response to carbon emission mitigation of Global Protocol nations. However, another important yet unexplored aspect of the impacts of free riding is how the nations’ local environmental quality is affected. Our investigation suggests stronger free riding incentives if local environmental quality is accounted for. By emitting more carbon dioxide, any non-participating country would have a higher level of income, which leads the government in that country to tighten local environmental policy and issue fewer sulfur permits. Hence, non-participants enjoy double benefits by staying out of the Global Protocol: free ride on global pollution reduction efforts with the benefit of a cleaner local environment. The scenario in every Global Protocol nation is opposite: they spend more resources to reduce carbon emissions and suffer from deteriorating local environments due to increases in sulfur emissions.

This paper presents a pollution haven model in which the polluting industry generates one global pollutant and one local pollutant. If the global and the local pollutants are regulated through national emissions permit markets, carbon permit prices are higher in the richer Northern countries. If the sulfur damage functions are linear or if the sulfur pollution level in each Northern country is at least as high as in each Southern country in equilibrium for nonlinear convex sulfur damage functions, the South exports the dirty good and North exports the clean good with the opening up of international goods trade. If the global pollutant is regulated through a global permit market and the sulfur damage function is nonlinear, sulfur permit prices are higher in the North than in the South, implying that the Southern countries become pollution havens as goods trade opens up. We also demonstrate that cutbacks of carbon emissions by a Global Protocol, mirroring the Kyoto Protocol, may generate double benefits for non-participating nations. Non-participants not only free ride on the cutbacks of carbon emissions of the Global Protocol nations, but also enjoy a cleaner local environment. The effects for each participating nation are opposite. They spend more resources with carbon emission abatement and notice their local environments deteriorate due to higher sulfur emissions. Our analysis should be viewed as a first step in studying the relationship between international trade and the location of industries emitting multiple pollutants. Future work should examine the impacts of cutbacks of carbon emissions by nations that belong to a Global Protocol and the reactions of non-participating nations on the dirty good’s price as well as the many possible policy games played by large countries, among other things