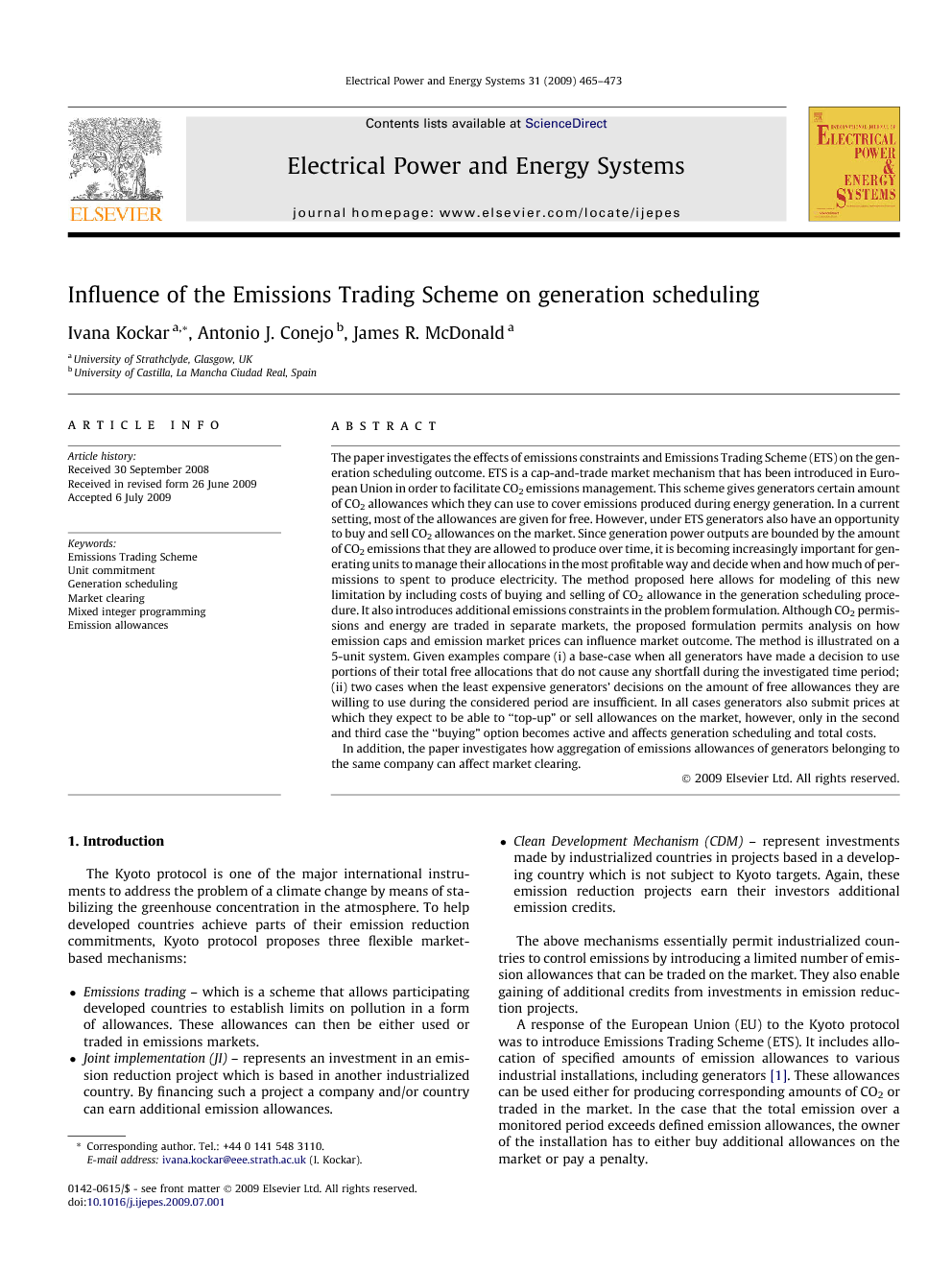 The paper investigates the effects of emissions constraints and Emissions Trading Scheme (ETS) on the generation scheduling outcome. ETS is a cap-and-trade market mechanism that has been introduced in European Union in order to facilitate CO2 emissions management. This scheme gives generators certain amount of CO2 allowances which they can use to cover emissions produced during energy generation. In a current setting, most of the allowances are given for free. However, under ETS generators also have an opportunity to buy and sell CO2 allowances on the market. Since generation power outputs are bounded by the amount of CO2 emissions that they are allowed to produce over time, it is becoming increasingly important for generating units to manage their allocations in the most profitable way and decide when and how much of permissions to spent to produce electricity. The method proposed here allows for modeling of this new limitation by including costs of buying and selling of CO2 allowance in the generation scheduling procedure. It also introduces additional emissions constraints in the problem formulation. Although CO2 permissions and energy are traded in separate markets, the proposed formulation permits analysis on how emission caps and emission market prices can influence market outcome. The method is illustrated on a 5-unit system. Given examples compare (i) a base-case when all generators have made a decision to use portions of their total free allocations that do not cause any shortfall during the investigated time period; (ii) two cases when the least expensive generators’ decisions on the amount of free allowances they are willing to use during the considered period are insufficient. In all cases generators also submit prices at which they expect to be able to “top-up” or sell allowances on the market, however, only in the second and third case the “buying” option becomes active and affects generation scheduling and total costs. In addition, the paper investigates how aggregation of emissions allowances of generators belonging to the same company can affect market clearing.

To facilitate reduction of CO 2 emissions the EU Commission has introduced an Emission Trading Scheme which essentially caps the amount of CO 2 that a generator can produce without penalty. For any emissions that are above the set level, a generator has an op- tion to either buy additional permissions on the market, or pay a relatively high penalty. The allocation procedures are specific for each EU country, however they all need to reduce emissions and thus will have to limit the amount of allowances that can be allocated. The generation sector is part of the scheme and caps put on gen- erating units are expected to affect market clearing results. In the UK for example, only the energy sector will see its caps set a at lower level, which means that costs associated with purchasing additional permits will affect electricity prices, generation schedul- ing as well as decisions of generating units. This paper investigates how emission caps affect generation scheduling. The proposed model includes cost of emission trading into the cost function, and also adds a set of emissions constraints to account for emission caps. Although emissions are traded in a separate market, this model enables investigations of how deci- sions of generators made on that market can affect power system operation and electricity market outcomes. The presented case study shows that this cap-and-trade mech- anism may have a significant influence on the outcome of market clearing, as some units may not be able to generate due to their emission caps. Although all regenerators were allowed to buy addi- tional allowances on the emissions market, high prices may dis- courage them from purchases, and thus expansive generators may be requested to supply the load. The paper also indicates that aggregation of generating units that belong to the same Genco may alleviate the problem, if the company has a diverse portfolio. Fur- thermore, analysis shows that even additional costs associated with emissions may be more economical than using expensive generation. The analysis also indicates to generators what are the prices and the levels of additional costs associated with emissions trading that can be passed to costumers without significant loss of businesses. Thus, the proposed model provides for analysis of the effects that ETS may have on electricity markets and behavior of generators