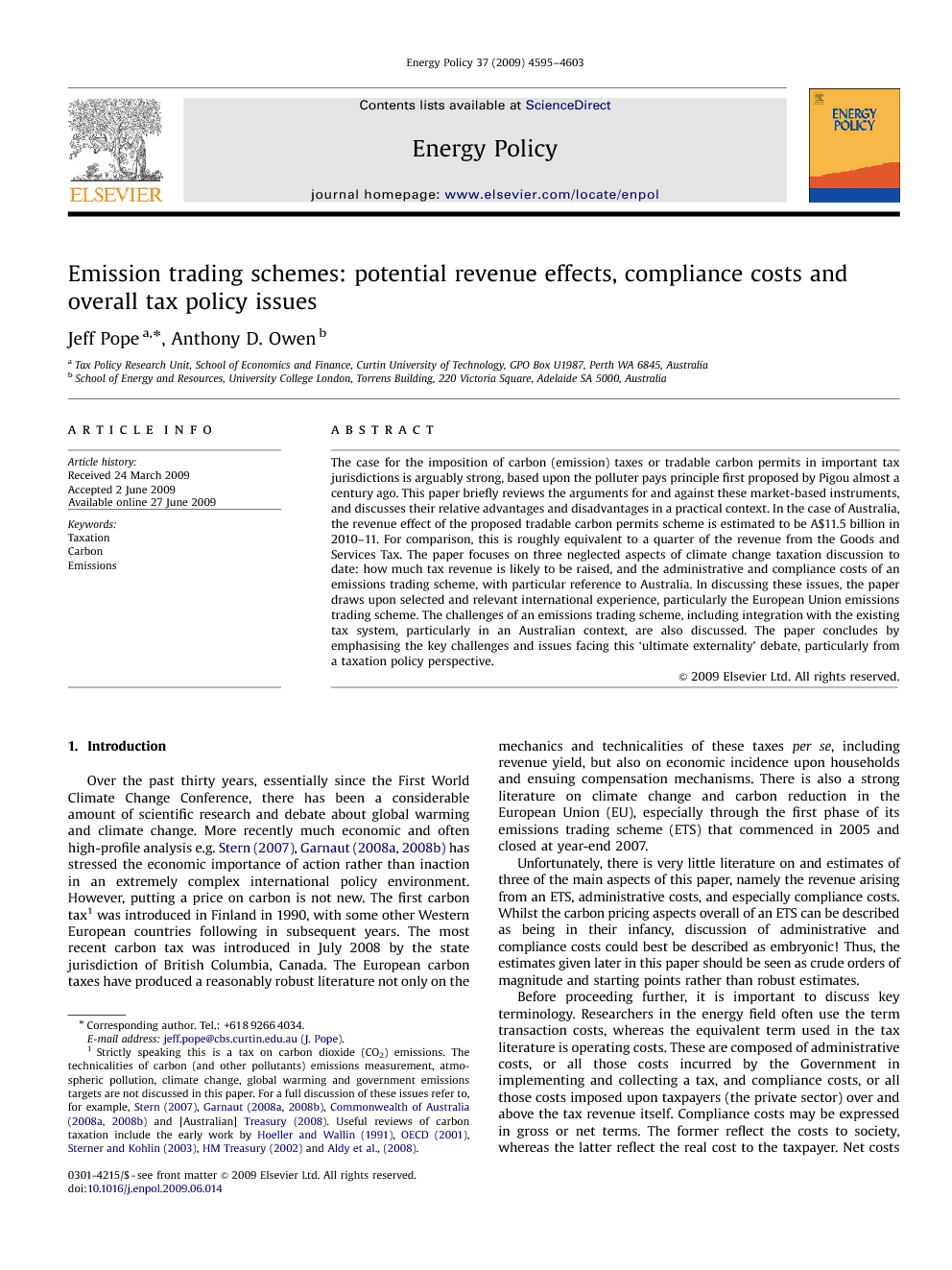 The case for the imposition of carbon (emission) taxes or tradable carbon permits in important tax jurisdictions is arguably strong, based upon the polluter pays principle first proposed by Pigou almost a century ago. This paper briefly reviews the arguments for and against these market-based instruments, and discusses their relative advantages and disadvantages in a practical context. In the case of Australia, the revenue effect of the proposed tradable carbon permits scheme is estimated to be A$11.5 billion in 2010–11. For comparison, this is roughly equivalent to a quarter of the revenue from the Goods and Services Tax. The paper focuses on three neglected aspects of climate change taxation discussion to date: how much tax revenue is likely to be raised, and the administrative and compliance costs of an emissions trading scheme, with particular reference to Australia. In discussing these issues, the paper draws upon selected and relevant international experience, particularly the European Union emissions trading scheme. The challenges of an emissions trading scheme, including integration with the existing tax system, particularly in an Australian context, are also discussed. The paper concludes by emphasising the key challenges and issues facing this ‘ultimate externality’ debate, particularly from a taxation policy perspective.

Over the past thirty years, essentially since the First World Climate Change Conference, there has been a considerable amount of scientific research and debate about global warming and climate change. More recently much economic and often high-profile analysis e.g. Stern (2007), Garnaut, 2008a and Garnaut, 2008b has stressed the economic importance of action rather than inaction in an extremely complex international policy environment. However, putting a price on carbon is not new. The first carbon tax1 was introduced in Finland in 1990, with some other Western European countries following in subsequent years. The most recent carbon tax was introduced in July 2008 by the state jurisdiction of British Columbia, Canada. The European carbon taxes have produced a reasonably robust literature not only on the mechanics and technicalities of these taxes per se, including revenue yield, but also on economic incidence upon households and ensuing compensation mechanisms. There is also a strong literature on climate change and carbon reduction in the European Union (EU), especially through the first phase of its emissions trading scheme (ETS) that commenced in 2005 and closed at year-end 2007. Unfortunately, there is very little literature on and estimates of three of the main aspects of this paper, namely the revenue arising from an ETS, administrative costs, and especially compliance costs. Whilst the carbon pricing aspects overall of an ETS can be described as being in their infancy, discussion of administrative and compliance costs could best be described as embryonic! Thus, the estimates given later in this paper should be seen as crude orders of magnitude and starting points rather than robust estimates. Before proceeding further, it is important to discuss key terminology. Researchers in the energy field often use the term transaction costs, whereas the equivalent term used in the tax literature is operating costs. These are composed of administrative costs, or all those costs incurred by the Government in implementing and collecting a tax, and compliance costs, or all those costs imposed upon taxpayers (the private sector) over and above the tax revenue itself. Compliance costs may be expressed in gross or net terms. The former reflect the costs to society, whereas the latter reflect the real cost to the taxpayer. Net costs are gross costs minus offsets, namely cash flow benefits, tax deductibility and managerial benefits (of particular relevance to small business). This paper focuses upon gross costs and does not consider any offsetting benefits. Psychological costs are recognised but also disregarded here. The tax compliance costs field distinguishes between start-up (transitional) compliance costs and recurrent (ongoing) compliance costs. In the context of an ETS, this distinction is extremely important as an ETS may be fully phased-in over a long period, perhaps a decade or so. The same distinction between start-up and recurrent costs can also be applied to ETS administrative costs, at least in theory. In this paper, the term ETS is generally used in preference to particular terms used by specific countries e.g. carbon pollution reduction scheme (CPRS) in Australia. For the purposes of this paper, an ETS and its ensuing revenue and operating costs is assumed to be equivalent to that of a carbon tax although the mechanisms are completely different, as discussed later. It is worth noting that the term regulation refers to command and control e.g. outright banning of or restrictions on an activity. The term regulatory compliance costs generally applies to and distinguishes non-tax costs compared to the specific term tax compliance costs that are used here. It is assumed that all compliance costs relating to an ETS come under the term tax compliance costs. This paper is organised as follows. The next section introduces the theoretical issues and section three analyzes the optimal level of pollution and compares carbon taxation with tradable permits. Section 4 discusses the challenges for an ETS, focusing on Australia although some of the issues would be applicable to other countries. The fifth section makes an analysis of likely revenue arising from an Australian ETS and discusses principles of its allocation. Administrative costs and compliance costs of an ETS are discussed in sections six and seven, respectively. The final section makes some concluding comments.