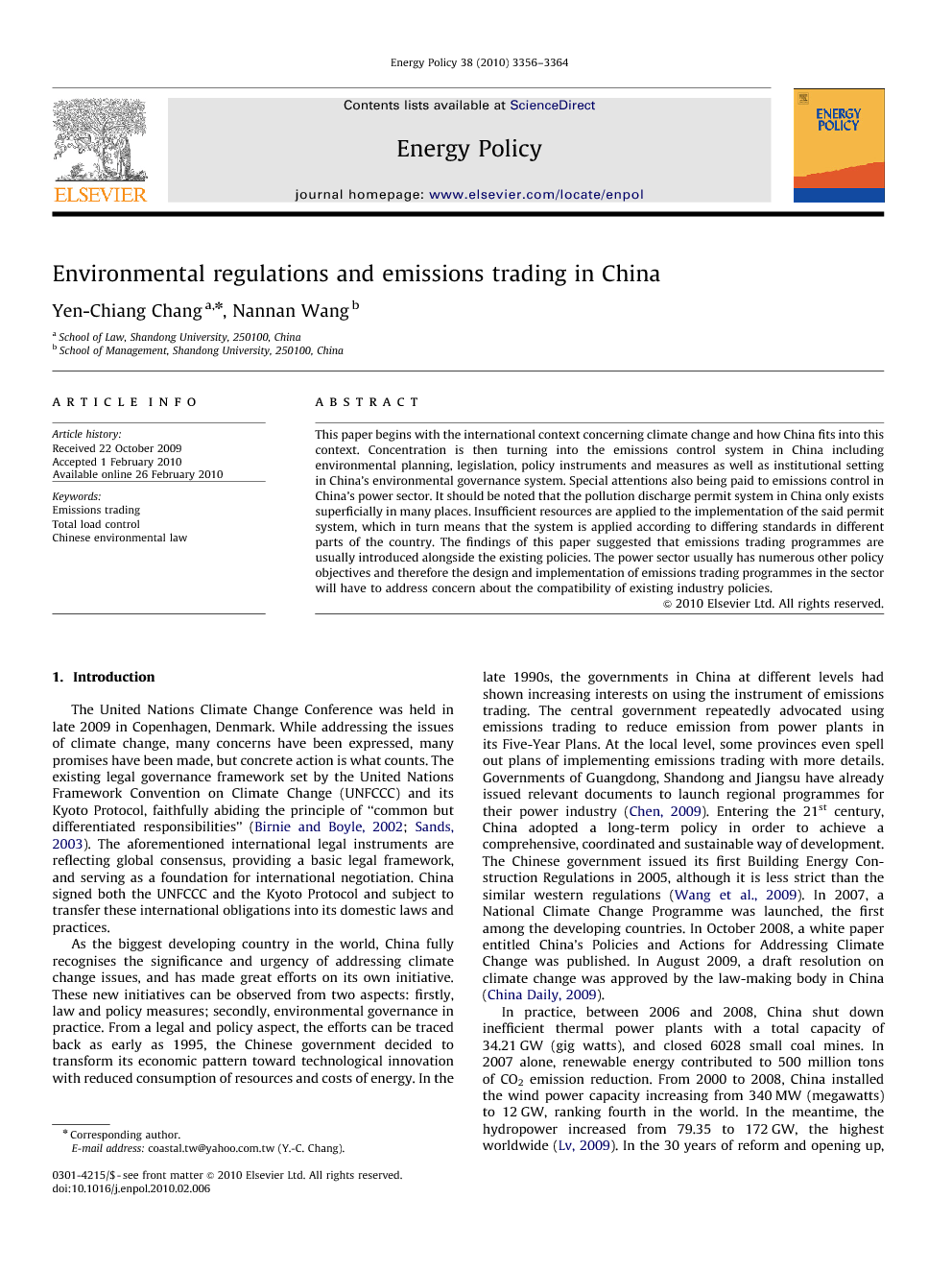 This paper begins with the international context concerning climate change and how China fits into this context. Concentration is then turning into the emissions control system in China including environmental planning, legislation, policy instruments and measures as well as institutional setting in China’s environmental governance system. Special attentions also being paid to emissions control in China’s power sector. It should be noted that the pollution discharge permit system in China only exists superficially in many places. Insufficient resources are applied to the implementation of the said permit system, which in turn means that the system is applied according to differing standards in different parts of the country. The findings of this paper suggested that emissions trading programmes are usually introduced alongside the existing policies. The power sector usually has numerous other policy objectives and therefore the design and implementation of emissions trading programmes in the sector will have to address concern about the compatibility of existing industry policies.

The United Nations Climate Change Conference was held in late 2009 in Copenhagen, Denmark. While addressing the issues of climate change, many concerns have been expressed, many promises have been made, but concrete action is what counts. The existing legal governance framework set by the United Nations Framework Convention on Climate Change (UNFCCC) and its Kyoto Protocol, faithfully abiding the principle of “common but differentiated responsibilities” (Birnie and Boyle, 2002; Sands, 2003). The aforementioned international legal instruments are reflecting global consensus, providing a basic legal framework, and serving as a foundation for international negotiation. China signed both the UNFCCC and the Kyoto Protocol and subject to transfer these international obligations into its domestic laws and practices. As the biggest developing country in the world, China fully recognises the significance and urgency of addressing climate change issues, and has made great efforts on its own initiative. These new initiatives can be observed from two aspects: firstly, law and policy measures; secondly, environmental governance in practice. From a legal and policy aspect, the efforts can be traced back as early as 1995, the Chinese government decided to transform its economic pattern toward technological innovation with reduced consumption of resources and costs of energy. In the late 1990s, the governments in China at different levels had shown increasing interests on using the instrument of emissions trading. The central government repeatedly advocated using emissions trading to reduce emission from power plants in its Five-Year Plans. At the local level, some provinces even spell out plans of implementing emissions trading with more details. Governments of Guangdong, Shandong and Jiangsu have already issued relevant documents to launch regional programmes for their power industry (Chen, 2009). Entering the 21st century, China adopted a long-term policy in order to achieve a comprehensive, coordinated and sustainable way of development. The Chinese government issued its first Building Energy Construction Regulations in 2005, although it is less strict than the similar western regulations (Wang et al., 2009). In 2007, a National Climate Change Programme was launched, the first among the developing countries. In October 2008, a white paper entitled China’s Policies and Actions for Addressing Climate Change was published. In August 2009, a draft resolution on climate change was approved by the law-making body in China (China Daily, 2009). In practice, between 2006 and 2008, China shut down inefficient thermal power plants with a total capacity of 34.21 GW (gig watts), and closed 6028 small coal mines. In 2007 alone, renewable energy contributed to 500 million tons of CO2 emission reduction. From 2000 to 2008, China installed the wind power capacity increasing from 340 MW (megawatts) to 12 GW, ranking fourth in the world. In the meantime, the hydropower increased from 79.35 to 172 GW, the highest worldwide (Lv, 2009). In the 30 years of reform and opening up, China’s GDP hit an annual growth of 9.8 percent, while energy consumption per unit of GDP decreased by 4 percent per year. Even during the recent global economic crisis, the government demonstrated its firm determinations to address the climate change issues. For example, the Chinese government has recently launched a 4-trillion-yuan ($586 billion) financial stimulus package, among it 350 billion yuan was channelled into environment and climate-related industries (China Daily, 2009). In addition to the above facts, the concept of emissions trading is relatively new in China and the implementation of emissions trading programmes is still at an experimental stage. However, the legal system to control emissions from the power sector has long existed. Any new policy instrument needs to operate within the existing system, ultimately becoming a part of and functioning together with its other components. The case of emissions trading is thus no exception in this regard. China’s environmental law system was born out of socialist planning, and had evolved in the course of China’s transition to a market-oriented economy. The system is now vigorously developed, accommodating multiple layers of law-making bodies and executive agencies as well as policy instruments and measures of many kinds (Zhang and Wen, 2008). Moreover, the Chinese government as well as researchers and practitioners in the industry have already made considerable efforts to study the mechanism of emissions trading and to devise appropriate mechanisms to make it work in China. In fact, several pilot projects were implemented in the past 10 years or more, and some of the existing policies, such as the “Total Loading Control” framework, have laid a solid policy foundation for the introduction of emissions trading in China. All these elements comprise the background to the introduction of emissions trading in China’s power industry and are thus reviewed in depth in this paper. The paper starts with an introduction on emissions control system in China including environmental planning, legislation, policy instruments and measures as well as institutional setting in China’s environmental governance system. Special attentions also being paid to emissions control in China’s power sector. The paper then reviews the efforts that the Chinese government has made to date to introduce emissions trading in China. Emissions trading policies, regulations, pilot programmes and their practices are also examined. The last section of this paper discussed what lessons can be learnt from the efforts of introducing emissions trading in China. All of the aforementioned will be detailed in the following part.

China signed both the UNFCCC and its Kyoto Protocol and is subject to transform these international legal obligations into its domestic laws and practice. However, China is currently taking a more regional approach to tackle the problems of SO 2 emissions only, leaving aside the efforts of greenhouse gases and carbon dioxide. The findings of this paper suggested that the pollution discharge permit system in China only exists superficially in many places. Insufficient resources are applied to the implementation of this permit system, which in turn means that the system is applied according to differing standards in different parts of the country. The applications for permits are rarely denied or apparently, even granted with some modification. As a result, the permit system serves to excuse existing patterns of pollution, rather than to limit future pollution discharge. Based on the above discussion, some internal changes need to be considered. Firstly, China needs adequate national legislation to unify environmental standards. Secondly, it needs to make appropriate investment in legal enforcement.It is also found that emissions trading programmes are usually introduced alongside the existing policies, such as environmental taxes, mechanisms for renewable electricity and policies to promote energy efficiency. The emissions trading programmes ought to help to deliver the objectives of these policies. The power sector usually has numerous other policy objectives and therefore the design and implementation of the programmes in the sector will have to address the concern about the compatibility of certain industry policies. However, there is a risk that China follows the lead given by other countries that have evolved ineffective regulatory systems. China could instead lead the world by doing its own thinking and leapfrogging old ways.