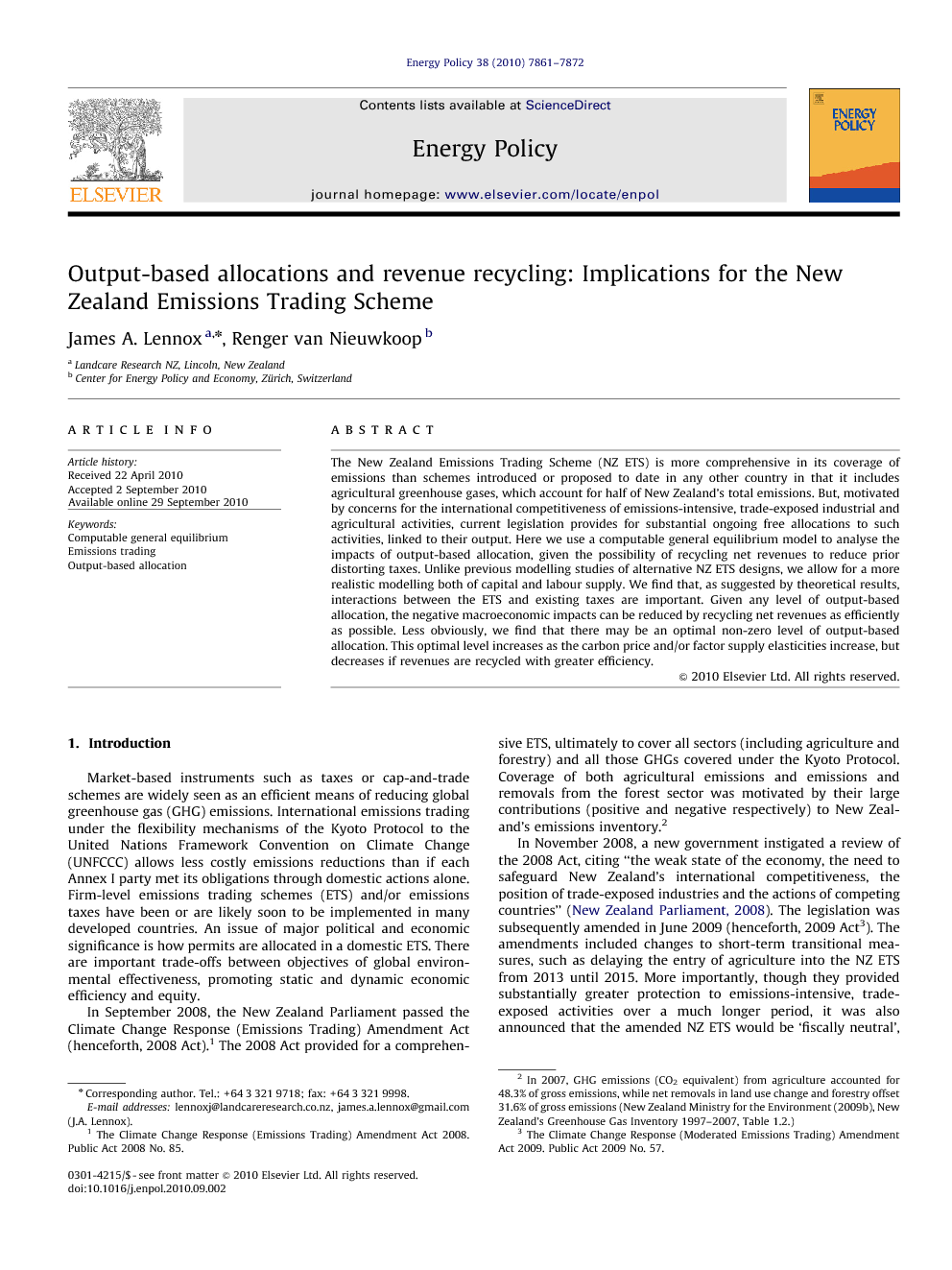 The New Zealand Emissions Trading Scheme (NZ ETS) is more comprehensive in its coverage of emissions than schemes introduced or proposed to date in any other country in that it includes agricultural greenhouse gases, which account for half of New Zealand’s total emissions. But, motivated by concerns for the international competitiveness of emissions-intensive, trade-exposed industrial and agricultural activities, current legislation provides for substantial ongoing free allocations to such activities, linked to their output. Here we use a computable general equilibrium model to analyse the impacts of output-based allocation, given the possibility of recycling net revenues to reduce prior distorting taxes. Unlike previous modelling studies of alternative NZ ETS designs, we allow for a more realistic modelling both of capital and labour supply. We find that, as suggested by theoretical results, interactions between the ETS and existing taxes are important. Given any level of output-based allocation, the negative macroeconomic impacts can be reduced by recycling net revenues as efficiently as possible. Less obviously, we find that there may be an optimal non-zero level of output-based allocation. This optimal level increases as the carbon price and/or factor supply elasticities increase, but decreases if revenues are recycled with greater efficiency.

In this study, we have shown how different levels of output- based allocation and different methods of recycling any net revenues can significantly alter the macroeconomic impacts of an ETS in New Zealand, which is open to international permit trade.Our model differs from those used in previous studies of the New Zealand ETS in that it allows not only for the long-run elastic supply of capital but also for a labour–leisure choice of house- holds, making long-run aggregate labour supply responsive to changes in the real wage. Moreover, by considering the rate of free allocation as a continuous policy variable, we show more clearly the effects of output-based allocation to emissions-intensive trade-exposed industries and the interactions with existing taxes. Our results suggest that at moderate to high carbon prices, revenues from pre-existing taxes may be significantly eroded. Consequently, a significant number of permits backed by the government’s initial endowment of AAUs must be auctioned to avoid negative fiscal impacts. If additional permits are auctioned rather than freely allocated, it is important that the resulting net revenues are recycled as efficiently as possible – namely to reduce the most distorting taxes – if macroeconomic impacts are to be minimised. With a fixed carbon price, output-based allocation is very effective in increasing aggregate output and hence demands for labour and capital. However, it also reduces domestic mitigation and thus increases the cost of purchasing emissions permits abroad to meet a given emissions reduction obligation. Thisnegatively affects aggregate income and although reducing erosion of tax revenues, reduces net revenues available for recycling. Recycling revenue to reduce distorting income tax wedges increases factor supply and consequently output and factor incomes. It has negligible effects on domestic emissions. The positive effect on factor incomes reduces revenue erosion, creasing a positive feedback effect, i.e. the marginal efficiency of revenue recycling increases with the level of revenue recycling. Considering a wide range of factor supply elasticities, we find that output-based allocation tends to be most effective in preserving aggregate output. However, impacts on aggregate income are generally minimised by low or zero rates of output- based allocation. Low rather than zero rates of output-based allocation yield smaller impacts on aggregate income if factor supplies are relatively elastic. This may be explained by the importance of negative interactions between carbon prices and pre-existing taxes. Such optimal rates of free allocation are higher if revenue is recycled less efficiently. However, we find no case in which it is beneficial to raise income taxes to further increase the rate of output-based allocation. For a given carbon price, changing the QELRO has nearly linear impacts on output and income. However, the method of revenuerecycling significantly alters the marginal benefit to New Zealand of relaxing its obligation. It is approximately three times as great if net revenues are recycled to capital rather than being returned lump sum. This result is largely independent of the rate of output-based allocation. Marginal impacts on GDP, labour supply and the capital stock are actually slightly less than zero with lump sum recycling. We have not estimated net impacts of the policies on global emissions. This would require accounting for at least (1) leakage of emissions associated with lost output in New Zealand and (2) leakage of emissions associated with foreign emissions permits used to meet the QELRO. Other things being equal, if the latter effect is larger than the former, preserving domestic output will come at the cost of environmental effectiveness. Consideration of the economic benefits of output-based allocation as described above should therefore be tempered by the possibility thatoutput-based allocations may in some cases reduce environmen- tal effectiveness. Our results are consistent with the standard economic theory on optimal taxation and the more specific theoretical results concerning double dividends and environmental taxation in a second-best setting. However, in the protracted and often heated public and political debates over the introduction of emissions trading schemes in New Zealand, these considerations have been peculiarly absent. This is all the more surprising, given that the New Zealand government is conducting a wide-ranging review of taxation with a view to significant reforms that would boost economic productivity and growth. A similar situation can be observed in Australia. From this perspective, our modelling can only be considered a preliminary indication of what is possible. More detailed modelling of labour supply, taxes and impacts ondifferent categories of households is needed. Such modelling should, however, have regard to general equilibrium effects, such as that relating to labour productivity noted above. The policies modelled here do not correspond specifically to the current NZ ETS. Limitations of the model have precluded our modelling the response of the forestry sector under the NZ ETS. Furthermore, we have modelled a rather generous eligibility for free allocation, while eligibility rules in the NZ ETS have still to be determined and seem likely to be more restrictive. Nevertheless, eligibility will have to be very much narrower than modelled here if the high rates of intensity-based allocation under the NZ ETS (90% of 2005 emissions phased out at 1.3% p.a.) are to be at all consistent with our findings on the levels of output-based allocation that are optimal from a macroeconomic perspective.