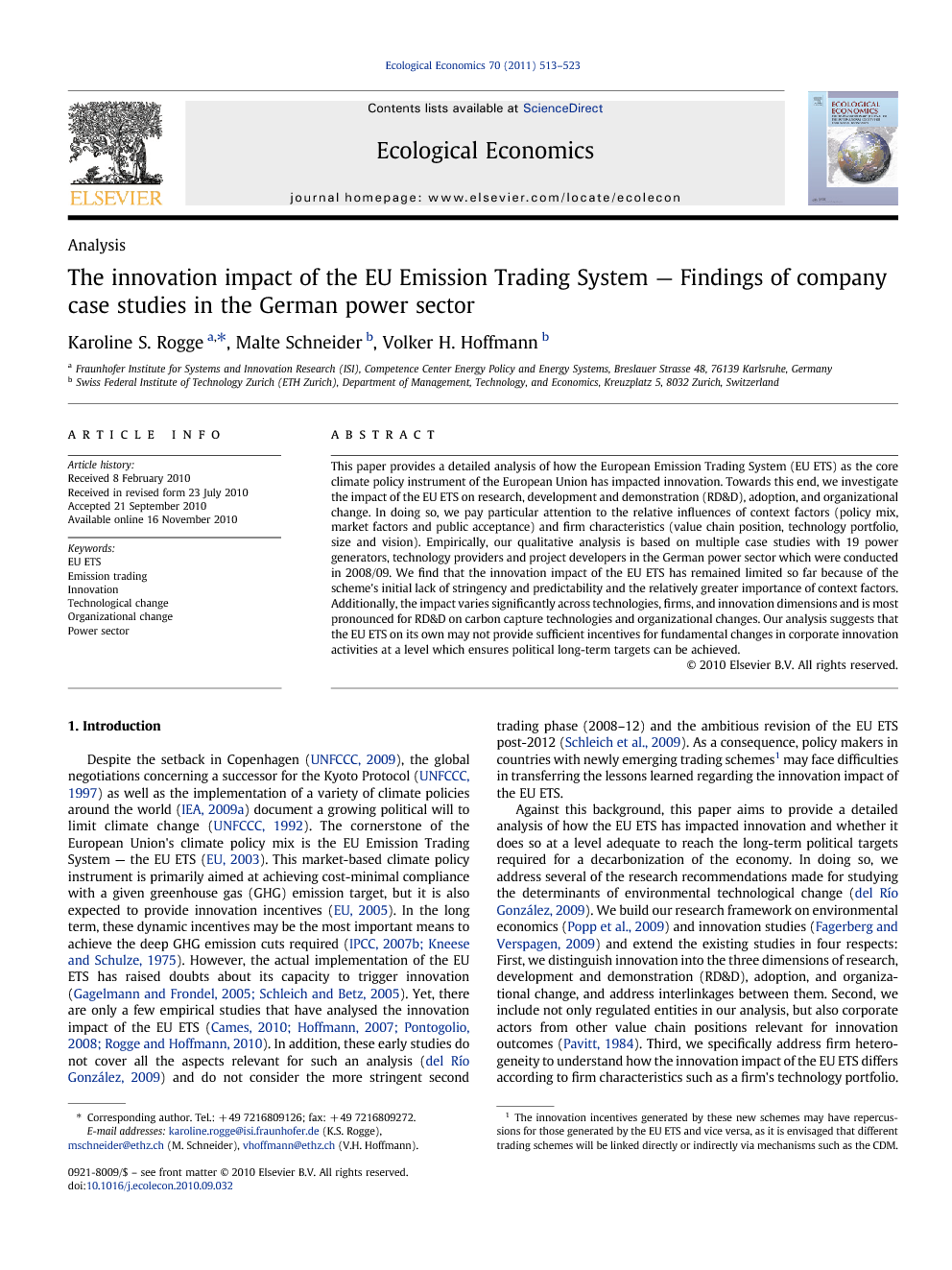 This paper provides a detailed analysis of how the European Emission Trading System (EU ETS) as the core climate policy instrument of the European Union has impacted innovation. Towards this end, we investigate the impact of the EU ETS on research, development and demonstration (RD&D), adoption, and organizational change. In doing so, we pay particular attention to the relative influences of context factors (policy mix, market factors and public acceptance) and firm characteristics (value chain position, technology portfolio, size and vision). Empirically, our qualitative analysis is based on multiple case studies with 19 power generators, technology providers and project developers in the German power sector which were conducted in 2008/09. We find that the innovation impact of the EU ETS has remained limited so far because of the scheme's initial lack of stringency and predictability and the relatively greater importance of context factors. Additionally, the impact varies significantly across technologies, firms, and innovation dimensions and is most pronounced for RD&D on carbon capture technologies and organizational changes. Our analysis suggests that the EU ETS on its own may not provide sufficient incentives for fundamental changes in corporate innovation activities at a level which ensures political long-term targets can be achieved.

Despite the setback in Copenhagen (UNFCCC, 2009), the global negotiations concerning a successor for the Kyoto Protocol (UNFCCC, 1997) as well as the implementation of a variety of climate policies around the world (IEA, 2009a) document a growing political will to limit climate change (UNFCCC, 1992). The cornerstone of the European Union's climate policy mix is the EU Emission Trading System — the EU ETS (EU, 2003). This market-based climate policy instrument is primarily aimed at achieving cost-minimal compliance with a given greenhouse gas (GHG) emission target, but it is also expected to provide innovation incentives (EU, 2005). In the long term, these dynamic incentives may be the most important means to achieve the deep GHG emission cuts required (IPCC, 2007b and Kneese and Schulze, 1975). However, the actual implementation of the EU ETS has raised doubts about its capacity to trigger innovation (Gagelmann and Frondel, 2005 and Schleich and Betz, 2005). Yet, there are only a few empirical studies that have analysed the innovation impact of the EU ETS (Cames, 2010, Hoffmann, 2007, Pontogolio, 2008 and Rogge and Hoffmann, 2010). In addition, these early studies do not cover all the aspects relevant for such an analysis (del Río González, 2009) and do not consider the more stringent second trading phase (2008–12) and the ambitious revision of the EU ETS post-2012 (Schleich et al., 2009). As a consequence, policy makers in countries with newly emerging trading schemes1 may face difficulties in transferring the lessons learned regarding the innovation impact of the EU ETS. Against this background, this paper aims to provide a detailed analysis of how the EU ETS has impacted innovation and whether it does so at a level adequate to reach the long-term political targets required for a decarbonization of the economy. In doing so, we address several of the research recommendations made for studying the determinants of environmental technological change (del Río González, 2009). We build our research framework on environmental economics (Popp et al., 2009) and innovation studies (Fagerberg and Verspagen, 2009) and extend the existing studies in four respects: First, we distinguish innovation into the three dimensions of research, development and demonstration (RD&D), adoption, and organizational change, and address interlinkages between them. Second, we include not only regulated entities in our analysis, but also corporate actors from other value chain positions relevant for innovation outcomes (Pavitt, 1984). Third, we specifically address firm heterogeneity to understand how the innovation impact of the EU ETS differs according to firm characteristics such as a firm's technology portfolio. Fourth, we also explicitly address the role of context factors in the business environment to account for the multitude of determinants of corporate innovation activities (see e.g. del Río González, 2005, Horbach, 2008 and OECD, 2007). We limit our study to the power sector because it has by far the largest share of CO2 emissions covered by the scheme (71.3% in 2008) (EU, 2010).2 The power sector is also the largest contributor to CO2 emissions in the rest of the world and thus plays a key role in future emission reductions and innovation (IEA, 2009b). Furthermore, we confine our analysis to Germany as this country exhibits a fairly diversified mix of power generation technologies and is characterised by significant capacity renewal needs (IEA, 2007 and Platts, 2008).3 We chose a qualitative methodological approach based on multiple company case studies because we aim at generating insights into the complex nature of corporate innovation decision making and how this is affected by the EU ETS, thereby contributing to the identification of causal links (Yin, 2002). In-depth interviews with company representatives constitute the prime data source which was supplemented by archival data. The paper is organized as follows. Section 2 presents a brief overview of the literature on the EU ETS and innovation. 3 and 4 introduce our research framework and the case study methodology, respectively. Section 5 presents our findings on the so far rather limited impact of the EU ETS on RD&D, adoption and organizational change. Finally, Section 6 discusses these findings before Section 7 concludes with research and policy recommendations.

We conclude that, in principle, the regulatory demand-pull of the EU ETSdoeswork,meaningthatthetradingschemecontributestoachange incorporate climate innovationactivities across major parts of the value chain. We thus con fi rm that due to its establishment of a carbon price, the EU ETS can serve as a basic element in a climate policy portfolio ( Fischer and Newell, 2008 ). However, while the introduction of full auctioning will generate undistorted carbon signals and the EU ETS' phase 3 cap will signi fi cantly contribute to the EU's efforts to reach its 2020 targets, the EU ETS by itself is highly unlikely to lead to RD&D and adoption decisions in line with reaching the EU's proposed 2050 targets. Two examples supporting this are the limited impact of the EU ETS on renewables and demand-side energy savings. Here, complementary policies are needed to create attractive markets for renewables, particularly for technologies not yet competitive with conventional power generation technologies and to assist companies in creating viable business models promoting reductions in power consumption. 14 Moregenerallyspeaking,thereisaneedtocomplementthepurecarbon priceincentiveswithlong-termscenario-buildingeffortsinordertostart changing the established mindsets of incumbents and create new corporate visions of the future. Furthermore, we argue that through the changes in corporate routines triggered by the EU ETS, companies in the power sector are better prepared for a tightening of the climate policy mix in line withthe 2 °C target ( UNFCCC, 2009 ). Nevertheless, while large incumbents are fi nally embracing the growing renewables market and thereby facing an internal clash of cultures, the majority of their investment is still earmarked for conventional technologies. It is therefore ques- tionable whether the big players are moving quickly and proactively enough to become agents of change for the needed decarbonization of the power sector. Thus, it seems essential to keep markets open and attract new dynamic and innovative entrants. Finally, if the EU ETS's stringency were further tightened to re fl ect the required deep emission cuts as indicated by climate science ( IPCC, 2007b ), we expect its innovation impact would increase. In such circumstances, the EU ETS as the cornerstone of EU climate policy and complemented by other policiesmay ultimatelylive up to its potential of guiding the decarbonization of the European power sector. As stressed before, a precondition for this may be the passing of an ambitious and credible long-term global climate treaty because cap- and-trade can be understood as the operationalization of these overarching mitigation targets. Such a treaty would increase the overall predictability for innovators. Furthermore, as technology providers innovate for the global market, such an international agreement should coverallthemajorpowermarketsastheseotherregionswouldthenbe likely to follow suit in establishing markets for CO 2 reductions and thus raise the gains from low-carbon RD&D activities. Our results on the innovation impact of the EU ETS shed some light on what may be expected from the emission trading schemes being negotiated in the rest of the world. Most prominently, the trading scheme proposals being developed in the US — while including some commendable features such as the foreseen long-term reduction path and high level of auctioning in the Waxman – Markey bill ( ACES Act, 2009 ) — are likely to have a relatively moderate impact on corporate climate innovation activities in the power sector. A key reason for this is the typical in fl ow of CO 2 price reducing offset credits which tends to be too lenient to ultimately generate a carbon market with a decisive impact on adoption and RD&D decisions in line with the called for decarbonizing of the US power sector. Similarly, based on our analysis of the EU ETS, it is also unlikely that the proposed Australian carbon pollution reduction scheme (CPRS Bill, 2009 ) will be suf fi cient to promote technological change at the level required for a low carbon transformation of the Australian power sector due to the combination of a potentially lenient target, unlimited offsetting and a rather low price cap. Our study is not without limitations, however, and thus warrants future research. As we focused our analysis on the power sector, other studies will have to identify whether and how the innovation impact of the EU ETS differs across sectors. Additionally, all of our case companies were based in Germany – though often with international operations – so it might be useful to investigate whether companies with other home markets have reacted similarly to the EU ETS. Moreover, of the actors relevant for innovation in the power sector, we onlyincluded power generators, technologyproviders, andproject developers. While this value chain approach goes well beyond the standard of addressing the regulated entities only, the analysis could be extended to other actors, particularly to fi nal power consumers, start-ups, and venture capitalists. Finally, while our qualitative approach enabled us to study the complex causal links and feedback loops of innovation processes in the power sector and how the EU ETS is impacting them, innovation surveys allowing for statistical general- isations should complement this analysis.