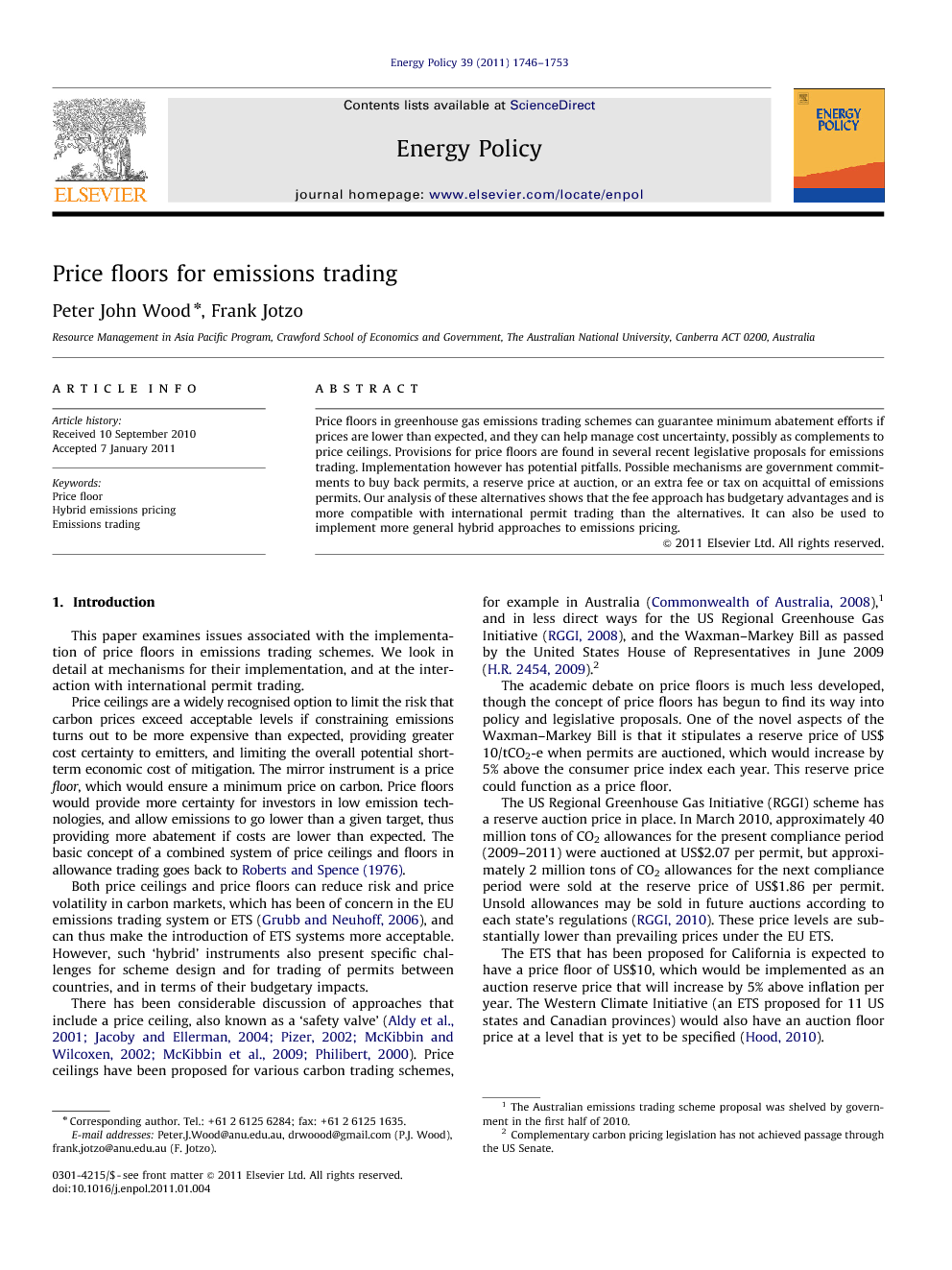 Price floors in greenhouse gas emissions trading schemes can guarantee minimum abatement efforts if prices are lower than expected, and they can help manage cost uncertainty, possibly as complements to price ceilings. Provisions for price floors are found in several recent legislative proposals for emissions trading. Implementation however has potential pitfalls. Possible mechanisms are government commitments to buy back permits, a reserve price at auction, or an extra fee or tax on acquittal of emissions permits. Our analysis of these alternatives shows that the fee approach has budgetary advantages and is more compatible with international permit trading than the alternatives. It can also be used to implement more general hybrid approaches to emissions pricing.

This paper examines issues associated with the implementation of price floors in emissions trading schemes. We look in detail at mechanisms for their implementation, and at the interaction with international permit trading. Price ceilings are a widely recognised option to limit the risk that carbon prices exceed acceptable levels if constraining emissions turns out to be more expensive than expected, providing greater cost certainty to emitters, and limiting the overall potential short-term economic cost of mitigation. The mirror instrument is a price floor, which would ensure a minimum price on carbon. Price floors would provide more certainty for investors in low emission technologies, and allow emissions to go lower than a given target, thus providing more abatement if costs are lower than expected. The basic concept of a combined system of price ceilings and floors in allowance trading goes back to Roberts and Spence (1976). Both price ceilings and price floors can reduce risk and price volatility in carbon markets, which has been of concern in the EU emissions trading system or ETS (Grubb and Neuhoff, 2006), and can thus make the introduction of ETS systems more acceptable. However, such ‘hybrid’ instruments also present specific challenges for scheme design and for trading of permits between countries, and in terms of their budgetary impacts. There has been considerable discussion of approaches that include a price ceiling, also known as a ‘safety valve’ (Aldy et al., 2001, Jacoby and Ellerman, 2004, Pizer, 2002, McKibbin and Wilcoxen, 2002, McKibbin et al., 2009 and Philibert, 2000). Price ceilings have been proposed for various carbon trading schemes, for example in Australia (Commonwealth of Australia, 2008),1 and in less direct ways for the US Regional Greenhouse Gas Initiative (RGGI, 2008), and the Waxman–Markey Bill as passed by the United States House of Representatives in June 2009 (H.R. 2454, 2009).2 The academic debate on price floors is much less developed, though the concept of price floors has begun to find its way into policy and legislative proposals. One of the novel aspects of the Waxman–Markey Bill is that it stipulates a reserve price of US$10/tCO2-e when permits are auctioned, which would increase by 5% above the consumer price index each year. This reserve price could function as a price floor. The US Regional Greenhouse Gas Initiative (RGGI) scheme has a reserve auction price in place. In March 2010, approximately 40 million tons of CO2 allowances for the present compliance period (2009–2011) were auctioned at US$2.07 per permit, but approximately 2 million tons of CO2 allowances for the next compliance period were sold at the reserve price of US$1.86 per permit. Unsold allowances may be sold in future auctions according to each state's regulations (RGGI, 2010). These price levels are substantially lower than prevailing prices under the EU ETS. The ETS that has been proposed for California is expected to have a price floor of US$10, which would be implemented as an auction reserve price that will increase by 5% above inflation per year. The Western Climate Initiative (an ETS proposed for 11 US states and Canadian provinces) would also have an auction floor price at a level that is yet to be specified (Hood, 2010). Calls in early 2009 for a price floor to be introduced to the EU emissions trading scheme, via an auction reserve price, were rejected by the European Commission. The European Commission claimed that “a floor price may unduly interfere with the market” (Gardner, 2009). This argument seems to overlook that permit markets are entirely the product of government regulation in the first place—introducing a feature like a price floor simply means adopting a different design that will result in a different market outcome. The argument also runs counter to stated EU interests to achieve ambitious climate mitigation outcomes. Provisions for an effective floor price are under discussion in the United Kingdom (Rebuilding Security, 2010). By contrast, the ETS earlier proposed in Australia did not include price floor provisions. Analogous policies have also been implemented for renewable energy—Belgium has a minimum price for renewable energy certificates (Belgium Renewable Energy Factsheet, 2007). The next section reviews how a floor price in an emissions trading scheme could interact with various different policy objectives. In Section 3, we compare the different approaches for implementing a price floor. In Section 4, we examine in detail the mechanism where firms pay a tax or extra fee as well as buy permits; and discuss international permit trading, budgetary implications, and political economy considerations. Compared to the alternatives, this mechanism has budgetary advantages and is compatible with international permit trading. In Section 5, we examine how similar mechanisms could be used to implement more general hybrid approaches for putting a price on emissions. One such approach is to use an ‘allowance reserve’, which is similar to a price ceiling, but where the total number of permits remains limited. Section 6 concludes.

Price floors in emissions trading systems can reduce excessive price volatility, and provide better management of cost uncertaintyin the event of lower than expected abatement costs, which in turn improves predictability of return s and increases expected returns for low-emissions investments. Price floors are natural complements to price ceilings, which limit price variability at the opposite end of the scale and reduce the incentives for low-carbon investments. Down- sides include greater complexity, and the potential to exacerbate inefficiencies in global abatement through differences in effective emissions prices between countrie s, if price floors are implemented unevenly. Price floors need to be carefully designed to avoid budgetary liabilities, and to avoid barriers to international trade in permits.The most direct approach of a government commitment to buy back permits at a threshold price is unlikely to be viable, especially in the context of international permit trading, because it implies large contingent budgetary liabilities. An alternative approach of a minimum reserve price for auctioned permits, as pursued in the Waxman–Markey Bill, RGGI, and as was earlier considered by the European Union, could yield the desired effect, but only if the share of auctioning is large. An alternative, and possibly superior option is to require the separate payment of a fee or tax on domestic emissions, in addition to cap-and-trade. This approach carries desirable budgetaryimplications for national governments, and is fully compatible with international permit trading. In fact, this is precisely what govern- ments do where they have a carbon tax of levy in addition to emissions trading. The fee or tax could be either fixed or variable, giving different results in permit markets and for government revenue, and posing different questions for implementation. A variable fee set equal to the difference between the market price for permits and the floor price allows the exact implementation of a floor price but may pose difficulties in defining the market price, and fiscal yields are difficult to predict. A fixed fee or tax by contrast will deliver predictable revenue streams, but raises the effective carbon price at any level of the traded permit price, which may not be desired by governments. The impact of an additional fee or tax on the effective domestic carbon price and domestic abatement depends on whether permits are traded internationally or not. In a purely domestic cap-and-trade scheme without international linkage, they will simply result in lower permit prices. With international emissions trading, they will result in a higher effective domestic permit price and more abatement in the country in question. The extra fee approach can also be used to implement allowance reserves, as well as more complex hybrid mechanisms. All in all, price floors could fulfil an important supporting role in ensuring effective and efficient climate change mitigation, they can be implemented without compromising vital aspects of emis- sions trading, and their budgetary properties might be attractive to governments. A final consideration relates to the political economy of carbon pricing. Recent failures and delays to legislate emissions trading in the United States and Australia can in part be traced to the influence of lobbying by high-emitting industries and fears about the risk of high economic cost of climate change mitigation. While price ceilings can help address these concerns, price floors address the converse risk of lower than expected mitigation effort, and should thus find the support of industries that own low-emitting technologies and be able to alleviate concerns by environmental lobbies. These lobbies have, however, been shown to be generally much less influential in policy formulation; hence, price floors may still have a rocky road ahead before implementation.