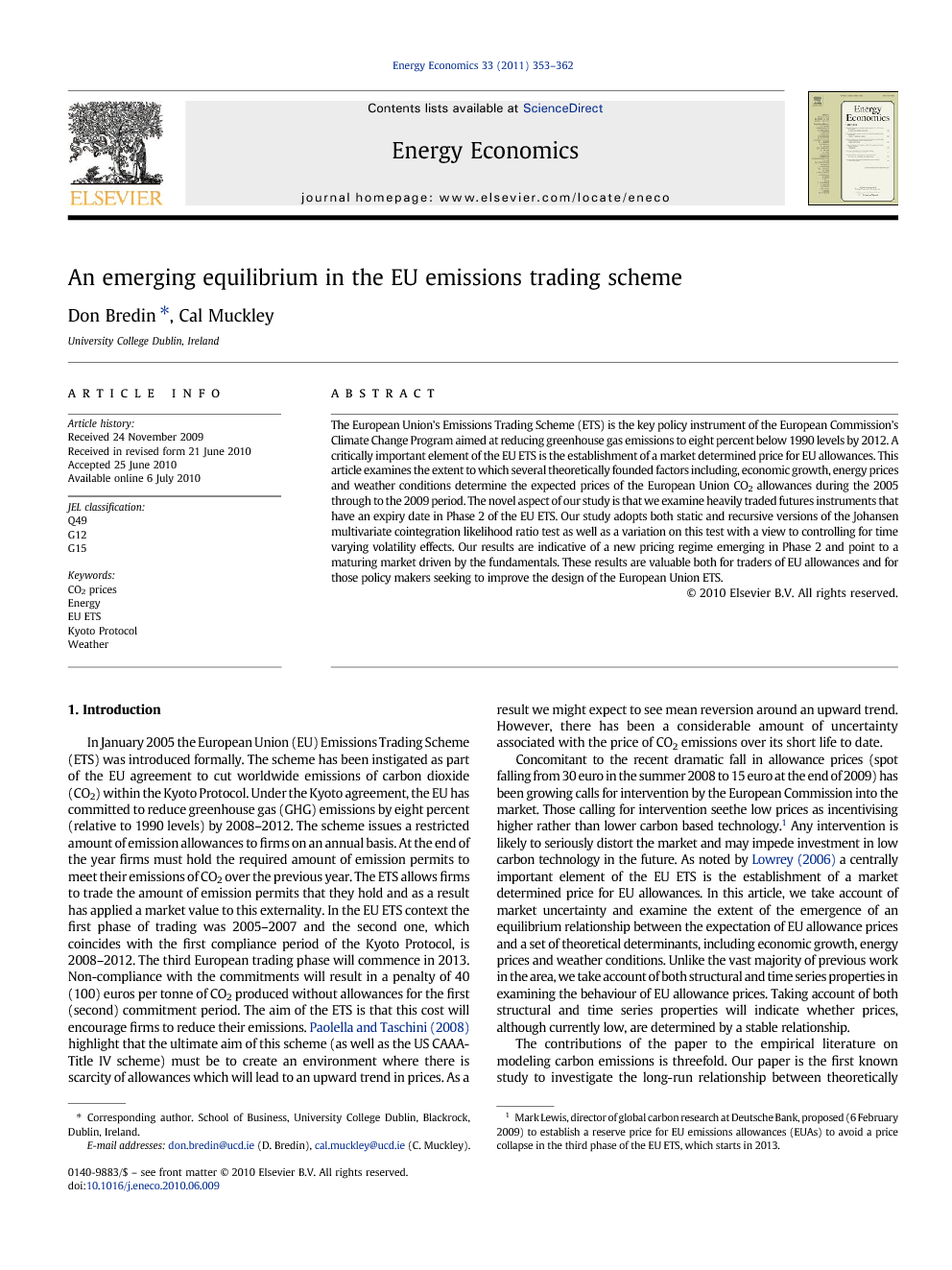 The European Union's Emissions Trading Scheme (ETS) is the key policy instrument of the European Commission's Climate Change Program aimed at reducing greenhouse gas emissions to eight percent below 1990 levels by 2012. A critically important element of the EU ETS is the establishment of a market determined price for EU allowances. This article examines the extent to which several theoretically founded factors including, economic growth, energy prices and weather conditions determine the expected prices of the European Union CO2 allowances during the 2005 through to the 2009 period. The novel aspect of our study is that we examine heavily traded futures instruments that have an expiry date in Phase 2 of the EU ETS. Our study adopts both static and recursive versions of the Johansen multivariate cointegration likelihood ratio test as well as a variation on this test with a view to controlling for time varying volatility effects. Our results are indicative of a new pricing regime emerging in Phase 2 and point to a maturing market driven by the fundamentals. These results are valuable both for traders of EU allowances and for those policy makers seeking to improve the design of the European Union ETS.

In January 2005 the European Union (EU) Emissions Trading Scheme (ETS) was introduced formally. The scheme has been instigated as part of the EU agreement to cut worldwide emissions of carbon dioxide (CO2) within the Kyoto Protocol. Under the Kyoto agreement, the EU has committed to reduce greenhouse gas (GHG) emissions by eight percent (relative to 1990 levels) by 2008–2012. The scheme issues a restricted amount of emission allowances to firms on an annual basis. At the end of the year firms must hold the required amount of emission permits to meet their emissions of CO2 over the previous year. The ETS allows firms to trade the amount of emission permits that they hold and as a result has applied a market value to this externality. In the EU ETS context the first phase of trading was 2005–2007 and the second one, which coincides with the first compliance period of the Kyoto Protocol, is 2008–2012. The third European trading phase will commence in 2013. Non-compliance with the commitments will result in a penalty of 40 (100) euros per tonne of CO2 produced without allowances for the first (second) commitment period. The aim of the ETS is that this cost will encourage firms to reduce their emissions. Paolella and Taschini (2008) highlight that the ultimate aim of this scheme (as well as the US CAAA-Title IV scheme) must be to create an environment where there is scarcity of allowances which will lead to an upward trend in prices. As a result we might expect to see mean reversion around an upward trend. However, there has been a considerable amount of uncertainty associated with the price of CO2 emissions over its short life to date. Concomitant to the recent dramatic fall in allowance prices (spot falling from 30 euro in the summer 2008 to 15 euro at the end of 2009) has been growing calls for intervention by the European Commission into the market. Those calling for intervention seethe low prices as incentivising higher rather than lower carbon based technology.1 Any intervention is likely to seriously distort the market and may impede investment in low carbon technology in the future. As noted by Lowrey (2006) a centrally important element of the EU ETS is the establishment of a market determined price for EU allowances. In this article, we take account of market uncertainty and examine the extent of the emergence of an equilibrium relationship between the expectation of EU allowance prices and a set of theoretical determinants, including economic growth, energy prices and weather conditions. Unlike the vast majority of previous work in the area, we take account of both structural and time series properties in examining the behaviour of EU allowance prices. Taking account of both structural and time series properties will indicate whether prices, although currently low, are determined by a stable relationship. The contributions of the paper to the empirical literature on modeling carbon emissions is threefold. Our paper is the first known study to investigate the long-run relationship between theoretically accepted determinants and EU carbon allowances using a battery of cointegration procedures. Cointegration is a powerful econometric approach which can indicate whether a stable relationship exists and whether the behaviour of the variables binding this relationship is consistent with economic theory. Secondly, besides taking account of the potential cointegrating relations, we also address the empirical finding of time varying volatility in the EU ETS and augment time varying volatility into the cointegration tests. Finally, given the relatively small sample of data and the considerable uncertainty, in particular during the pilot phase, we examine the extent of the evolving long-run relationships adopting a recursive cointegration approach. Given the relative paucity of data available and consistent with the previous literature, our analysis will adopt daily data. The full sample of data covers the period 1st July 2005 to 14th December 2009 and so incorporates both a Phase 1 and Phase 2 sample of data. The expirations on our futures contracts are December 2008 and December 2009 and so are only redeemable in Phase 2 of the EU ETS. Our empirical analysis will examine the full sample of data, as well as two sub-samples corresponding to the 2005–07 and 2008–09 periods.2 Unlike the vast majority of the previous studies, our focus will be on futures rather than spot contracts. The justification for examining futures is due to the greater volumes being traded on these contracts (see Mansanet-Bataller and Pardo, 2008).3 These instruments were not exposed to the dramatic structural breaks that have been previously highlighted in the literature and so results in an additional advantage of adopting the futures based analysis. We will adopt the cointegration procedure to identify the existence of a long-run relationship. We also adopt a number of identifying restrictions to further refine our model. Finally, we also carry out a number of sensitivity tests which take account of time varying volatility and the structural breaks in the data. Our results are consistent with previous work in that we find considerable evidence of uncertainty for EU allowances and the range of determinants (see, Paolella & Taschini, 2008 and Benz & Trück, 2009). Although, there have been calls for intervention in the market, our results indicate that for a Phase 2 sample a stable relationship has formed between EU allowances and other determinants. A range of cointegration test results report theoretically consistent relationships have emerged in Phase 2 of the ETS. There is no evidence of this stable relationship occurring for the Phase 1 sample. Our empirical results are also consistent when we take account of the time varying volatility in the data.4 The remainder of this article is structured as follows, Section 2 discusses the performance of Phase 1 and the implications for Phase 2, along with a detailed analysis of the theoretical and empirical determinants. Section 3 describes the methodologies being adopted, while Section 4 presents the data and empirical results. Finally, concluding remarks are presented in Section 5.

InJanuary2005theEUETSwasinstigated,withintheKyotoProtocol, with a view to reducing European emissions of carbon dioxide (CO 2 ). The scheme issues a restricted amount of emission allowances to fi rms on an annual basis and allows fi rms to trade the amount of emission permitsthattheyhold.Hence,theschemehasappliedamarketvalueto this externality. In the EU ETS context the fi rst phase of trading was 2005 – 2007 and the second one, which coincides with the fi rst compliance period of the Kyoto Protocol, is 2008 – 2012. A number of studies have examined the performance of the EU ETS market, however given the infancy of the market the emphasis has been on Phase 1. Recent studies that examine the time series properties of a range of different EU ETS instruments include Paolella and Taschini (2008), Daskalakis et al. (2009) and Benz and Trück (2009) . Unlike the previous cited studies which adopted a pure time series approach, Redmond and Convery (2006), Mans anet-Bataller et al. (2007) and Alberola et al. (2008) examine the behaviour of the price of carbon in relation to energy commodities, meteorological factors and a number of othervariables.Ourcurrentstudyrepresentsanextensionofthesestudies on a number of levels. In this article we have taken account of market uncertainty and have examined the extent of the emergence of an equilibrium relationship between the expectation of EU allowance prices and a set of theoretically founded factors, including, economic growth, energy prices and weather conditions.Ouranalysiscoverstheperiod2005to2009,soweexaminefor bothPhase1(2005 – 2007)andthecurrentPhase2(2008 – 2012)oftheEU ETS. In addition, unlike the vast majority of the previous studies, our focus hasbeenonfuturesratherthanspotcontracts.Thejusti fi cation for examining futures (expiration in December 2008 and 2009) is due to the greater volumes being traded on these contracts (see Mansanet-Bataller and Pardo, 2008 ). These instruments were also not exposed to the dramatic structural breaks that have been previously highlighted in the literatureandsoresultsinanadditi onaladvantageofadoptingthefutures based analysis. Speci fi cally, the contribution of the paper is threefold. Our study is the fi rst known study to investigate the emerging long-runrelationship between theoretically accepted determinants and EU carbon allowances. Consistent with previous fi ndings, in particular Paolella and Taschini (2008) and Benz and Trück (2009) ,we fi nd considerable evidence of autoregressive conditional heteroskedasticity (ARCH) effects. As a result, besides taking account of the potential long-run relations, we also address the empirical fi nding of time varying volatility when testing for cointegration. Finally, given the relatively small sample of data and the considerableuncertainty,inparticularduringthepilot phase,weexamine the extent of the evolving long-run relationships adopting a recursive cointegration approach. AlongsidePhase2 ofthe EU ETS it appears that anewpricingregimeis emerging in the market. The new regime is indicative of an increasingly active market, following the increased volumes of emissions trading in Phase 2. In particular, it appears that theoretically established relations betweenthe expectations onEUallowance prices and energy spreads and energy prices are now evident. This is not surprising in light of the heightened activity in the EU allowance market during the course of its development. It provides further evidence of the rising level of ef fi ciency in the EU allowance market and is expected to be of interest to traders, policy makers and those seeking to improve the design of the European Union's Emissions Trading Scheme.