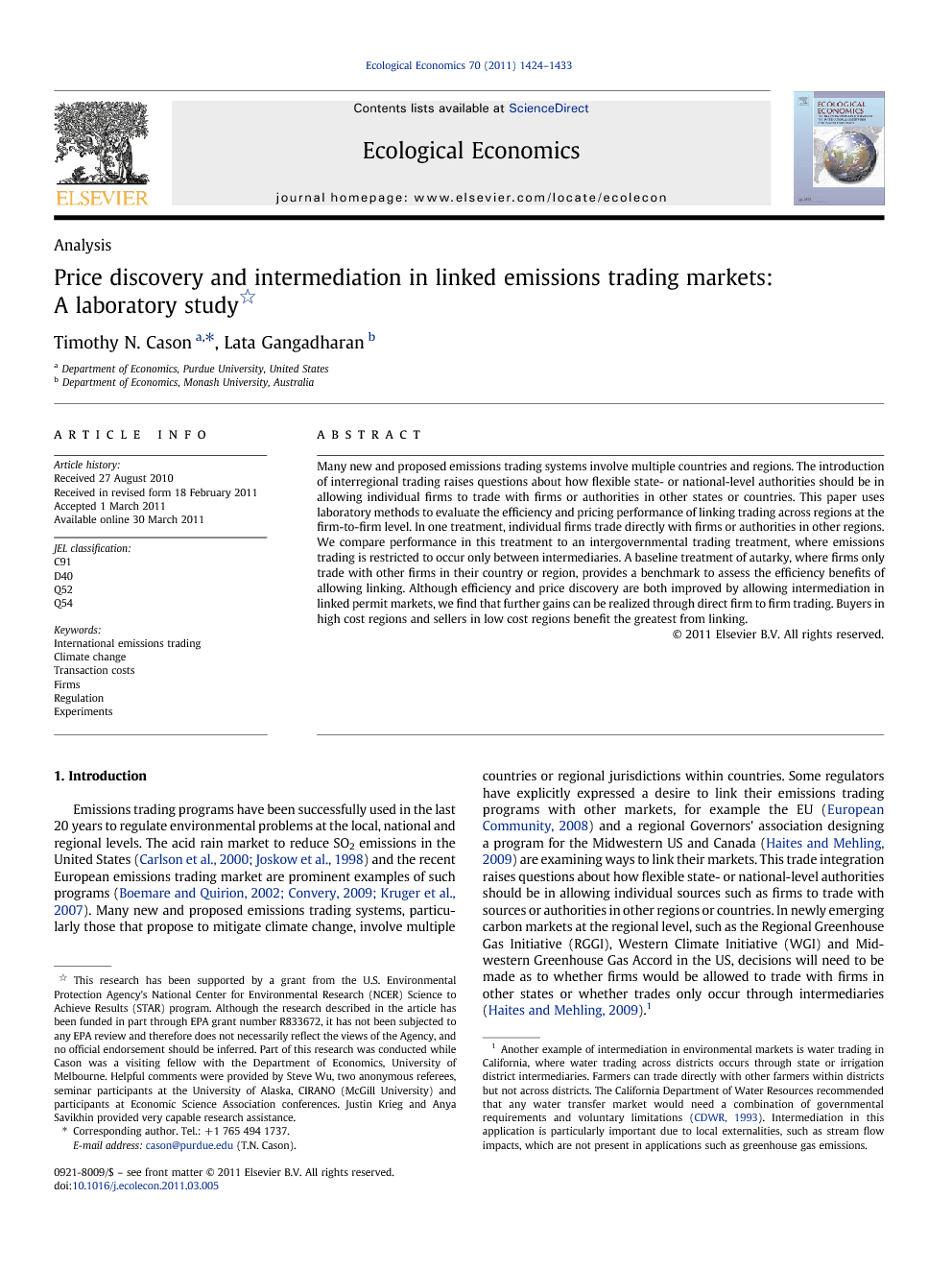 Many new and proposed emissions trading systems involve multiple countries and regions. The introduction of interregional trading raises questions about how flexible state- or national-level authorities should be in allowing individual firms to trade with firms or authorities in other states or countries. This paper uses laboratory methods to evaluate the efficiency and pricing performance of linking trading across regions at the firm-to-firm level. In one treatment, individual firms trade directly with firms or authorities in other regions. We compare performance in this treatment to an intergovernmental trading treatment, where emissions trading is restricted to occur only between intermediaries. A baseline treatment of autarky, where firms only trade with other firms in their country or region, provides a benchmark to assess the efficiency benefits of allowing linking. Although efficiency and price discovery are both improved by allowing intermediation in linked permit markets, we find that further gains can be realized through direct firm to firm trading. Buyers in high cost regions and sellers in low cost regions benefit the greatest from linking.

Emission markets are being implemented and proposed around the world to reduce the costs involved in mitigating climate change. Research has shown that the actual cost savings achieved can depend critically on the choices of market institutions and the details of trading. This study examines the impact of specific design choices that need to be made when linking emissions trading across different markets. In particular we study if price discovery and efficiency are higher in the emission markets when firms trade directly with each other, than when trade occurs through intermediaries. Our results indicate clearly that prices more accurately reflect a common inter-regional (across-market) marginal abatement cost when linking is allowed. This increases trading efficiency, and especially benefits buyers in high abatement cost regions and sellers in low abatement cost regions. In practice, such linking would clearly result in a lower overall total cost of meeting an emissions reduction goal. If trade must occur through government agents or other types of intermediaries, our results show that prices are nearly as accurate as when individual emitters in different regions can trade directly, although efficiency levels are significantly lower. The main drawback of intermediaries is that they could significantly raise transaction costs, leading to reduced trading activity and lower efficiency. Lower trading volume by intermediaries is observed especially in larger emissions trading markets, potentially disadvantaging firms in these markets. This suggests that linking markets using intermediaries can lead to inefficiencies in individual regional markets, and these inefficiencies could spill over to other markets and reduce overall trading efficiency because intermediaries trade insufficient volume both in local and linked markets. The use of government intermediaries also risks problems of thin markets, especially if few countries or regions participate in international exchange and if trade occurs through bilateral or multilateral negotiation and not through a centralized and competitive trading institution, like the one used in this experiment.15 An examination of welfare in our study shows that the surplus captured by the intermediaries reduces the profits available for the firms. These profits may be further reduced if trading were organized in alternative ways and depended more on the bargaining abilities of the market participants and less on competitive market forces. For example, Menkhaus et al. (2003) find that alternative trading institutions can affect market outcomes in agricultural production and processing, with deviations from the competitive model being most in institutions with private, bilateral negotiation. This indicates that a rigorous analysis of the impact of intermediation can be useful. Our experiment helps to provide some empirical guidance for the policy making process by providing detailed information about surplus, efficiency and transaction costs which could be unavailable or difficult to measure in the field. Although one needs to be careful when generalizing from the results of a particular study, we believe that our research can provide some insights about the role played by governmental and non-governmental organizations in different economic exchanges. For example, state trading enterprises, prevalent in the agricultural sector, are often granted exclusive or special rights to influence the level or direction of imports and exports. They are usually producer-controlled, state-sanctioned monopolies with exclusive authority for a wide range of market interventions, such as the regulation and purchase of domestic output, setting consumer and producer prices and conducting foreign trade (FAO, 2002). Critics of these enterprises argue that their activities are trade distorting. Our results suggest that trading via intermediaries (similar to state trading enterprises) could increase transaction costs thus leading to inefficiencies, but they may not distort prices significantly.