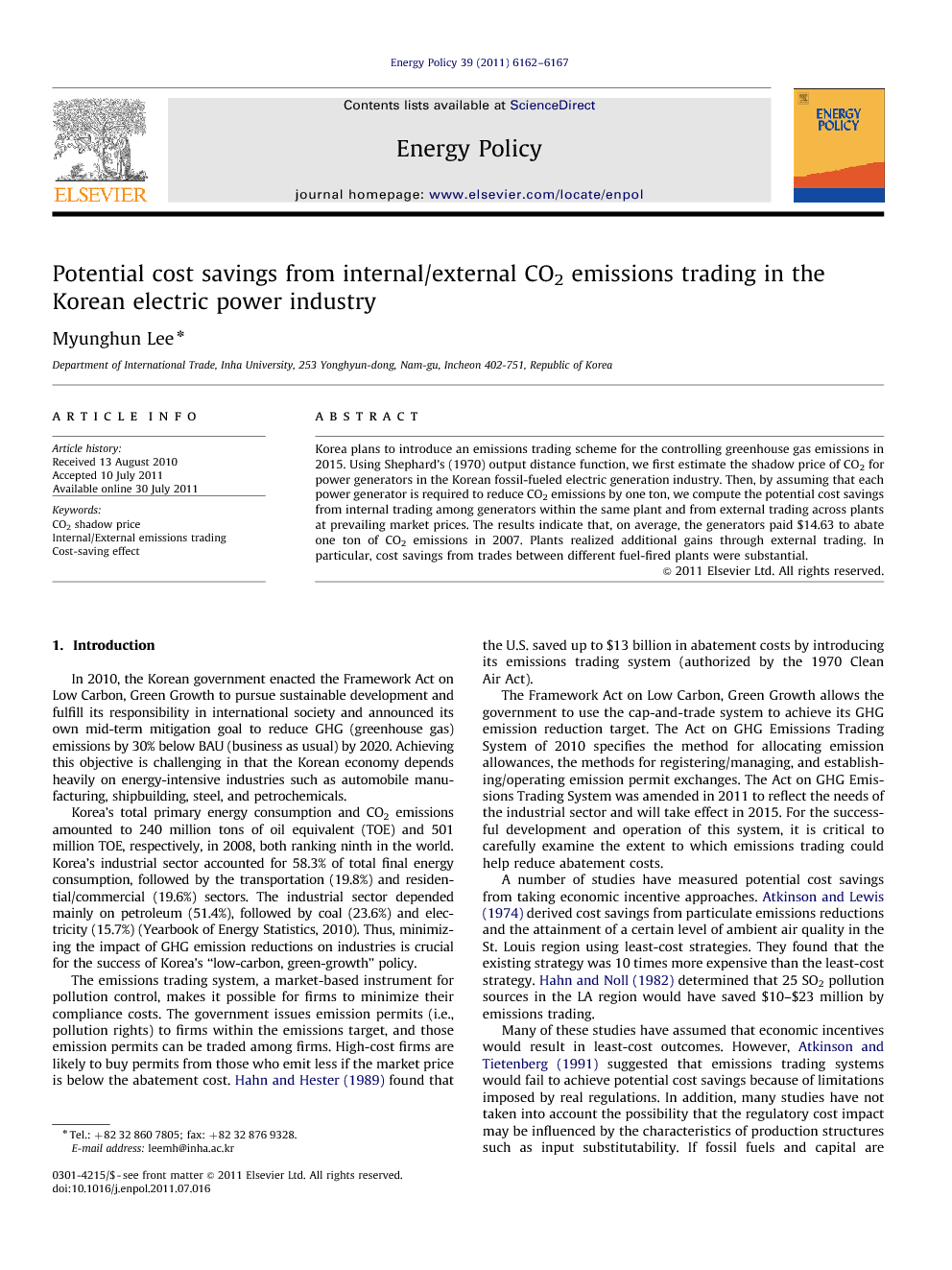 Korea plans to introduce an emissions trading scheme for the controlling greenhouse gas emissions in 2015. Using Shephard's (1970) output distance function, we first estimate the shadow price of CO2 for power generators in the Korean fossil-fueled electric generation industry. Then, by assuming that each power generator is required to reduce CO2 emissions by one ton, we compute the potential cost savings from internal trading among generators within the same plant and from external trading across plants at prevailing market prices. The results indicate that, on average, the generators paid $14.63 to abate one ton of CO2 emissions in 2007. Plants realized additional gains through external trading. In particular, cost savings from trades between different fuel-fired plants were substantial.

In 2010, the Korean government enacted the Framework Act on Low Carbon, Green Growth to pursue sustainable development and fulfill its responsibility in international society and announced its own mid-term mitigation goal to reduce GHG (greenhouse gas) emissions by 30% below BAU (business as usual) by 2020. Achieving this objective is challenging in that the Korean economy depends heavily on energy-intensive industries such as automobile manufacturing, shipbuilding, steel, and petrochemicals. Korea's total primary energy consumption and CO2 emissions amounted to 240 million tons of oil equivalent (TOE) and 501 million TOE, respectively, in 2008, both ranking ninth in the world. Korea's industrial sector accounted for 58.3% of total final energy consumption, followed by the transportation (19.8%) and residential/commercial (19.6%) sectors. The industrial sector depended mainly on petroleum (51.4%), followed by coal (23.6%) and electricity (15.7%) (Yearbook of Energy Statistics, 2010). Thus, minimizing the impact of GHG emission reductions on industries is crucial for the success of Korea's “low-carbon, green-growth” policy. The emissions trading system, a market-based instrument for pollution control, makes it possible for firms to minimize their compliance costs. The government issues emission permits (i.e., pollution rights) to firms within the emissions target, and those emission permits can be traded among firms. High-cost firms are likely to buy permits from those who emit less if the market price is below the abatement cost. Hahn and Hester (1989) found that the U.S. saved up to $13 billion in abatement costs by introducing its emissions trading system (authorized by the 1970 Clean Air Act). The Framework Act on Low Carbon, Green Growth allows the government to use the cap-and-trade system to achieve its GHG emission reduction target. The Act on GHG Emissions Trading System of 2010 specifies the method for allocating emission allowances, the methods for registering/managing, and establishing/operating emission permit exchanges. The Act on GHG Emissions Trading System was amended in 2011 to reflect the needs of the industrial sector and will take effect in 2015. For the successful development and operation of this system, it is critical to carefully examine the extent to which emissions trading could help reduce abatement costs. A number of studies have measured potential cost savings from taking economic incentive approaches. Atkinson and Lewis (1974) derived cost savings from particulate emissions reductions and the attainment of a certain level of ambient air quality in the St. Louis region using least-cost strategies. They found that the existing strategy was 10 times more expensive than the least-cost strategy. Hahn and Noll (1982) determined that 25 SO2 pollution sources in the LA region would have saved $10–$23 million by emissions trading. Many of these studies have assumed that economic incentives would result in least-cost outcomes. However, Atkinson and Tietenberg (1991) suggested that emissions trading systems would fail to achieve potential cost savings because of limitations imposed by real regulations. In addition, many studies have not taken into account the possibility that the regulatory cost impact may be influenced by the characteristics of production structures such as input substitutability. If fossil fuels and capital are strongly substitutable, then compliance costs may be lower than otherwise. Therefore, it is desirable to estimate the production function or alternatively a dual cost function in capturing actual abatement costs. Perl and Dunbar (1982) showed that, on average, abatement costs for the power plant industry can be reduced by 36.6% by implementing SO2 emissions trading. Gollop and Roberts (1985) suggested that regional SO2 trading may enable power plants to reduce abatement costs by as much as 47%. These two studies took advantage of a dual cost function. The present paper assumes that emissions trading is allowed among power plants emitting CO2. For examining how market prices are determined and who buys or sells emission permits, it is necessary to investigate plants' cost structure for CO2 abatement. Using Shephard's (1970) output distance function, we estimate the shadow price of CO2, defined as the opportunity cost of abating one ton of CO2 in terms of forgone electricity, for 11 fossil-fueled power plants (52 generators) in 2007. The distance function has two major advantages over the cost function—the maintained hypothesis of cost minimization is not imposed, and information on input prices and specific regulatory constraints are not required (Grosskopf et al., 1995 and Lee, 2007). Thus, the distance function is suitable for studying Korean industries for which limited data are available. Then, by requiring each generator to reduce CO2 emissions by one ton, we compute the potential cost savings from internal trading among generators within the same plant and from external trading across plants at prevailing market prices.1 The rest of this paper proceeds as follows. Section 2 defines the output distance function and derives the shadow price of CO2. Section 3 presents the data and discusses the empirical results. Section 4 computes the gains from internal and external emissions trading, and Section 5 concludes.

To minimize the impact of GHG emissions regulation on the industrial sector, Korea plans to introduce an emissions trading scheme in 2015. In this regard, for the successful development and operation of this scheme, it is critical to carefully examine the extent to which emissions trading could help reduce abatement costs. By allowing power plants in the Korean electric generation industry to trade CO2 emissions both within the same plant and across different plants, we estimated the shadow price of CO2, which is equivalent to the marginal abatement cost, for 11 power plants (52 generators). The estimates of shadow prices of one ton of CO2 averaged $14.63 across the generators; those for coal generators were lower than those for oil generators. By requiring the generators to reduce CO2 emissions by one ton, we computed the potential cost savings from internal emissions trading between generators within the same plant for seven plants. The maximum cost savings from internal trading for individual plants ranged from $2.1 to $6.15 per generator. We then calculated the potential cost savings from external emissions trading across plants at prevailing market prices. The results indicate that with no additional transaction costs, the plants could realize additional gains through external trading. In particular, external trading between plants using different fuel sources was superior to that between plants using the same fuel source in terms of reductions in abatement costs. Korea should aim at introducing internal CO2 emissions trading and further examine the potential of introducing external emissions trading, beside others with respect to transaction costs and the acceptance of industries for participating in the emissions trading scheme. Also potential future developments of the analysis could be discussed to show the ways in which the assessments could be further extended/improved to further enhance the scientific basis for decisions about the design of an emissions trading scheme in Korea. But this may go too far for the article.