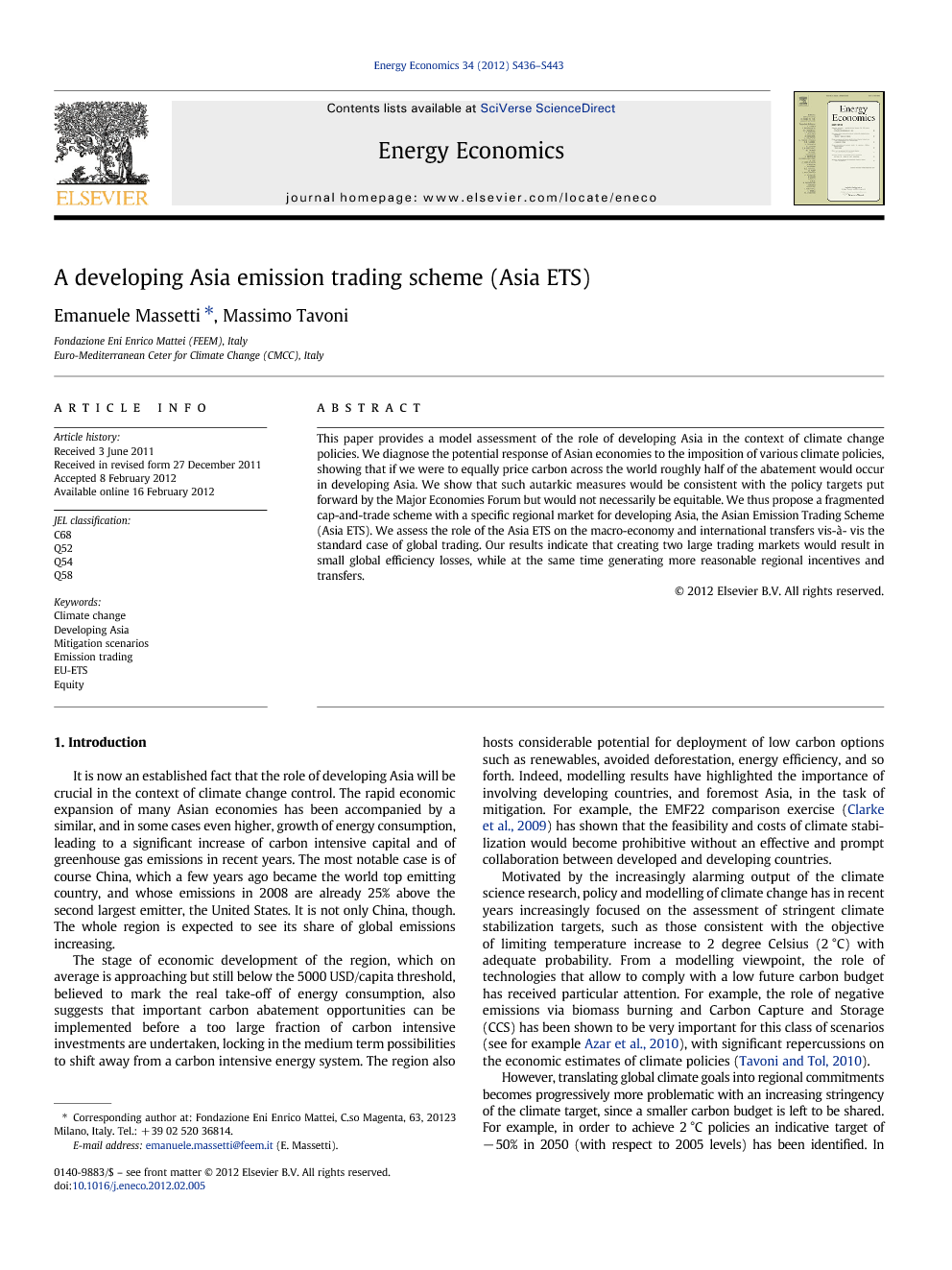 This paper provides a model assessment of the role of developing Asia in the context of climate change policies. We diagnose the potential response of Asian economies to the imposition of various climate policies, showing that if we were to equally price carbon across the world roughly half of the abatement would occur in developing Asia. We show that such autarkic measures would be consistent with the policy targets put forward by the Major Economies Forum but would not necessarily be equitable. We thus propose a fragmented cap-and-trade scheme with a specific regional market for developing Asia, the Asian Emission Trading Scheme (Asia ETS). We assess the role of the Asia ETS on the macro-economy and international transfers vis-à- vis the standard case of global trading. Our results indicate that creating two large trading markets would result in small global efficiency losses, while at the same time generating more reasonable regional incentives and transfers.

It is now an established fact that the role of developing Asia will be crucial in the context of climate change control. The rapid economic expansion of many Asian economies has been accompanied by a similar, and in some cases even higher, growth of energy consumption, leading to a significant increase of carbon intensive capital and of greenhouse gas emissions in recent years. The most notable case is of course China, which a few years ago became the world top emitting country, and whose emissions in 2008 are already 25% above the second largest emitter, the United States. It is not only China, though. The whole region is expected to see its share of global emissions increasing. The stage of economic development of the region, which on average is approaching but still below the 5000 USD/capita threshold, believed to mark the real take-off of energy consumption, also suggests that important carbon abatement opportunities can be implemented before a too large fraction of carbon intensive investments are undertaken, locking in the medium term possibilities to shift away from a carbon intensive energy system. The region also hosts considerable potential for deployment of low carbon options such as renewables, avoided deforestation, energy efficiency, and so forth. Indeed, modelling results have highlighted the importance of involving developing countries, and foremost Asia, in the task of mitigation. For example, the EMF22 comparison exercise (Clarke et al., 2009) has shown that the feasibility and costs of climate stabilization would become prohibitive without an effective and prompt collaboration between developed and developing countries. Motivated by the increasingly alarming output of the climate science research, policy and modelling of climate change has in recent years increasingly focused on the assessment of stringent climate stabilization targets, such as those consistent with the objective of limiting temperature increase to 2 degree Celsius (2 °C) with adequate probability. From a modelling viewpoint, the role of technologies that allow to comply with a low future carbon budget has received particular attention. For example, the role of negative emissions via biomass burning and Carbon Capture and Storage (CCS) has been shown to be very important for this class of scenarios (see for example Azar et al., 2010), with significant repercussions on the economic estimates of climate policies (Tavoni and Tol, 2010). However, translating global climate goals into regional commitments becomes progressively more problematic with an increasing stringency of the climate target, since a smaller carbon budget is left to be shared. For example, in order to achieve 2 °C policies an indicative target of − 50% in 2050 (with respect to 2005 levels) has been identified. In 2009 the G8 combined this level of ambition with a target for developed countries (− 80 to − 95%), thus effectively determining the obligations of the developing world as well. Similarly, the OECD International Energy Agency (IEA) recently stated that China's emissions need to peak by 2020 if the world is to meet the above mentioned 2050 target.1 Not surprisingly, the reaction from developing countries has not been favourable, as such obligations are feared to come at a cost in terms of economic growth. Thus, from a research standpoint, there is a need to discuss under what conditions stringent climate targets and a reasonably just allocation of effort can be jointly met (Tavoni et al., 2011). Asia is the key on both fronts, since it is a fast growing and emitting region, which also hosts a large share of the global population, including many people still in poverty. On the front of mitigation, it is imperative to understand the drivers of emissions in a baseline case, and to compare this counterfactual to the abatement opportunities that the region offers. As for the repartition of the global climate mitigation effort, it is important to evaluate acceptable levels of regional commitments and to design policy instruments that facilitate this process. This paper aims at contributing to both issues. Within the context of the Asia Modeling Exercise (AME) we run a set of coordinated scenarios that include a baseline and a series of domestic climate policies. We complement this analysis with the issue of burden sharing, focusing on the role of international carbon quota policies. Specifically, we confront the standard, idealized case of a global carbon market with one in which this coexists with a specific carbon market for developing Asia, the Asia Emission Trading Scheme (Asia ETS). A series of research questions are at the core of this analysis. What is the role of developing Asia in shaping global emissions and what are their abatement opportunities? How far is the baseline scenario from the 2050 targets discussed in policy, and what is the regional effort required to achieve them? How can we combine efficiency and equity, while maximizing political acceptability? Unsurprisingly, the paper falls short of providing definitive answers to all of these important questions. Nonetheless, it strives to provide an assessment of the role of Asia in the context of climate stabilization that considers both the technological, economic and equity aspects at the same time. The paper is structured into five sections. In the next one, we quickly describe the methodology and the set-up of the experiment. Then, we provide a diagnosis of Asia emissions under a Business-as-Usual as well as under domestic climate policies. In 4 and 5, we present and discuss the role of an the Asia ETS. Conclusions are summarized in Section 6.

The active participation of developing Asia to the international effort to control global warming is crucial. The largest fraction of the incremental growth of GHGs is expected to come from the developing countries of Asia. If the present trend is not changed, it will be impossible to achieve even moderate climate policy targets. In fact, the world is asking developing Asia to engage in extremely ambitious emission reduction policies. This paper shows that the G8 and MEF pledge to reduce global emissions by 50% in 2050 implicitly assumes that developing Asia must cut emissions by 70–80% with respect to the BaU scenario. The size of the contraction needed with respect to the BaU is a good indicator of the level of effort required to fast growing developing economies. This paper also examines other indicators of the stringency of the 2050 target. Emissions per capita, the “tax burden”, the macroeconomic GDP loss, indicate that the distribution of effort implied by the G8 and the MEF target falls disproportionately on developing Asia and other developing nations. Since G8 countries have already committed to severe emission reductions, our analysis shows that the pledge to reduce global emissions by 50% in 2050 is extremely ambitious. There is without doubts a trade-off between an equitable burden sharing and the climate objective. It is therefore of utmost importance to refocus the discussion on equitable and realistic distribution of effort. Ideally, any global stabilization target can be achieved by means of any distribution of international emission permits, if global trade is allowed. The market guarantees an efficient solution, independently from the initial distribution. However, it is hard to conceive that a global carbon market will exist in the first half of the century. The financial flows towards developing countries might be unsustainable from a political and economic point of view. In addition, it will be hard to ensure a smooth and transparent functioning of the market for the obvious difficulties in monitoring and verification of the emission credits. A solution with only autarchic action, which however takes care of equity issues, is equally not desirable because of the inefficiencies that arise as a consequence of very large disparities among carbon prices internationally. For those reasons many advocate the creation of regional carbon markets, with the possibility to link them with different degrees of interconnection. This paper contributes to this literature by introducing the concept and assessing the potential of a developing Asia Emission Trading Scheme (Asia ATS). We envision the creation of an Asian “bubble” that is distributed among countries at a regional negotiation level. The Asia ATS would resemble very much the European Emissions Trading Scheme (EU-ETS). This paper shows that the advantages of building a regional market for emissions in Asia are many. First, under a contraction-and-convergence allocation scheme, which was used as a prototype for a fair international allocation of effort, developing Asia appears to be self-sufficient with respect to the rest of the world, at least until 2050. Thus, treating developing Asia as a single block in international negotiations would not create large international unbalances. Second, the reduced competition for cheap abatement opportunities in Asia reduces the price of carbon in the region. This has obvious beneficial consequences for China, which is the regional net importer of emission credits. It has however also indirect beneficial implications for the large exporters of emission permits: a lower price and lower volumes in the market reduce the financial inflows in exporting countries to a politically and economically acceptable level. Third, the Asia ETS increases only marginally the cost of climate policy in OECD economies, which increases the political acceptability of this scheme. Finally, a regional emissions “bubble” would foster cooperation among developing Asia countries. Issue linkage would become more concretely possible, given the many areas of cooperation that already exist among many countries in the region. China is going to be the large regional leader in the future and will also play a major role in the Asia ETS. Being the country with the higher level of per capita emissions and one of the highest levels of income per capita, China would be a net buyer in the market. Without the interference of OECD economies it would enjoy greater access to regional cheap abatement opportunities and reduce considerably mitigation costs. At the same time, China would have a unique possibility to contribute to the regional development. Large, CDM-like, emission reductions project might be associated to bi-lateral agreements on economic and technological cooperation. At the same time China would also have greater responsibilities. From being a follower in global climate policy, it would become a leader of the regional climate policy, with all the burden to monitor and verify regional progresses. Some caveats apply to our analysis. First, we used a very simplified allocation scheme. Many others are possible and the research of the Pareto optimal allocation is left for future research. Second, the Asia ETS might not be implementable due to the lack of sufficiently strong regional institutions. The confrontation on distribution issues might exacerbate, rather than alleviate, regional contrapositions, especially between China and India. Third, our analysis deals only with the first part of the century. Preliminary results show that developing Asia might become a net importer of emission permits as the stringency of the target increases enormously at the end of the century.