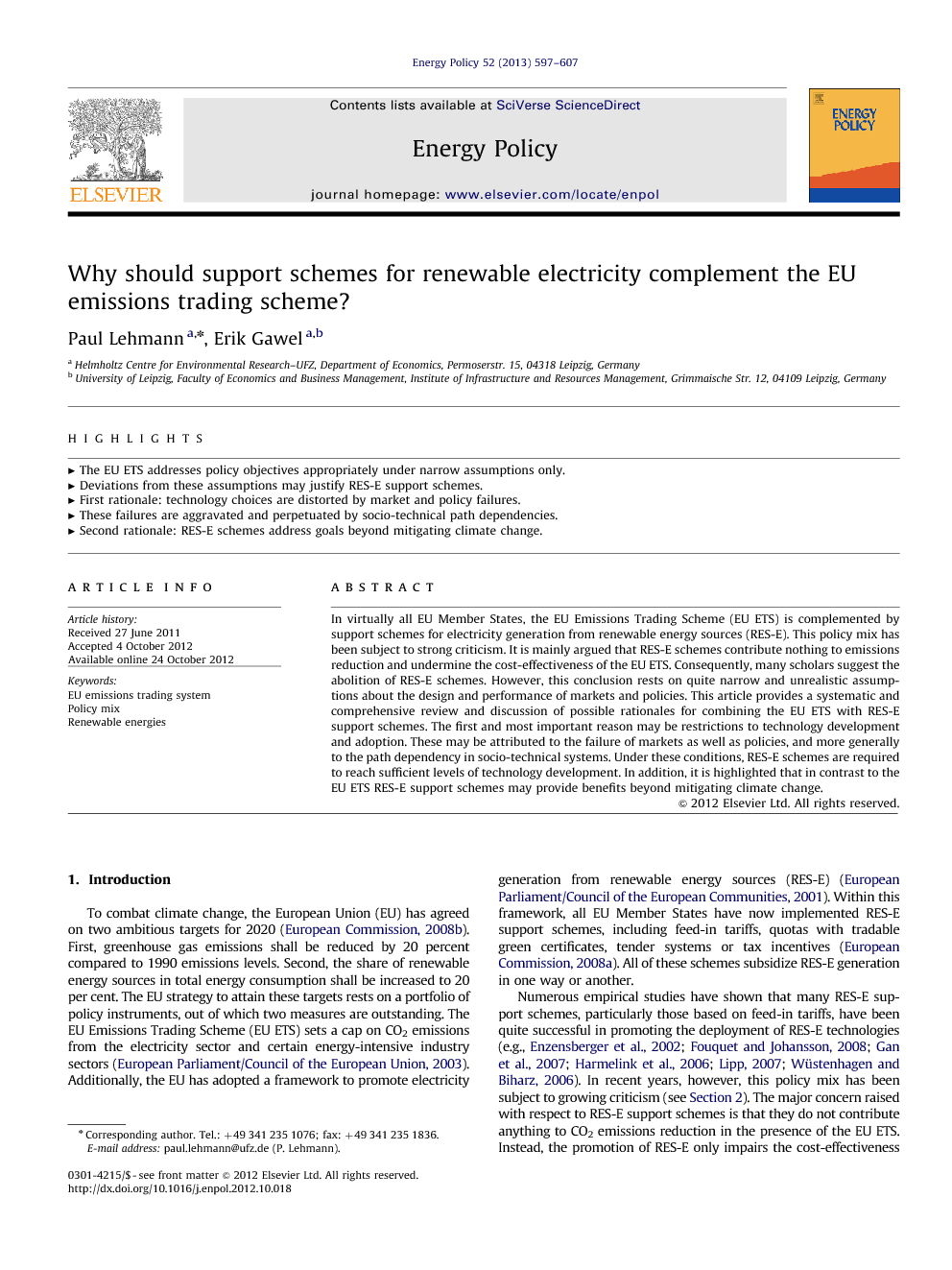 In virtually all EU Member States, the EU Emissions Trading Scheme (EU ETS) is complemented by support schemes for electricity generation from renewable energy sources (RES-E). This policy mix has been subject to strong criticism. It is mainly argued that RES-E schemes contribute nothing to emissions reduction and undermine the cost-effectiveness of the EU ETS. Consequently, many scholars suggest the abolition of RES-E schemes. However, this conclusion rests on quite narrow and unrealistic assumptions about the design and performance of markets and policies. This article provides a systematic and comprehensive review and discussion of possible rationales for combining the EU ETS with RES-E support schemes. The first and most important reason may be restrictions to technology development and adoption. These may be attributed to the failure of markets as well as policies, and more generally to the path dependency in socio-technical systems. Under these conditions, RES-E schemes are required to reach sufficient levels of technology development. In addition, it is highlighted that in contrast to the EU ETS RES-E support schemes may provide benefits beyond mitigating climate change.

To combat climate change, the European Union (EU) has agreed on two ambitious targets for 2020 (European Commission, 2008b). First, greenhouse gas emissions shall be reduced by 20 percent compared to 1990 emissions levels. Second, the share of renewable energy sources in total energy consumption shall be increased to 20 per cent. The EU strategy to attain these targets rests on a portfolio of policy instruments, out of which two measures are outstanding. The EU Emissions Trading Scheme (EU ETS) sets a cap on CO2 emissions from the electricity sector and certain energy-intensive industry sectors (European Parliament/Council of the European Union, 2003). Additionally, the EU has adopted a framework to promote electricity generation from renewable energy sources (RES-E) (European Parliament/Council of the European Communities, 2001). Within this framework, all EU Member States have now implemented RES-E support schemes, including feed-in tariffs, quotas with tradable green certificates, tender systems or tax incentives (European Commission, 2008a). All of these schemes subsidize RES-E generation in one way or another. Numerous empirical studies have shown that many RES-E support schemes, particularly those based on feed-in tariffs, have been quite successful in promoting the deployment of RES-E technologies (e.g., Enzensberger et al., 2002, Fouquet and Johansson, 2008, Gan et al., 2007, Harmelink et al., 2006, Lipp, 2007 and Wüstenhagen and Biharz, 2006). In recent years, however, this policy mix has been subject to growing criticism (see Section 2). The major concern raised with respect to RES-E support schemes is that they do not contribute anything to CO2 emissions reduction in the presence of the EU ETS. Instead, the promotion of RES-E only impairs the cost-effectiveness of the EU ETS. This paper aims to clarify whether this criticism disqualifies the use of RES-E support schemes in general—or whether there are conditions under which a policy mix is nevertheless required. We argue that a general rejection of RES-E policies is only justified on the basis of quite narrow assumptions about the design and performance of markets and policies: if technology choices are only distorted by the negative externality from CO2 emissions and if climate change mitigation is the only policy objective. This paper provides a systematic and comprehensive review and discussion of possible rationales for combining the EU ETS with RES-E support schemes. It reveals that justifications for RES-E policies are numerous—and that a policy mix may also be welfare-increasing.1 Obviously, the eventual performance of the policy mix depends also on the details of designing RES-E policies, e.g., the support mechanisms (feed-in tariffs vs. quotas with tradable green certificates) or the level and differentiation chosen for such subsidies.2 Yet, this discussion is beyond the scope of this paper. The next section reviews the discussion on interactions between the EU ETS and RES-E support schemes. Subsequent sections are dedicated to possible rationales for using a policy mix. Section 3 illustrates possible restrictions to technology development and adoption. Section 4 highlights possible benefits of RES-E support schemes beyond mitigating climate change. Section 5 summarizes and concludes.

In a perfect world with undistorted technology and energy markets except for a climate externality, with a simple marginal technology choice framework without positive feedbacks and a benevolent dictator providing efficient institutions and in a world whose one and only worry is about mitigating GHG emissions there is evidently no need for additional RES-E support schemes given a perfect EU ETS already implemented. Unfortunately, nary a condition of this imaginary setting holds true in reality. For the purpose of policy recommendations it is decisive to take into account the real-life conditions energy and climate policies have to cope with. In this perspective, with reference to RES-E support schemes a considerable modification of the general reproof of being needless and even harmful is required. This should not be mistaken for a plea for (steady) subsidizing politically desirable technologies. Rather, a differentiated analysis is needed in this field appreciating the theoretical assumptions as well as their practical relevance for a model-based assessment of real-world policies. Hence, the oftentimes observed disqualification of RES-E support schemes in academic literature on a general basis has to be replaced by a differentiated analysis of the relevant policy alternatives keeping in mind multiple policy objectives and real-world conditions for both political process and market performance. Our analysis suggests that under such conditions a policy mix of the EU ETS and complementary RES-E support schemes may be justified for a variety of reasons. Obviously, RES-E support schemes are not by definition welfare improving. Details of policy design – which have not been the focus of our paper – matter of course. As any technology policy instrument, they are subject to uncertainty about future technology development. Consequently, they also run the risk of locking society into a new technological path which may turn out to be suboptimal in future (Kverndokk et al., 2004). Moreover, RES-E support schemes may also create powerful advocacy coalitions which attempt to capture rents for their associates (Jacobsson and Lauber, 2006). In this sense, RES-E policies may also lead to policy failure themselves. However, these insights cannot be interpreted as an argument for abstaining from RES-E support in general. Inaction would imply accepting the existing mix of fuels for electricity generation which is clearly suboptimal. The arguments rather illustrate that RES-E schemes have to be designed in a careful manner—which takes into account knowledge available today and allows for dynamic policy adaptations and improvements in the future. In order to be able to provide yet more elaborated policy recommendations in the future, the following research strands are particularly promising: (1) The empirical assessment of market failures associated with the development of RES-E technologies, in particular knowledge spillovers, is still rudimentary. To our knowledge the only study existing so far is that by Braun et al. (2010). (2) The policy relevance of multiple objectives of sustainability should receive more attention: Neither it is all about (static) efficiency nor do we face just a carbon emission problem when designing energy-related governance. Some attention has been paid to the simultaneous attainment of CO2 reduction and RES-E deployment targets or industry policy goals. However, other concerns such as using RES-E policies to reduce fuel imports and address security of energy supply remain under-researched. (3) The understanding of political-economy rationales for implementing governance structures is still in its infancy (studies by Matthes, 2010 and Ulph and Ulph, 2010 are examples), and requires further investigation, particularly whether first-best conditions for efficient governance (such as a powerful ETS) are likely to be provided by policy-makers.