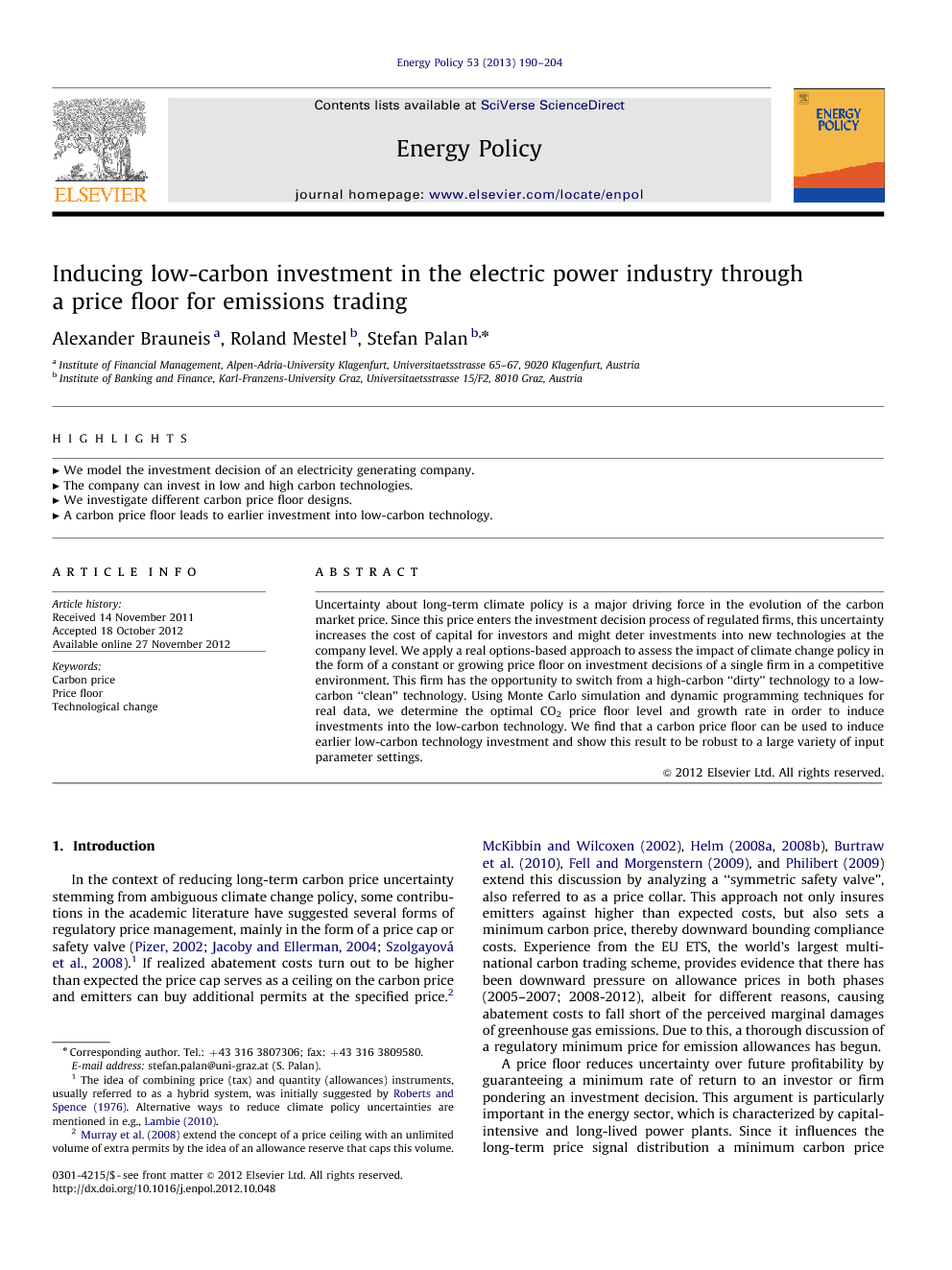 Uncertainty about long-term climate policy is a major driving force in the evolution of the carbon market price. Since this price enters the investment decision process of regulated firms, this uncertainty increases the cost of capital for investors and might deter investments into new technologies at the company level. We apply a real options-based approach to assess the impact of climate change policy in the form of a constant or growing price floor on investment decisions of a single firm in a competitive environment. This firm has the opportunity to switch from a high-carbon “dirty” technology to a low-carbon “clean” technology. Using Monte Carlo simulation and dynamic programming techniques for real data, we determine the optimal CO2 price floor level and growth rate in order to induce investments into the low-carbon technology. We find that a carbon price floor can be used to induce earlier low-carbon technology investment and show this result to be robust to a large variety of input parameter settings.

In this paper we evaluate the effects of downward limited stochastic CO 2 prices on the investment decision of a profit maximizing energy producer. We apply an approach derived from real options valuation and demonstrate that a CO 2 price floor can be used to induce emitters to accelerate their invest- ments in low-carbon technologies. We choose the power sector for our analysis since the decarbonization of this industry is a conditio sine qua non for achieving lower emission targets because it accounts for a substantial proportion of total green- house gas emissions. The key argument lies in the fact that the decision to invest in low-carbon generation technologies immediately may be superior to continuing to operate a high- carbon technology, especially in high permit price regimes. This decision is made by comparing the expected net present value of an immediate clean investment to that resulting from deferring the investment. Our results identify the appropriate level of a constant minimum CO 2 -price in our setting – imply- ing an immediate ‘‘clean’’ investment – to fluctuate between 30 and 35 EUR/ton. An alternative solution is to introduce a fixed initial minimum price which then increases over time, as it is currently being implemented in the UK ( Treasury, 2010 ). Simulations reveal that under this approach, the starting CO 2 price floor can be considerably lower, with its optimal level – predictably – depending on the growth rate. Unsurprisingly, the specific switching time turns out to be sensitive with respect to the model inputs, especially when using parameter settings which balance the optimal switching time between t n ¼ 1 and t n ¼ 10. However, our qualitative results robustly obtain under a wide range of parameter settings. We perform extensive robustness checks to find patterns in the distribution of optimal switching times. In particular, some parameter settings balance the optimal investment timing some- where in the interior of the investment decision horizon. We use this observation to clearly identify the impacts of changes in theCO 2 price floor, its growth rate, the drift and diffusion of the CO 2 price process and the discount and tax rates. 24 We thus demonstrate that the carbon market not only helps the regulator to meet emission targets in an allocationally efficient way, but in combination with a price floor can also be used as an instrument to stimulate the adoption of low-carbon technologies. Note that we do not claim that a price floor is the optimal solution from an economic point of view, yet that it is a politically feasible instrument which leads to economically satis- fying results. Several political proposals (e.g., in Australia, the UK and US) in the recent past support this view. By now it seems to have become apparent that a pure permit trading system will not suffice as the sole driver in reaching the target of a decarbonized economy. A mixture of policy instruments appears instead to be necessary to stabilize our climate. A carbon price floor is one such instrument which is able to enhance the role of an emissions trading system in this process.