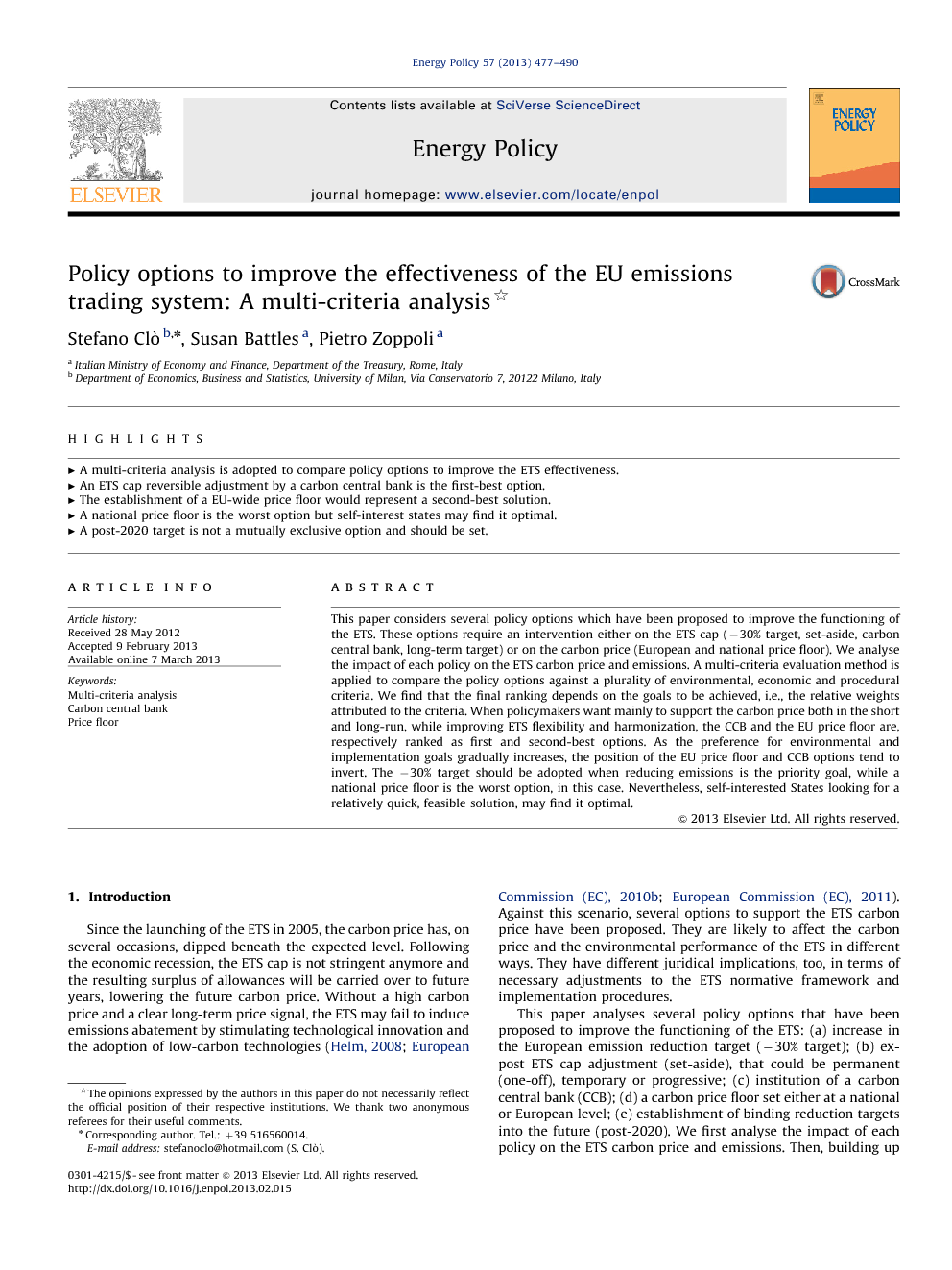 This paper considers several policy options which have been proposed to improve the functioning of the ETS. These options require an intervention either on the ETS cap (−30% target, set-aside, carbon central bank, long-term target) or on the carbon price (European and national price floor). We analyse the impact of each policy on the ETS carbon price and emissions. A multi-criteria evaluation method is applied to compare the policy options against a plurality of environmental, economic and procedural criteria. We find that the final ranking depends on the goals to be achieved, i.e., the relative weights attributed to the criteria. When policymakers want mainly to support the carbon price both in the short and long-run, while improving ETS flexibility and harmonization, the CCB and the EU price floor are, respectively ranked as first and second-best options. As the preference for environmental and implementation goals gradually increases, the position of the EU price floor and CCB options tend to invert. The −30% target should be adopted when reducing emissions is the priority goal, while a national price floor is the worst option, in this case. Nevertheless, self-interested States looking for a relatively quick, feasible solution, may find it optimal.

Since the launching of the ETS in 2005, the carbon price has, on several occasions, dipped beneath the expected level. Following the economic recession, the ETS cap is not stringent anymore and the resulting surplus of allowances will be carried over to future years, lowering the future carbon price. Without a high carbon price and a clear long-term price signal, the ETS may fail to induce emissions abatement by stimulating technological innovation and the adoption of low-carbon technologies (Helm, 2008; European Commission (EC), 2010b; European Commission (EC), 2011). Against this scenario, several options to support the ETS carbon price have been proposed. They are likely to affect the carbon price and the environmental performance of the ETS in different ways. They have different juridical implications, too, in terms of necessary adjustments to the ETS normative framework and implementation procedures. This paper analyses several policy options that have been proposed to improve the functioning of the ETS: (a) increase in the European emission reduction target (−30% target); (b) ex-post ETS cap adjustment (set-aside), that could be permanent (one-off), temporary or progressive; (c) institution of a carbon central bank (CCB); (d) a carbon price floor set either at a national or European level; (e) establishment of binding reduction targets into the future (post-2020). We first analyse the impact of each policy on the ETS carbon price and emissions. Then, building up on Konidari and Mavrakis (2007) (hereafter KM), a multi-criteria evaluation (MCA) method is applied to evaluate and compare the policy options. The MCA is performed in four steps. First step: a comprehensive set of multiple criteria regarding both the economic, environmental and procedural effects of each proposal is selected. Second step: Each of these criteria is weighted. Third step: each policy option is evaluated against the weighted criteria. Fourth step: for any policy option the different grades are summed up, providing a single value which synthesizes its overall performance. The MCA allows for a ranking of the various policy options and makes it possible to identify the most appropriate instrument to improve the effectiveness of the ETS. The paper is organized in the following manner. Section 2 summarizes the inefficiencies that characterize the ETS performance to date. Section 3 introduces the various policy options and analyses their different impact on the carbon price and emissions within the ETS. Section 4 introduces the MCA and describes the criteria selected to evaluate the policy options. Section 5 analyses the techniques we adopt to evaluate and rank the various policy options. Section 6 presents the grades attached to each policy option against the various criteria, while Section 7 describes the final ranking of the policy options and tests its robustness through a sensitivity analysis (SA). Section 8 concludes.

Several measures aimed at improving the effectiveness of the ETS have been proposed within the European climate policy debate. This paper has analysed the economic and environmental impact of these proposals on the ETS, both on the carbon price and on the level of emissions. Moreover, these options have been compared against the KM multi-criteria tree using two alternative ranking techniques. First, we have equally weighted the selected criteria and assessed if each policy option has a positive (+1), neutral (0), a negative (−1) impact against each criterion (Method 1). Subsequently, the criteria have been weighted to take into account stakeholders’ preferences and performance of the policy options has been graded using the scale [0,10] in order to consider the intensity of their impact against the several criteria (Method 2). Both approaches confirm the CCB as the first-best option and the national price floor as the worst, but only the second method allows us to determine an unequivocal ranking among the policy instruments where the EU price floor covers the second position. This ranking depends both on the assigned grades and on the criteria's weight coefficients estimated by KM. Since we cannot exclude a priori that the current political preferences might differ from the ones expressed by the KM coefficients, a sensitivity analysis has been developed to test the robustness of this ranking. The SA has revealed that in the best scenario the final ranking remains substantially unchanged (case 3b), while in the worst case scenario it remains unchanged for a variation up to 19% of the weight coefficients (Case 1), while further variations in the coefficients’ weights modify the ranking. The SA has also confirmed that the first-best option highly depends on political preferences. In particular, when policymakers have as a primary goal to increase the ETS’ economic effectiveness and political acceptability, then the CCB is the first-best option, while the EU price floor covers the second position (SA case 3). Indeed, by allowing for a reversible adjustment of the ETS cap according to clear, pre-defined rules, the CCB would increase flexibility in the ETS and improve both its static and dynamic efficiency, by ensuring support and stability to the carbon price. Moreover, the CCB would allow for a higher degree of harmonization within the EU and among ETS and non-ETS sectors. Against these benefits, this option is likely to bring a lower emissions reduction than other options like the −30% target. Moreover, it is likely to require a significant degree of intervention upon the current ETS framework that would imply a relatively long time-frame for implementation, as the institution of an independent CCB and the definition of clear rules for adjusting the ETS cap require a long legal procedure as well as a determined political will to do so. Given these shortcomings, when the relevance of the environment performance and implementation feasibility goals gradually increases against the political acceptability criterion, the EU price floor gains in position against the CCB. Thus, when the policymakers have a preference for an instrument that is both environmentally and economically effective and that can be adopted in the short-term with a low cost of implementation, the EU price floor constitutes the most tailored option (SA case 2). The CCB is not the most suitable policy option when the stakeholders want to mainly reach an environmental goal. In this case, the −30% target becomes the policy option they should adopt (SA case 1). Given its asymmetric impact between the country which adopts it and the rest of the ETS, a national price floor is generally classified as the worst option. Nevertheless, self-interested States looking for a feasible solution may find it to be the optimal solution. In fact, we find that if the feasibility of implementation is the main priority of policymakers, then the national price floor can even become the first-best option (SA case 2). Interestingly, the set-aside option that currently appears to be the main point of reference in the EU political agenda, does not cover the first position in any of the analyzed scenarios. Finally, in spite of not being a first-best option, the setting of long-term targets could be applied in conjunction with practically any of the options discussed and would have the benefit of supporting the current ETS as its stringency would be guaranteed into the future. ( Table 5 and Table 6).