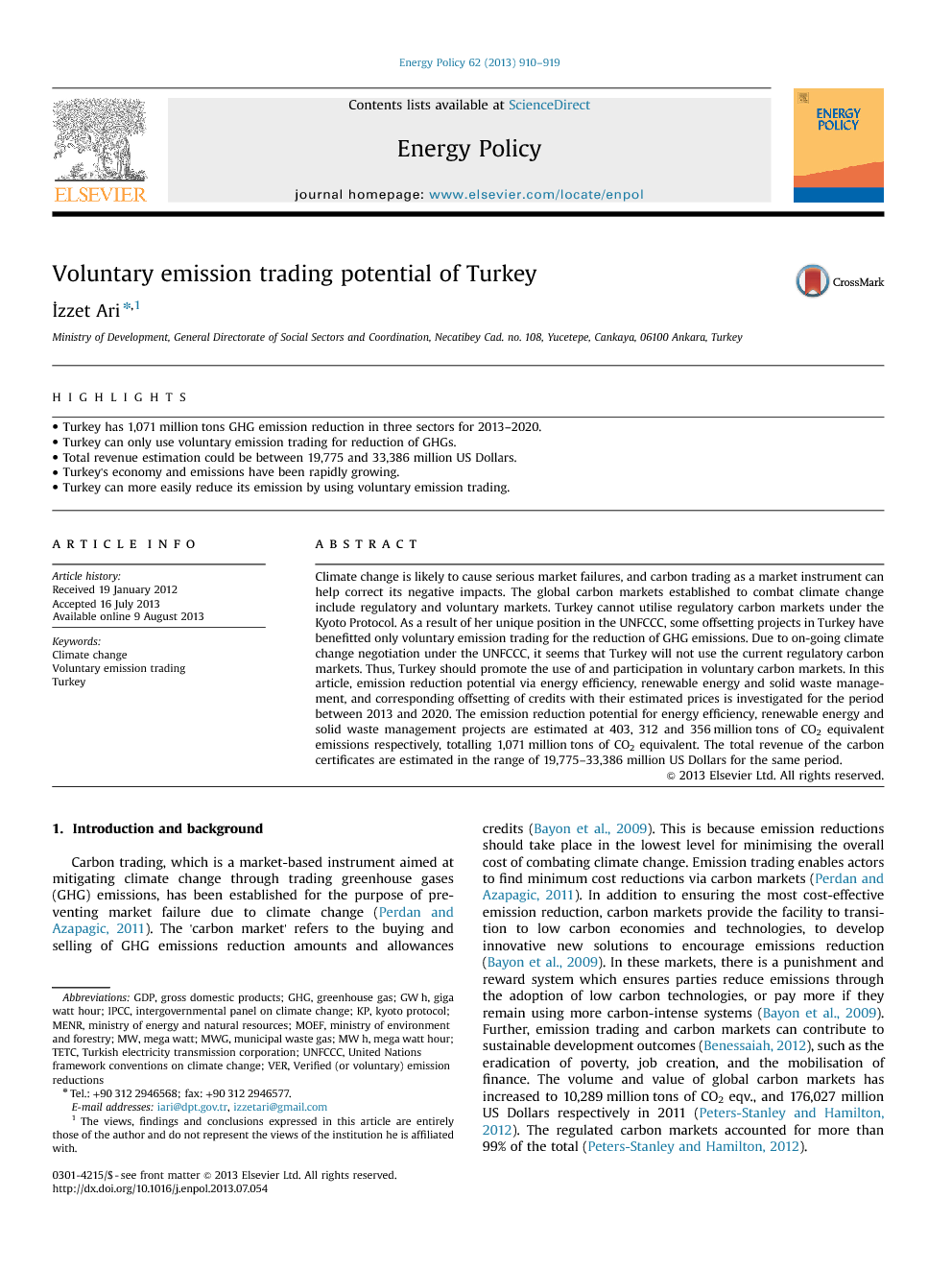 Climate change is likely to cause serious market failures, and carbon trading as a market instrument can help correct its negative impacts. The global carbon markets established to combat climate change include regulatory and voluntary markets. Turkey cannot utilise regulatory carbon markets under the Kyoto Protocol. As a result of her unique position in the UNFCCC, some offsetting projects in Turkey have benefitted only voluntary emission trading for the reduction of GHG emissions. Due to on-going climate change negotiation under the UNFCCC, it seems that Turkey will not use the current regulatory carbon markets. Thus, Turkey should promote the use of and participation in voluntary carbon markets. In this article, emission reduction potential via energy efficiency, renewable energy and solid waste management, and corresponding offsetting of credits with their estimated prices is investigated for the period between 2013 and 2020. The emission reduction potential for energy efficiency, renewable energy and solid waste management projects are estimated at 403, 312 and 356 million tons of CO2 equivalent emissions respectively, totalling 1,071 million tons of CO2 equivalent. The total revenue of the carbon certificates are estimated in the range of 19,775–33,386 million US Dollars for the same period.

Emission trading is an important tool for combating climate change via emission mitigation and correcting market failure as a result of the external cost of climate change. The global carbon markets have continued to grow since the 2000s, reaching up to USD 176 billion in 2011 (Liese et al., 2012). Voluntary carbon markets increased to USD 576 million in 2011 (Peters-Stanley and Hamilton, 2012). The first Kyoto commitment period (2008–2012) ended in December 2012 without consensus for the future architecture of climate regime (Benessaiah, 2012). It is difficult to expect a uniform international carbon markets (Lee, Lazarus, Smith, Todd, and Weitz, 2013), so voluntary carbon markets will be larger by 2020 than they are now (Bayon et al., 2009). Due to regulatory carbon markets being too slow, voluntary carbon markets can continue to help to reduce GHG emissions through increasing markets' transactions (Bayon et al., 2009). Whatever the size of regulatory markets, the buyer of VER will exist because of the outlet features of voluntary carbon markets (Bayon et al., 2009). Thus, the voluntary carbon markets continue to help for innovation, inspiration, and education (Bayon et al., 2009). Turkey tries to contribute to the mitigation of global climate change within its respective capability. Access to financial mechanisms is important for emerging economies such as Turkey. As a result, Turkey's energy consumption and emissions will continue to increase, but Turkey cannot use financial and flexible mechanisms like other emerging economies. This is because other emerging economies are not listed in Annex I of the UNFCCC in other words they are not primarily responsible for the mitigation of emissions. Thus, the unfair position of Turkey as an Annex-I country in the UNFCCC is very big obstacle preventing Turkey from benefiting from the Kyoto Protocol Flexibility Mechanisms as other non-Annex I countries have done. Therefore, Turkey could only use voluntary emission trading as a financial tool. Accordingly, Turkey is the 7th largest source of VER credits, and is a net exporter this credits (Liese et al., 2012 and Peters-Stanley and Yin, 2013). Within this context, Turkey will continue to benefit from voluntary emission trading. Turkey shows its willingness to develop a sustainable and low-carbon infrastructure when Turkey utilises carbon markets fairly (Liese et al., 2012). Turkey also investigates other alternatives in order to create finance for emission mitigation. These measures include carbon taxation, and domestic cap-and-trade systems (Liese et al., 2012). Turkey wants to use its experience in the domestic emission trading systems when current voluntary carbon projects and their VER credits can be linked with the future market-based mechanisms (Peters-Stanley and Yin, 2013). According to the results of this study, Turkey has a significant emission mitigation potential of 1,071 million tons in renewable energy, energy efficiency and solid waste management areas between 2013 and 2020. These amounts could be certificated to value the emission mitigation actions within a market instruments. The total revenue of the voluntary emission trading will be between 19,775 and 33,386 million US Dollars between 2013 and 2020. Using these revenues as a financial support to develop offsetting projects in the three sectors discussed above – emission reduction potential through energy efficiency, renewable energy and solid waste management – will ensure Turkey's cost effective emission reduction and significantly enhance this key emerging economy's contribution to the global struggle to combat climate change in sustainable ways that do not compromise economic development. To conclude, Turkey has a very considerable emission reduction potential through carbon trading in the voluntary markets. This can give a sign to policy makers in Turkey to give further considerations to the regulatory emission trading schemes in Turkey, in order to be ready for the future climate regime and its flexibility mechanisms.