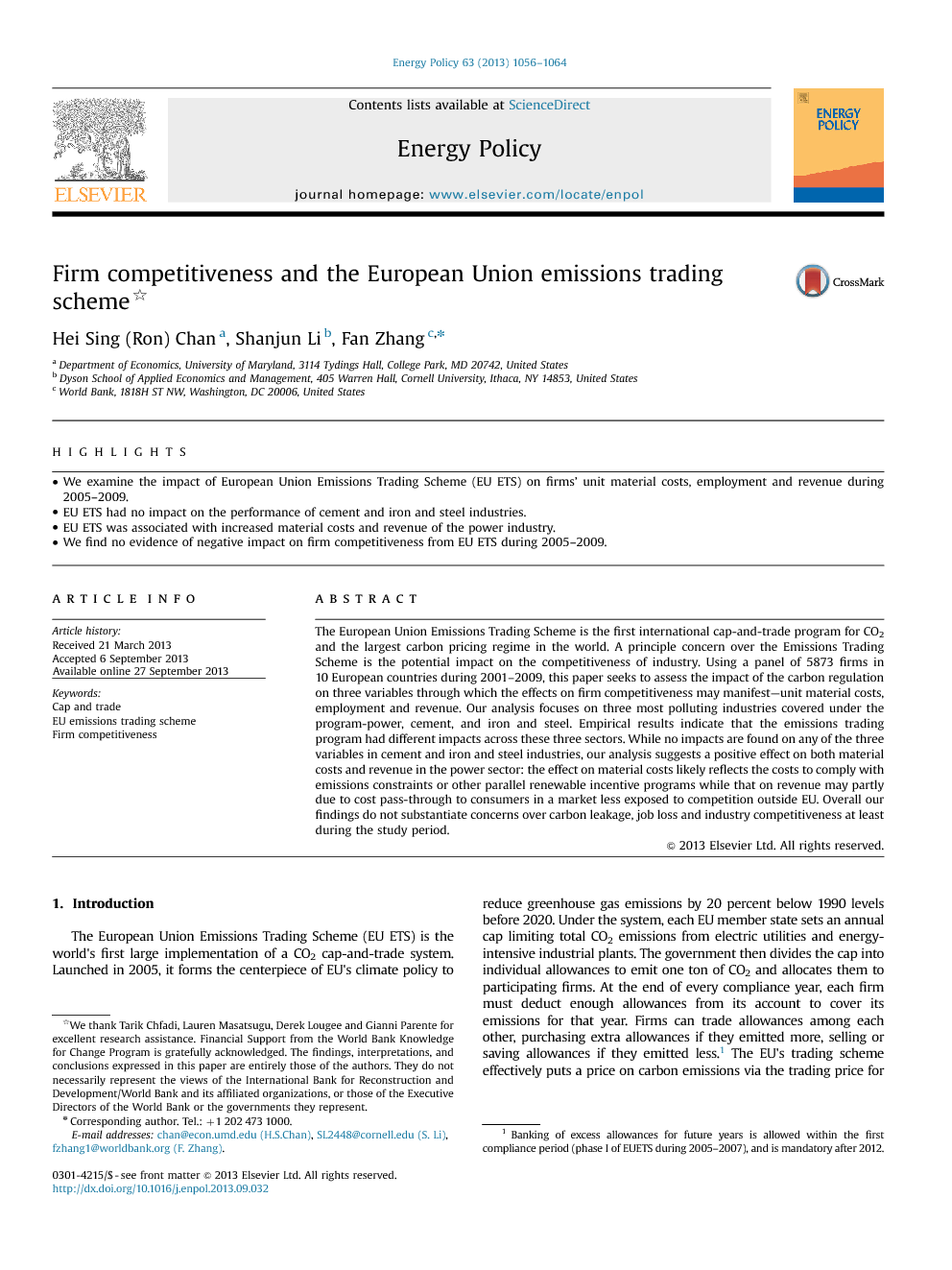 The European Union Emissions Trading Scheme is the first international cap-and-trade program for CO2 and the largest carbon pricing regime in the world. A principle concern over the Emissions Trading Scheme is the potential impact on the competitiveness of industry. Using a panel of 5873 firms in 10 European countries during 2001–2009, this paper seeks to assess the impact of the carbon regulation on three variables through which the effects on firm competitiveness may manifest—unit material costs, employment and revenue. Our analysis focuses on three most polluting industries covered under the program-power, cement, and iron and steel. Empirical results indicate that the emissions trading program had different impacts across these three sectors. While no impacts are found on any of the three variables in cement and iron and steel industries, our analysis suggests a positive effect on both material costs and revenue in the power sector: the effect on material costs likely reflects the costs to comply with emissions constraints or other parallel renewable incentive programs while that on revenue may partly due to cost pass-through to consumers in a market less exposed to competition outside EU. Overall our findings do not substantiate concerns over carbon leakage, job loss and industry competitiveness at least during the study period.

The EU ETS is the fi rst international cap-and-trade program for CO 2 and the largest environmental pricing regime in the world ( European Commission, 2012 ). Covering more than 12,000 power stations and industrial plants in 30 countries, it is slated to fi nish its second phases and to further expand to more industrial sectors such as petrochemicals in 2013. Understanding the impacts of such a large scale environmental intervention on fi rms is impor- tant not only because it is a critical step to examine the cost- effectiveness of the program itself but also it can provide useful lessons for other countries and regions who are contemplating cap-and-trade programs such as China and India. While there exists a large literature on the U.S. SO 2 allowance trading program, the world's fi rst (and now virtually collapsed) large-scale cap-and-trade program, empirical studies on the EU ETS program is much scarcer. Our paper adds to this literature by investigating the impacts of EU ETS on material costs, employment and turnover for three main sectors: electric power, cement, iron and steel. The program impacts on fi rms by EU ETS can be at best described as limited and isolated among the three sectors ana- lyzed during the fi rst phase (2005 – 2007) and the fi rst part of the second phase (2008 – 2009). Our preliminary analysis showed only statistically signi fi cant effect on material costs and turnover among power plants and none were detected on any of the three variables of interests in cement, or iron and steel fi rms. Because the power sector as a whole was with a net short position of emission allowances, we conjecture that the increase in material costs among electric power fi rms could be linked to compliance costs associated with allowance purchasing and/or fuel switching from coal to natural gas. The rising material costs could also re fl ect the costs to ful fi ll obligations under the parallel renewable incentive programs which require utilities to purchase power from renewable resources at a price higher than the market price or to purchase tradable green certi fi cates. The exact mechanism is however unlikely to be identi fi ed under the current analysis given the limited data availability. The increase in turnover in the second phase could partly re fl ect the cost pass-through to consumers in a market less exposed to competition outside EU. Our fi nding of no impacts for cement and iron and steel sectors suggests that concerns over carbon leakage, job loss and industry competitive- ness are not substantiated at least during the study period. Lastly, the varying impacts underscore the validity of the sector-by-sector empirical approach.It is important to note that these fi ndings should be viewed in concert with the speci fi c program period analyzed. As discussed in our introduction, the fi rst phase of the EU ETS is a trial phase where abundance of allowances was allocated. Although the second phase aimed to reduce the CO 2 emissions by 6.5 percent below the 2005 level, the economic recession made the goal easier to achieve. In the future, we plan to extend the research in at least the following two directions. First, while we have analyzed material costs, employment and turnover so far, we have not examined the impact on fi rm pro fi t yet. Second, we plan to include data from 2010 to 2012 in our analysis so that we can get a more complete picture of the impacts of the second phase of the program.