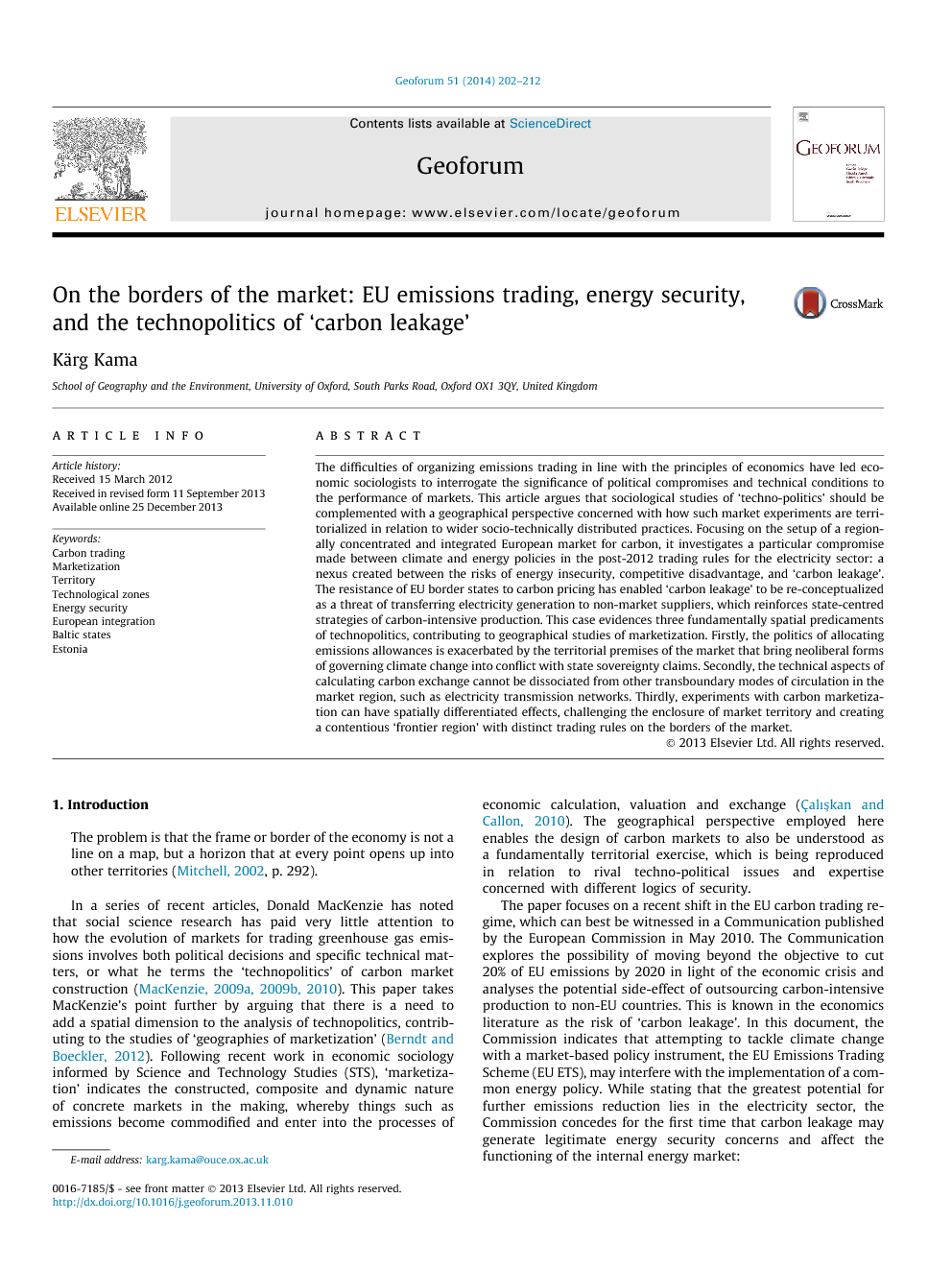 The difficulties of organizing emissions trading in line with the principles of economics have led economic sociologists to interrogate the significance of political compromises and technical conditions to the performance of markets. This article argues that sociological studies of ‘techno-politics’ should be complemented with a geographical perspective concerned with how such market experiments are territorialized in relation to wider socio-technically distributed practices. Focusing on the setup of a regionally concentrated and integrated European market for carbon, it investigates a particular compromise made between climate and energy policies in the post-2012 trading rules for the electricity sector: a nexus created between the risks of energy insecurity, competitive disadvantage, and ‘carbon leakage’. The resistance of EU border states to carbon pricing has enabled ‘carbon leakage’ to be re-conceptualized as a threat of transferring electricity generation to non-market suppliers, which reinforces state-centred strategies of carbon-intensive production. This case evidences three fundamentally spatial predicaments of technopolitics, contributing to geographical studies of marketization. Firstly, the politics of allocating emissions allowances is exacerbated by the territorial premises of the market that bring neoliberal forms of governing climate change into conflict with state sovereignty claims. Secondly, the technical aspects of calculating carbon exchange cannot be dissociated from other transboundary modes of circulation in the market region, such as electricity transmission networks. Thirdly, experiments with carbon marketization can have spatially differentiated effects, challenging the enclosure of market territory and creating a contentious ‘frontier region’ with distinct trading rules on the borders of the market.

Discussed in light of recent sociological studies of carbon marketization, the evidence provided above leads to several con- clusions. Most importantly, the paper affirms that the performativ- ity thesis should be complemented with a focus on wider political and technical constituents of marketization as an indeterminate process which can assume different courses across both time and space. Rather than representing a strong case of economic ideals coming true, the post-2012 ETS rules were grounded in earlier trials of strength in debates over market efficiency and other matters of concern, such as national energy policy. The rhetoric of ‘carbon leakage’ adopted by state governments further involved mobilizing energy security arguments as generative discursive and territorial practices that lead to novel calculations and market realities when credited by existing material and technicaldependencies. Although the Commission is said to have taken ‘epistemic leadership’ in designing the scheme ( Skjærseth and Wettestad, 2010b ), the re-conceptualization of ‘leakage’ was possi- ble due to the activity of the ‘economists in the wild’, in particular government and industry representatives, thereby lending support to the contention that carbon markets are co-performed, involving economic as much as non-economic expertise ( Callon, 2007 ). MacKenzie’s ‘technopolitics’ offers a helpful starting point for rethinking the politics of performativity. However, the paper showed that ‘politics of allocation’ cannot be detached from wider disagreements and disjunctures that pervade the economization of carbon in its material forms of both emissions and energy. Re-reading MacKenzie’s work geographically directs attention to broader tensions between different modes of political rationality based on territorial autonomy and market-led governance. The new member states’ resistance to carbon pricing falls within the former domain, except that such ‘territorial logics’ were not unilat- erally bound to the strategies of national governments. Rather, ter- ritoriality was coded into the market experiment from the outset, since the enclosure of emissions within the EU economic territory brings neoliberal rationalities of government continuously into conflict with state sovereignty and related modalities of security. Moreover, such territorial premises may generate specific forms and dynamics of marketization when applied to distinct socio- technical and material contexts. Although Callon and MacKenzie conceptualize markets as socio- technical assemblages, they tend to explain market diversity primarily with the relational effects of human interaction with the devices that mediate calculation. The above analysis suggests, however, that technopolitics may also span other socio-technical structures, in this case electricity gener- ation and transmission systems. Such path-dependent technologi- cal networks do not amount to market devices, but nonetheless affect emissions calculation. Being made central to national energy policy and articulated through the technopolitics of ‘leakage’, they perform as a ‘rival calculative regime’ that cannot be ignored in the reconfiguration of the European carbon economy. Furthermore, their presence renders visible the difficulties of singling out a clearly-bounded market territory. The reality of transboundary carbon exchange challenges the performative distinction between market and non-market domains and effectively creates a conten- tious ‘frontier region’ on the territorial borders of the market, which is not reducible to ‘transition’, notwithstanding the agenda of harmonization. In this way, the paper highlights further avenues of collabora- tion between the sociology of marketization and geographical re- search. It leaves open the question of the degree to which agency should be ascribed to the electric grid itself ( Bennett, 2005, 2010 ). After all, the ‘‘electricity leakage’’ risk was skilfully orches- trated by the Estonian government, who mobilized a narrow defi- nition of security as independence from Russian supplies, which in turn was rooted in earlier geopolitical discourses and prolonged resistance to energy market liberalization in the region. This defi- nition was only partially facilitated by the physical infrastructures inherited from the Communist era, whereas the resulting market territory remains contentious and prone to reconfiguration. A de- tailed discussion of ‘distributive agency’ in assemblages is beyond the scope of this analysis, but it would certainly be a mistake to ex- plain the case in terms of technological determinism, especially if infrastructure, like territory, is regarded as a relational concept embedded in other forms of human organization and technological structures ( Star, 1999 ). Having long studied territoriality, borders and networks, geog- raphy has the conceptual tools to investigate how marketization can have spatially consolidating effects, while still taking divergent courses and generating uneven economic geographies. Future re- search could therefore engage with STS and economic sociologyby studying empirically the ways in which markets are both spa- tio-temporally specific and geographically distributed assem- blages. Worldwide experiments with the creation of new carbon economies provide ample opportunities for such collaboration.